While heading to the beach for a family day in the sun has its appeal, it’s often not very convenient. For that reason, there are few better ways to cool down during the summer heat than with a water balloon fight. Every time these water-filled balloons hit the target, they provide a dose of relief, in addition to providing a fun way to spend time with friends and family. So if you and your crew are bored of sitting inside and ready for an action-filled water balloon fight, read on to find out how to make the most of it.

One of the great things about water balloons is that they are simple. So long as you have balloons and a faucet to fill them with water, you have everything you need for your water balloon fight or water balloon dodgeball game to commence. However, for those looking for a water fight with a little extra spice, it’s worth considering adding a few more bits of weaponry to your aquatic battle. Here’s our breakdown of how to throw the best water balloon fight ever:

Whether you’re throwing a water balloon fight for your kids or you want to entertain your friends with some child-like fun, we’ve rounded up the best tools to help you do so. From balloons to water guns, buy one or more of the water balloon products below for some epic summer fun.

When it comes to the best water balloons, Bunch O Balloons are king. Their advanced, award-winning, fast-filling, self-sealing design means you’re ready to get wet in a matter of minutes. This pack contains 420 balloons made up of 12 35-piece bunches. Their user-friendly nature makes them ideal for all kinds of social occasions, including picnics, pool parties and water fights. Plus, the fact that they’re biodegradable and recyclable means your environmental conscience can rest easier, too. Don’t you wish you had these when you were a kid?

If you just want a taste of the action and aren’t looking for all-out conflict, this personal pack of Bunch O Balloons Water Balloons may be better suited to your needs. Inside you’ll find 100 of Bunch O Balloons rapid-filling, self-sealing balloons, giving you just the right amount for small-scale backyard water fights or other water balloon game fun. These balloons also come in a range of color options with packs made up of orange, blue and green or pink, purple and white. 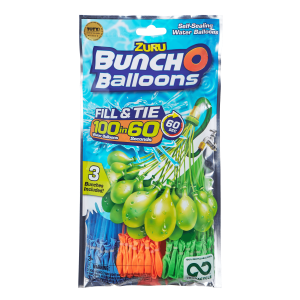 If you’d like to try and avoid any potential conflicts that may arise when kids are involved in water balloon fights, you may want to switch your “fight” to a game of smash the water balloon with a bat instead. While this Franklin Sports MLB Authentic Plastic Bat Set does include a lightweight ball which can be enjoyed on less sunny days, it’s great for smashing through water balloons that have been teed up. On contact, the balloon explodes, delivering a dose of water over both the batsman and surrounding participants.

If you don’t like the idea of a one-time-use water balloon, you may prefer to choose these Prime Time Toys The Original Splash Bombs. While you do sacrifice that sought after impact explosion that makes a direct hit so rewarding, you will be able to use these soft foam water bombs over and over again. This benefit also allows for a water fight which isn’t limited by a finite amount of balloons in your arsenal. Additionally, they are great for swimming pools and general backyard fun, and they are made from a non-toxic material which is highly absorbent. 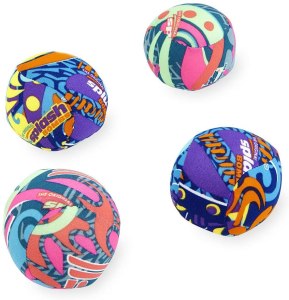 This Korlon Water Balloons Pack is filled with 1,200 versatile balloons that come with accompanying rubber bands and three injectors and tool tubes for easy filling. This allows you to use the balloons for a range of activities and games as well as the classic water balloon party. The biodegradable, high-quality latex balloons come in a range of different colors, including yellow, blue and pink. For water balloon parties, they can be filled the night before your fight without worry of them unexpectedly popping. Additionally, the large quantity supplied in the pack ensures you’ve got plenty of ammo for the impending conflict. 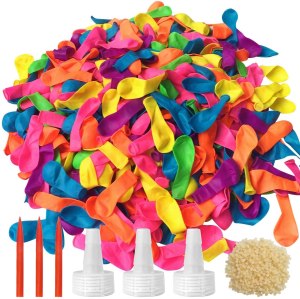 The AzBoys Small Latex Water Balloons are classic water balloons. Their compact size and quality construction help to ensure they’ll reach their target before exploding. This pack contains 1,000 balloons, which is more than enough for some summer cool down fun. The balloons are also made from a biodegradable latex and come in a range of vivid colors for added visual enjoyment. 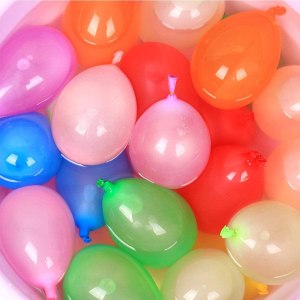 If you’re really looking to win a water balloon war, you’re going to need the tools to hit your enemy from as far away as possible without taking fire yourself. Step in the TiMi Tree Water Balloon Launcher. Even if your garden doesn’t measure 500 yards in length, knowing you’ve got that firepower in your arsenal will breed confidence through the ranks. The downside is that the launcher does require three people to function, meaning you’ve got two fewer sets of hands launching balloons when it’s in use. Alternatively, for a little less conflict-orientated fun, this launcher is just a great way for friends to see exactly how far they can launch a water balloon.

Please note that this is most definitely not a safe addition to a free-for-all kid’s water balloon party. This should only be used with close adult supervision. 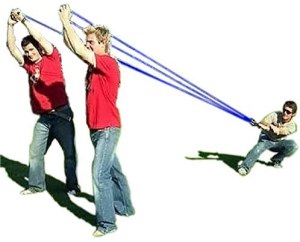 If you only have one-time-use balloons, you know that eventually you’re going to run out of ammo. In these cases, it’s always a good idea to have a backup plan, which is why we suggest having the Max Liquidator Water Blaster Set in your back pocket. This colorful set of six blasters lets you use surrounding water sources to keep the party going. They are made from a high-quality foam, meaning they’re also great for pool use, too. 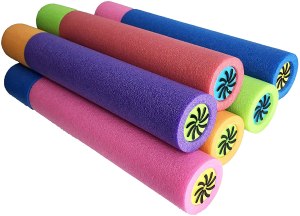 If you’re going to have children in the back yard armed with water balloons, it’s probably best you have a way to restore order should things get out of hand. While diplomacy is one option, another is this NERF Fortnite Rl Super Soaker Water Blaster. Inspired by the blaster found in Fortnite, the popular video game, this precise water weapon holds up to 9.3 ounces of water and lets you exert your authority in the backyard water fight domain. It’s also easy to fill and comes recommended by over 90% of Amazon users. 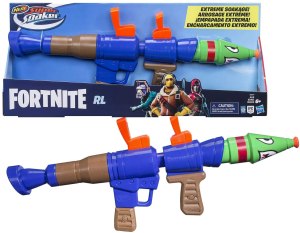 The Bunch O Balloons Water Balloons ZURU Slingshot is a great option for anyone looking for a balloon-launching device for the backyard battlefield. From the makers of the Bunch O Balloons kit featured above, it’s capable of launching balloons up to 100 feet and comes with ammo in the form of 100 self-sealing, rapid-fill water balloons. Unlike many of the competing slingshots, this one can be manned by a single person as you simply draw the string backward, aim and fire, offering greater freedom to move during a battle. It’s also much more kid-friendly than larger slingshots. 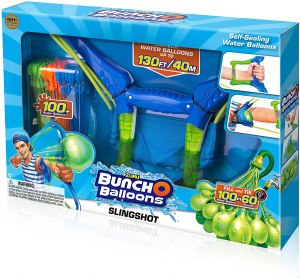 If you have kids who love playing in water but aren’t really of an age where taking a water balloon to the head is appropriate, you may want to consider adding this Dillitop Elephant Sprinkler to your setup. While water balloons are flying all over the place, neutral parties will love running in and around the water jet delivered by this elephant-shaped sprinkler. This is especially great for young kids as the inflatable elephant sits just shy of two meters tall, creating a gentle shower-like experience to be enjoyed in the backyard. 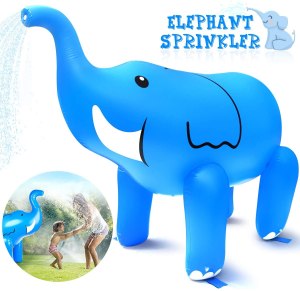 If, when all the water balloon throwing is over, you’re still looking for some water-based fun to cool off with, consider this Wow Sports World of Watersports Super Slide. This slip-n-slide sports a patented design that uses a zig-zag spray pattern sprinkler system to ensure a clean ride all the way. It easily connects to most standard water hoses and is made from an extra-thick, heavy-duty PVC for added durability and a quality feel. Furthermore, this impressive backyard addition includes two sleds that act to soften the impact on the ground and provide a more friction-free ride. 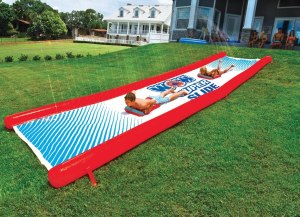 The Best Balloons for Taking Your Celebration to the Next Level