It’s a good time to be a Star Wars fan. From the number of movies and TV shows recently released to the numerous others currently or soon to be in production, viewable and readable Star Wars content has never been more abundant or easier to access. With that in mind, Halloween dress parties across the country are likely to be filled with plenty of fans donning some of the best Star Wars costumes out there.

Given the breadth of movies, books, and TV shows available, it’s little wonder that the Star Wars universe is full of hundreds of viable Halloween costume ideas. There are plenty of popular characters from outside of the nine movies in the Skywalker Saga to be celebrated, too. And we’re not just talking about Solo: A Star Wars Story or Rogue One: A Star Wars Story, either. When it comes to eye-catching, childhood nostalgia-filled costumes, our favorites include:

If you’re looking for scary Halloween costumes, the Star Wars universe isn’t your best bet. But for Disney costumes, kid’s costumes and family costumes, there are tons of great options from Star Wars.

Below, you’ll find our top 11 Star Wars costume ideas. We’ve included ideas for adults and kids as well as an option for the family pet. Find yours and enjoy a day or evening playing out the galaxy far, far away’s greatest and most memorable moments.

A full Jedi robe is a versatile fancy dress option for any Star Wars fan. And given Luke Skywalker’s recent appearance in The Mandalorian, and the new Obi-Wan Kenobi series on the horizon, dressing up as the galaxy’s greatest protectors has rarely been a more popular option. Each set included in our list is well-reviewed and comes with multiple pieces including a tunic, belt, and pair of pants. They also come in a range of different sizes to fit all the family. The costume also comes in multiple colors, allowing you to choose the set corresponding to your favorite Jedi. Furthermore, it’s possible to purchase the tunic or robes separately if you’re looking for a more basic outfit.

If you’re truly looking to deck out the whole family in some form of Star Wars getup, you’re going to need an outfit for the dog, too. The Rubie’s Star Wars Classic Jedi Robe Pet Costume is a great choice as it comes in four different sizes to accommodate a range of dog breeds and sizes. The officially licensed costume is made up of a brown cloak with an attached hood, a tan shirt, and a belt for a more secure fit. 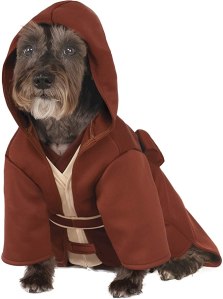 One of the bright lights to come from the new Star Wars trilogy was the introduction of the Force-talented, Millennium Falcon-piloting Rey. This Costumes USA The Force Awakens Rey Costume comes in small, medium, and large sizes to allow girls young and old to take on the mantle of Emperor Palpatine’s wayward granddaughter. The costume is inspired by Rey’s desert scavenger outfit and includes faux wraps, a hook-and-loop closure, and elastic hems. Try adding a belt and arm wraps to complete the look.

There are only two characters who appear in all nine of the Skywalker Saga movies — C-3PO and R2-D2. With this Rubie’s Children’s C-3PO Classic Star Wars Costume, your son or daughter can transform into everyone’s favorite protocol droid. The costume is made of a metallic-looking jumpsuit that sports foam detailing, along with gloves, a hood, and a half mask. If you have a second child to dress, try pairing it with this Princess Paradise Star Wars R2-D2 Toddler Costume.

If you’re looking for a parent and baby costume combo, it’s hard to look beyond the Mandalorian and Grogu (also known as the Child). This pairing’s rise to fame has been legendary among Star Wars fans, so much so that the third season of The Mandalorian is its most anticipated. In this officially licensed Star Wars Baby Mandalorian The Child Costume, you’ll find everything you need to deck your child out in Grogu-inspired gear from head to toe. The kit includes a long-sleeve robe with hand covers and a headpiece with ears and a chinstrap. 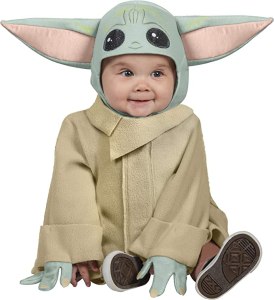 Few characters have made as big an impact on the world of Star Wars as Pedro Pascal’s The Mandalorian. With his faithful sidekick Grogu in tow, fans have enjoyed every minute of Mando’s quest to return Grogu to wherever he belongs. In this Rubie’s Star Wars The Mandalorian Beskar Armor Costume you’ll be able to assume the role of the Beskar-wearing Mandalorian. The costume is made up of a padded jumpsuit with attached shoe covers, a cape, and a half-mask helmet. Unsurprisingly, this outfit is ideal for pairing with a Grogu costume-wearing companion. 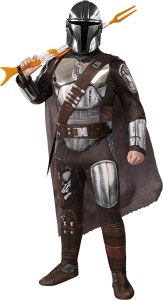 There aren’t many characters in Star Wars as instantly recognizable as the Empire’s elite shock troops, also known as Stormtroopers. Any fan of the franchise will get something from stepping inside this shiny white Stormtrooper armor, which is inspired by the classic style from the original trilogy. The outfit is made up of a molded chest piece, arm guards, a belt, and a mask. It also comes in a range of different sizes and looks even more convincing when paired with a replica blaster.

With this Rubie’s Star Wars Classic Deluxe Princess Leia Costume on, you’ll be able to act out one of the franchise’s most iconic lines (“Help me, Obi-Wan Kenobi. You’re my only hope…”). The costume itself is made from a 100% polyester material. The hooded dress includes a pull-on closure for secure fitting and comes supplied with a belt and a wig. It’s a great option for parties, Halloween, and cosplay events and is easily completed by the addition of a pair of white boots. 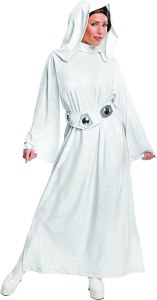 Poe Dameron proved himself to be one of the galaxy’s most capable pilots. You can choose to take on his specific look with this Xcoser Poe Dameron Deluxe Costume or simply use it to take on the appearance of any Rebel pilot. The outfit is available in a range of different sizes and comes with a jumpsuit, vest, and braces. For a more complete look, try adding Poe’s flight helmet, or Luke Skywalker’s flight helmet if you’re a bigger fan of the original movies.

While it may have been a nice ending to see Ben Solo step away from the Dark Side, it’s hard to deny that he didn’t look a lot cooler when he was dressed all in black. This Xcoser Men’s Kylo Ren Cosplay Costume lets you step into Kylo’s stylish, Vader-inspired outfit to play out your dreams of ruling the First Order. It’s made up of multiple pieces, including a tunic, a hooded cloak, a belt, and a pair of gloves. For the most realistic look, add a high-quality replica of Kylo’s unique crossguard lightsaber. 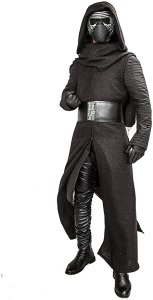 There isn’t a true Star Wars fan who hasn’t dreamed of owning their very own Darth Vader outfit, complete with a built-in voice changer. In this Rubie’s Supreme Edition Darth Vader Costume you’ll have a comprehensive costume worthy of the best parties and conventions. The kit includes a faux-leather bodysuit, injection-molded chest armor, skin guards, a pair of gloves, a helmet set, and a voice-changing device. To complete this eye-catching outfit, add a high-quality version of Vader’s crimson lightsaber. 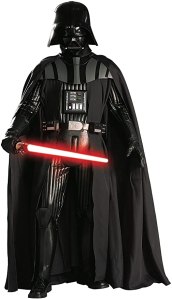 The Force Is Strong with These 12 Star Wars LEGO Sets