After spending my entire life living on the East Coast of the United States, this past May I packed up my Brooklyn apartment and officially became a Midwesterner. Howdy from Chicago!

Though the move was exciting, the process of moving was an absolute pain. I naively went with the very first moving company that reached out to me and didn’t look at reviews until after I made my first payment. I know, it was dumb. Needless to say, I wouldn’t recommend the company to my biggest enemy. But, when my furniture finally came, everything surprisingly arrived in one piece. That is except for one thing: my bed frame. I was sleeping with my new mattress-in-a-box directly on the floor for way longer than I’d like to admit.

Funnily enough, I had been getting Instagram ads for bed frames for months before my move, almost as if my phone knew that my movers were going to lose my previous frame. There were many gorgeous bed frames trickling through my Instagram feed, but there was one bed frame that stopped me in my tracks every time it appeared — “The Bed” from a brand called Thuma.

Visually speaking, Thuma’s “The Bed” is a minimalist’s dream. It’s a simple, sultry wooden frame without any eclectic details that, to the eye, looked incredibly sturdy. But, that was absolutely not the standout. The standout was that the frame called for zero nails, zero screws and is fully assembled by placing wooden beams together in the format of a puzzle.

From videos of the frame, I was reminded of Lincoln Logs, the building toy that uses tiny, notched wooden logs to help kids build miniature log cabins. Why? Because Thuma uses the same concept by providing notches in the design. And, as someone who does not trust themselves with a screw gun, this felt like the perfect option for me. So, I reached out to Thuma and they were kind enough to provide a bed frame I could put together and test myself. Has it lived up to my expectations? Find out for yourself below.

The Bed from Thuma Design

This bed frame from Thuma is designed to be the easiest (and the last) bed frame you’ll ever have to put together. It uses heavy-duty, repurposed wood that’s extremely well manufactured. Visually, each piece of wood is different through distinctive wood grains and knots that can be seen throughout with either a walnut or natural coloration. The wood has little notches that click together and hold together sturdily for years to come.

In addition to the frame, The Bed comes with cushion-coated slats which diminish the need for a box spring as well as a pillow board that looks quite like a large throw pillow. All of this is held together by two twist-in screws, meaning no tools are needed whatsoever. There are four legs that hold the bed frame through added notches as well and even a center leg that supports the middle of the bed.

Assembling The Bed from Thuma

Prior to receiving The Bed, I was told that it would arrive in three different packages. That said, it was possible that they would not arrive together, but for me they luckily did. The packages are labeled which to open first and which to open last, making it helpful for those living in smaller spaces that don’t want various bed pieces strewn across their bedroom floor. 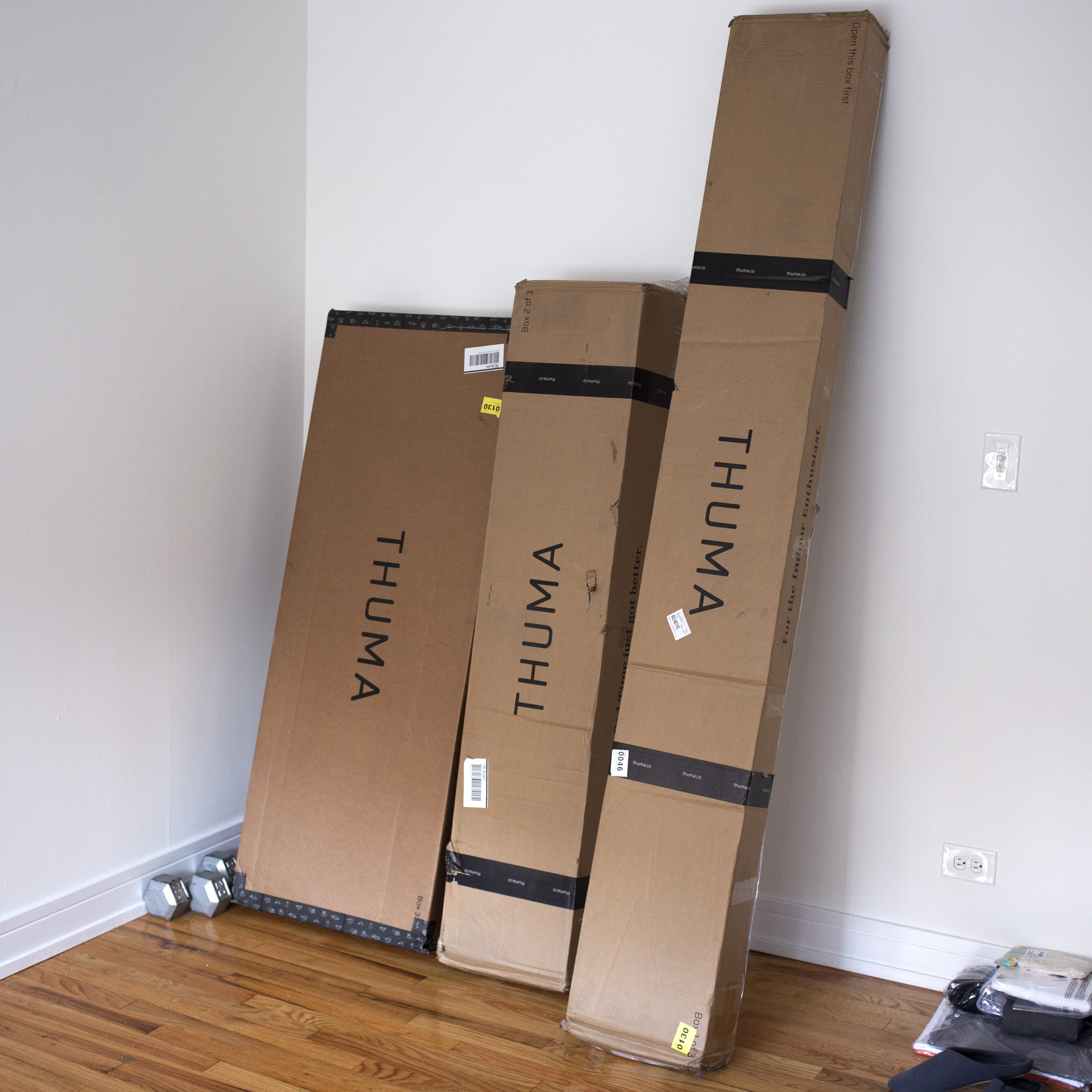 I was also told that The Bed would take five minutes to assemble. As someone who unintentionally makes everything way more complicated than it has to be, I wasn’t buying it. So, after tearing open box one, I set a timer and got to work.

The first box contained five wooden beams, a center leg, two screws and no directions whatsoever. I’m not sure if this is the case for everyone purchasing The Bed, but I will say, no directions did make me a bit nervous. Sure, the task seemed simple and maybe reading directions would make me think way too hard, but not having them kind of felt like I was assembling the bed in another language — even though there was no language to be had. But, I trusted my gut, clicked the five beams together, laid them on the floor and opened box number two. This took me around a minute maximum.

Box two contained four legs and the slats to roll on after the frame was standing. I was working solo, so it was difficult to lift the frame and get the legs on, but I managed in just two minutes total. The legs have the same little notches that the frame has to help them easily fit inside of one another. I was worried it would feel a little wobbly upon placing them together, but this wasn’t the case at all. The frame felt sturdier than sturdy. I then twisted the center leg into the middle beam, twisted both screws into the sides of the frame and was ready to lay the slats down.

I thought the beams were heavy, but wow, the slats were something else. This was most certainly difficult to line up properly as one person, but I managed to do it in just a few seconds. The hardest part was simply picking it up. I then threw my mattress on top, opened the last box that solely contained the headboard, laid that in the back and voila. I was done. Four minutes and 53 seconds later. I was certain I did something wrong, but I didn’t. The bed frame was put together completely and I barely broke a sweat.

Sleeping on The Bed from Thuma

My last bed frame was on wheels. It was constantly moving in my sleep. So much so, that there would be times I would wake up in the middle of my room in my last apartment thinking, “how the hell did I get here?” Sleeping on The Bed from Thuma is like sleeping on a comfortable boulder. It simply doesn’t move. The mattress has stayed in the same position on top of the slats as it has since I dropped it on top. The headboard (which quite literally is not attached by anything, just the pressure between the wall and the mattress) has also not moved once. I was worried about this at the beginning given that there was no way to technically attach it, but it seriously has not moved. Also, as the most important part, I’ve been sleeping like a complete baby. And that’s even with drunk Chicagoans screaming in the middle of the street at night.

And, while my apartment (and especially my room) is in nowhere near finished, here’s what my bed looks like on top of The Bed from Thuma below. 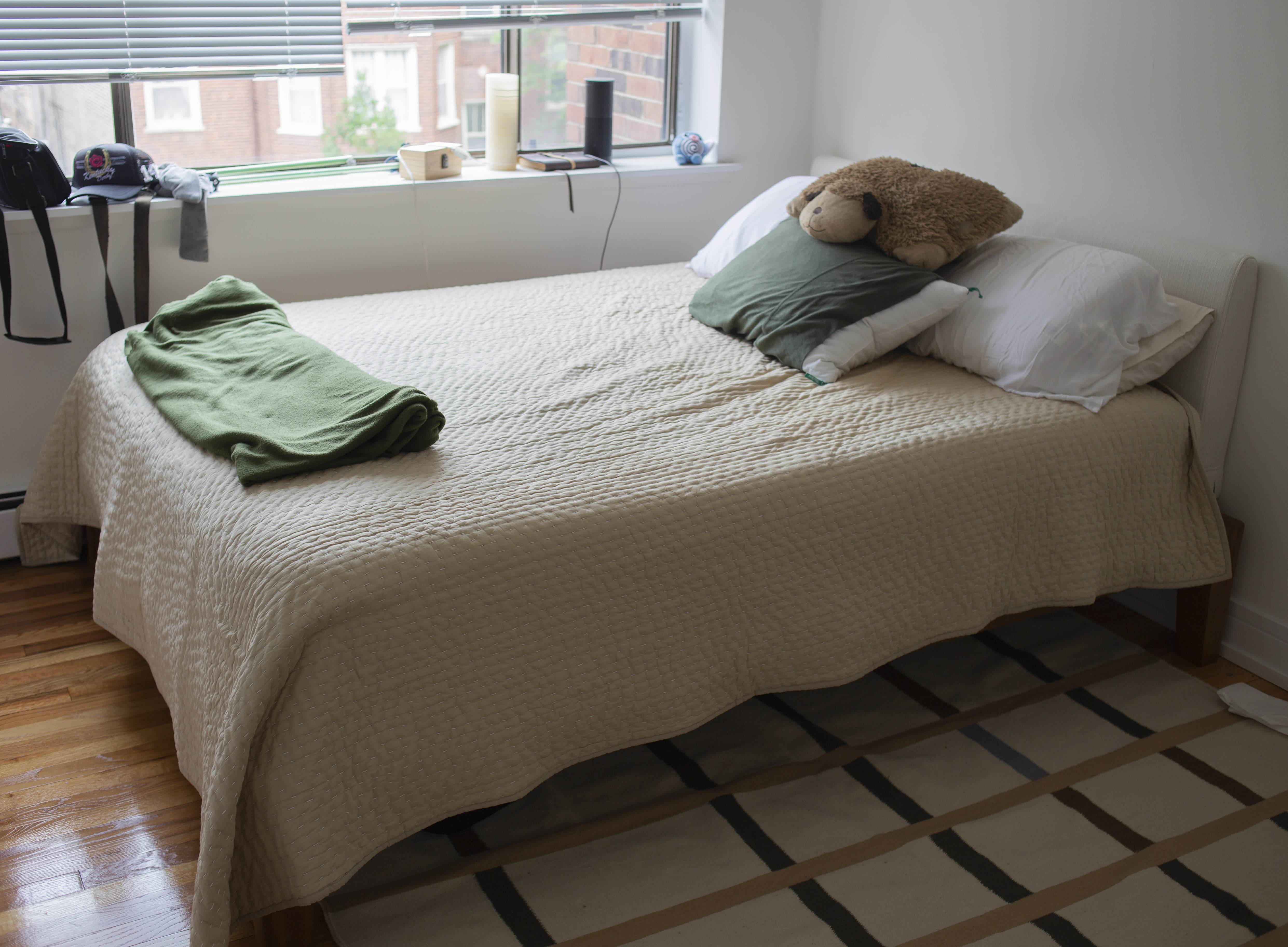 Tyler’s bed on The Bed from Thuma Tyler Schoeber | SPY

Issues With The Bed from Thuma

I’m going to be honest and tell you that I’ve had no issues except for one — and this is more of a me issue than anything. The bed is so damn heavy that it is borderline impossible to move from the spot you set it up in. I initially had my bed in the middle of my room because I decided I am an adult. Then, I decided because I am an adult, I can have my bed anywhere my adult mind wants it to, so I tried shoving it into the corner of my room. When I tell you that was my workout for the day I mean it. Boy, was that tough. I would have needed at least two more versions of myself for that to have gone in any way smooth.

In addition, I can’t stop looking at Thuma’s website for matching items to place in my bedroom. The Nightstand? Mouthwatering. The Side Table? Jawdropping. Hell, even the mattress looks so cozy it’s making me rethink the one I currently have. I’d say Thuma is borderline dangerous for the fact that I love The Bed so much, I now want everything else.

The Nightstand & The Side Table from Thuma Courtesy of Thuma

The Nightstand from Thuma

The Side Table from Thuma

The Verdict: Should You Buy The Bed from Thuma

Yes. One hundred percent yes. The Bed is the sturdiest, easiest, best-looking bed frame I will ever own and I’m sure of it. Putting it together by myself was essentially an effortless task that took almost no time at all away from my life. It’s beyond structurally sound and sits like an absolute tank in my bedroom. Visually speaking, it’s so minimal that it can sit in any interior space without sticking out like a sore thumb. Plus, taking this apart will be a breeze if you have to move homes or relocate the bed in the future.

Thuma expresses that this will be the last bed frame you’ll ever have to buy and after my experience with it so far, I 100% believe it. This will be the bed frame I sleep the rest of my life away on, create memory after memory on and watch way too much Netflix on. All in all, this is a bed frame you’ll surely feel you made the right decision purchasing. 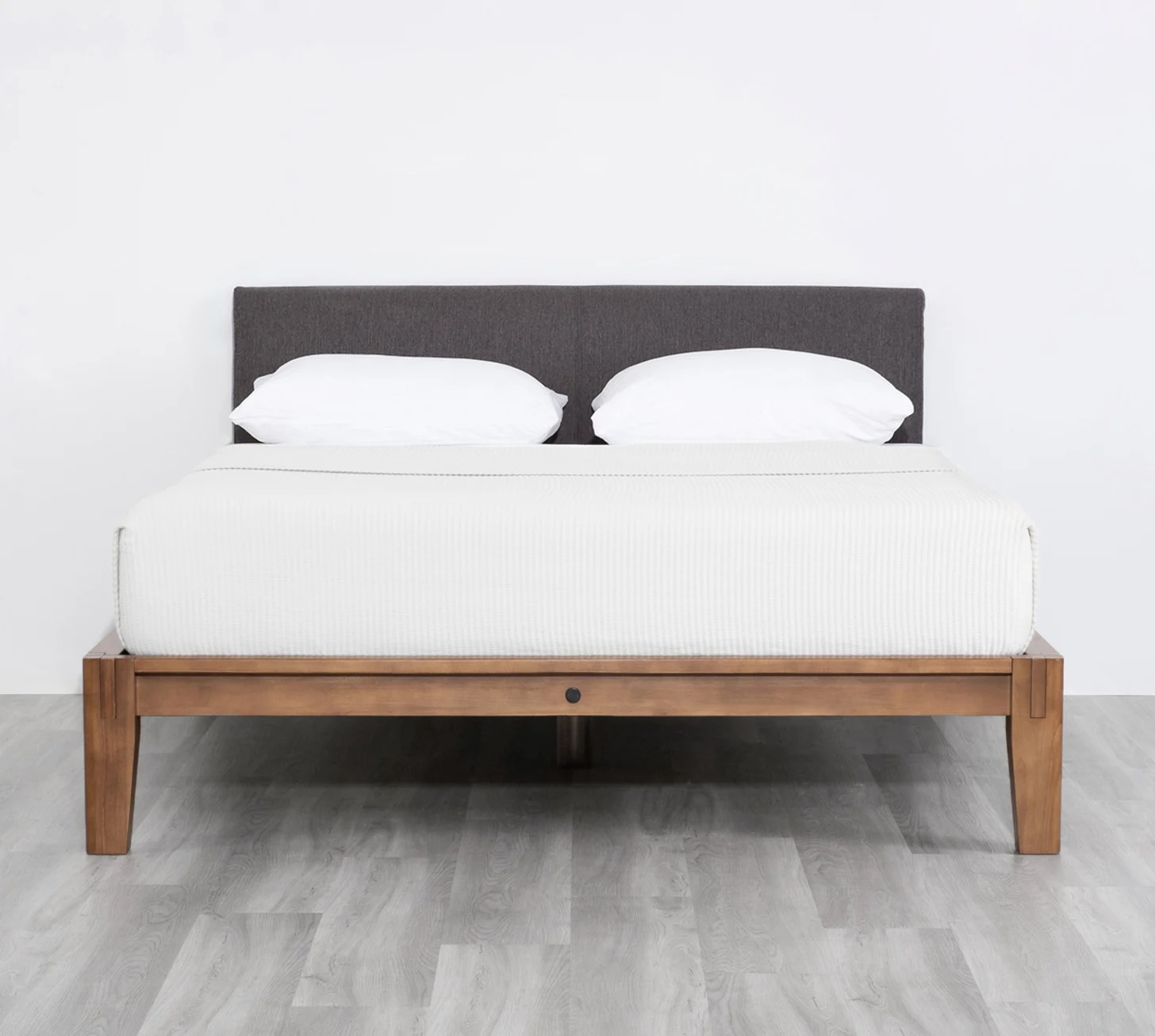