From keeping your home cool during the hotter months to ensuring air is circulating year-round, a tower fan is a cost and energy effective addition to any home or office. As explained by HomeGuides.com, a tower fan is most potent when used in conjunction with air conditioning since the tower fan is designed to move the cold air to your skin faster, in turn helping to cool you down at a more rapid pace. But if you’re in a home or space without air conditioning, a tower fan will still provide some relief.

Tower fans are not only an efficient way to quickly move cold air closer to you, but they also help decrease energy costs. Air conditioning can be used at a lesser rate thanks to tower fans, which pick up some of the slack of the AC’s lessened power output. The energy used to power the wall outlet that the tower fan is plugged into is significantly less expensive than running an air conditioning unit, which saves homeowners money in the long run.

We also like using tower fans as a way to concentrate on the area that we want to cool. Rather than cooling the entire house, tower fans can be placed only in the rooms we’re using, for example, by putting in bedrooms at night to make for a more comfortable sleeping environment.

For homes and apartments, RVs and dorm rooms, offices and garages, these three tower fans are great for circulating and cooling air.

Thanks to a built-in handle, the Lasko Wind Curve Portable Electric Oscillating Stand Up Tower Fan is easy to move between rooms, going wherever you need cool air and more circulation. The Lasko has three speed settings and is programmable between 30 minutes and 7.5 hours. We also like that the Lasko has a one-year warranty and uses patented Blue Plug safety fuse technology.

Pros: The Lasko provides a soft white noise that is ideal for sleeping. It also comes with a nighttime setting that will gradually reduce the strength of the fan to the lowest setting.

Cons: At 43 inches high with a 13-inch footprint, the Lasko is the largest fan on our list.

Quietly cool any room with the Seville Classics UltraSlimline Oscillating Tower Fan, which features a noise-reducing steel intake grill. The fan has 75 degrees of oscillation and a remote control that includes an easy to read LCD display and a 15-foot range for added usability.

Pros: The Seville comes with four fan speeds and three fan modes, giving users the ability to customize their cooling preferences. It also includes a fused safety plug that will guard against damage caused by over-voltage and power surges.

Cons: The steel intake grill can become clogged with hair in homes with pets. 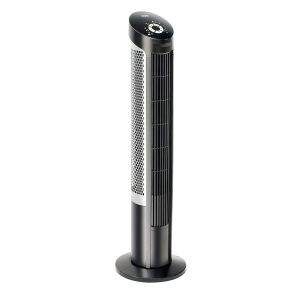 Customize your cooling experience with the 8-speed tower fan from Honeywell, which also includes sound options. Helping with air circulation and cooling, the Honeywell also features shut off timers and dimming features, making it an excellent choice for bedrooms.

Pros: The Honeywell is the slimmest tower fan on our list and measures 10” x 8” x 32”, making it the smallest tower all around.

Cons: The Honeywell is better suited for small rooms and is not as powerful as the first two fans. It’s also not possible to access the dimmer when using the remote.