There are people who like decorating for the holidays, and then there are people who build traffic-stopping, viral Halloween decoration displays that wow kids and adults of all ages. People like Alan Perkins of Olmstead Falls, Ohio, who went viral last year for his gargantuan skeleton display that garnered attention from hundreds of thousands, including The Home Depot, the creator of the 12-foot skeleton. (Which Perkins owns, of course).

Perkins grew up with a zest for spooking his friends and family decorating a large, family-owned barn in the country and assisted in setting up haunted houses for charity in college, where his creative passion for over-the-top, themed decoration scenes really sparked. He’s now known throughout his neighborhood for his impressive decoration setups that are designed to be immersive, larger-than-life and family-friendly as well.

We got a chance to sit down and speak with Perkins about his process for coming up with conceptual themes each year, sourcing materials, building the display itself and advice he has for aspiring large-scale decorators. Or as he calls them, house “haunters.” We also asked him for must-have materials all decorators should have, and have included a list of those below. 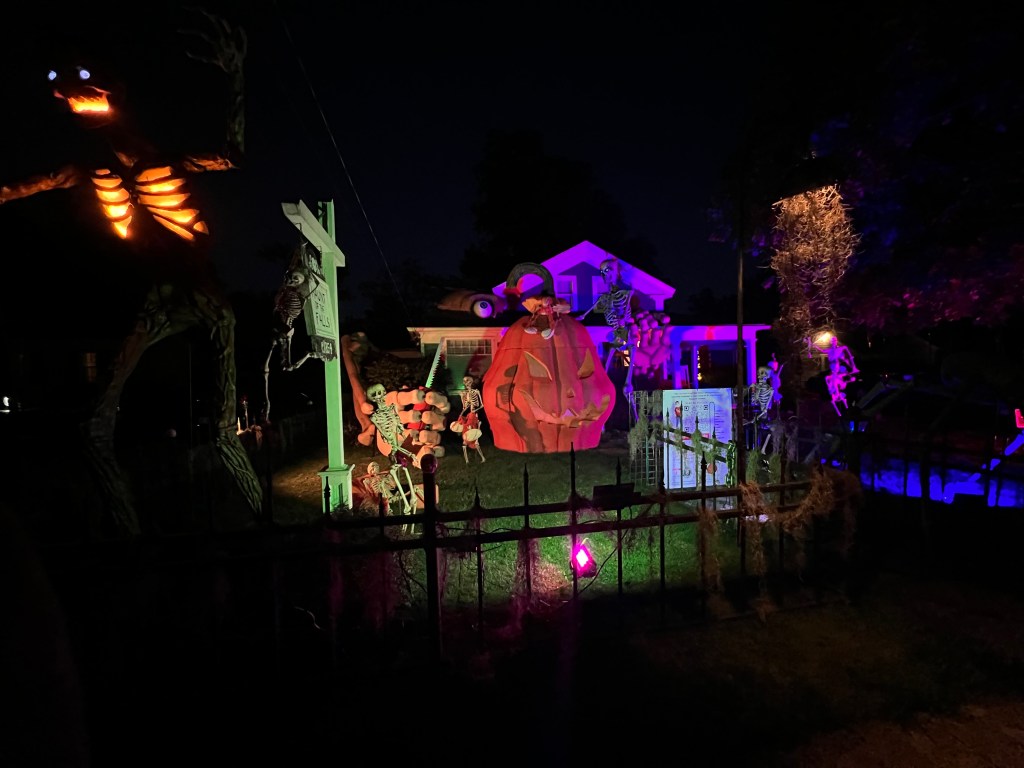 Perkins emphasized numerous times that he tries to make his displays as family-friendly as possible, so innocent passersby aren’t accosted with something they didn’t sign up for, for themselves or their children.

“Coming up with a theme is always a challenge because you have to come up with something that grabs the child’s attention but doesn’t lose the adults’ attention, and there are very few things out there that work like that,” said Perkins.

“The last few years I’ve done skeletons and spiders. And that seems to be creepy enough for Halloween, and Halloween-related, but it’s not overly creepy and gory ’cause I’ve got kids and I try to keep a family-friendly display.”

Last year, Perkins created a viral Halloween decoration display with the 12-foot skeleton from The Home Depot wherein it was dwarfed by a set of gigantic skeleton hands and an eyeball poking through the roof. He explained “it was basically to dwarf Home Depot’s skeleton and kind of pick on them a little bit. It just seemed like something fun to do and it got their attention,” said Perkins, who was tweeted at by the brand last year for his display.

“My concept is usually whimsical and fun, but Halloween-related. So a giant-sized LEGO Batmobile that my kid could sit in is one. I did a haunted house one year that basically looked like it was made of LEGOs. I’ve done a big pirate ship that had minions on it in the past. So, things that draw people’s attention, but are family-friendly, is what I shoot for,” said Perkins. 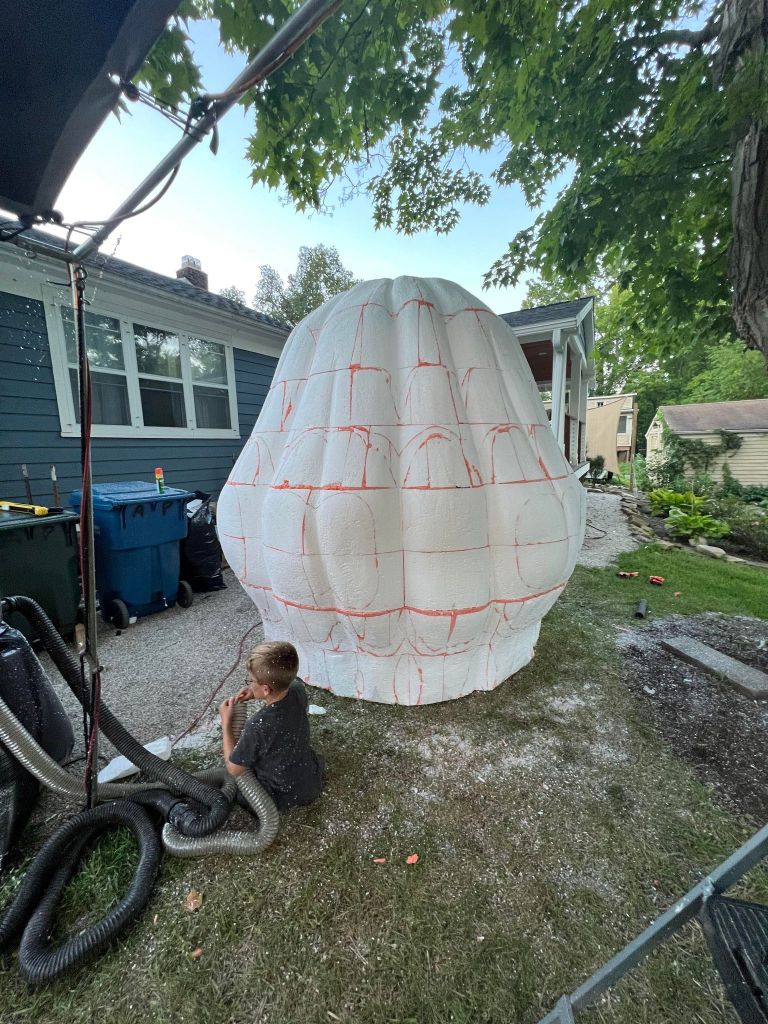 This year, Perkins has created a scene with The Home Depot’s giant skeleton yet again, but this time rather than being gripped by those giant hands they’re carving a 10-foot tall pumpkin, and The Home Depot’s 12-foot skeleton is lifting off the lid of the gourd. Smaller, 5-foot posable skeletons are hauling away pieces of the pumpkin for an in-progress scene.

He has also donned his yard with other accessory decorations like tombstones with his neighbors’ names on them, spiders, LED lights and will use a fog machine as well to add to the ambiance. It’s all on-theme, cohesive and an impressive display of festive passion.

Tips for House Haunters, From an Expert in Viral Decorations

Perkins offered a few tips and hacks for sourcing materials for cheap and building your display in a way that’s impressive, without looking like you threw any spooky decorations you could find on your lawn.

Perkins’ number one piece of advice was to find a theme that works for you. “You don’t want it to look like Home Depot threw up their store display in your yard. Find a theme that works and go with that. I chose spiders and skeletons. They go well together. A creepy clown next to a downed spaceship, with some zombies just doesn’t bode well,” said Perkins.

“If you ever go to a haunted house, they have whole themes for the haunted houses like creepy clowns or even CarnEvil. But they at least divide the haunt into rooms with specific scenes. It really does set your home haunt apart when everything fits together.”

This year, a Chicago home went viral for its Stranger Things-inspired Halloween display, as one example.

Perkins’ next step after finding his theme and mapping out what he wants to do is establishing a budget and outsourcing his materials. Every year, he tries to find raw materials for as cheap as possible, as well as upgrade a few of his foundational gadgets — like his fog machine or light projectors.

He mentioned that The Home Depot, Lowe’s and other home improvement stores often have spare lumber, styrofoam, mistinted paint and other flawed materials you can buy for cheap if they’re unable to sell them for some reason.

“The giant foam pumpkin that I’m doing this year is made out of styrofoam blocks that I got from Tractor Supply, that they get from between their trailers when they get trailers shipped in. It’s a blocking material that keeps the trailers protected when they’re on the road,” said Perkins.

“They give them away for free or at least they have in the past, and then you can make something out of these 12-inch blocks of foam, if you have a creative mindset to do such.”

“The Home Depot has a clearance cart of lumber that they call ‘cul lumber’ C-U-L, and it’s basically lumber that’s slightly warped or it has some cracks in it so it might not be perfect for building a house out of but it might work really well to make a coffin out of, or a tombstone,” said Perkins.

“I do the same thing with mistint paints from Lowe’s or Home Depot, you get a gallon of paint that should be $30 that’s marked down to $7 because it’s not the right color for somebody. But it’s an off-color gray or brown, I could probably paint a tombstone with that.”

Perkins emphasized the importance of lighting for your display, not just so people can see it, but also the type of lighting you choose. “If you can’t see the props or if your yard looks like it is daytime because of the wrong lights, it will ruin the effect. I will be running LED flood lights this year that are controlled by my phone,” said Perkins.

He specifically recommends these landscape LED floodlights for your displays. You can control them from your phone, customize the color and tint and set an on/off schedule, so your display turns on as soon as the sun goes down. 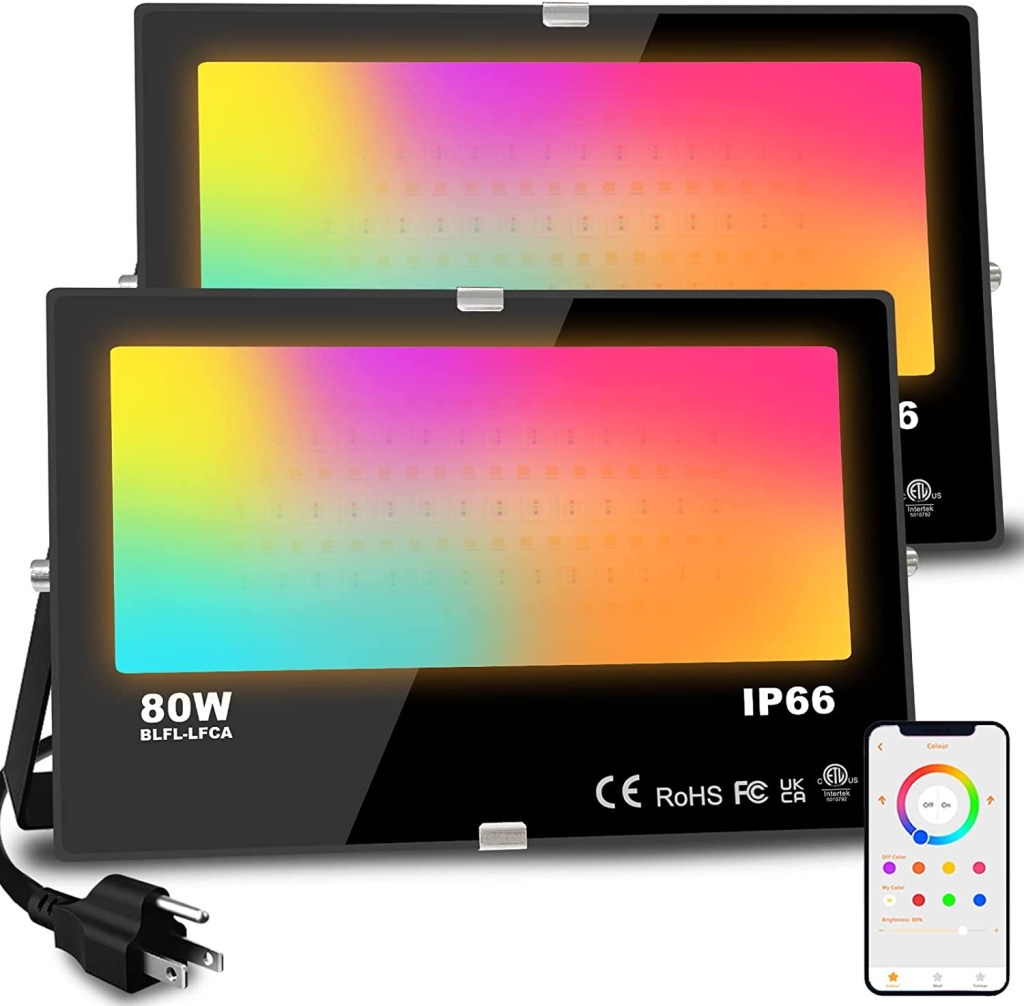 “There are a ton of options from spots to floods to rope lights. Some are Bluetooth controlled and some are RGB remotes. They all let you choose whatever color you like. Just remember, some colors will wash out your props and turn orange pumpkins red so choose the colors and brightness with care.”

Perkins also highlighted the importance of sound as a key background detail that can make a big difference in the effect of your display.

“Sound is also really important. Do you want your haunt to have creepy music? Or do you want chains rattling and ghosts shrieking? I play a mix of a few artists that make music for haunted houses,” said Perkins.

“I use Midnight Syndicate, Nox Arcana, and Verse 13. I pick songs with no chains rattling but just music which I call dark symphonies. Usually, this is played as just low background noise, not overbearing.”

“Every great haunted house needs fog. The only solution I run is Froggy’s Fog as they make professional solutions that are designed not to affect people, even those with asthma. Plus a gallon of their solution is no more expensive than the cheap solutions you find in local stores with their Halloween decor,” said Perkins.

“I also highly recommend their fog machine as it is a workhorse and does exactly what it says it does,” said Perkins. 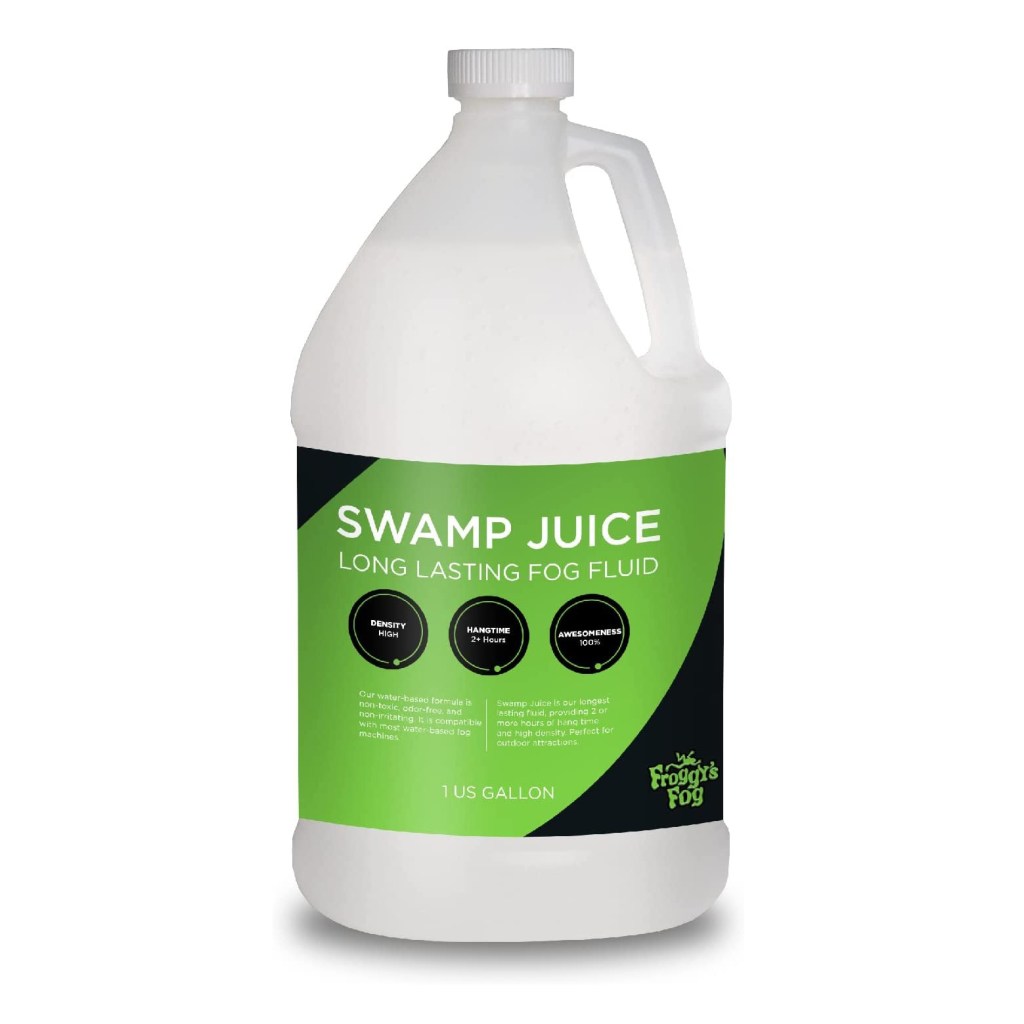 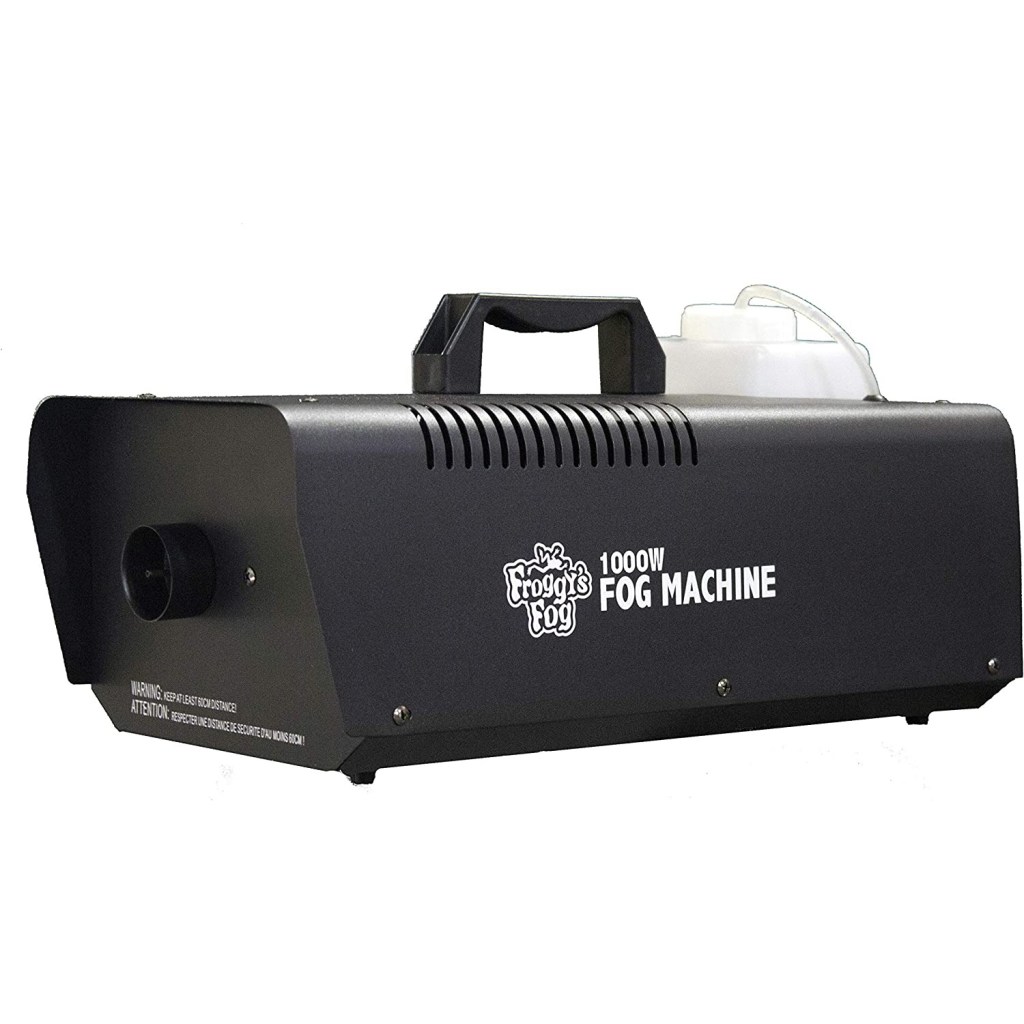 Editor’s Note: Some quotes have been lightly edited for grammar or clarity.