On July 6, Walmart announced that it will offer its direct-to-fridge InHome service as an add-on for Walmart+ members. The option, which allows the company to deliver groceries and place them inside your refrigerator when you’re not home, is being offered to new and existing subscribers of Walmart+’s $12.95 a month service for an extra $7 a month.

Grocery delivery is certainly nothing new. However, giving someone access to your refrigerator while you’re away from home requires a large amount of trust. Even Amazon’s most loyal customers might think twice before handing over their house keys. Even so, Walmart says that its in-house delivery has already proven to be popular among Walmart+ shoppers.

“InHome has one of the highest customer experience ratings in the business, and now we’ve made it even easier to access in even more locations as we grow to reach over 30 million households by the end of the year,” Whitney Pegden, the vice president and general manager of InHome, said in a recent statement.

Initially launched in 2019, Walmart’s InHome delivery service will allow customers to place orders online and have them delivered to their refrigerator by a Walmart associate, who enters by way of a smart lock. Walmart also announced that it is launching InHome in several new markets including Miami, Tampa, Orlando, Dallas, Austin, San Jose and San Francisco. Before this, the service was available in a limited number of locations.

The convenience comes at a price that’s not far from that of Amazon’s popular Prime membership. Walmart+ service will cost you $12.95 a month (or $98 a year), while unlimited, tip-free InHome delivery will run you an extra $7 a month (or $40 per year). Priced at $138 annually for both, it’s exactly $1 less than you’d pay for an annual Prime membership.

For shoppers dealing with stolen packages and porch pirates, it’s easy to see the appeal of store-to-fridge delivery service. For perishable food items, this kind of service is especially attractive.

But, again, we have to ask: do you trust Walmart enough to hand over the keys to your home? 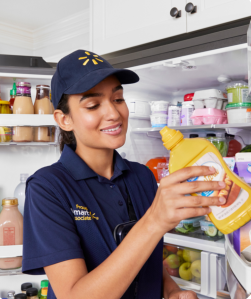