Hey world, we’ve got a question.

Do they still make waterbeds?

What happened to this seemingly ingenious sleep aid, the mattress designed to help sleepers drift away to the rhythmic movements of water every night? Did they just disappear?

Waterbeds have always been fascinating, especially for those of us who came after their prime and have always wondered why their immense popularity didn’t seem to last. Were the potential negative consequences of a leak just too dire to bear anymore? Was the sleep not as restful as advertised? And how exactly are they made?

As you can tell, we have a lot of questions about these plastic mattresses filled with water, so we decided to get some answers. Let’s explore this neglected corner of sleep society.

What Happened to Waterbeds? The History of the Water Mattress

In order to understand the story of waterbeds and their history, we decided to consult a true expert. Bill Fish is the CEO of the Sleep Foundation, an organization dedicated to all things sleep and helping people find more of it. He’s also a certified sleep coach and helps nearly two million people per month to improve their sleep routines through his website.

Those are impressive credentials, but he also graduated from high school whilst sleeping on a queen-sized waterbed and was eager to discuss this sleep phenomenon with us.

According to Bill, waterbeds were “all the rage in the late 1970s, peaking in the mid-1980s, where at one point 22% of all bedding purchases were waterbeds.”

The waterbed was invented in the late 1960s as a master’s thesis project at San Francisco State University. The creator, Charles Hall, still sleeps on one every night despite his creation’s decline in popularity, and he believes they’re still the most comfortable bed.

Here’s a look at a vintage waterbed commercial in all its 1970s glory:

Water mattresses rose to immense popularity, becoming a $2-billion-a-year industry in 1989, but demand declined throughout the 1990s. By 2013, waterbeds laid claim to less than 5 percent of the mattress industry. Oh, how the mighty have fallen.

And they are mighty alright — a full-size waterbed at full liquid capacity weighs 1,600 pounds. This makes them very difficult to move, a major factor in their ultimate decline in popularity.

Now, waterbeds are rare, and most young people don’t know anyone who’s purchased one. According to Bill, the reasons behind waterbeds’ withdrawal from popular society is a bit more complicated than you would think.

“In the 1990s, the technology in mattresses began to improve. With companies such as Tempurpedic changing the game a bit utilizing memory foam, as well as other components to get away from the firm innerspring beds of the prior 40 years.”

“At the same time, people were finally coming to the realization that waterbeds were quite a bit of work. A waterbed is extremely heavy, and moving it even a bit would require the entire bed to be drained. The bed frames are also extremely heavy due to the support needed for the actual bed.” 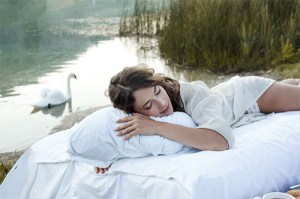 “Draining the bed would require a hose, as well as a pump, one misstep and you are looking at a mini flood. Waterbeds also had a tendency to leak all too frequently. It got to the point where many landlords wouldn’t even allow a waterbed inside of their buildings.”

All of this became too difficult to deal with for consumers, and the allure of drifting off to the soothing ripples of aquatic bliss was outweighed by the hassle of moving them, filling them, draining them and praying for no leaks. In fact, your own apartment lease might forbid waterbeds. My own lease agreement stipulates that no “water-filled furniture” is allowed on the premises.

Do They Still Make Waterbeds?

Yes, it turns out there are still some sleep manufacturers producing and selling waterbeds. They’re not nearly as popular or common as they were in their hay day, but they’ve still got a presence. The best waterbeds will cost you about $1,500, which is one more reason they struggle to survive in the era of cheap Casper mattresses.

Keep reading to find out where you can still buy waterbeds in 2021.

This waterbed mattress comes with a soft outer frame that makes it easy to get into and out of bed. The frame is soy-based foam with a Polymer Band that gives when you sit on it from above but resists lateral stretching or warping. The body of this mattress is over 90% water and has a “Feathertop” pressure reduction surface that relieves tension in your body and creates the relaxing sensation of floatation, exactly what you want out of your new waterbed. It’s also got reinforced corners and a 4-way waveless system to prevent shifting during the night. 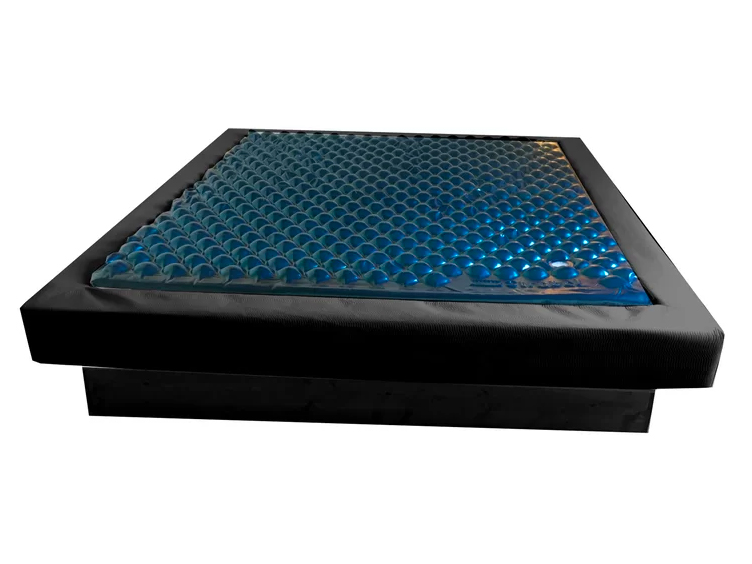 This waterbed mattress includes a hard wood frame for support and comes with a flexible headboard you can change out if you already have one you prefer. The whole mattress comes with a heat controller so you can regulate your temperature while you sleep and make it warmer in the winter and cooler in the summer. It’s got a Feathertop with no pressure points to maximize your comfort, and the stretched-tight surface combined with the soft sides creates a hammock-like effect. Like the best waterbeds available today, the design looks like it’s straight out of the 1980s, which is either good or bad depending on your tastes. 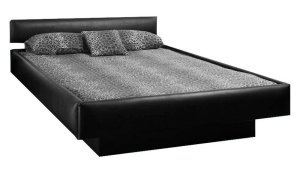 This waterbed from INNOMAX has Sanctuary Free Flow technology as well as No Wave reduction for that weightless feeling you’re looking for in your waterbed mattress. It’s designed to give you that gravity neutral, fluid suspension mid-body support you want with a low tension mattress design and premium vinyl surface. The corners are double reinforced to prevent leaks and it’s got a T-corner lap seam for extra protection. It supports Full Motion easily and has a secure fill valve for the easiest setup possible. 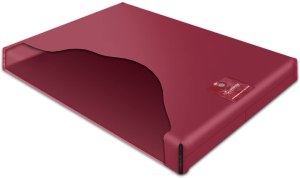 This waterbed mattress is designed with firm sides to make it easier to get in and out of. It’s designed for a weightless feel via a waveless performance and gravity-neutral fluid suspension. The mattress itself is puncture resistant and has enhanced mid-body support. It also has a 4-way tethered support system for internal stabilization and a multi-layer system for eliminating waves. 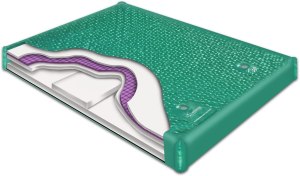 This waterbed mattress comes with a soft pillow top that’s very comfortable and makes the unconventional choice of a waterbed look and feel more conventional. The pillow top cover is bamboo so it’s naturally cooling, and you have a choice between 90%, 95% or 100% waveless based on your preference. Free Flow is also an option, if you’d rather feel the waves. This mattress also has an adjustable digital heating system, and an electric pump with hose adapters comes with your purchase. 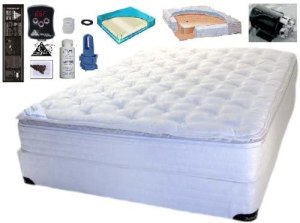 This waterbed mattress from Boyd’s is made with a 5-layer wave reduction system and a 3-layer lumbar support system to keep your back happy. The Regalfoam waveless top keeps you stable and steady throughout your slumber, and the air cushion layer up top has reinforced corners. The mattress also has a 4-point memory stretch tether system that conforms to the shape of your body and keeps you comfortable night after night.

So, What Does the Future Look Like for Waterbeds?

According to Bill, it’s “doubtful that waterbeds will ever return to the mainstream like they were in the 1970s & 1980s, but there are still plenty of people who swear by them and still sleep on them today.”

Waterbeds will likely remain a niche product for the foreseeable future. Turns out, the best waterbeds actually had a huge impact on sleep technology and led to numerous innovations in the mattress world.

Bill explains, “What has been interesting is that with the rise of companies such as Sleep Number, Solaire, or ReST Performance, you are seeing something similar to water, but actually with air. Whereas water displaces itself naturally thus contouring to your body and providing the necessary support, you can now create your own feel by increasing and decreasing air pressure in the technologically advanced beds with air chambers.”

“In essence, that style is almost the waterbed of the 21st century, they just needed someone to pave the way.”

We think Bill sums it up perfectly with “In the sea of memory foam, latex, fabric encased coils, etc, it is fun to look back at how something as simple as a waterbed helped the mattress industry evolve to what it is today.”

Cozy Up and Calm Down With a Brooklinen Weighted Comforter
Some of the quotes in this article have been lightly edited for clarity and grammar.