If you’ve ever seen a professional chef at work, you no doubt have noticed part of their meal preparation often includes whipping a pan from the stove and placing straight in the oven, or visa versa. But, if you’ve ever tried doing that with a standard frying pan (and consequently melted it), you’ve probably realized those professional chefs aren’t using standard kitchen gear.

What makes this stove-to-oven switch possible is a cast iron skillet. These entirely metal pans are made for cooking of the highest order. Not only do they allow you to switch from stove to oven without worry, thereby opening up a whole new range of delicious meals to try, cast iron can actually flavor your food. Plus, another one of the many benefits of a cast iron skillet is that by preparing your meals in a single pan, post-meal cleaning up is easier and significantly reduced.

We’ve put together a list of the best cast iron skillets available on Amazon. Choices include skillets for newbies and pros as well as options for families who love to eat. Check these skillets out and find the new kitchen tool to transform your cooking style into that of the stove-to-oven chef you’ve seen on TV.

With over 11,000 5-star reviews on Amazon, there’s plenty of evidence to suggest you’re going to enjoy cooking with a Lodge Cast Iron Skillet . This pan is available in a range of sizes from three to 15 inches in diameter and even comes with optional iron covers, which may be necessary depending on the meals you choose to cook. Each piece is made in the USA and has been seasoned using only 100% vegetable oil. 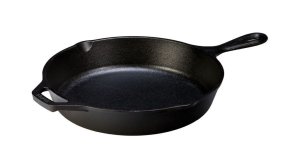 At under $15, you just can’t go wrong with the Home-Complete Pre-Seasoned Cast Iron Skillet . It’s available in a range of sizes and comes with a pre-seasoned coating. It also offers an impressive amount of heat retention to deliver delicious food from day one. Furthermore, you can use the skillet in high heat conditions. You’ll also find a hole in the handle to make storing your skillet simple as well as an additional hole in the pan’s side for a secondary hanging option. To clean the pan, simply add water and wipe clean. 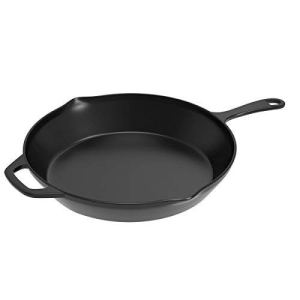 If you’re new to the world of cast iron, the Utopia Kitchen Pre-Seasoned Cast Iron Skillet is a great choice for you. At 12.5 inches in diameter, there’s plenty of room for cooking all your favorites. You’ll also find the hanging hook and pan head handle make storing and maneuvering this skillet especially easy. The impressive heat retention ensures your food cooks quickly and remains warm right to the moment of serving. 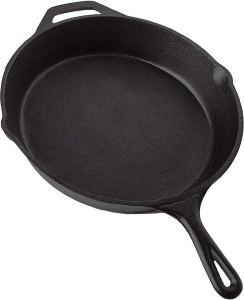 For anyone who thinks bigger is better, the AmazonBasics Pre-Seasoned Cast Iron Skillet offers an impressive 15-inch diameter. With more than enough space to sear, pan-fry, bake, broil, roast and craft food for you and plenty of your friends, this beautifully crafted skillet will deliver delicious food for years to come. In addition to being safe to 500 degrees, the skillet comes with Amazon’s AmazonBasics limited one-year warranty and includes a handy hanging hole for easy storage.

With over 90% of users awarding the Legend Cast Iron Multi-Cooker Skillet Set a 5-star review, it’s easy to why this set makes a great starter kit for people who want to beef up their cast iron collection.

Inside this kit, you get two nine-and-a-half-inch diameter skillets, both of which have large handles for easy maneuvering in the kitchen. The one difference between the two is their depth. One is deep and is known as a Dutch oven. The other is shallow, which makes it better for frying food or making eggs. The shallow depth also allows it to work as a lid for the Dutch oven. In short, this set provides an impressive amount of versatility when it comes to cooking with cast iron. 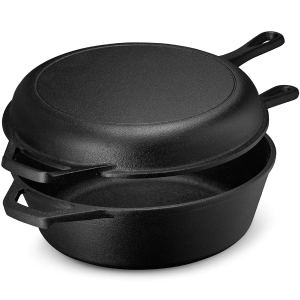 If you have already earned your cast iron skillet stripes and are searching for a way to express yourself in the kitchen, this Simple Chef Cast Iron Skillet 3-Piece Set has everything you’ll need. With ten, eight and six-inch diameter pans, there’s no dish that’ll be beyond your capabilities. Each pan includes a handy hole in the handle for easy hanging, and the tough design makes them virtually indestructible. In addition, each pan comes factory pre-seasoned and is ready to enriched your food on arrival. Whether you’re looking to create pizza, saute onions or perfectly cook your fillet, this comprehensive set has you covered. 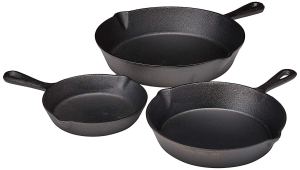