Ever since man first harnessed fire, advancements in cooking came few and far between for a couple thousand years. But these days, it seems like a whole new way to make food is introduced every other year. From sous-vide to induction cooktops to internet-connected everything, technology continues to make cooking safer and more convenient. That’s ultimately a good thing; it means that we can spend less time laboring in the kitchen and more time sharing food with friends and family. But it can be hard to separate the hype from the appliances that will actually make your life easier. One innovation that’s actually worth considering is the pressure cooker.

While multi-cookers are a relatively new innovation, pressure cooking is anything but. Its history dates back to the “Digester,” a somewhat ominously named cookpot invented by Frenchman Denis Papin in the 1600s. But today’s pressure cookers are a far cry from those old school devices. For one thing, modern pressure cookers are electric appliances, not stovetop pots. Also, they’re designed to consolidate the jobs of a whole bunch of kitchen tools into one compact and easy-to-use appliance.

Pressure cookers can be used as a slow cooker, a pressure cooker, a rice cooker or a steamer, and some models can even be used as a cake maker. With built-in presets and intuitive buttons, these appliances allow you to have a delicious meal in minimal time with minimal work. That means that if you’re not much of a cook, you won’t have to settle for microwave meals and packaged ramen.

There are other players in the game besides the Instant Pot brand, although Instant Pot still remains one of the best choices. Instant Pot also offers a variety of different models with different capabilities, so you don’t have to overpay for features you don’t need. We’ve rounded up some of the best pressure cookers on the market, including options from Instant Pot Ninja, and Mueller. Plus, if you’d rather buy a classic pressure cooker that you can use on your stovetop range, we’ve included good options in that category as well.

There’s a good deal of variation in the cost of Instant Pot’s products, and this option from the brand is one of the most advanced (and expensive). But with 10-in-1 functionality, the modest price is more than justified. Included features are a pressure cooker, slow cooker, rice/porridge cooker, yogurt maker, cake maker, egg cooker, saute/searing, steamer, warmer and sterilizer. Where it goes above other models is the highly detailed customization. You can adjust the altitude settings, for example, which can make a big difference for those living at high elevations. The detailed display shows a wide array of metrics, which allows for more precise control. 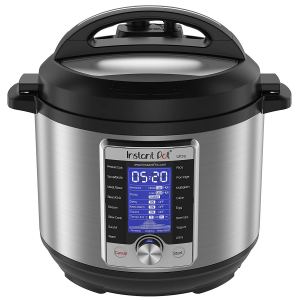 Just because Instant Pot dominates the market on pressure cookers, doesn’t mean there aren’t other great brands that offer unique and powerful features. Mueller is a German/Austrian brand that makes a 10-in-1 pressure cooker. Featured settings include yogurt, steamer, sterilizer, and saute. While the presets are very handy, you can also set a custom cooking time for a more personalized experience. It also has a detailed display, and you can change the pressure from high to low and set different modes.

Pros: This pot from Mueller is more affordable than the Ultra from Instant Pot, but it still offers 10-in-1 functionality. In addition, you can also set custom cooking times, adjust the pressure from high to low, and change modes from “less,” “normal,” and “more.”

Cons: There can be somewhat of a learning curve to familiarizing yourself with the settings. The instructions are somewhat vague, as well. 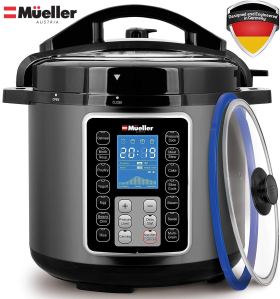 A more affordable model from the Instant Pot brand is this V3. It has fewer advanced settings than the Ultra, but there’s still a whole lot that it can do. The basic presets include pressure cooker, slow cooker, rice cooker, saute, steamer and warmer. It also has cake and egg settings. The display is less advanced; it has a simple time display, rather than the complex display on the Ultra. But for those looking for an advanced but intuitive model, this is a great bet.

Pros: More affordable than the Ultra model, while still maintaining some of the smart features like a built-in microprocessor that monitors time, pressure and temperature.

Cons: Does not have a yogurt-making feature, doesn’t have high and low-pressure settings. 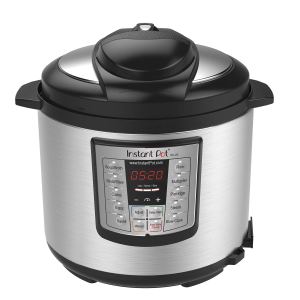 Ninja is perhaps best known for making great blenders, but they offer a wide array of advanced kitchen appliances. This particular model is reasonably priced, although it doesn’t offer as many features as some of the options from Instant Pot. The settings included here are pressure cook, slow cook, steam, sear/sauté, and keep warm. That’s half of the features of the Instant Pot Ultra. However, it’s still plenty, especially if you don’t plan on using your cooker to make cakes or yogurt. The pressure cooker feature allows you to choose between high or low pressure for more precise results. There’s also an included steamer rack.

Pros: Precise pressure cooking setting allows you to choose between high and low settings. Saute and sear functions also have 5 settings ranging from low to high. 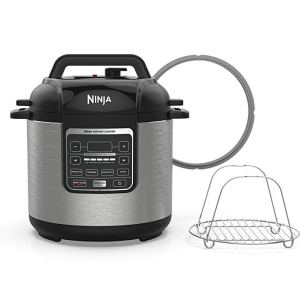 If you want to go all-in on the smart home revolution, then the Chef IQ pressure cooker is the way to go. The pressure cooker can connect with an app, giving you easy control over the pressure cooker without even having to get off the couch. The cooker also has a built-in scale, making it easier to quickly prepare your meal. A steam rack and basket are included with the cooker. With 300 cooking presets built-in, it’s easy to get cooking.

Pros: Pairs with an app for easy control. Includes a built-in scale for quick measurements.

Cons: Some may prefer a more low-tech approach. 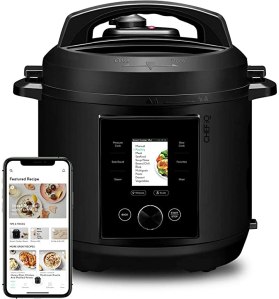 If you’d rather keep it old school, this pressure cooker comes from T-Fal, one of the most trusted brands for professional-grade cookware. It’s a traditional stovetop pressure cooker, and it uses pressure to cook foods faster than other methods. A quick-release button on top of the cooker makes it easy to remove the lid, while an adjustable steam release makes it easier to control pressure. The valves and handles are made from plastic, so they’ll be cool to the touch, while the pot and lid are stainless steel, ensuring longevity. 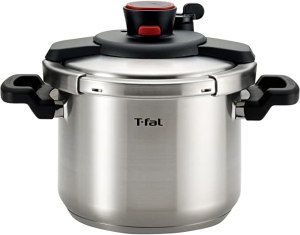 For a simple and reliable electric pressure cooker, this option from Power Pressure Cooker XL has intuitive buttons around the front that make it easy to pick the setting you want. The inner pot can be removed for easy handwashing, or you can put it in the dishwasher. Plus, a cooker rack and steamer basket are included with the cooker. It’s available in 6, 8 and 10-quart sizes.

Cons: Some options may have more features. 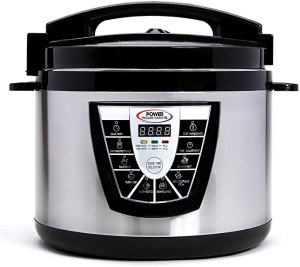 This pressure cooker from Presto features a traditional design, so it’s a good option if you want a classic, no-frills cooker that you can use on your stove. It has a 6-quart capacity, and there’s also a 4-quart size. It’s made from stainless steel and can be put in a dishwasher. The lid has a pressure gauge that prevents opening the cooker too early. The plastic handle makes it easier to handle without an oven mitt.

Pros: Cover indicator shows that there’s pressure inside the cooker and prevents opening too soon.

Cons: Some parts have to be removed before putting in the dishwasher. 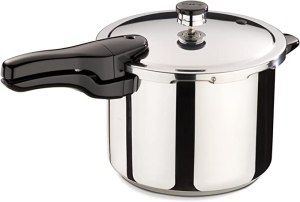