What Are the Best Butcher’s Knives?

The best butcher’s knife acts a lot differently than meat cleavers. Instead of having a big, bulky blade, the best butcher’s knives are larger, longer blades with a curved design at the tip. They’re used by anybody who handles meat on the reg, like butchers, chefs, hunters and potentially even Dahmer himself during his reign. Because of the curved, elongated design, it’s a hell of a lot easier to slice meat and break portions away from the bone.

Why Should You Own the Best Butcher’s Knives?

Whether you’re an actual butcher, a full-time chef or simply someone who cooks a lot of meat at home, the best butcher’s knives will save you a tremendous amount of time in the kitchen or at your workstation. No other knife is able to slice meat as pristinely and easily as a butcher’s knife.

Don’t believe us? Put it to the test.

We’ve got a dare for you. Read along and check out the best butcher’s knives we were able to find online below and compare your cutting experience with every other knife you have in your home. Take every knife from your knife set and go to town on a piece of meat of your choice. In the end, finish it off with a butcher’s knife and you’ll understand what we’re talking about.

Ready to cut meat like a pro? Check out the best butcher’s knives you need to consider below.

This powerhouse will change the way you cook forever. Dalstrong is a force to be reckoned with when it comes to stellar butcher’s knives because of its incomparable design and structure. This knife slices through steak like butter, so much so that cutting meat won’t ever cause you to break a sweat. It has a serious curve to cut without feeling like you’re sawing through a tree. It can cut through cartilage and easily trim fat from any meat you’re working with to save you time and energy in the kitchen. Trust us, you’ll throw your cleaver in the garbage. 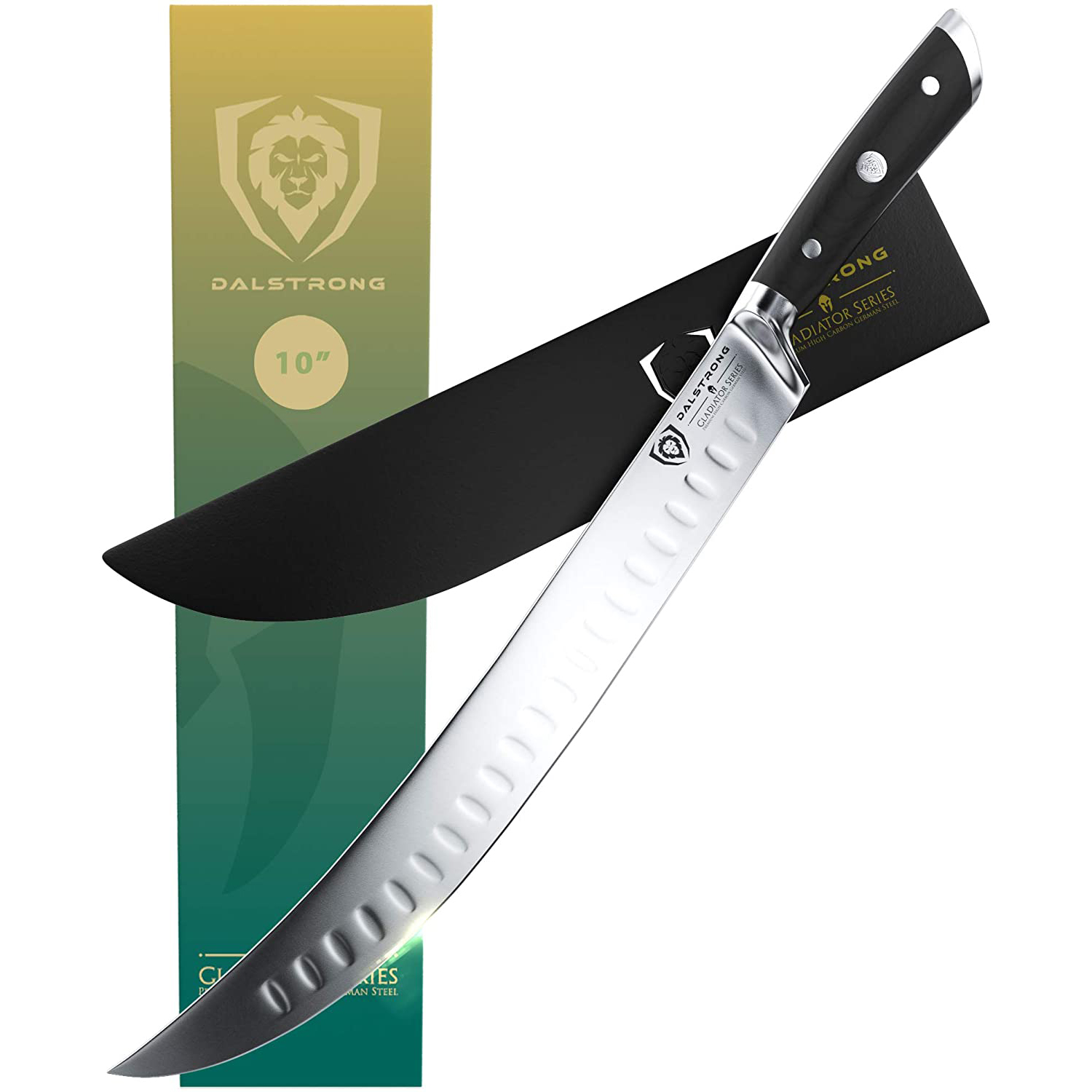 This butcher’s knife is so hardcore that it resembles a machete you’d be using to slash through the brush of the Amazon Jungle. This kitchen necessity is perfect for slicing through tough meat that would otherwise give you a hard time with whatever you’re trying to cut with currently. It has a stainless steel blade with an ergonomic handle ready for gripping. These knives are typically used by pro butchers, but if you are the kind of person that finds yourself cutting a ton of meat at home, this is a must-buy. It’s rather large so it won’t fit in your knife block, so make sure you find it a safe space. Additionally, it’s totally dishwasher safe for easy cleaning. 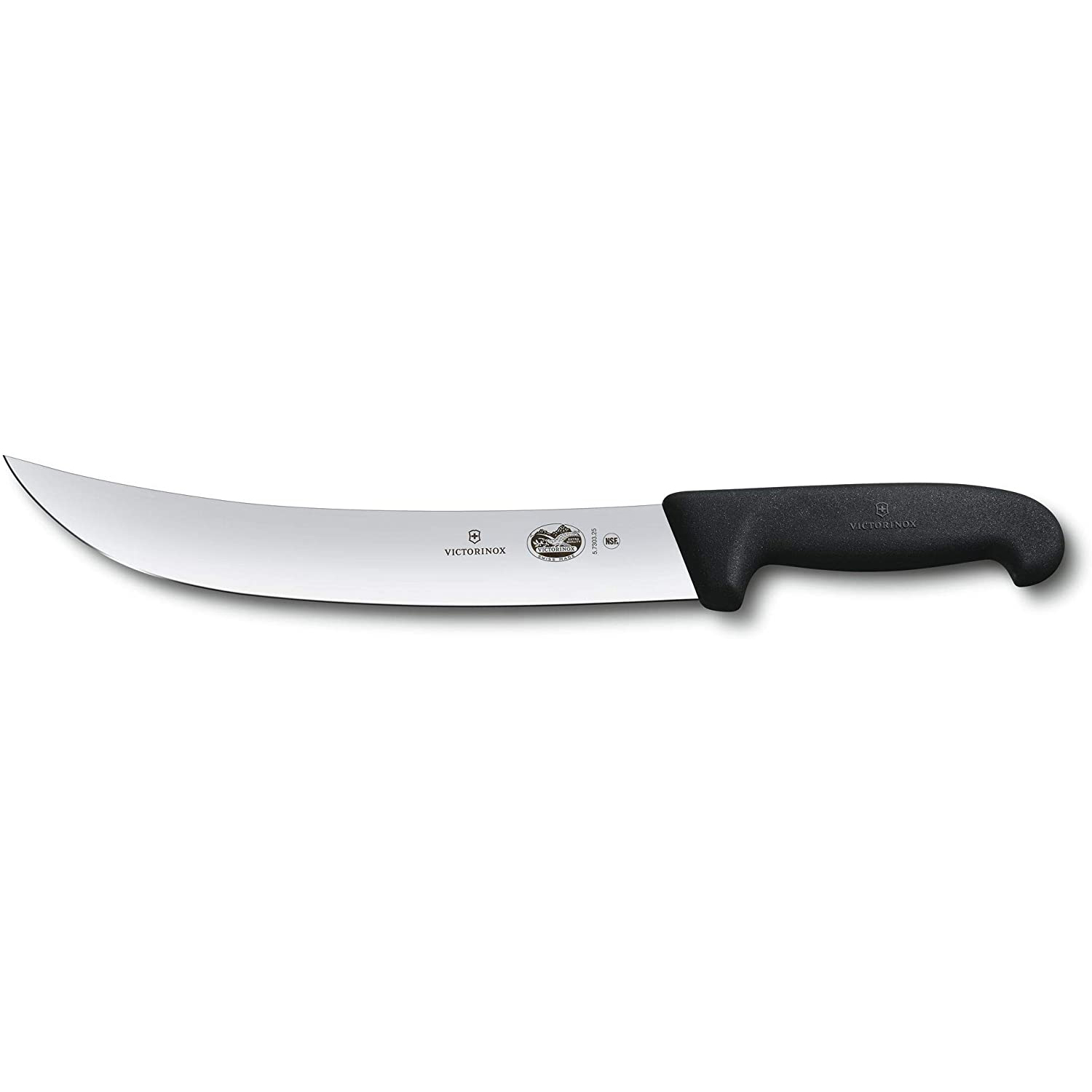 This is the best butcher’s knife for carving the hell out of tough meats. It is so sharp you’ll be extra happy that it comes built with an ergonomic non-slip handle. Trust us, one slip and your hand would never be the same. This butcher’s knife effortlessly carves and lives meat for perfect cuts that’ll give the local butcher a run for their money. It’s made with Japanese steel which means its able to resharpen quickly and is resistant to stains. It’s complete with a finger guard for easier gripping and comes in a number of colors depending on your preference. 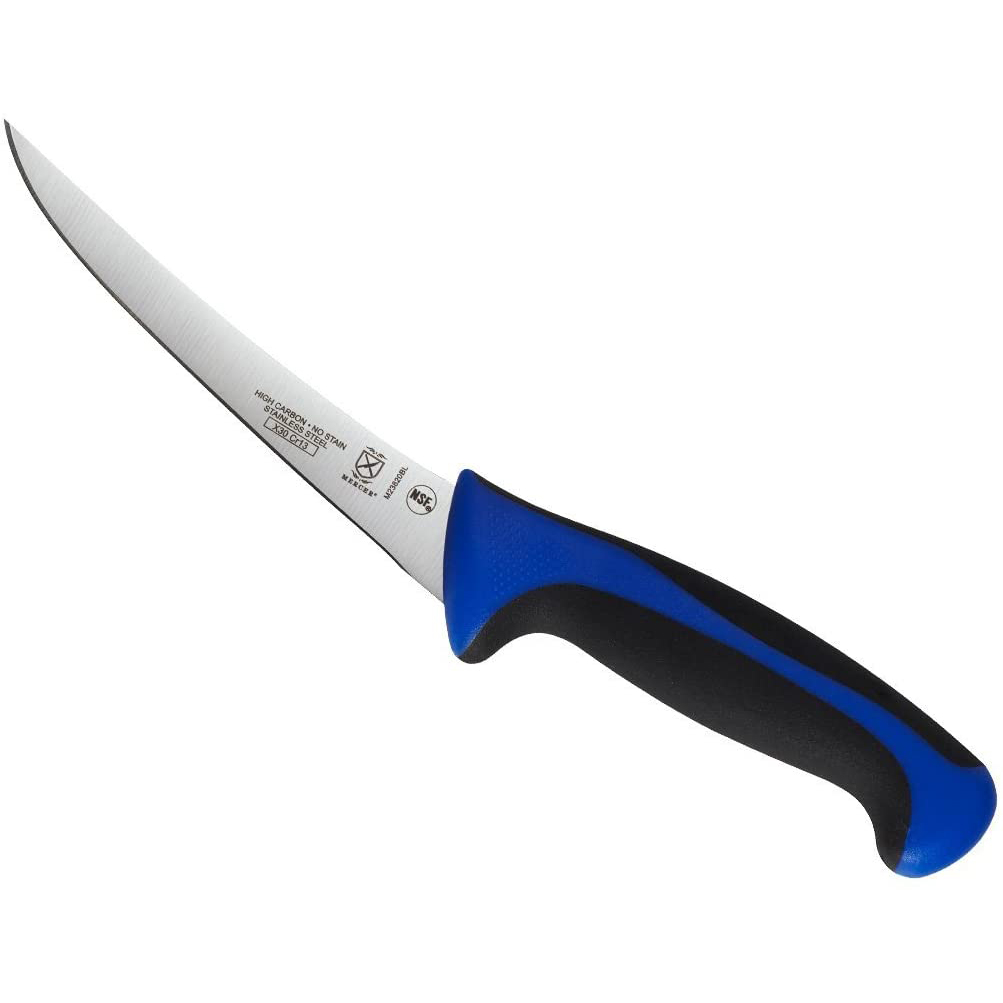 Ready for a butcher’s knife that will have you feeling like you’re the hunter gatherer type? This viking knife makes the best butcher’s knife with a badass look to it. This isn’t your average at-home butcher’s knife, this is one that feels just as great as it does in the kitchen that it does when camping and hunting. It has a leather sheeth for safe-keeping and a hole in the blade for extra support when holding. This knife makes slicing effortless wherever you are and has a super sharp blade. One thing to note: unlike the majority of the best butcher’s knives, this knife isn’t made of stainless steel so you will have to clean it after use each time to prevent rusting. 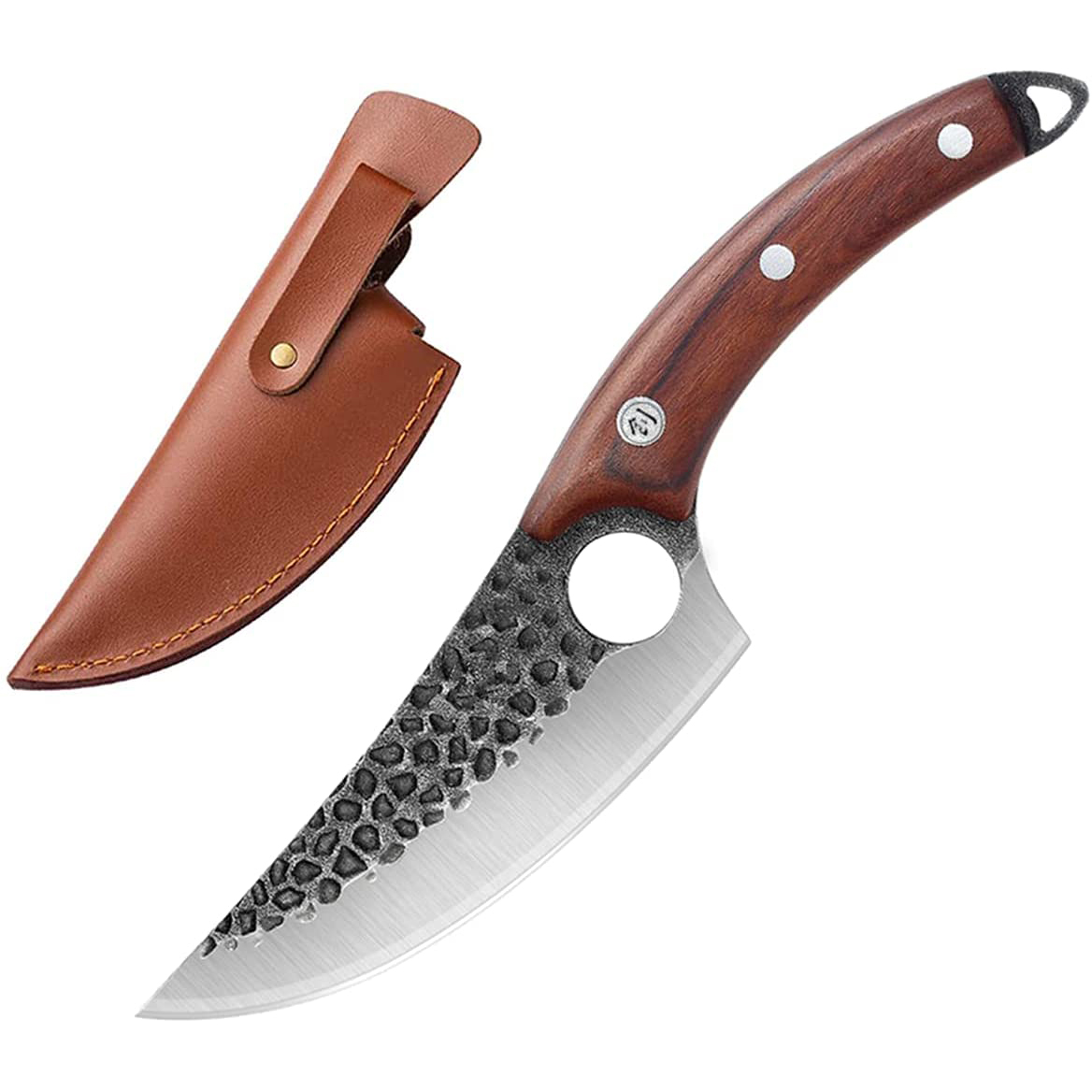 A knife this large will have you cutting and slicing like it’s your job. And, hey, maybe it is. This 10-inch knife is masterfully designed to cut through skin, break through cartilage and trim fat from any meat you’re working with. It has that classic curved design that all butcher’s knives should have to get work done. It’s made from German stainless steel that stays polished and durable no matter how frequently you use it. 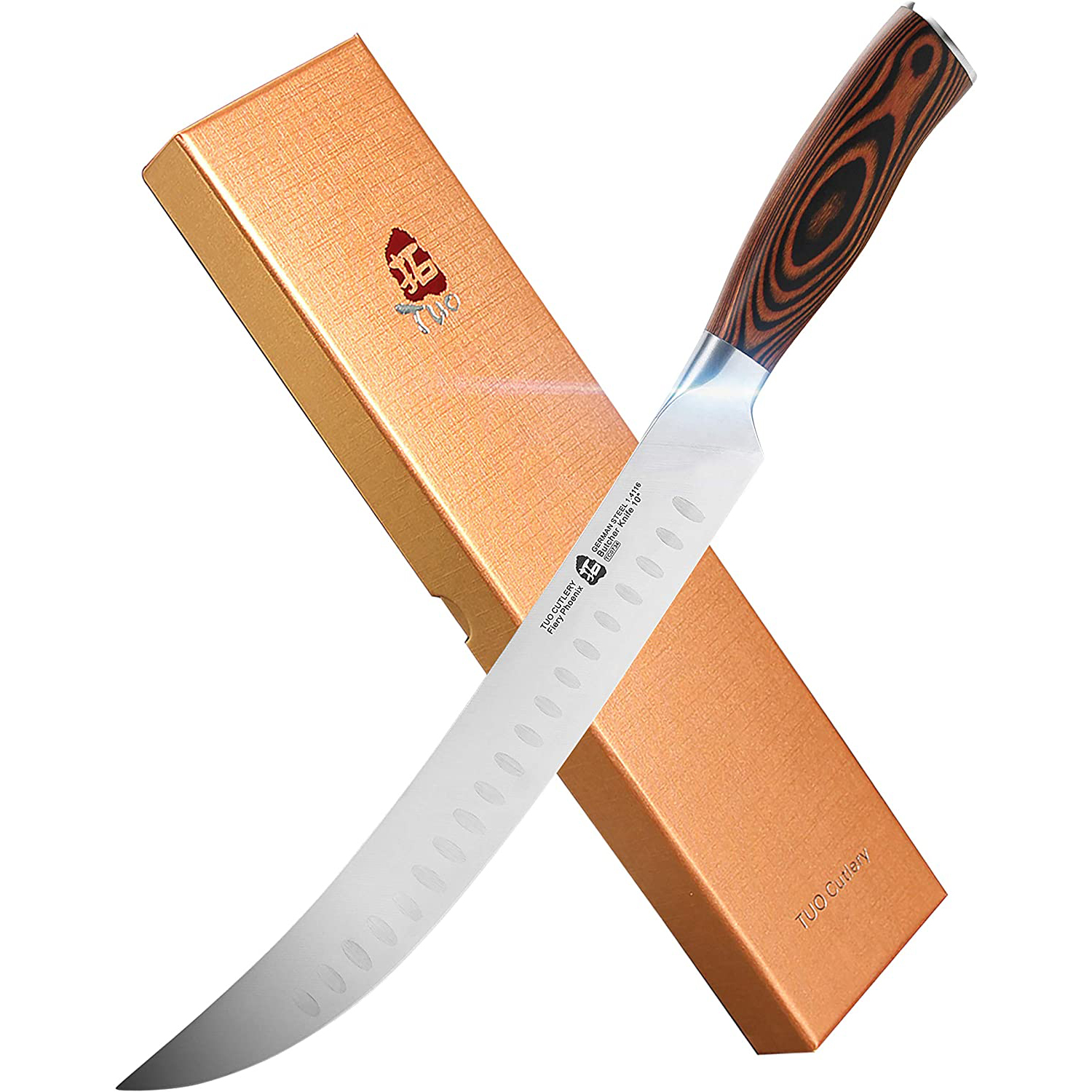 It doesn’t get any more good-looking than a butcher’s knife in all black, that’s why it was impossible for us to leave out this Bull Nose butcher knife from Dalstrong. It’s got a menacing design that will have all already-dead animals screaming in fear. It cuts like butter the same way all Dalstrong knives do and has a military grade handle to fit comfortably in your hand, so you should never be afraid it’s going to slip out mid cut. The blade is rock solid and simply will never break or your money back. 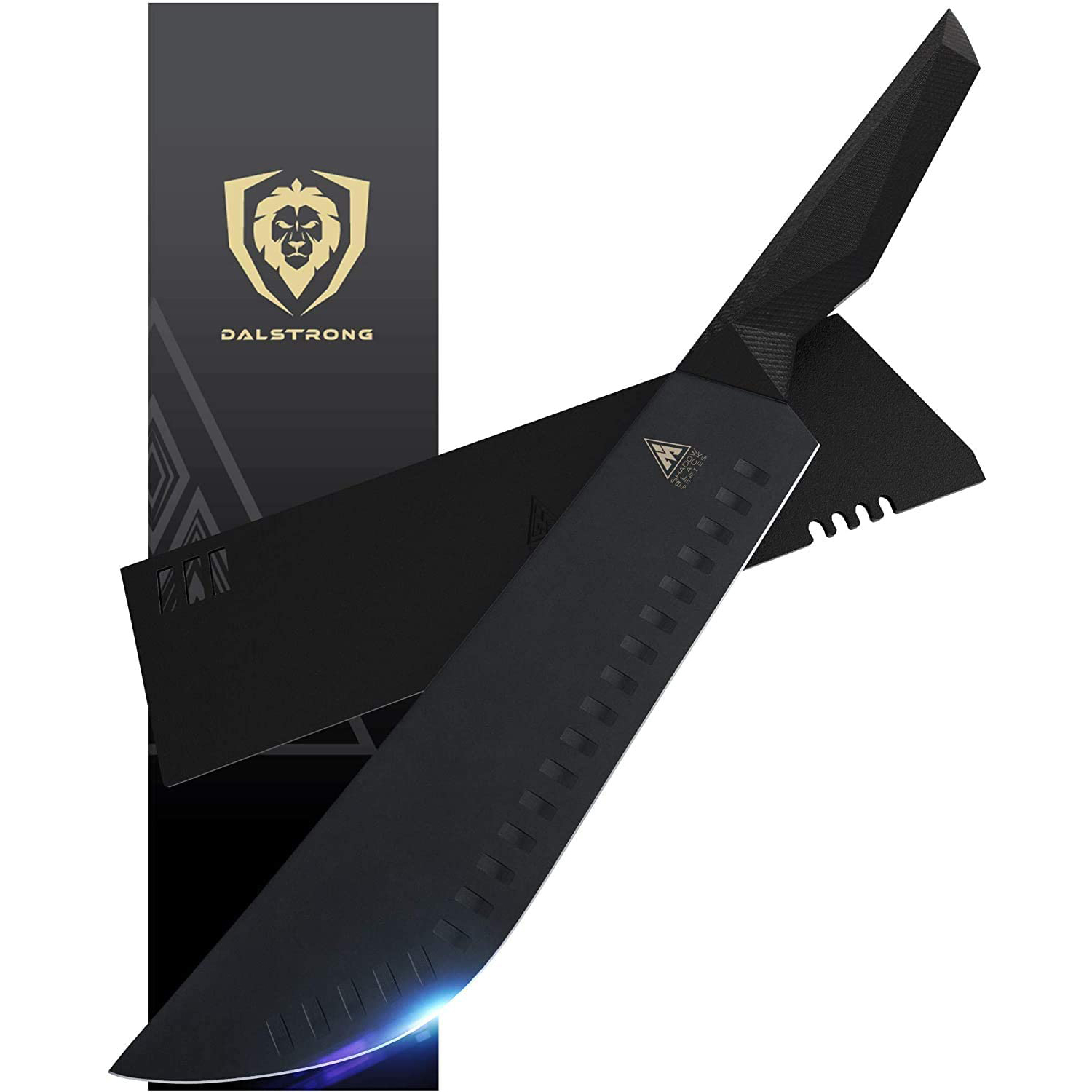