On March 31, 2021, New York became the latest state to legalize the use of recreational marijuana, and public opinion has rapidly shifted in favor of full-blown legalization. Like gay marriage before it, the tides have turned in dramatic fashion, and the federal legalization of weed now seems inevitable. (The popular news site Vox recently declared that “Marijuana legalization has won”.) So it’s no surprise that Americans are getting more creative with their cannabis. Cannabis has finally been accepted in the mainstream, so why not celebrate with some brownies?

Lots of people prefer to smoke cannabis the old-fashioned way, and it’s true that cooking with cannabis can be challenging. But when you experiment with this plant through the culinary world you can explore a whole new side of it, as well as pinpointing dosage more accurately and consuming more discreetly. By following the instructions in marijuana cookbooks, you can learn how to bake much more than pot brownies.

The best cannabis cookbooks explore the gourmet side of weed, teaching you how to infuse it into ingredients like butter, oils, milk, and sugar. In 2021, we’re well beyond the basic standard of the pot brownie — these sweet and savory appetizers, entrees and desserts offer something for bakers and cooks, whether you’re an amateur or a pro.

Although many of these cookbooks contain informative primers so you can get educated before you get baked, there are a few common cooking tools popular among marijuana foodies who like to whip up edibles at home. One is a cheesecloth or mesh strainer, which is necessary for plant material out of infusions. Another is an instant-read thermometer since many recipes rely on paying extra attention to temperature. Finally, many bakers and home chefs use a digital kitchen scale, which can be used to ensure the proper dosage of, let’s say, sugar.

Are you a newbie to cooking? Cooking with cannabis is like any hobby — it gets easier with practice. From weed-infused chicken and waffles to cannabis cocktails, the best marijuana cookbooks have it all. This 4/20, light up your taste buds with these top-rated cannabis cookbooks.

1. Bong Appétit: Mastering the Art of Cooking with Weed by MUNCHIES

Inspired by the MUNCHIES + Viceland TV series, Bong Appétit is the crème de la crème among gourmet cannabis cookbooks. This beginner-friendly book breaks down the science of infusing oils, milk, butter, alcohol and more with cannabis. Boasting mouth-watering recipes like weed butter-basted chicken to weed brownie sundaes, you’ll delight your taste buds and create elevated good times for you and your friends. Outside of recipes, the book also covers marijuana politics and tips from the MUNCHIES network of stoners, experts and expert stoners. 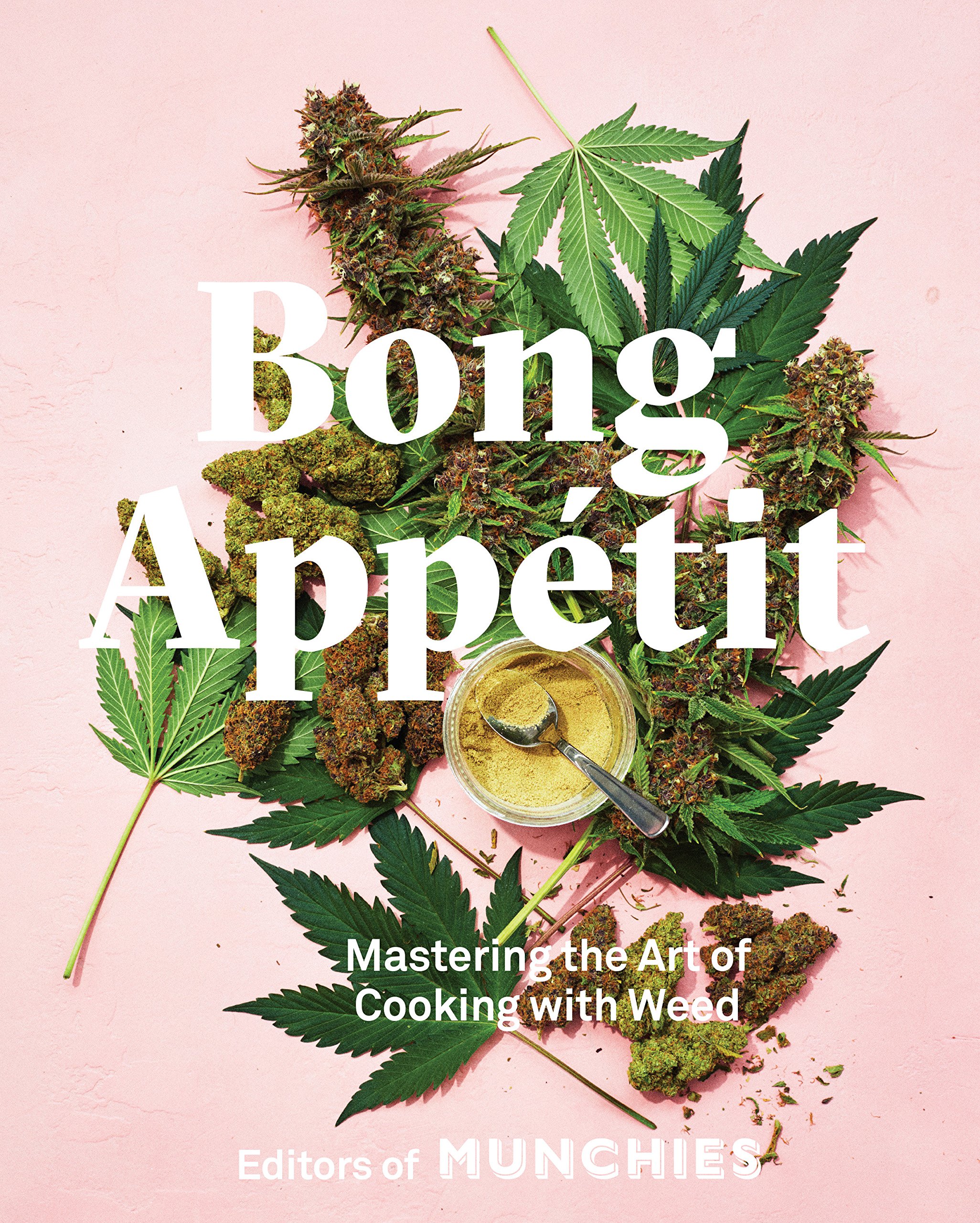 As the world’s most trusted name in all things marijuana, High Times Magazine’s first-ever cookbook features a delicious and intimidation-free guide to cannabis-infused cooking. If you’ve been curious about cooking with cannabis, their easy and accessible recipes offer a tasty range of stoner sweets, appetizers, entrees and cannabis cocktails. It comes packed with mouth-watering color photos and recipes inspired by stoner celebrities like Snoop Dogg, Cheech and Chong, and Willie Nelson. This cookbook was first published in 2012, and it’s amazing to see how much the social stigma surrounding marijuana has diminished in that time. 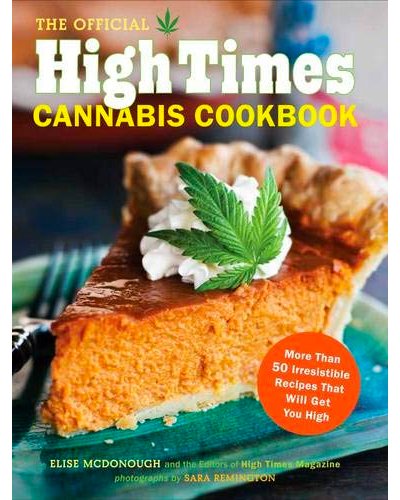 Looking to take your meal to a higher level? From brunch, snacks and late-night cocktails, The Cannabis Kitchen Cookbook offers an educational approach to using cannabis as a prime ingredient for your favorite food and drinks. It provides step-by-step instructions for preparing fresh, tasty and healthy home-cooked meals as well as tips for trimming, processing, storing, and preserving cannabis. 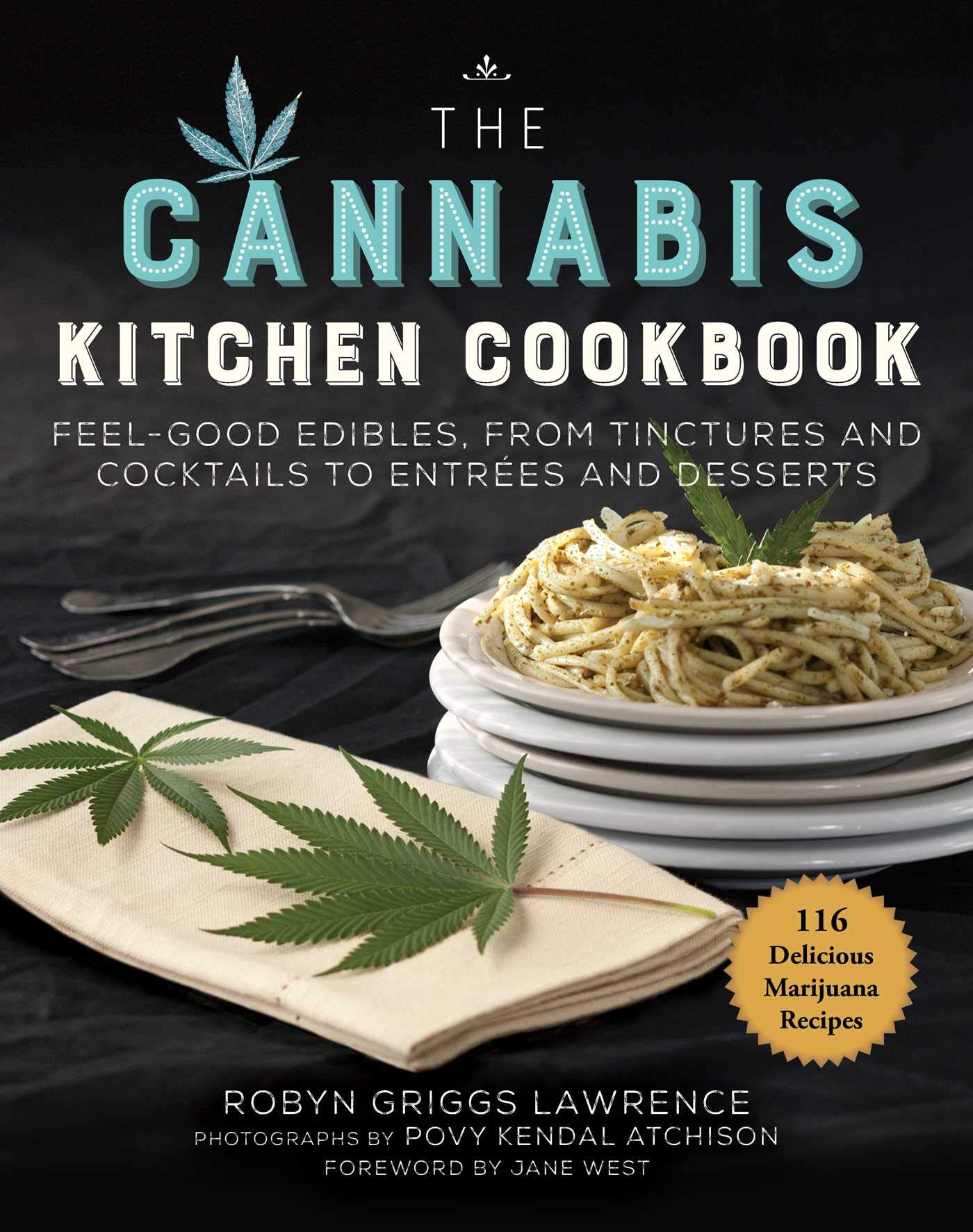 Courtesy of Amazon
Buy: The Cannabis Kitchen Cookbook $24.99
buy it

It’s no wonder this book has earned more than 2,000 glowing reviews on Amazon — it’s filled with innovative confections and lip-smacking salty bites like roasted beet hummus and Gruyére & green garlic gougéres by leading canna-chefs in California. This book was designed for cooks and bakers of all skill levels, and reviewers love the educational aspect that breaks down the science behind edibles, including terpenes and cannabinoids. Doses are set low, so if you have a higher tolerance, adjust the recipe’s quantities accordingly. 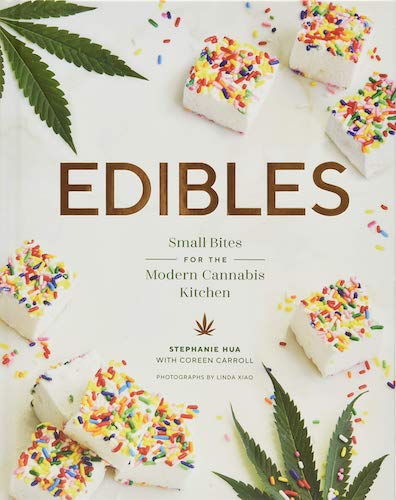 5. From Crook to Cook by Snoop Dogg

Want to eat and cook like Tha Dogg Father himself? The full title of Snoop Dogg’s marijuana cookbook sounds like something he came up with while he was high, which he probably did — From Crook to Cook: Platinum Recipes from Tha Boss Dogg’s Kitchen. Whip up some of Snoop’s OG edibles like Fried Bologna Sandwiches with Chips or easy and delicious faves like Soft Flour Tacos and Easy Orange Chicken. Snoop’s first cookbook, From Crook to Cook, also makes a great coffee table book and conversation starter. Learn to remix upscale classics like Lobster Thermidor and Filet Mignon for when you’re trying to impress that special someone. And, of course, no party is complete without the best drink recipes featuring Snoop’s go-to, Gin and Juice. 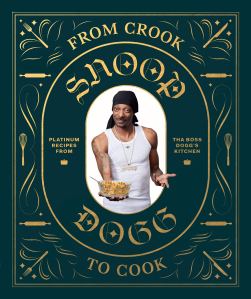 Courtesy of Amazon
Buy: From Crook to Cook by Snoop Dogg $12.74
buy it

When all else fails to soothe you, turn to the ultimate comfort meal: soul food. These 50 southern recipes all hit the spot, with classics like Mac & Cheese, Jerk Pork Chops, Corn Bread, and Smothered Okra with Shrimp. And yes, of course, it includes an infused take on one of the south’s most revered meals – chicken and waffles. Pass The Greens was written by soul food and cannabis lover Mrs. Green, who teaches home cooks how to medicate ingredients without altering their natural taste too much. 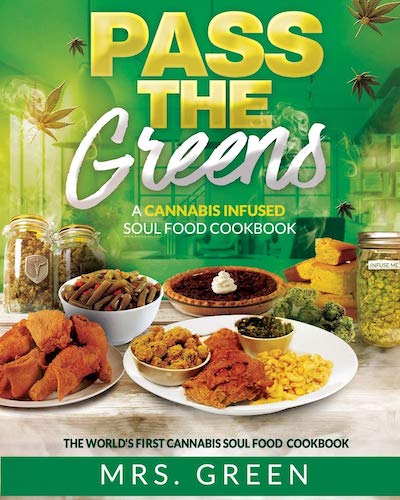 It began as a way to help a close friend’s mother manage pain and discomfort from her cancer treatments. It became one of the best marijuana cookbooks of all time. Sure, the author’s pen name JeffThe420Chef might not exactly inspire confidence, but The Daily Beast called them the “Julia Childs of Weed”. In his book, The 420 Gourmet, you’ll not only get delicious recipes to satisfy foodies and cannabis lovers of all types, but you’ll also enjoy gluten-free, vegetarian, vegan and kosher options to elevate the edible experience to tasty new levels. The “pot-sibilities” are endless. JeffThe420Chef also educates readers on safe dosing, summaries of the principal strains and their effects along with details on the herb’s medical and recreational benefits. 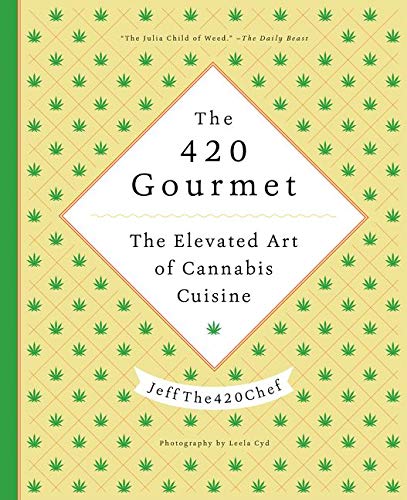 If you have a sweet tooth and also happen to love cannabis, this collection of recipes by Karin Lazarus is a must for your bookshelves. New York Magazine once called Lazarus “The Martha Stewart of weed baking”, and as much as we love the delectable recipes, this gourmet guide features equally breathtaking photographs of its masterpieces. The book is divvied up into categories including different kinds of baked goods, ice creams, and puddings. Although it’s marketed as high-end, the creations are still newbie-friendly. 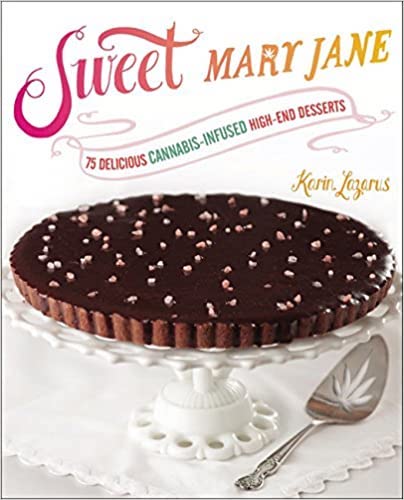 9. The Art of Weed Butter: A Step-By-Step Guide to Becoming A Cannabutter Master

Although recipes that earn Oohs and Ahhs make up the majority of this round-up, one thing is for sure: the basis of any successful infused recipe is a high-quality cannabutter. After all, you can’t just sprinkle weed into a batter and expect magic to happen. This guide focuses on perfecting your cannabutter in such a manager that preserves marijuana’s chemical components, including non-psychoactive compounds like CBD that offer health benefits. Aggrey’s book shows how to infuse cannabis into any oil, butter, or form of fat that you desire. 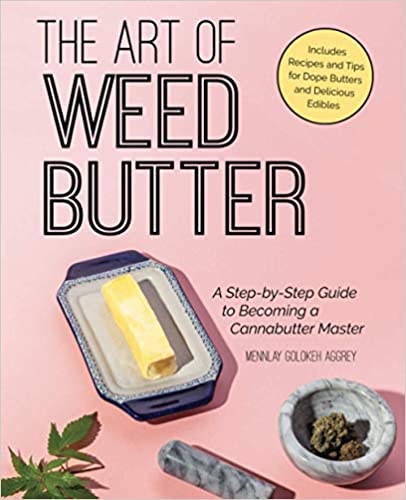 Image courtesy of Amazon
Buy: The Art of Weed Butter: A Step-By-Step Guide to Becoming A Cannabutter Master $14.95
buy it

The Vegan Cannabis Cookbook: Vegan Recipes For Delicious Marijuana-Infused Edibles is one of the best cannabis cookbooks for vegan potheads. Many people have made the switch over to veganism, which is healthier for our bodies and the environment. This recipe book by clinical psychologist and chef Eva Hammond, who believes that the way we eat should positively impact our bodies and brains. Ideal for vegans who don’t require a ton of illustration, as photos are minimal. Dive into addictive creations like her Acai and Cherry Almond Milk Smoothie, or Chocolate Orange Nut Clusters. 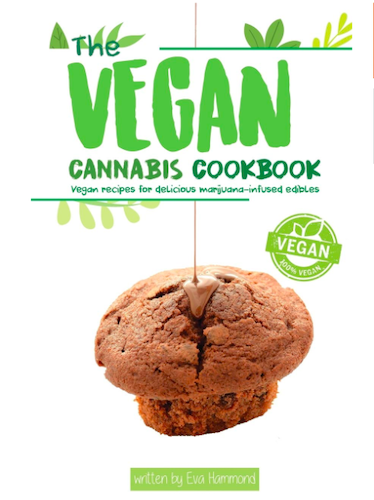 Why focus only on food when a beverage is such a nuanced art in itself? Cocktails aren’t just for alcohol-lovers, anymore. This book contains 75 recipes of cannabis-inspired cocktails and drinks, with details on shrubs, syrups, bitters, and infusions to integrate within a beverage. While some of the recipes can be hard to find, there are more accessible creations as well. The author is a pro in cannabis mixology and the book is densely packed with information, beginning with a thorough history of cannabis-based healing. 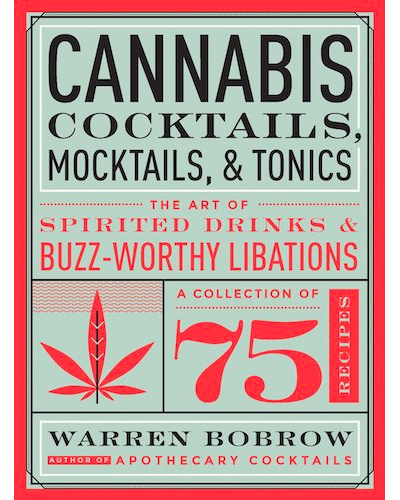 Courtesy of Amazon
Buy: Cannabis Cocktails, Mocktails, and Tonics: The Art of Spirited Drinks and Buzz-Worthy Libations $24.99
buy it

Go beyond the basic pot brownie with The Easy Cannabis Cookbook, a wildly popular cookbook filled with sweet and savory edibles for all kinds of ganja connoisseurs. Her book is divided up into sections like Breakfast, Main Meals, and Snacks, but contains an essential chapter called Staples, which shows you how to make infusions with all sorts of bases, from Cannabis Pesto to Marijuana Mayonnaise. These marijuana recipes are flavorful riffs on classics and not just for esoteric foodies, meaning that ingredients are easy to find, and dishes are automatic crowd-pleasers. 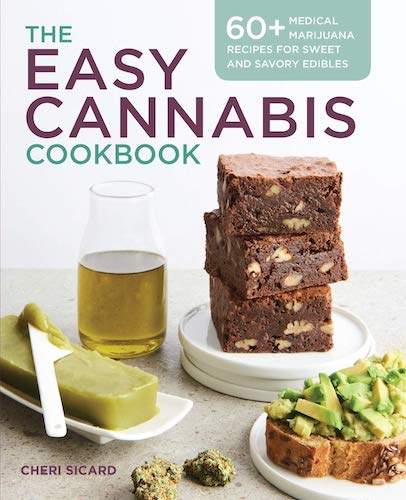 13. Cooking with Cannabis: Delicious Recipes for Edibles and Everyday Favorites by Laurie Wolf

Food writer and recipe developer Laurie Wolf is no amateur when it comes to cooking – she’s a graduate of the Culinary Institute of America and has written recipes for tons of high-profile magazines and websites. Attractive enough to be a conversation-starting coffee table book, Cooking with Cannabis contains step-by-step pictures so you can easily follow along with every recipe. From bacon-wrapped shrimp to infused watermelon and feta salad, these concoctions aren’t complicated to make, and still contain a bevy of explosive tastes. 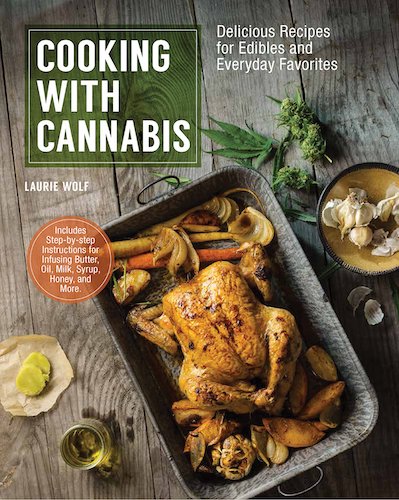 14. Edibles for Beginners: A Cannabis Cookbook

For a lot of people who haven’t cooked with cannabis before, diving into the world of edibles can feel intimidating. A helpful first step is this cookbook catering to newbies, titled Edibles for Beginners: A Cannabis Cookbook. The recipes consist of low doses, but they’re anything but basic thanks to inventions like Cantaloupe-Lime Pops and Garlic-Parmesan Popcorn. There are even vegan pages for those who live a plant-based lifestyle. A bonus perk is Chapter 2, which details a flavor guide to different marijuana strains. 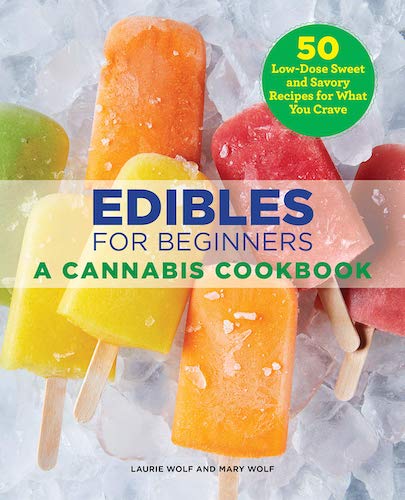 Image courtesy of Amazon
Buy: Edibles for Beginners: A Cannabis Cookbook $11.63
buy it

Savory edibles not your thing? Don’t worry – this dessert cookbook has it all thoroughly covered, from candies and cakes to cookies and brownies. This work details information like the difference between THC and CBD, but what really caught our eye is the distinctive array of recipes, like luscious Chocolate-Covered Cherries, Indian Sweet Carrot Pudding, and Pavlov with Canna-Raspberry Sauce. Cannabis might have health benefits, but when it’s baked into delicacies like this, it becomes beautifully indulgent. 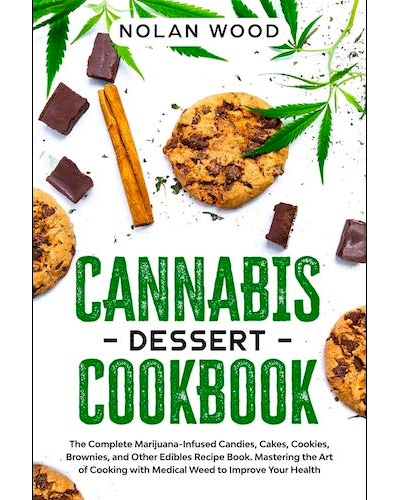