From cooking an entire meal in one pot to providing years of durability thanks to its tough exterior to being safe to use in several capacities, the dutch oven is the best sous chef for any kitchen. Sometimes known as casserole containers, the dutch oven is a heavy pot that is usually made from cast iron. With the ability to be used both on the stovetop and in the oven, the dutch oven is one of the most versatile kitchen accessories available.

Because of its rounded shape and fitted lid, many people only think of dutch ovens as useful for soups and stews. But they’re so much more than that. Roast a whole chicken, braise meat, bake bread, make spaghetti with a meat sauce and more, all with only dirtying one pot.

What To Look For In A Dutch Oven

Dutch ovens are available in several sizes. Since they are an investment, opting for a larger size that can handle a whole chicken or turkey is useful for big meals, but if you don’t have room to store a larger dutch oven or will typically be using it only for small meals, you may want to choose something smaller.

Like size, the shape is also important. For meat-based dishes like poultry or fish, an oval shape is a better fit.

Keep the lid in mind. Some dutch ovens feature lids that can withstand the same high temperature as the base, but less expensive models may use a plastic handle that can only be used in the oven up to a certain temperature.

How We Chose The Best Dutch Ovens

The dutch ovens we’ve included on our list below are all cast iron with enamel. The enamel makes the dutch oven easier to clean and does not require seasoning like more traditional cast iron pots and pants. While some may be safe for the dishwasher, it’s a better idea to hand wash your dutch oven, which will help preserve the enamel. Dutch ovens should always be thoroughly dried before being stored and should never be stacked on top of or under other dishes. All the dutch ovens included on our list are made by brands that have a proven track record for durability and high-quality kitchenware.

Check out our favorite dutch ovens below and start cooking!

The Cuisinart Chef’s Classic Enameled Cast Iron 7-Quart Round Covered Casserole has a cast iron construction that provides superior heat retention and distribution, evenly cooking food in the oven, broiler or stovetop. Backed by its highly regarded name, the Cuisinart features cast iron construction that keeps the heat evenly distributed throughout. The porcelain enamel exterior and interior are not only attractive but durable, with the interior protected against absorbing odors or impairing the flavor of the food. The Cuisinart is safe for the dishwasher, and the knob provides a secure grip on the lid, which is safe to use in the oven.

Pros: Large size for big meals, heat is evenly distributed throughout, won’t absorb odors even after extensive use.

Cons: The Cuisinart chips after many uses, especially if put in the dishwasher. Like many high-end dutch ovens, the Cuisinart is extremely heavy.

The Lodge 6 Quart Enameled Cast Iron Dutch Oven features porcelain enamel over cast iron to create a durable and finish that can go from the fridge to the oven. Lodge advertises their dutch oven as a pot that can go from marinating a meal in the fridge to cooking in one pot in the oven. Available in six sizes and 12 colors, the Lodge has a stainless steel knob and loop handles for easy carrying. Designed to evenly distribute heat, the Lodge won’t react to ingredients. Although dishwasher safe, Lodge recommends hand washing their dutch oven, while avoiding metal pads or utensils, which can chip the enamel.

Pros: Safe for storing food in the fridge, available in several sizes and colors, dishwasher safe if necessary.

Cons: Chipping in the enamel may occur after many uses. 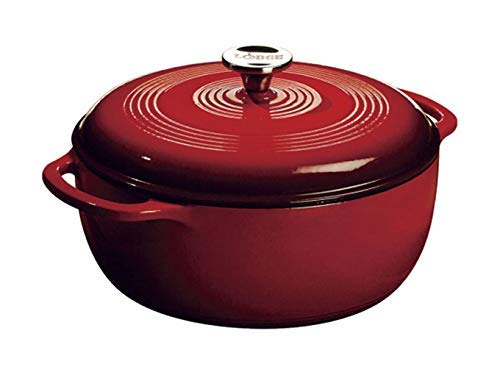 The AmazonBasics 4.3 Quart Enameled Cast Iron Dutch Oven has loop handles for easy lifting and a secure lid. This 4.3-quart option provides a smaller option for those who are new to cooking with a dutch oven or are looking for a smaller pot that is more suitable for one person, but the same pot is available in larger sizes and four color options. Ideal for side dishes, the dutch oven retains heat and evenly distributes it for precise cooking. The AmazonBasics can be used on all types of stovetops, including barbecues and in the oven, but should be handled with caution on glass and ceramic tops and not be dragged or risk scratching the bottom of the pot.

Pros: Affordable price point, retains and evenly distributes heat, can be used on stovetops or barbecues. 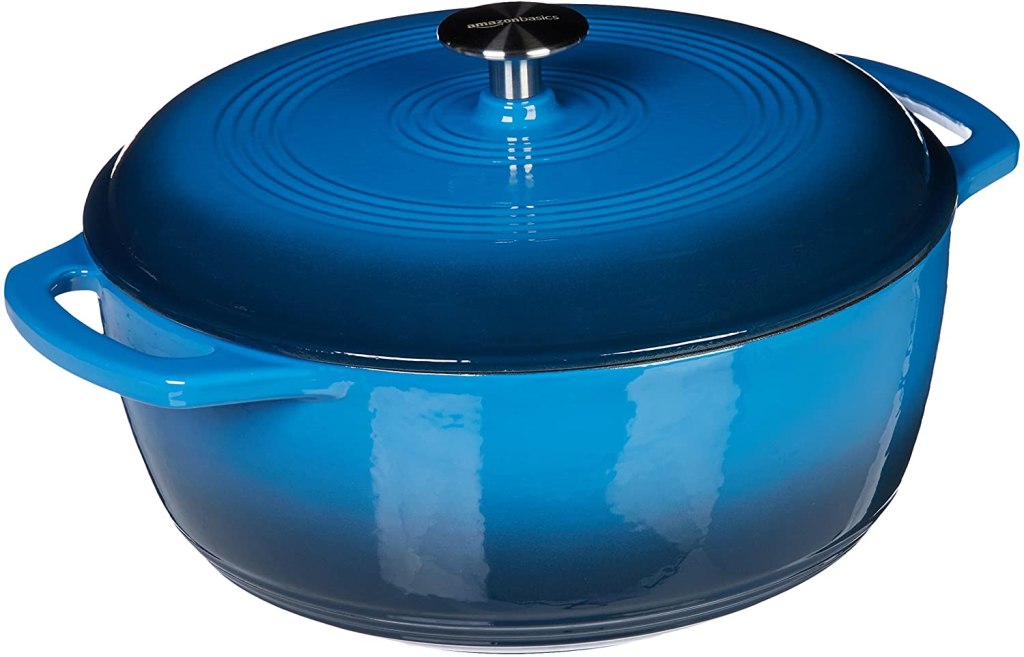