So you want a ticket to flavorville (or, you know, flavor-town, if that’s your preference) without having to board the smoke express? Or what if you want to cook up authentic char-grilled taste but live in the city, in an apartment or anywhere you don’t have a big yard open to the wild blue yonder? You know, a place where no neighbors will complain if you cook over a real wood fire, just like the Denisovans used to fifty thousand years ago, and the Homo heidelbergensis half a million years before them.

Well, we Homo sapiens may not have invented fire, or grilling, but we are the first species to create smokeless indoor grills, so there’s that. Indoor grills differ from their outdoor counterparts in five ways:

Ready to start grilling up your favorite dishes indoors in all seasons? Here are 13 of the top-rated indoor grills for the charbroiled flavor without the look of “rolling coal.”

This electric searing grill from Hamilton Beach fits 4-6 servings of grilling into a compact, portable form. It’s easy to clean yet has enough volume to let the juices breathe and give that smoky flavor. 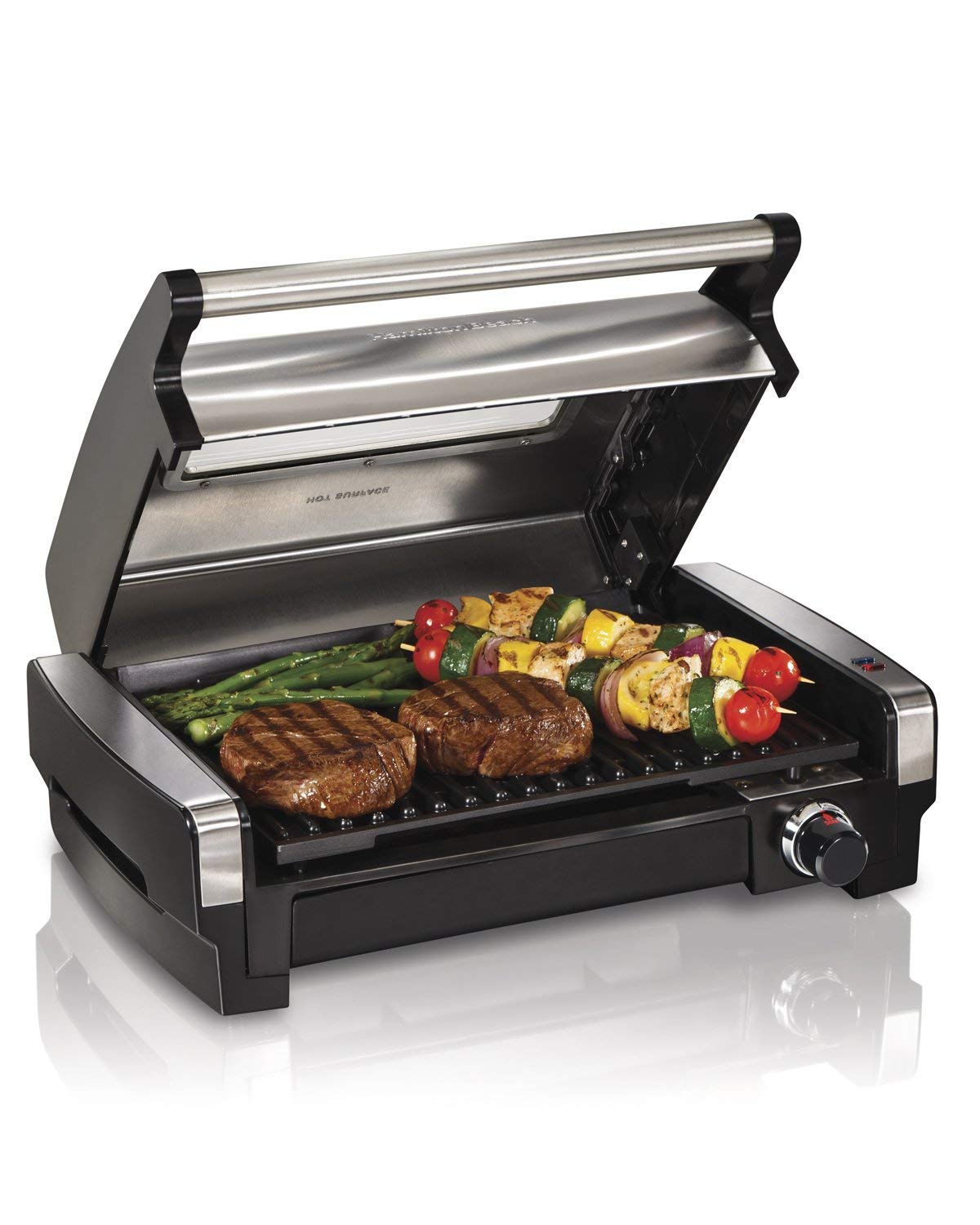 You don’t actually have to spend a lot to start grilling indoors. The Ovente Electric Cooking Grill weighs in at just under $40 yet it can cook up burgers, steaks and sausages to your taste buds’ delight. The 1000 watts of power provided by this grill mean you won’t notice much difference between an outdoor, charcoal grill and this smoke-less version. There’s a built-in temperature control and a 13-by-10-inch plate with plenty of space for a small meal. Plus, the handle is built to always stay cool to touch for your safety.

The MegaChef Reversible Indoor Grill is a countertop appliance that can grill up delicious meals and act as a griddle, too. This gives you the best of both worlds, allowing you to maximize your countertop space. Both plates are non-stick, so you won’t need to worry about too much clean up, and the grill has a fat run-off to help you cook up healthier meats. The grill itself can heat up to 450 degrees Fahrenheit, and the cooking area is 165 square inches in total, giving you slightly more space than the smallest indoor grills but still allowing the possibility of portability. 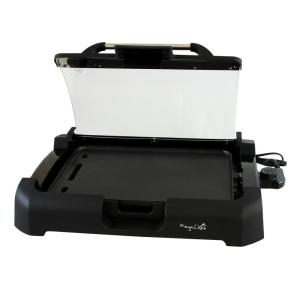 If you want an indoor grill that’s every bit as beautiful as it is functional, look no further than the Gotham City Steel Ti-Ceramic Electric Indoor Grill. This gorgeous grill has a black and copper exterior to blend in with the most modern of kitchens. Beyond its good looks, this indoor grill is made of ceramic so that the surface heats evenly for better cooked food than traditional grills can provide. Plus, the countertop appliance boasts a temperature dial with four easy settings. This grill provides a cooking area of 224 square inches and a maximum temperature of 450 degrees Fahrenheit. 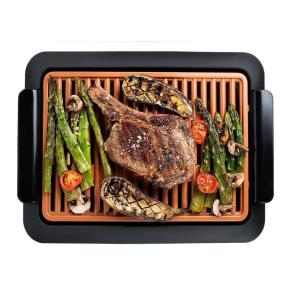 For an indoor grill that can seemingly do it all, consider the Cuisinart 5-in-1 Griddler. This George Foreman-esque countertop device has two reversible plates. Both plates have both a grill and a griddle side, and the lid opens to 180 degrees. This allows you to use the lid plate as a second additional grill or griddle if you need more surface area and aren’t cooking food that needs to be pressed. That’s how you get the five-in-one functions. You can either have a grill with a press, a full grill, a panini press, a full griddle or a griddle and a grill simultaneously. Adjustable temperature controls, indicator lights and an integrated drip tray add to the easy use of this Cuisinart device. 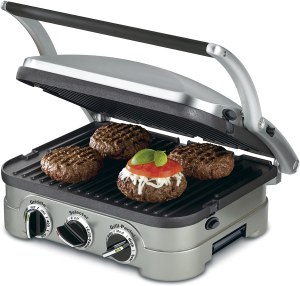 A grill and griddle in one, this indoor electric range offers about 180 square inches of cooking space, making it versatile enough for fish filet, corn, bell peppers, brisket, hash and even breakfast favorites like pancakes and scrambles. 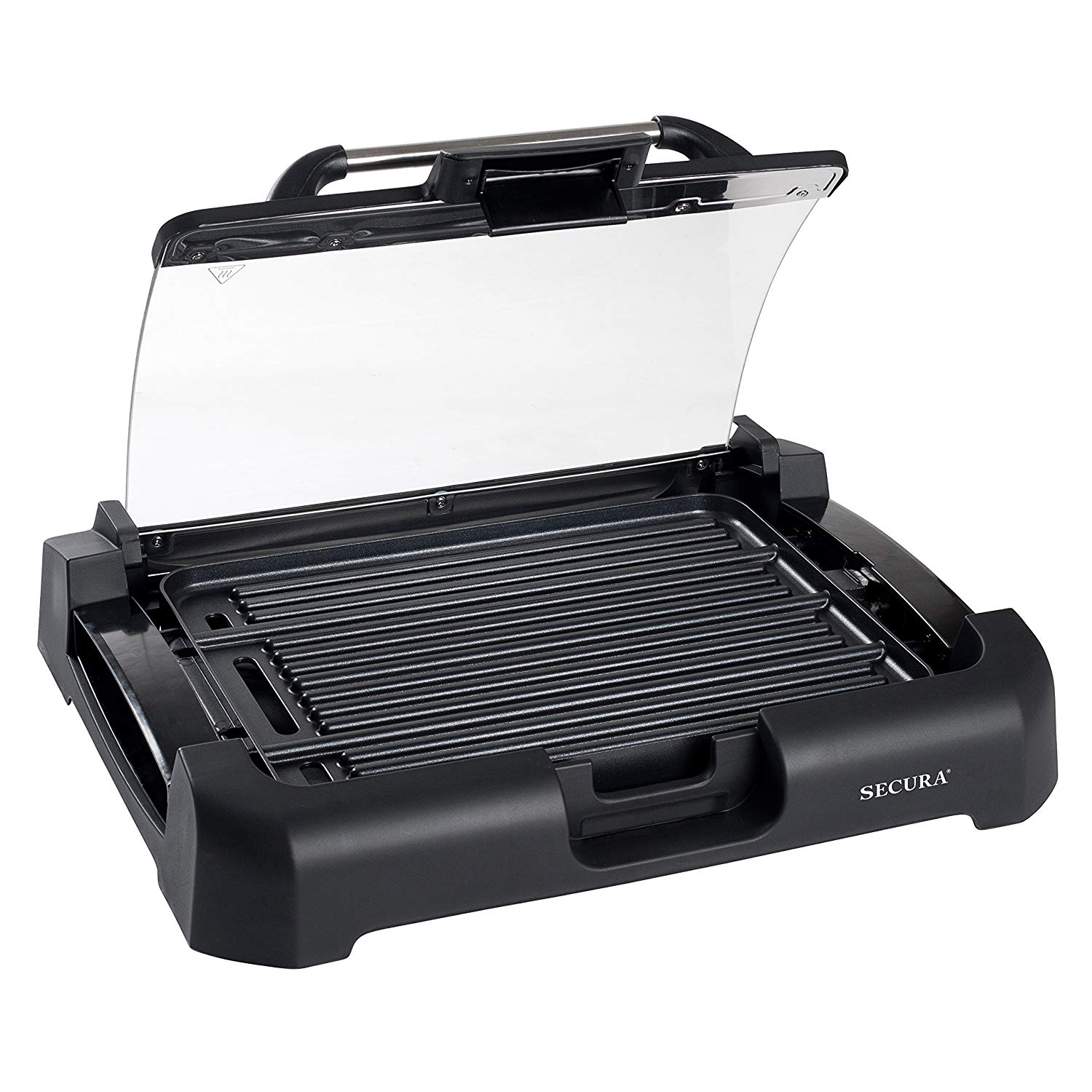 BEST FOR COOKING AN ENTIRE MEAL

Have you ever tried the Swiss dish Raclette? If not, you’re missing out. This cheesy dish is made by grilling/melting blocks of Raclette cheese and then serving the gooey goodness alongside potatoes and other accompaniments. To make it, however, you need to have a specialized grill, like this Techwood Raclette Grill. This countertop device includes eight pull-out grill pans in the bottom for the cheese. But, this raclette grill is good for more than just melting cheese. The top is a traditional, 18.5-by-19-inch smoke-less grill, while the bottom could be used to heat sauces or cooking sides, too. 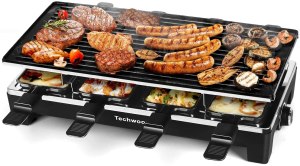 Thanks to innovative technology, the PowerXL Smokeless Grill provides the same barbecued flavors you can achieve on an outdoor gas or charcoal grill. The reversible grill and griddle plate is nestled inside a metal and plastic box with a tempered glass lid. Shutting the lid would normally create lots of smoke, but the PowerXL Smokeless Grill includes a “Turbo Speed Smoke Extractor” to ensure safe barbecuing indoors. The device will plug into any outlet and boasts 1200 watts of power for quick and efficient grilling. 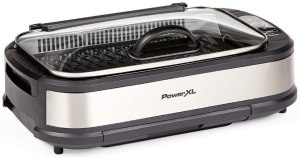 One of the biggest reasons people only grill out in the summer is because of the weather. While some might invest in both an indoor, smoke-less grill and a traditional, outdoor grill, you certainly don’t have to thanks to the George Foreman Indoor/Outdoor Electric Grill. This all-weather, electric grill can stay outside in the elements, but if you don’t want to battle the wind or snow yourself, you can move it inside. The base is removable, too, meaning you can use this on your balcony or your countertop. Five temperature settings allow you to cook a variety of foods, and the heating plate is big enough to prepare 15 servings at once. 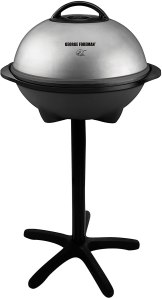 If you don’t want to add an additional countertop appliance to your kitchen but you still want the awesomeness of grilled food year-round, try a grill pan. These pans can be used on your stovetop but have deep ridges to mimic grilling. They can also be placed directly on an outdoor grill top if you’re trying to cook something that keeps falling through the grates. The Staub Round Double Handle Pure Grill Pan is a cast iron ridged pan that can go from stove to oven to grill without an issue. The sought-after French brand produces this pan in four attractive colors, from matte black to turquoise. 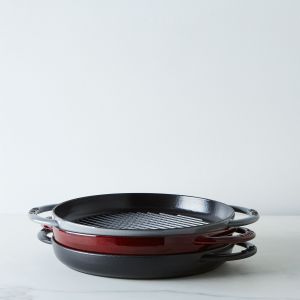 Ninja first introduced us to smart pressure cooking. Now, they’ve worked their magic again with the Ninja Foodi Smart XL 6-in-1 Indoor Grill. This countertop appliance is an intelligent cooker in that you tell it what protein you are cooking and how well you want it cooked, and the device figures the rest out. It even features 500 degree cyclonic air and a 500 degree grill plate to offer the char-grilled marks you love in traditional barbecue. In addition to grilling, the Foodi can also bake, roast, air fry, broil and dehydrate, giving you an appliance that can handle just about any meat you throw at it. 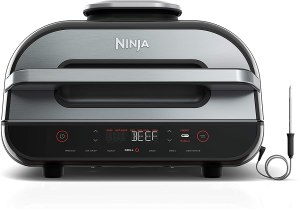 The Philips Smokeless Indoor BBQ Grill is one of the most innovative appliances on our list. This easy-to-store grill boasts dual infrared heaters complimented by special reflectors that heat up the grill plate to a consistent 446 degrees Fahrenheit without any hot spots. Furthermore, this grill doesn’t produce any smoke thanks to its always-cool drip tray. Normal grills smoke when grease and fat contact hot surfaces, but Philips has solved this problem by ensuring the cold drip tray collects all the juicy run-off instead. With 1660 watts, the Philips Smokeless Indoor BBQ Grill is a great choice if you’re in search of a powerful appliance that can do everything your outdoor grill can, just more efficiently. 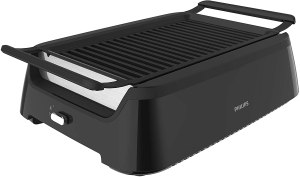 If you consider yourself a grill master, and you really want to have a grill top built into your kitchen or outdoor living space, look no further than the Kenyon Texan All Seasons Built-In Electric Grill. Kenyon has built a name for itself by creating electric grills that integrate seamlessly with existing countertops, and the Texan Grill is no exception. This indoor/outdoor grill boasts two independently controlled grill plates that can heat up to 600 degrees Fahrenheit in minutes. It also has a dual lid, allowing you to work with one half of the grill closed and the other open should you be cooking different foods for the same meal. With this awesome cooker installed on in your kitchen, whether that’s indoors or outdoors, you’ll never need a traditional grill again. 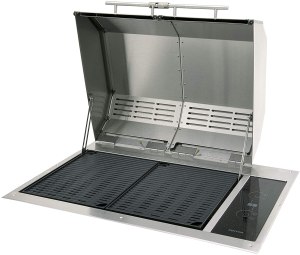 The 8 Best BBQ Cookbooks For Vegans