Despite a shared name, Korean BBQ is pretty radically different from American BBQ. If you’re unfamiliar, Korean-style BBQ is typically just as much of a show as it is dinner; the food is often cooked right in front of you at the table, allowing you to take in the full aromas of short rib, vegetables, and other items while they cook. But you can also bring that experience into your own home kitchen with a grill of your own.

Most Korean barbecue grills are pretty cost-effective, meaning you won’t have to spend nearly as much on one as you would an American grill. They can be used on various heat sources, meaning there’s definitely an option that works for you. However, standalone options use their own electrical source if that’s more of your vibe. The grills’ design also allows for extra fat to drain right out of them, so be sure to keep something nearby to collect the drippings.

No matter what you plan to grill, make sure that you’re doing it in one of these popular Korean BBQ Grills—our picks, below.

With its inherently aluminum construction and nonstick coating, this Korean BBQ Grill from TeChef is a fantastic grill option. The swirled channel, accented by a striking patterned design, actively helps the oil to drain slower to provide a greater depth of flavor to your foods. Additionally, it helps to drain the extra fat off your food in a more effective manner. And, it’s completely dishware safe while also being oven safe up to 450. 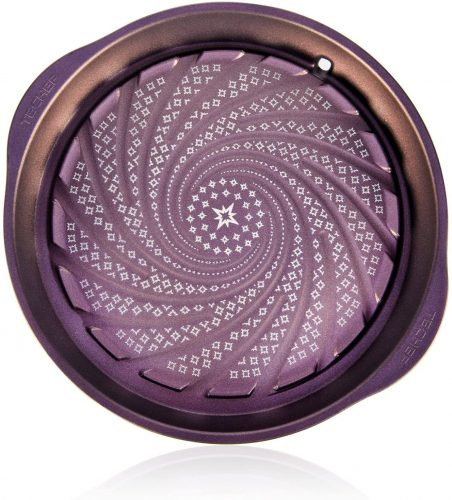 Kitchen + Home’s Korean BBQ Grill isn’t specifically billed as a Korean BBQ, but it has many of the same features you’d want if you’re considering purchasing one. The slightly spiraled grate allows for heat to be evenly distributed across the food you cook on top of it. Adding a touch of water to included drip pan can not only make clean-up easier after the fact but also allows for a slight amount of moisture to work its way into your food, providing a richer taste. And you can use it on both gas and electric stovetops without worry. 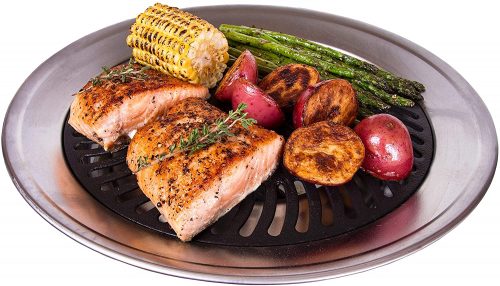 Some might say that using an electric Korean BBQ Grill is cheating, but having the flexibility and control to adjust the grill to a specific temperature is always worth the extra dollars. That’s certainly the case with this Korean BBQ Grill from Elite Gourmet, which offers five adjustable settings up to 450° for all your individual cooking needs. The 14″ surface area means you can really pile on the meat and veggies and have dinner ready in no time flat. Plus, the grill, slide, and grease collector are all dishwasher safe, making cleaning up after a breeze. 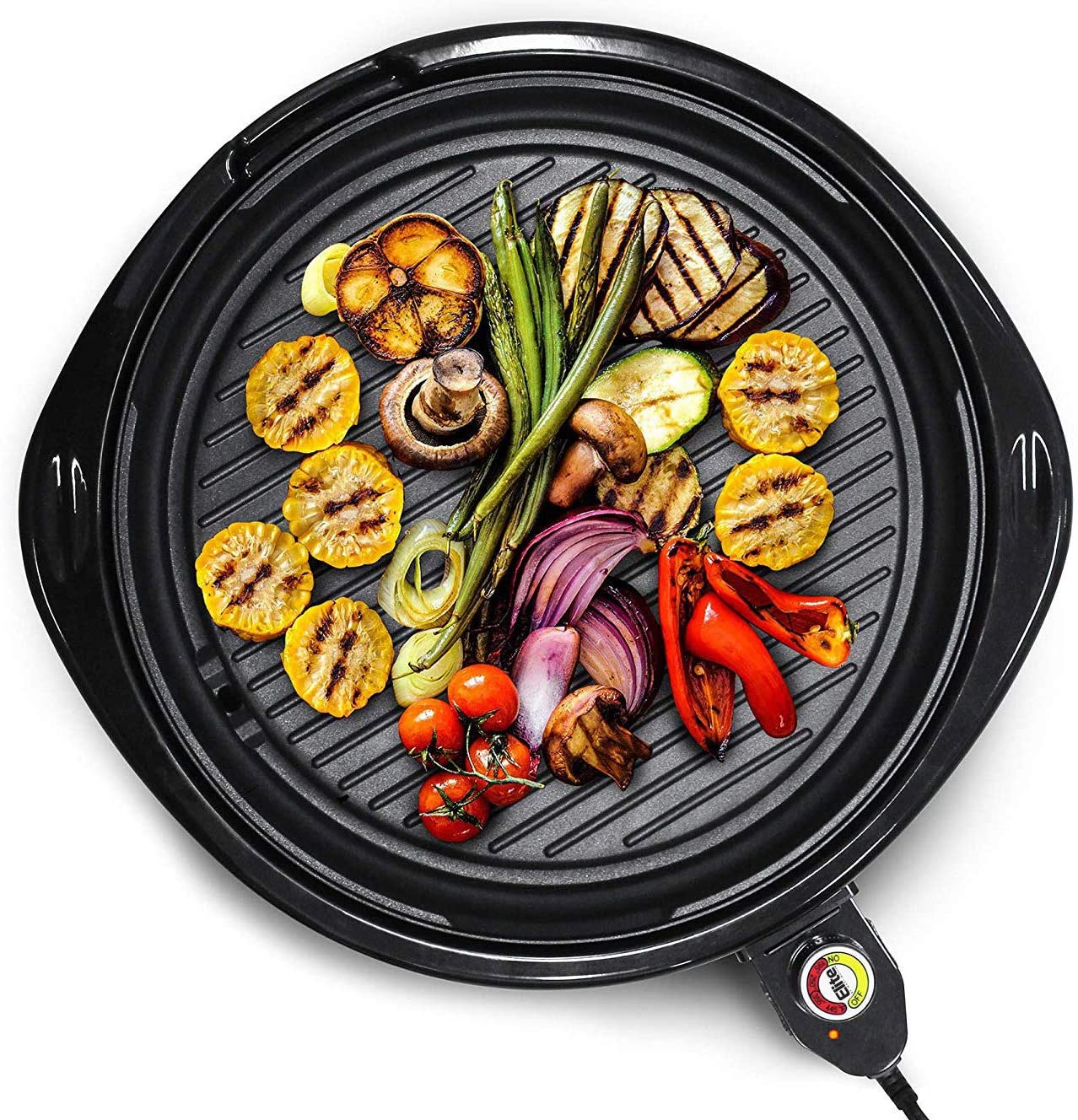 It might be hard to tell just from a photograph, but the grate on this second TeChef Korean BBQ Grill has a slightly domed design to them which allows for the fat to easily drain off the meats you’re grilling. A Teflon coating on the grate itself allows for great nonstick abilities, ensuring you won’t have anything left behind when it’s time to eat. Plus, it’s designed and made in Korea to ensure the best possible Korean BBQ grill experience. 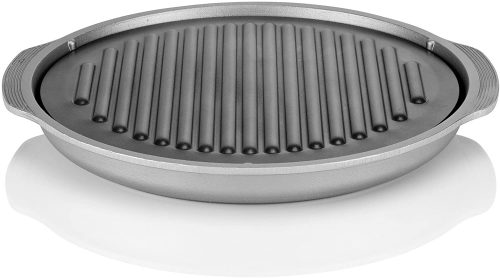 This Korean BBQ Grill pan from Chefway might actually look more similar to a traditional grill top than your standard Korean BBQ Grill. Still, there are some convenient features here, most notably the included draining spout. While you’ll actively need to position the grill so it can drain during the grilling process, the ability to have it drain as you cook will save you cleaning time later. Capable of being used across all stovetops, your food will cook evenly and quickly. 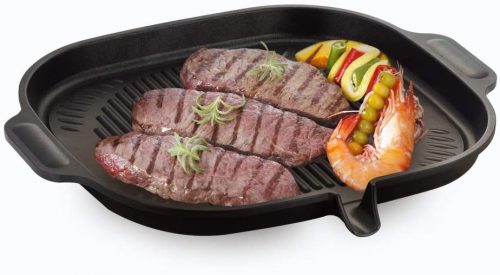 The rounded, domed shape of this Korean BBQ grill from CookKing is done to really help that pesky grease (literally!) slide right off your food as it cooks. The multi-layer nonstick coating helps to ensure your pork belly or short rib doesn’t come apart when you’re flipping it. And while the unit itself is best used on a gas stove, you can use it on any heat surface without worry. 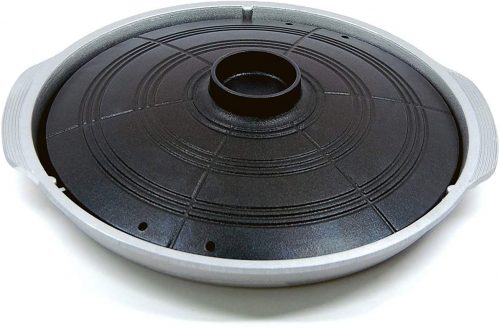 With a four-quart capacity and an 11-inch surface area for cooking, this electric Korean BBQ grill from Aroma Housewares packs a powerful punch. It won’t take up a lot of space in your home but allows you to fully grill and cook various foods (even a personal pizza!) The minimalist design is easy to understand, easy to clean, and even easier to use. Plus, you can set the temperature to make sure your food doesn’t get overdone. 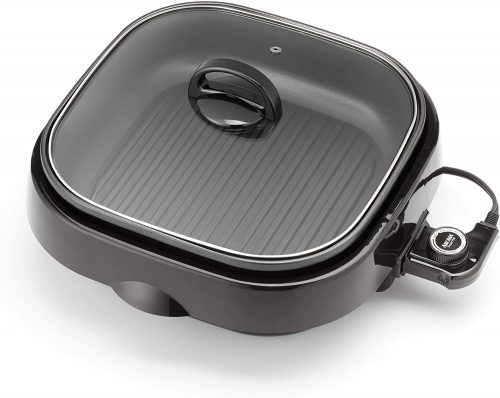 We’ve talked about the benefits of cast iron before, so incorporating that unparalleled heat retention and overall superior quality into something like a Korean BBQ Grill like this selection from Eutuxia seems like a no-brainer to us. The nonstick coating on this will provide no irritation to your food. Additionally, the divided sections allow you to cook a handful of food items all at once. Of course, there’s even a small hole to help provide a steady flow for draining. 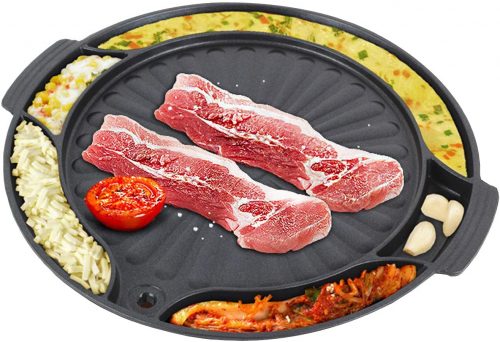