Whether you’re an aspiring bartender or an up-and-coming home cook, you need the best paring knife in your kitchen.

Paring knives, also known as peeling knives, are the small knives you never use from the cheap knife set you bought that one time, but that’s a mistake. Because of their small size, paring knives are the perfect kitchen or bar tool for precise, delicate tasks like cutting small foods like garlic or peeling fruits and vegetables. If you know what you’re doing, you can even peel veggies with stiffer skins, like cucumbers, or de-vein shrimp.

While a half-decent paring knife can be used for a lot of these cleaning and preparing kinds of tasks, some have different features that make them more useful for particular prep tasks.

Now that we know a bit about paring knives, check out our picks for the best paring knife below. Thankfully, given their small size — 3 to 3.5 inches is standard — and utility, there are many great cheap options out there to consider and really no matter what you pick up, you’re likely to find something that works for your needs.

For a no-lose spear point paring knife, we recommend the Victorinox Paring Knife. At 3.25-inches, this razor-sharp blade makes precise cutting, trimming and paring a piece of cake. It even handles dicing of larger fruits and veggies too, so whatever your small cutting needs are, this paring knife won’t let you down.

For another great paring knife, we like the Henckels Forged Premio Paring Knife. You can count on the German stainless steel to make quick work of any fruits and vegetables whether peeling or cutting. It’s super sharp, has a decent but not too hefty weight, perfect for letting the knife do the work, and it won’t separate from the handle because this a forged knife, which means the knife is essentially one piece of metal. Lastly, at 3 inches long, this blade offers maximum control for precision cuts.

And if all that’s not enough, it’s dishwasher safe too. 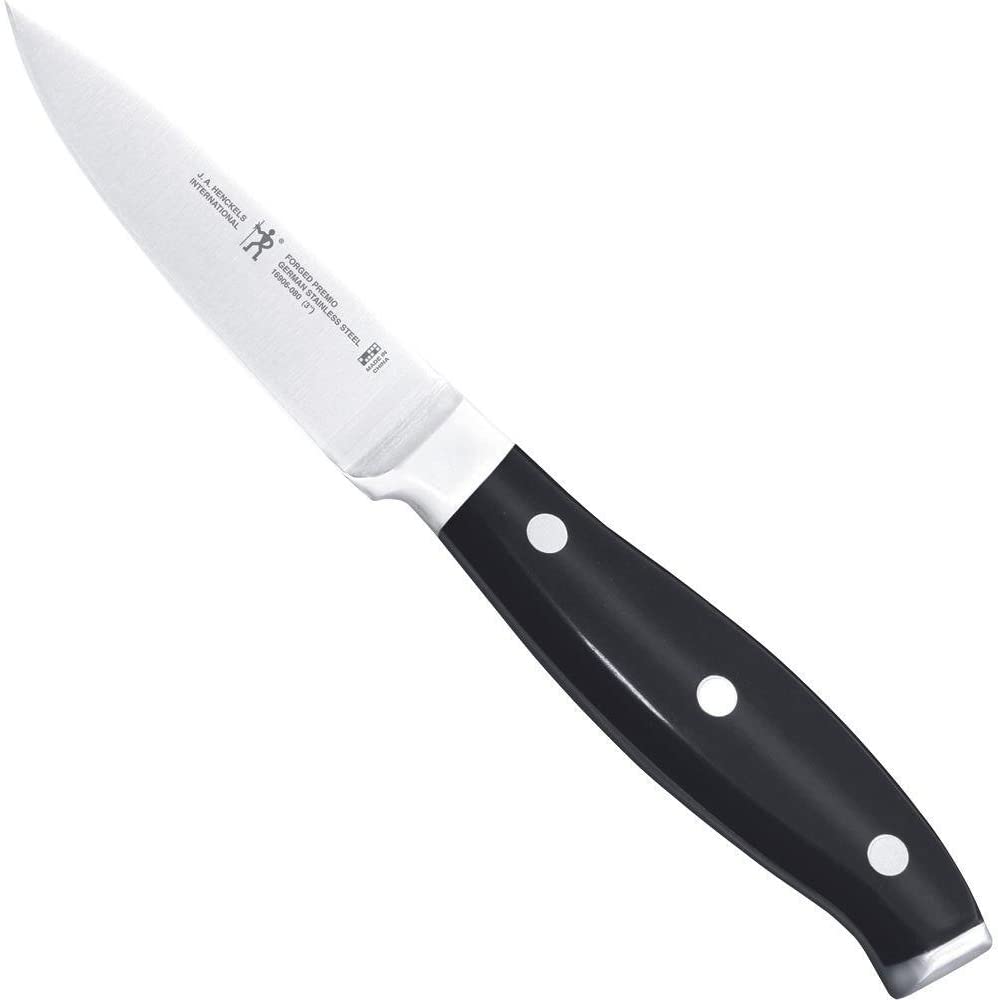 We like the Mercer Culinary Renaissance Forged Paring Knife for a few reasons. Of course, it’s got high carbon German stainless steel, but we also like that the blade is forged, with a full tang, delivering optimal balance and durability. The 3.5-inch blade also makes cutting or peeling larger produce easier, which, if you plan on doing a lot of slicing, can be really helpful. 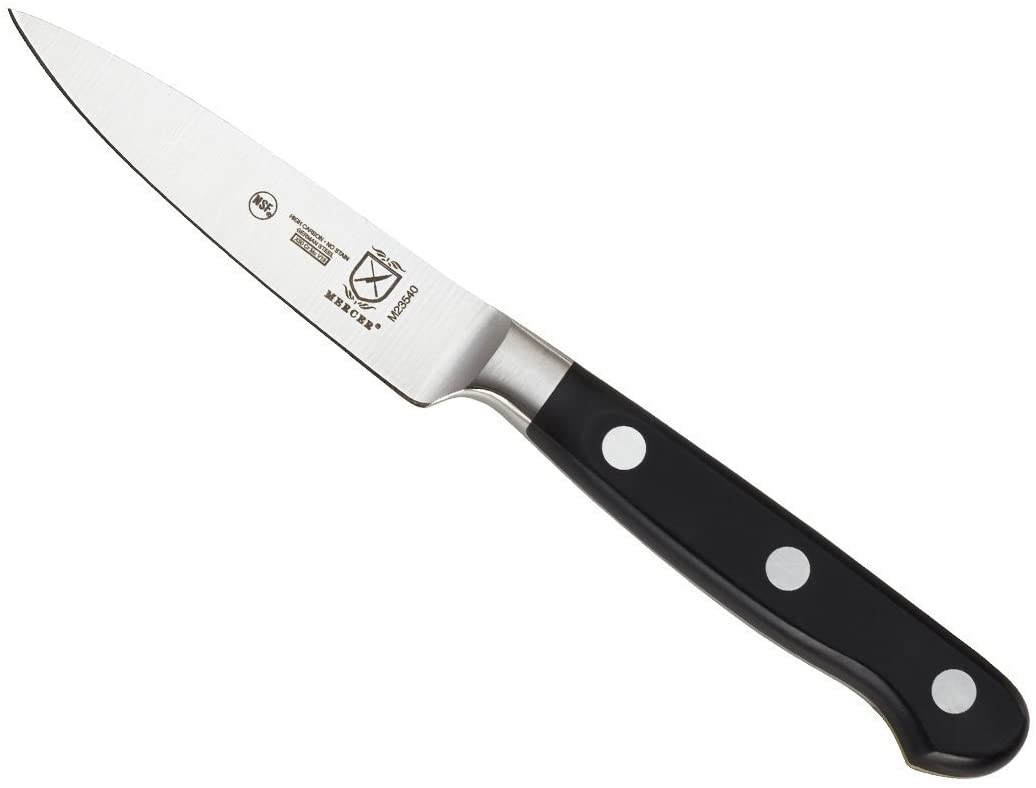 Up front, we have to say we don’t think you need to spend this kind of money for a paring knife, not even the best paring knife. But for those looking for a top-of-the-line paring knife from a known-for-its-quality knife brand, look no further than the Wusthof Classic Paring Knife.

We could get into the scientific nitty-gritty about what makes this knife great, but we’ll just say this instead: There’s a reason actual chefs and legit home cooks choose Wusthof, so if that’s your aspiration, go for the brand the pros choose.

Though most people will likely be OK with any of the above paring knives, if you’re in need of a bird’s beak knife, go for the Crisp Bird’s Beak Paring Knife. The curved blade is great for peeling or cleaning out fruits and vegetables, plus, the stainless steel blade is nonstick. And if the blade ever gets dull, use the dual-function cover/sharpener to bring the edge back up to speed.

Once you start dealing with bigger produce, you might want to consider a different knife or cutting tool altogether. But if you’d rather leave the chef’s knife at home and just bring along a larger paring knife, the Victorinox Cutlery Utility Knife will be perfect. With a 4-inch blade, the knife is small enough to handle precise tasks decently while still having enough blade to slice through larger items. Not to mention, it’s Victorinox, so you can count on the quality and sharpness of the stainless steel blade. 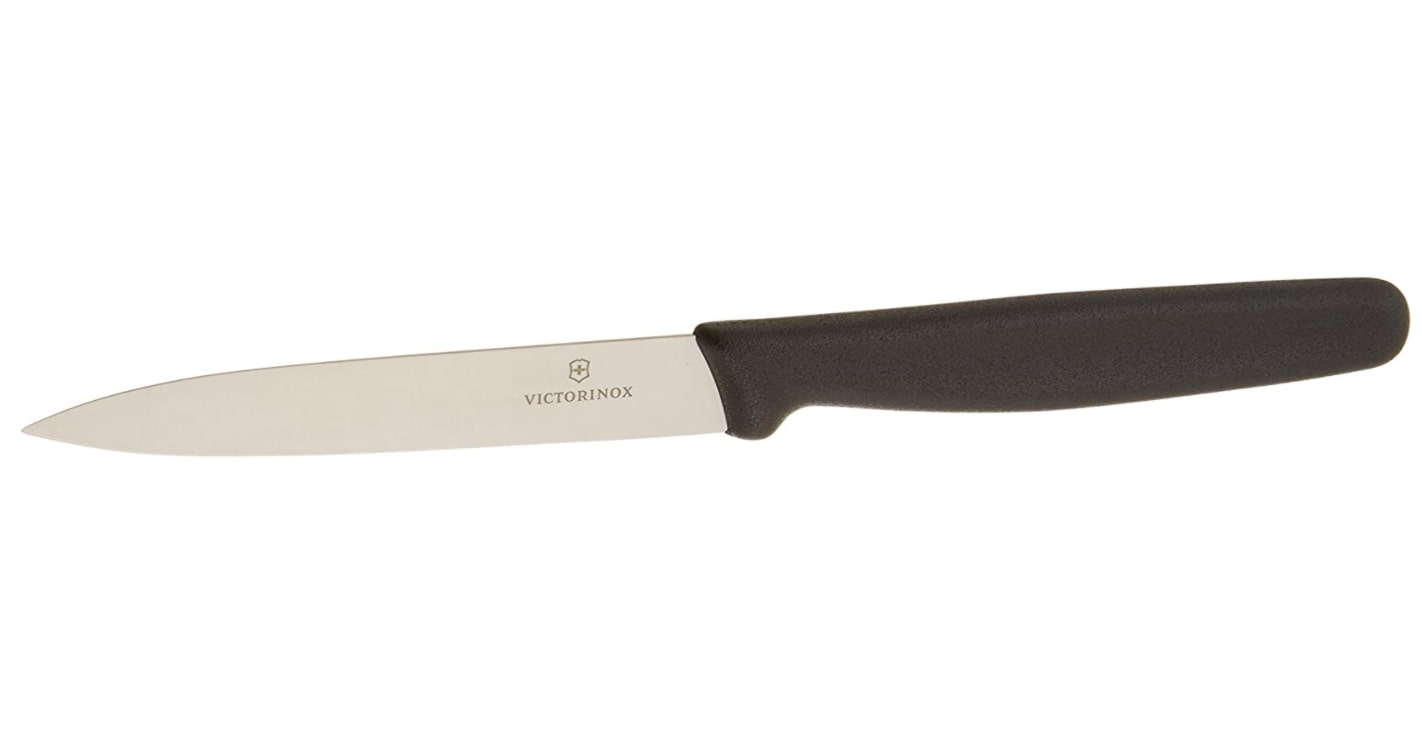 For any blade, ceramic makes for a great alternative to stainless steel because it can maintain its edge for a lot longer before it needs sharpening and will never rust. The Kyocera Advanced Ceramic Revolution Series 3-Inch Paring Knife uses a proprietary zirconia ceramic for excellent sharpness and edge retention, and it’s also lightweight and well-balanced. Just be careful not to bend it. It’s ceramic, not metal, so it doesn’t bend; it snaps. 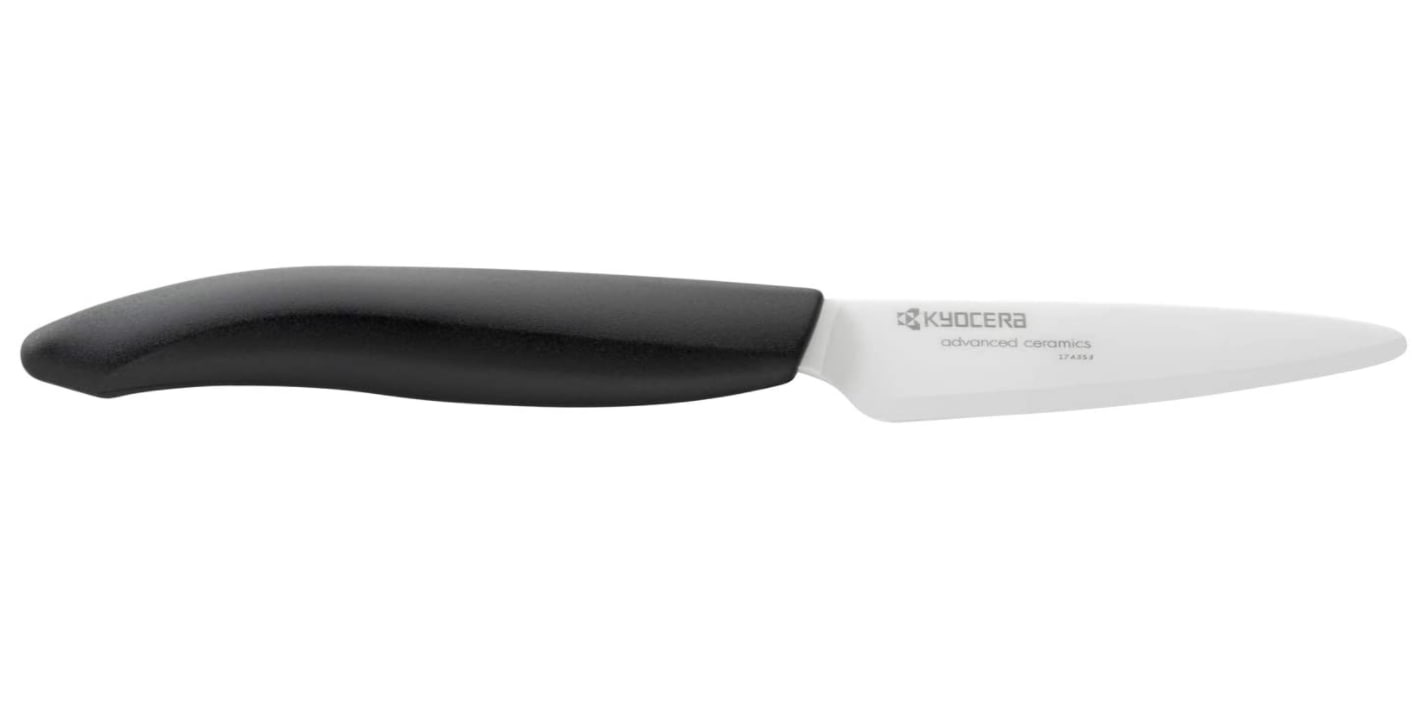 Is there anything more frustrating than slicing produce and having it pile up on the side of the blade? OK, there are many things more frustrating than that, but thankfully that’s one small headache you can avoid with the Mercer Culinary Non-Stick Paring Knives. Made from high-carbon Japanese stainless steel, each of the 4-inch razor-sharp knives in this super cheap three-pack has a non-stick coating. Way less food will stick to the blades as you slice through food, and you can extend their lives by using the included sheaths. And even if you find one of the blades is a dud, you’re getting three paring knives for the price of one from the other guys, so there’s a really good chance you’ll more than get your value out of these paring knives before they get dull. 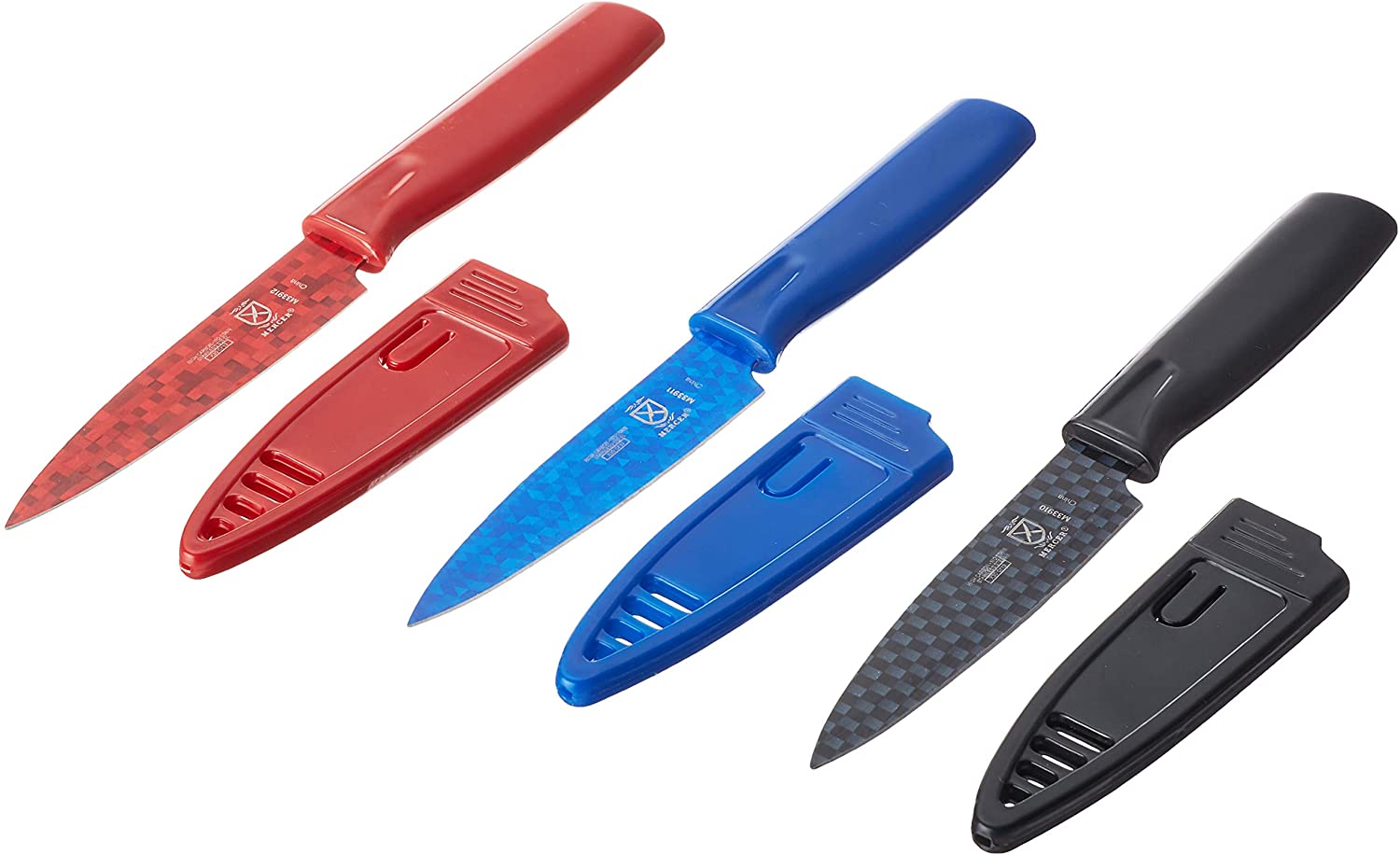