Whether you consider yourself a Top Chef or a novice in the kitchen, one thing most people struggle with is cooking food to the right temperature. Depending on what you’re cooking, the wrong temp can at the least mean an inedible meal and at the worst mean food poisoning (chicken, we’re looking at you). With a sous vide, users can easily ensure their food is always cooked to the appropriate temperature, resulting in meat, fish, eggs and vegetables that are packed full of flavor and juice without any added salt or seasoning.

Sous vide translates from French to ‘under vacuum,’ which is essentially how the food is prepared. A sous vide is a long cylinder that attaches to the side of a pot filled with water and circulates the water, heating it at the same time. Users set the time and temperature depending on what they’re cooking and then add the item to the water after it’s been placed in a sealed plastic bag. The food is clipped to the side of the pot and cooks in its own juices, retaining all the original flavor, ensuring its tender and not dried out or undercooked. There’s no need to continually monitor the sous vide like you would when cooking on a stovetop or in the oven. Once the sous vide is done cooking, users can grill, sear, or broil the food to add a crispness to the outer layer.

Sous vides’ have been used in restaurants for years, but thanks to an upswing in interest, non-professionals can now afford to purchase their own temperature cooker to use at home. We researched the best sous vides to add to your kitchen and these are some of our top picks.

What is a Sous Vide?

Sous vide is a French phrase that means "under vacuum" — which roughly explains how the food is prepared when using the tool. Meat, fish, veggies or whatever else you're preparing is sealed inside a plastic bag and clipped to the side of a pot of water. A sous vide is a cylindrical tool that attaches to the side of the pot and circulates the water at a certain temperature, cooking the food inside the bag.

What is the best Sous Vide?

Our editors have selected the Breville Joule as the top sous vide for two years running. It offers up to 1,100 watts of power and can connect to your phone via Bluetooth. The only downside is that this popular sous vide can only be controlled by your phone as opposed to manually. If that's a problem, then we would recommend the Anova Culinary Sous Vide Precision Cooker instead.

What Can You Cook With a Sous Vide?

Sous vides are known for cooking meat really well, as it's almost impossible to undercook meat or dry it out when using a sous vide. You can cook meat, fish, eggs, veggies inside a sous vide and then take them out after the cycle and sear or crisp up for added flavor.

How Expensive Are Sous Vides?

Sous vides vary in price and, like any cooking tool, you can buy more expensive ones that are higher quality and more budget-sensitive ones for beginners. Most cost between $70-$200, so make sure you assess how much you'll use it, what your needs are and what your skill level is before making your choice.

Keep control of your cooking even when away from the kitchen using the Breville Joule Sous Vide. The Joule comes with an app that enables users to control their cooking settings from their smartphone using either Bluetooth or WiFi. An Exclusive Visual Doneness feature in the app shows users what their food should look like once it’s done cooking, while also including hundreds of cooking guides and tips from top chefs. Precise to 0.2 degrees Fahrenheit / 0.1 degrees Celsius, the Joule boasts 1100 watts of power and heats up to 40 liters of water quickly.

Cons: Can only be controlled with a smartphone and not manually. 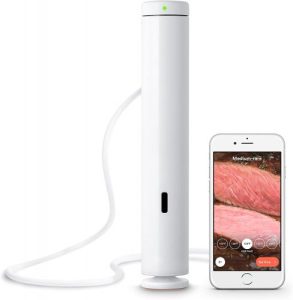 The Anova Culinary Sous Vide Precision Cooker can be controlled manually and through the Anova app to help users get perfectly cooked vegetables, meat, eggs and more. Circulate water at a precise temperature for perfectly cooked food with the Anova that can fit on any pot or container and with 750 watts of power, it can cook enough food to serve up to four people at once. Keep food tender and moist with the Anova, which comes with an app filled with recipes and tips. The Anova has recently been redesigned and is now two inches shorter than its predecessor, making it easier to fit the sous vide into kitchen drawers when not in use.

Pros: The Anova comes with a Bluetooth-only app to control the sous vide, but unlike the Joule, it also can be controlled manually for those who don’t have smartphones or don’t want to use their phone.

Cons: Not as powerful as some other options. 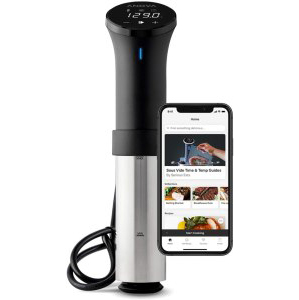 For a straightforward, easy-to-use manual sous vide, try the Instant Pot Accu Slim Sous Vide Immersion Circulator. The Accu Slim is made by Instant Pot and the company recommends using the sous vide with an Instant Pot, but it can be attached to any pot or container that is six to eight quarts deep. Users manually set the temperature and time on the sous vide and then sit back as the machine circulates water to cook food. Cooking time can be adjusted between one minute and 72 hours and the temperature can be set in increments of 1 degree between 68 degrees and 203 degrees F.

Pros: The Accu Slim comes with an app that includes recipes.

Cons: The Accu Slim stops cooking once the timer goes off and users don’t have the option to add extra minutes. 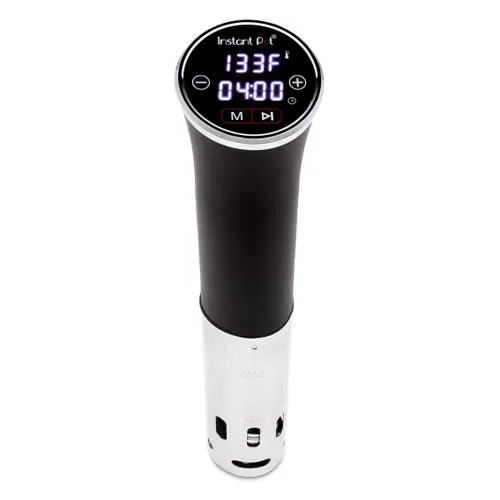 Anova makes a variety of sous vide cookers, and while they all look different, it can be hard to tell the substantive differences between them. The major difference between the AN500 and the Nano, also featured on this list, is the power. The Nano is 740W, while this option is 1000W. If you’re looking for a more powerful sous vide cooker, then this pick is one of the best options. The device disassembles for easy cleaning, and the built-in clamp makes it easy to attach to a pot. You can use the app to control the sous vide, making cooking from the couch an attainable dream.

Pros: Connects to an app for easy controls. Intuitive interface. Easy to clean.

Cons: Can be somewhat loud. 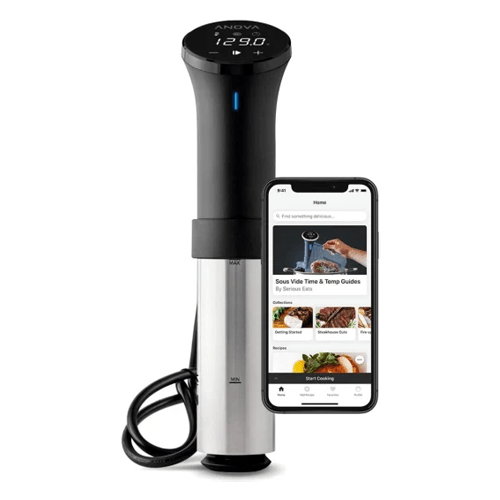 This sous vide cooker from KitchenBoss has a robust 1100W of power, allowing you to cook a variety of different meals. It has a temperature control function and a variety of controls on the top panel, making it easy to use, and you can easily attach it to any large pot using the adjustable clamp. As affordable as this option is, it’s an even better deal thanks to the inclusion of 10 vacuum seal bags.

Pros: Powerful and less expensive than some other options.

Cons:  Instructions could be better. 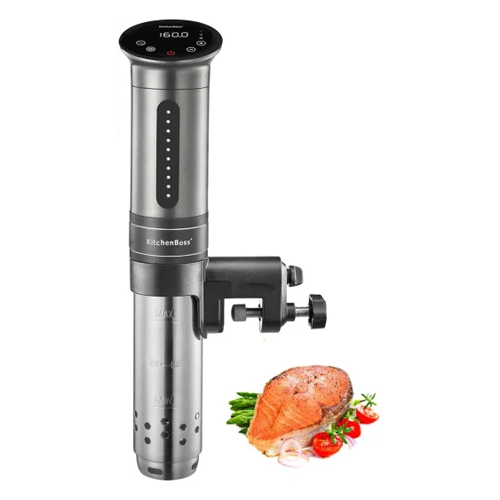 Cook food with precision up to 0.18 degrees F with the RODONI Ultra Slim Sous Vide Machine. The Rodoni is designed with a streamlined white body and a durable stainless steel sleeve. The Rodoni has a temperature range of 32 degrees to 203 degrees F and the timer can be set by minutes or hours. The manual sous vide doesn’t require the use of a smartphone and boasts 1000 watts of fast and quiet heating power.

Pros: The Rodoni is the most affordable sous vide on our list and has a max cooking time of 99 hours, which is the same as the high-end Joule.

Cons: No app capabilities or support. The buttons aren’t as user friendly. 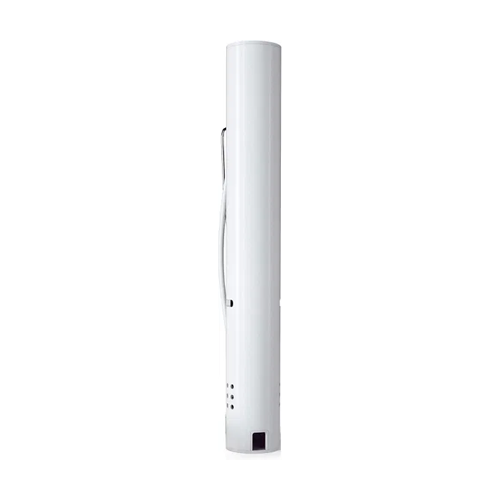 This sous vide from Inkbird is an affordable alternative to some of the top brands. It has 1000W of power, and the intuitive digital display allows you to see the temperature and finetune settings. The sous vide connects using WiFi, allowing you to control it from your phone. The clip easily attaches to any large pot for cooking.

Cons: App could be better. 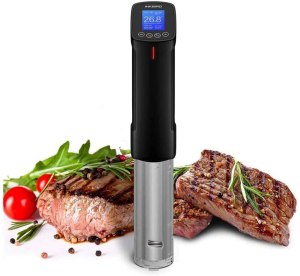