One of the many lessons lockdown has taught us is that we really took our local Mexican and Tex Mex restaurants for granted. In fact, according to Twitter users, Mexican restaurants are the number one thing Americans in quarantine miss. It turns out guac, unlimited margaritas and tortilla-based foods have become an essential part of our lives.

But necessity is the mother of invention, and many Americans are now starting to prepare Mexican food feasts at home. If you’re one of those people, the best way to take your Tex-Mex feasts to the next level is to start making your own tortillas.

This might sound super complicated, but tortillas are some of the easiest breads to make. It’s even easier when you have your own tortilla maker. These devices press tortillas into the perfect shape so all you need to do is create the dough, roll it into balls, press it and throw it on a griddle for a minute or two.

Making flour or corn tortillas really is that easy:

As you have the power to make your own tortillas at home, you’ll need to choose whether to make traditional corn tortillas or flour “wraps” for your tacos, burritos, flautas, fajitas and tostadas.

However, each one has dishes for which it’s better suited. Corn tortillas are more useful for tacos, tostadas, chips, taquitos and enchiladas. Flour tortillas can be used for tacos, burritos, fajitas, flautas and quesadillas. These tortillas are ideal when a larger wrap is needed, as in quesadillas and burritos.

Once you’ve decided which type of tortilla you want to make, take a look through the best tortilla makers and tortilla making accessories available for your at-home Mexican creations.

Alright, let’s get down to business with the best tortilla makers. These six presses can help you create better-than-store-bought goodness at home. Don’t let these devices intimidate you. To get started, you only need one of the devices below, a simple recipe and Youtube tutorials.

On Amazon, there’s one tortilla maker that rises above the rest. That’s the Victoria Cast Iron Tortilla Press. This cast-iron creation boasts more than 3,000 five-star reviews, which is three times more than the closest competitor. Because of its popularity, this press does sometimes go out of stock. But, don’t worry. It always returns to the Amazon “shelves” quite quickly. The device itself is rather simple. Two heavy-duty plates are pressed together using a reinforced lever, allowing you to create delicious tortillas anytime you need them. You can choose from a six- or eight-inch press, although we recommend the larger option for homemade tortillas. 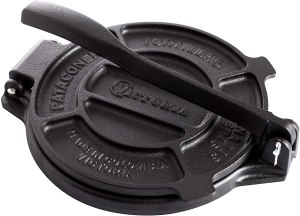 While most tortilla makers are presses, that doesn’t mean pressing is the only way to make these Mexican food staples. For centuries, people made tortillas by rolling out the dough, which is exactly how you can make yours if you have the OXO Good Grips Silicone Dough Rolling Bag. Simply place your dough inside the bag, and use a rolling pin to roll it out to your desired diameter and thickness. The bag is printed with measurements for your convenience, and it’s dishwasher safe, making for super easy cleanup.

Slightly lighter and definitely more colorful than the Victoria Tortilla Press, the Suonabeier Cast Iron Tortilla Press is made from cast aluminum and coated in food-safe red paint. The lever design makes it super easy to create delicious tortillas without the need to roll each one by hand. In addition, the coating on this kitchen appliance is non-stick, meaning corn tortilla and roti dough won’t attach itself to the plates. Plus, the coating also makes the press easy to clean with just the wipe of a damp cloth. For a fun and festive tortilla maker, you can’t beat this Suonabeier model. 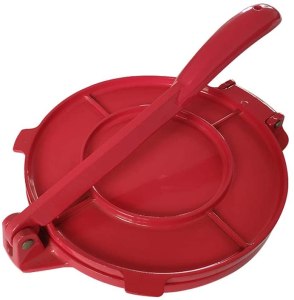 Not every dish can be made with a standard eight-inch tortilla. If you love hefty burritos or mega quesadillas, you’ll need a tortilla maker that can produce tortillas at least 12 inches in diameter. That’s where the M.D.S. Cuisine Tortilla Press comes in. This commercial-grade press is made of heavy duty iron and square in shape rather than round, allowing you to make all sorts of flat bread creations. Alternatively, if you don’t need to make huge tortillas, you could also use this press to create more than one tortilla in a single go. 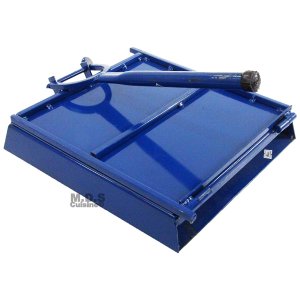 The Central Coast Woodworks Hardwood Tortilla Press is a work of art that creates culinary delights. The press is handmade from quality hardwood for durability. It’s then coated with mineral oil and beeswax to make it food safe for years to come. As an added bonus, this wooden press has a slightly larger surface area than most circular ones. It measures 9.75 inches by 10 inches. However, keep in mind that these kitchen tools may vary slightly in grain pattern and wood color, but that does mean that your tortilla press will be unique to you. 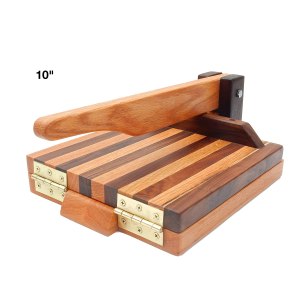 For more precise tortillas, a roller rather than a press is preferable. The M.D.S. Cuisine Cookware Tortilla Maker Roller creates 5.5-inch tortillas every time thanks to the included cutter. In addition, the roller can be adjusted for tortillas of varying thicknesses. Plus, the wooden handle makes cranking the device easy, so you can create dozens of tortillas in no time. This device is made from cast aluminum for durability, and it can be used to create tamales in addition to corn tortillas, making it a multifunctional device for Mexican food preparation. 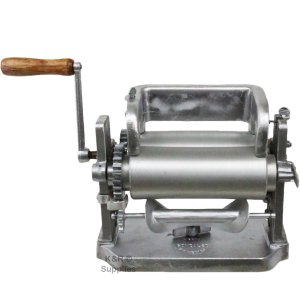 While a tortilla press or roller will help you create round pieces of dough, you’ll need a few other accessories to perfect the art of making tortillas at home. Below, we’ve listed four of the most helpful pieces for your kitchen experiments, from standard parchment paper to tortilla holders that make it easy to make hard-shell tortillas with a frying pan.

When making tortillas in a press, you’ll likely need to use either plastic wrap or parchment paper to keep the dough from sticking. We prefer this KooK Round Parchment Paper as they’re the perfect size for most presses. Simply put one of the rounds on top of the bottom plate, then place your dough on the paper. Position another round of parchment paper over the dough, and press the second plate down to create your tortilla. As an added bonus, these rounds make cleanup a breeze. 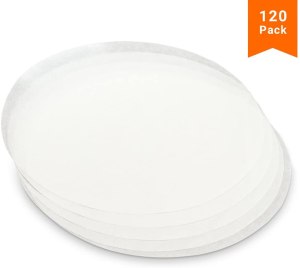 You don’t want to stand around making tortillas all night while everyone else enjoys dinner. So, you’ll need to make them in advance. But doing so means they won’t be hot off the griddle when served. That’s where a tortilla warmer comes in. These baskets keep the tortillas pleasantly heated until you can get them on the table. And, if you don’t happen to get all of them to the table quick enough, most tortilla warmers are also microwave safe. We recommend the Nordic Ware Microwave Tortilla Warmer for its functionality and design. 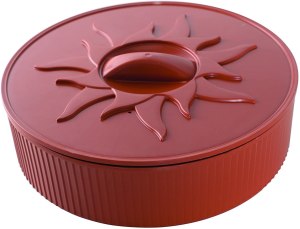 If you’ve ever tried to sit a taco down half way through, you’ll know that’s a recipe for disaster. You’ll end up with fillings all over your plate. The only way to prevent a taco from caving under the pressure is to either buy hard shell tacos that are flat bottomed or create your own using the Make it Real Mi Taco Stand. These metal contraptions mold baked or fried tortillas into more useful shapes for standing up. They work with both flour and corn tortillas, so you can take any of your homemade tortillas up a notch. You’ll wonder how you ever ate a taco shell without a bottom after trying these for the first time. 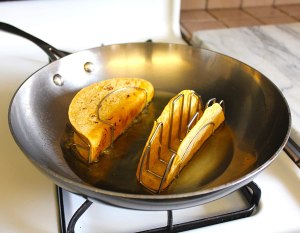 Just because you have a tortilla press doesn’t mean you know how to make tortillas. That’s why you need to invest in a good cookbook to go along with your new kitchen gadget. The Ultimate Tortilla Press Cookbook by Dotty Griffith shows readers the exact steps needed to create scrumptious flour and corn tortillas as well as flavored tortillas and some tortilla spin-offs, like sopes and gorditas. Griffith then shares her wisdom with tips and tricks for using a tortilla press before including readers with recipes for tacos, enchiladas, fajitas and other Tex-Mex delights. 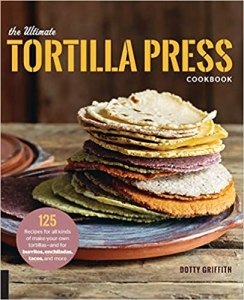