There is nothing like creating a kitchen concoction using a cast iron skillet. The naturally non-stick surface makes cooking with this material a dream, while the ability to take your pan straight from the stovetop to the oven or vice versa provides a freedom you can’t find in many other kitchen items. Add into that an evenly heating cooking surface, and you can see why there has recently been an increase in the popularity of cast iron.

While many believe a solid cast iron skillet requires more attention and care than the average non-stick or stainless steel pan, the reality is that looking after an all-metal pan is surprisingly easy, if done correctly. Just remember, you shouldn’t use harsh soap or steel wool to clean cast iron. It won’t ruin the pan, but it will take away the seasoned element of your skillet. Below, we’ll run through how not to clean cast iron as well as the instructions for properly washing and restoring cast iron cookware.

Add Comment
1 Person Commenting
Mike
4 years
Look for the Crisbee Cast Iron Seasoning picks to finish off a proper cleaning! It's all I...

How NOT to Clean Cast Iron

Before we dive into how to properly wash and restore your cast iron, let’s first talk about what you should never do to a cast iron pot or pan. There are a few big no-nos to watch out for.

Add Comment
1 Person Commenting
Mike
4 years
Look for the Crisbee Cast Iron Seasoning picks to finish off a proper cleaning! It’s all I…

Notice that we didn’t say, “Never use soap.” This is a really common misconception with cast iron. Yes, you can use a small amount of mild soap to clean your pots and pans. However, harsh soaps or even large amounts of mild soap can strip the seasoning off cast iron. Therefore, if you are going to use soap, be sure to do so sparingly and carefully.

How to Clean Cast Iron Properly

Now that we’ve covered what not to do with cast iron, it’s time to outline the steps for properly cleaning your cookware after each use. Once you know how to clean cast iron, the process will become as second nature as washing any dish.

If for some reason, you can’t or don’t follow the proper steps for cleaning cast iron after use, don’t despair. You can easily restore rusty cast iron or reapply the seasoning. Read on for more information.

How to Restore Rusty or Stripped Cast Iron

Accidents happen, and if your cast iron has been stripped of its seasoning, you’ll need to work a little bit to get your cookware back in tip-top condition. First of all, note that if your cookware is showing only a little rust, all you need to do is scour the rust and then follow the directions outlined above to finish the cleaning process. But, if the rust problem persists or if you have a major amount of rust on your pan, follow the steps below for re-seasoning your cast iron.

It’s important to remember that you’ll naturally need to re-season cast iron two to three times a year. Otherwise, cleaning and maintaining cast iron really isn’t as labor-intensive as its reputation might suggest.

We’ve put together a list of 16 great cleaning supplies for keeping your cast iron in top condition. All of them are available for under $40, so there’s really no excuse for improperly cleaning your skillet.

Inside this 8-ounce bottle, you’ll find Kohler’s Cast Iron Cleaner. This effective cleaning agent can be used on cast iron or other surfaces, like sinks, to remove scuffs, blemishes and unwanted marks. The cleaner will leave your surfaces dirt free and looking as good as new. 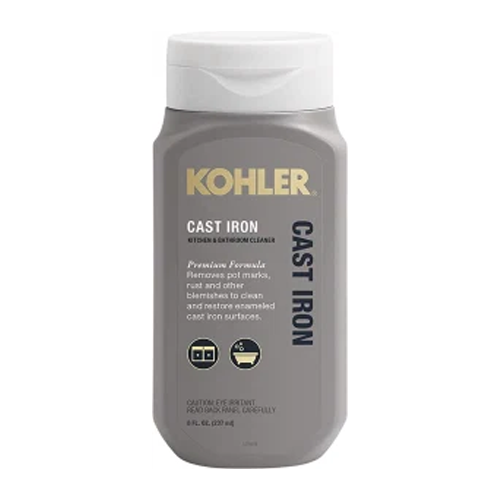 As we mentioned above, it’s a good idea to add a thin layer of oil to your cast iron pots and pans after they’re clean and before you put them back in the cabinet. Vegetable oil is recommended for this process thanks to its high smoke point, affordability and availability, but canola oil, flaxseed oil and melted shortening can also be used. Simply put a few drops on a paper towel and cover your cast iron. Wipe away any excess with a clean paper towel, as a thick coating of oil will result in a gummy mess. 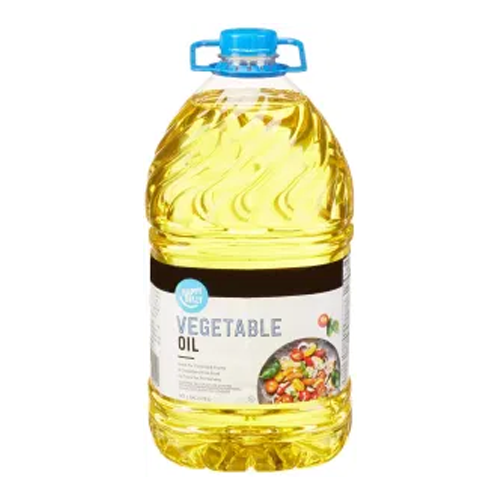 Because cast iron is such a sensitive material, you need a drying cloth that’s not going to leave anything behind. That’s why we recommend only using lint-free cleaning cloths to dry your pots and pans, like the AIDEA Microfiber Cleaning Cloths. Microfiber is a great choice as it’s soft on metal and provides a streak-free clean. If you don’t have anything lint-free to hand, you could also use paper towel. Just be sure you don’t leave any paper fibers on the cast iron. 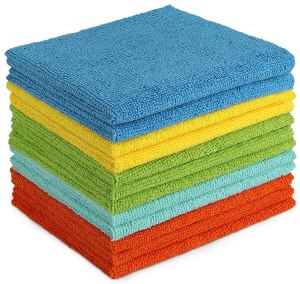 This Full Circle Cast Iron Brush has been specifically designed for use on cast iron surfaces. On the top side of the brush, you’ll find a scraper for loosening stuck-on food before attacking the pan with the brush itself. The bristles are intentionally firmer than average cleaning brushes, allowing you to clean your skillet without the use of harsh chemicals. 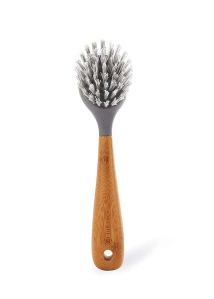 If you have food stuck on your cast iron that you can’t seem to get off, salt may be the answer. Simply pour about one cup of kosher salt into your warm pan. Then, use a kitchen towel to scour away the stuck-on bits. Finally, pour the salt into the trash can and rinse the cast iron pan with hot water. The benefit to this method is that it’s not only safe for your cast iron, but it’s also fairly cost-effective, too. 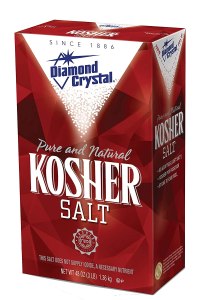 For a kit that includes just about everything you need to keep your cast iron in tip-top shape (except for oil and paper towels), consider the Patelai Store Cast Iron Cleaner Set. It comes with a chainmail scrubber, a dish brush, two scrapers, a hot handle cover, a kitchen towel and a wall hook. All of these pieces are designed to help you scrub your cast iron safely, following the steps outlined above. We love that all the pieces are included, so it takes the guesswork out of cast iron cleaning. 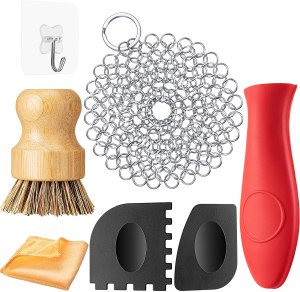 With its tough bristles and built-in scraper, the OXO Pan Brush effectively cleans cast iron pans without the need for additional cleaning products. It’s capable of cleaning all kinds of flat or ridged surfaces and also sports an ergonomically designed handle to make using the brush comfortable. In addition, the tough, topside scraper makes cleaning harder to get to grooves and corners a breeze. 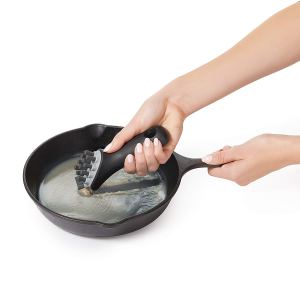 The Amagabeli Stainless Steel Cast Iron Cleaner is another sleeve that can be fitted over any of your kitchen sponges to provide an effective skillet cleaner. Simply rub over the surface of your cast iron with cleaner and hot water. The Amagabeli cleaner also doesn’t require any additional soap or harsh chemicals to work effectively. Each of the rings in the chainmail cover has been handcrafted to ensure no damaging edges meet the skillet’s surface. It’s also a great addition to your kitchen cleaning arsenal for other hard-to-clean BBQs and other cooking pans. 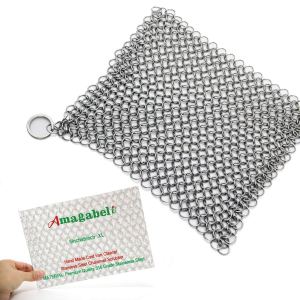 Much like your hair, cast iron also needs to be conditioned from time to time. Actually, a cast iron skillet should be re-seasoned two or three times a year, depending on how much you use it. When it’s time to do so, Knapp Made Cast Iron Seasoning and Conditioner can come in handy. Most of the time, seasoning cast iron means slathering your metal with oil, but the Knapp Made Cast Iron Seasoning and Conditioner makes the process far less messy. The mix of beeswax, canola oil and grapeseed oil goes on like butter, and once the pan is properly baked, this mix creates a lovely non-stick layer. Between seasonings, you can also use this wax-like substance to protect your cast iron after drying it. 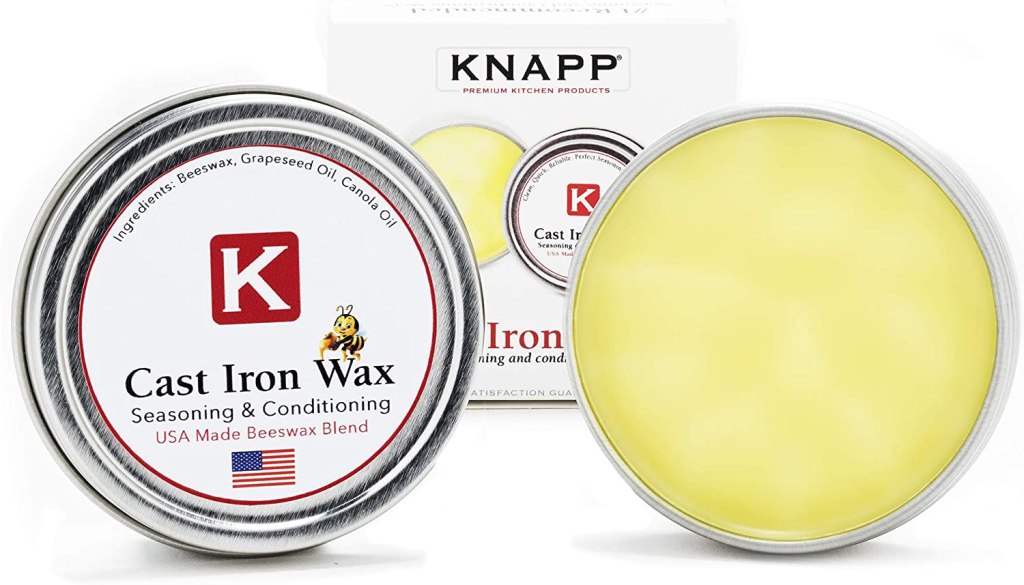 If a scrubber or cast iron brush won’t remove the food residue in your cast iron and you’re not ready to resort to salt, it’s time to break out the scraper. For stubborn, stuck-on bits, simmer a bit of water in the pan for three to five minutes. Then, after the pan has cooled, use a cast-iron safe scraper, like this Earlywood Cooking Utensil, to power through the remaining leftovers. You may already have a wooden spatula at home that would work, but this flat and slightly angled wooden utensil will make the scraping process easier. 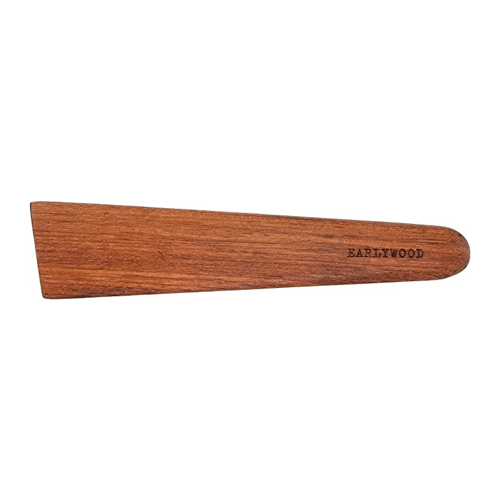 There’s a giant misconception that you can’t use soap on cast iron. Yes, using harsh soap or a lot of soap will strip the seasoning. But, you CAN use a small amount of mild soap to clean your metalware. We recommend picking baby dish soap for this purpose, but really any mild soap will do. Simply put a tiny bit of soap on a cast iron-friendly brush and scrub your pan as you would a normal dish. Just be warned that if you use too much, you will need to re-season your cast iron. 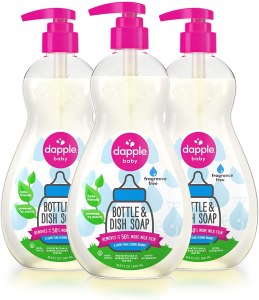 After you’ve washed and dried your cast iron, you’ll need to seal it with a small layer of oil. The best way to do this is to put a few drops of vegetable oil on a paper towel and rub it onto the cast iron. Paper towels can also be used to dry cast iron when a lint-free towel isn’t available. And, as an added bonus, Bounty is useful for all other types of kitchen jobs, from cleaning up messes to washing the windows. 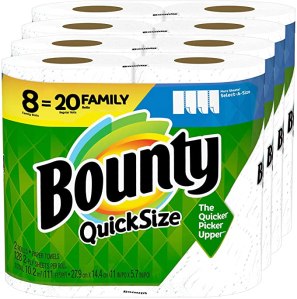 One of the keys to a happy and healthy skillet is to make sure that the seasoning, a slick and glassy coating created by baked-on oil, is present. The Caron Doucet Cast Iron Care Bundle offers an easy way to do this. In the two-bottle kit, you’ll find a specific cast iron soap, which is 100% natural and formulated to clean without damaging the seasoned cooking surface. The other bottle is a cast iron oil created from highly refined coconut oil, which when applied to the surface, protects and prolongs the life of your skillet and its natural seasoning. 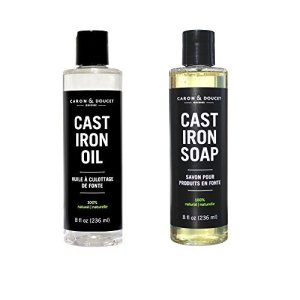 Lodge is the leading brand in cast iron right now, so it only makes sense that their care kit is one of the best. This kit includes seasoning spray made from 100% canola oil, a scrub brush with non-stick bristles, a pan scraper boasting a variety of angles and a silicone handle holder that can protect you from heat up to 500 degrees Fahrenheit. And, best of all, the kit also includes a use and care booklet, so you’ll never forget the best way to keep your cast iron in tip-top shape. 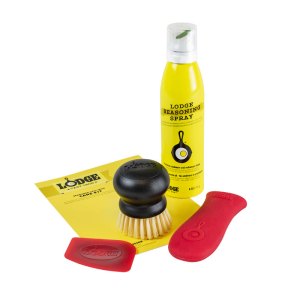 While it doesn’t require the same care as cast iron, enameled cast iron is super popular right now. Because of this, we wanted to include an item on our list that helps care for that type of cast iron as well. The Le Creuset Cast Iron Cookware Cleaner is safe to use on enamel and works to remove any discoloration in order to keep your colored cookware just as bright as the day you bought it. 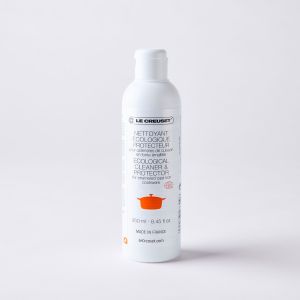 With a name like The Ringer and a claim that the machines used in its production were originally intended for police protection use, you know this North American-made cleaner is made for business. The Ringer is made from premium-grade stainless steel to ensure it remains strong throughout the cleaning process. And, by removing the need for any sponge inside the chainmail, like many products on our list, this cleaning product eliminates the bacteria build-up that often occurs on scrubbers. The Ringer is also simple to clean as it is dishwasher safe. 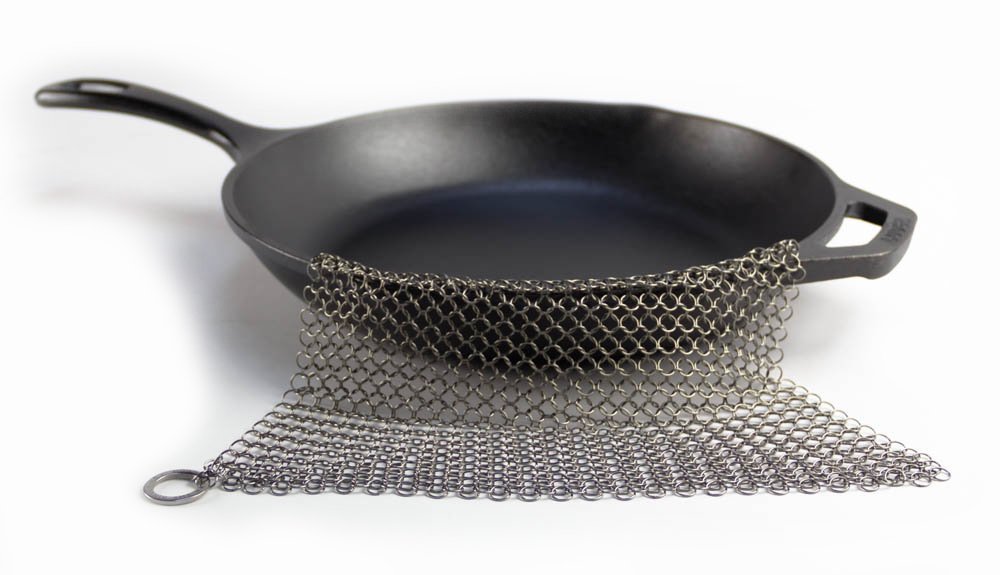