Ice trays are the devil’s work. Especially those really hard plastic, non-silicone ones that begin to crack and break over time. Like, who’s idea was that? Do you like to see people in pain? It takes 15 minutes to shell out a single ice cube and by the time it’s out, you’re not even thirsty anymore.

We’re here to say that enough is enough — revolutionize the way you’re making ice in that janky freezer of yours. Because, let’s face it, if you had an ice maker built into your freezer, you likely wouldn’t be reading this right now.

Mimapac’s silicone ice cube making bucket is the ice tray alternative that will go above and beyond what you’re currently using to make ice in the freezer. The bucket is designed to create ice by standing instead of laying down. It forms ice on the sides of the cylinder through numerous water-holding pouches, similar to your average ice tray. To keep the water in place, a second bucket is inside that presses filled water against the silicone to create the icy shape. All you have to do is stick it in the freezer and wait. You know how to make ice. 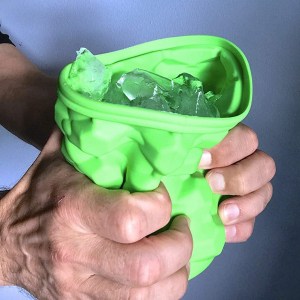 When the ice is fully formed, take the inner bucket out, squeeze the sides and there you have it — each cube created is now sitting directly inside your bucket, making the act of grabbing ice much faster and easier. Ice created doesn’t mimic any regular ice cube, but instead is formed in a slightly larger hexagonal shape — like the one’s you see from those hotel ice machines.

The bucket itself stands five and a half inches tall and can hold up to a whopping 96 ice cubes. Its small stature yet capable capacity allows for tons of space-saving in the freezer and lots of ice to fill numerous drinks. Because the structure is built the way it is, you can also use the bucket as a wine chilling bucket for outdoor dinners, or even a portable drink cooler for the backyard or patio. 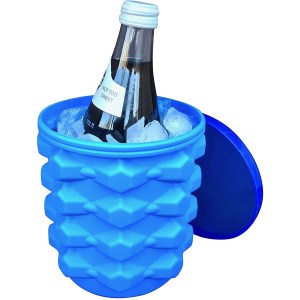 Heading camping or tailgating? The bucket acts as a small, no-fuss drink cooling option on the go as well. Just throw it in your car and you’ll have some quick ice on hand at all times. Your friends will be asking what the hell it is and why you have it but will eventually become impressed with your new find.

Given the fact that the contraption comes in two pieces, the bucket is way too easy to clean. You can throw each piece directly in the dishwasher or clean it by hand in the sink, the choice is up to you. Or, up to your kitchen, really, if you don’t have a dishwasher.

You can find the ice-making bucket yourself directly on Amazon for just under $20, which is a massive steal given what you’re getting. It comes in blue, green and pink, so there’s a color for you no matter your sipping style.