The original Instant Pot was unveiled on Amazon in 2016 to hundreds of thousands of sold units in one single day. Since then, after many iterations and impostors, it still remains the top-selling electric pressure cooker on the market.

Its popularity might have to do with its ease of use, compactness and its ability to replace nine different appliances. It also includes fifteen smart programs, allowing you to make all of your favorite dishes with just the push of a button and it’s self-sufficient – once the Instant Pot starts, there is no need to watch it, just set it and get on your way.

Instant Pot’s latest version, The Instant Pot Max, is the same pressure cooker you know and love with a few, “smart” enhancements. This revolutionary multicooker still features pressure cooking capability but has increased the psi to fifteen and added ‘NutriBoost’ technology, both of which speed up the cooking process while using up to 70% less energy. This new version also provides you with the ability to cook in the complete temperature spectrum from fermentation and sous vide to simmering and boiling and everything in between. 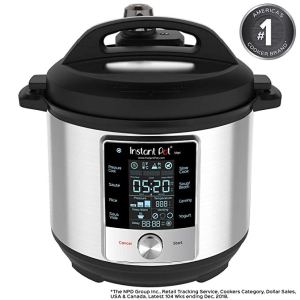 The Max has also been updated with a large touch screen intuitive interface which makes programming seamless allowing you to see real-time temperature while displaying the cooking progress of your dish. New altitude adjustments are available which eliminate the guesswork from your recipe conversion to provide a more precise cooking time and included with purchase is a free app with over 600+ recipes and more.

Other ways The Max can help make home cooking more convenient and improve the overall experience include the addition of an automated steam release to help avoid overcooking delicate food and a new brushed stainless steel exterior body, interior cook and inner pot. Three pressure levels of low, high and max let you control the time it takes to reach the target temperature and desired cook time and if you are so inclined, you can now preserve your veggies, meats, poultry and seafood with its addition of home pressure canning. Most importantly, it has been outfitted with 13 safety mechanisms which make it safer and more dependable.

The Instant Pot Max’s features are seemingly endless and it is a wonder how they fit everything into one compact machine. They do, however, and for $199.95, it seems as if they have done their job.