Alas, we finally have the answer to the question that has been ravaging our brains for centuries, and the answer, after all this time is… no one. Baby, those cookies are locked up!

If you have a Netflix account, then you’ve probably heard of The Social Dilemma by now. Half documentary, half fictional movie, this Netflix doc depicts the downside of technology and social media. To spoil a scene in the fictional half, the doc (or, moc?) presents a modern family trying to enjoy their dinner at their dining room table. The mom decides each member of the family must place their phones inside a lockable cookie jar. The scene ends with the youngest daughter sneaking away from her dinner plate and smashing the jar open with a hammer at their kitchen counter.

The cookie jar in question has been the talk of the town (or at least SPY’s Slack chat) ever since we laid our eyes upon it. Is it real? Does it work? Can I buy one? The short answer to all of those questions is yes.

If you want to lock up your teen’s tech, or save yourself from constant doom scrolling, then this is the cookie jar from The Social Dilemma that you’re looking for: 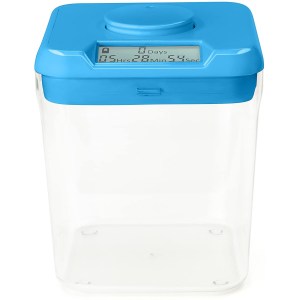 What Is the Kitchen Safe?

The Kitchen Safe made its debut on Shark Tank in 2014 and actually ended up scoring a $100,000 deal with Nick Woodman, the CEO of GoPro who starred as a guest investor on the episode. Since then, the device has been a real hit with online retailers across the internet. It’s now skyrocketing again in popularity from that one, epic scene in the documentary.

It works like this: throw whatever you want to lock away inside the Kitchen Safe, set the timer and nobody will have access to the contents until the time is up. There’s not even an emergency option to reverse your choice, you simply have to wait — or, pull the move the little girl from The Social Dilemma did. We just don’t recommend it. 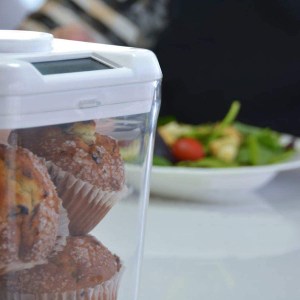 This jar reportedly uses methodology backed by MIT, Princeton, Harvard, Stanford and Yale research. The idea is to kick bad snacking behavior and test your willpower, building better habits in the process. Whether you’re trying to kick your kids’ sneaky cookie stealing antics, hiding the remote from your couch potato partner or keeping each family member’s phone in a no-go spot while you sit together for family dinner, this locking cookie jar forces you to forgo your bad habits.

The jar comes in a few colors, including blue, green, red and white. It’s completely clear, which makes waiting even harder, but trust us, even if you can see the contents, you will not be able to get in here if it’s locked — so don’t even try.

You can buy one of these now on Amazon for just under $60. While that might seem like a lot for a cookie jar in the eyes of some, it has the power to change your life in the way no other jar option can. Just test it out and see for yourself.