If you’re a bacon lover, then you know there is no better smell to wake up to in the morning than a sizzling hot plate filled with crispy bacon. You likely also know that cooking bacon is a giant pain. It’s messy, it’s greasy, it’s hot and it often leaves the smell of bacon lingering in your kitchen and possibly throughout your home for hours if not days. But there is a way to get the delicious taste of bacon without all the fuss. Enter, the microwavable bacon tray.

The best microwavable bacon tray does exactly what its name suggests. Bacon is placed on the tray and put in the microwave for a few minutes, emerging crispy, delicious and ready to eat. Not only is this a great way to save time, but it also saves heating up your kitchen by turning on the oven, cutting down on grease splatter from preparing bacon in a frying pan and lessening the smell of bacon throughout the home. We also like that the trays are designed to help collect fat from the bacon, making it a healthier treat.

Whether you’re short on time, short on a stove or simply want an easy way to prepare bacon quickly, we recommend using a microwavable bacon tray.

You will be making bacon in no time with the Makin Bacon Microwave Bacon Tray. One of the original microwavable bacon trays, Makin Bacon works by lifting the bacon off the tray for a full 360-degree cooking experience. The tray and bacon holder are made in the USA with specially formulated high heat plastic. The tray catches the fat to help reduce splatter and cooking time is only one minute per strip. Cleanup is easy thanks to the trays’ dishwasher safe design.

Pros: Thanks to Makin Bacon’s elevated design, bacon cooks above the fat, not in it. This reduces fat by up to 35%.

Cons: Makin Bacon does not come with a lid and the company suggests that users place a paper towel over the bacon to help contain the splatter. Because of its height, Makin Bacon may not be appropriate for smaller microwaves. 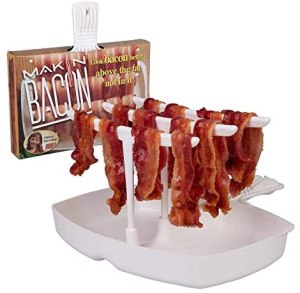 Cook bacon quickly and with little cleanup using the Prep Solutions by Progressive Microwavable Bacon Grill. With enough room to cook four to six bacon strips at once, the Prep Solutions tray is designed to slightly elevate the bacon to allow the grease to collect in the bottom of the tray, providing a healthier cooking method. A vented lid helps to stop splatter from spreading and a recessed handle provides a convenient way to lift the lid. We also like that the BPA-free tray and lid are both dishwasher safe.

Pros: In addition to bacon, the Prep Solutions tray can be used to warm up and cook pizza, sausage, patties, taquitos and other foods that are safe for the microwave.

Cons: The Prep Solutions tray requires a minimum turntable diameter of 12.5 inches inside the microwave. 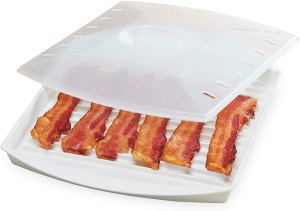 Store and cook bacon using the Sistema Microwave Easy Bacon. The tray’s grooved base allows excess fat to collect underneath the bacon rather than having the bacon cook directly in it, providing a healthier end result. The secure lid makes for splatter-free cooking and cleaning is easy thanks to the lid and tray’s dishwasher safe design. The Sistema is the only tray on our list that is safe for use in the freezer.

Pros: The Sistema features a built-in spout on the side of the tray, providing a convenient and mess-free way of pouring bacon fat into a separate container.

Cons: The Sistema only holds a small amount of bacon at one time.

If you have a small microwave that won’t fit most microwavable bacon trays, we have your solution. The WowBacon Microwave Cooker is shaped like a large travel mug and can cook six strips of bacon at once. Keeping the bacon and all the grease the comes with it completely contained while cooking, the WowBacon is one of the cleanest options for cooking bacon in the microwave. The bacon is suspended on small hooks while cooking, allowing the grease to collect at the bottom of the cup. A large handle makes it easy to remove the WowBacon from the microwave and lift the bacon out once the lid is unlocked. The WowBacon can be used to cook pork, turkey, chicken and beef bacon as well as Ramen noodles, scrambled eggs, poached eggs and macaroni and cheese.

Pros: The WowBacon is dishwasher safe, BPA-free and uses FSC-certified or biodegradable packaging.

Cons: The WowBacon does not have the same life span as other models on our list. 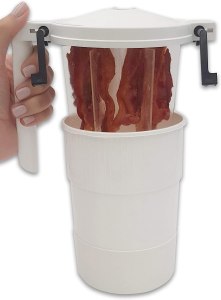