* Each set of die are housed in a recycled wine bottle-turned-tumbler
* Drink combinations exceed 1.5 million combinations
* Each birchwood die is laser engraved in the U.S.

For your next cocktail party or gift-giving soiree, consider picking up the Mixology Dice Tumbler set from Foodie Dice. Or keep them for yourself and learn how to make cocktails like a pro.

The set includes eight die made from birchwood that have been laser engraved in the U.S. and comes packaged in a reclaimed wine bottle that’s been cut down and polished into a handy tumbler. Each die is engraved with one of eight different ingredients and breaks down as such: spirit, sugar, liqueur, citrus, fruit, herb, spice and bitters. 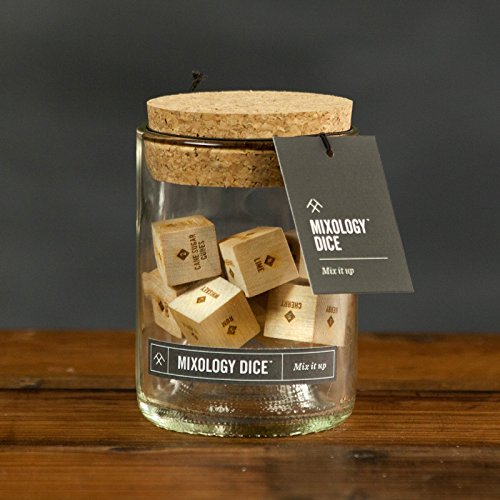 According to Foodie Dice, there are over 1.5 million potential combinations for drinks. That’s not to say there are that many cocktails in existence. While each die represents one of eight ingredients, each side of the die calls for a different variant. For instance, the spirit die calls for rum, tequila, gin, vodka, whiskey and brandy. Each of the other die are broken down in the same fashion.

While the origins of the cocktail – both the word and drink – are somewhat murky, a traditional cocktail is believed to be a mixture of spirits, sugar, water and bitters. But don’t worry, you’re not just throwing all the dice at once and cobbling together whatever is facing up. The Mixology Dice Tumbler includes instructions on which dice to throw together, as well as ingredient ratios and mixing directions. Who knew learning could be so much fun?