The three golden rules of food composting are pretty straightforward: keep food waste out of landfills, reduce methane levels in the atmosphere, and create rich compost to improve your garden soil. Who could argue with any of that? So, we dove in and bought a big composting barrel to keep in the backyard.

That barrel sat there for a few years and we diligently put in all of our food waste. What did we create? A gigantic, smelly trailer park for mosquitos and bees. The landfill we were trying to avoid now contains one large barrel composter.

Still, the idea of converting our food waste to loam for the garden was really appealing, so when the Lomi electric composter appeared on the market, we decided to give home composting another try.

What is the Lomi? It’s an electric composter by a company called Pela. Electric composters like Lomi speed up the breakdown of food waste using heat, abrasion and oxygen. Lomi’s promise: minimize your food waste by converting it to loam indoors, at the touch of a button and without any nasty smells or pests. Basically, a revolutionary new way to be sustainable at home.

Pela sent SPY.com a Lomi for testing, and we’ve spent several weeks testing its promises. Does it live up to its own hype? Find out in our full Lomi review below, and head to Pela to reserve your spot in line, as this electric composter has a tendency to sell out. 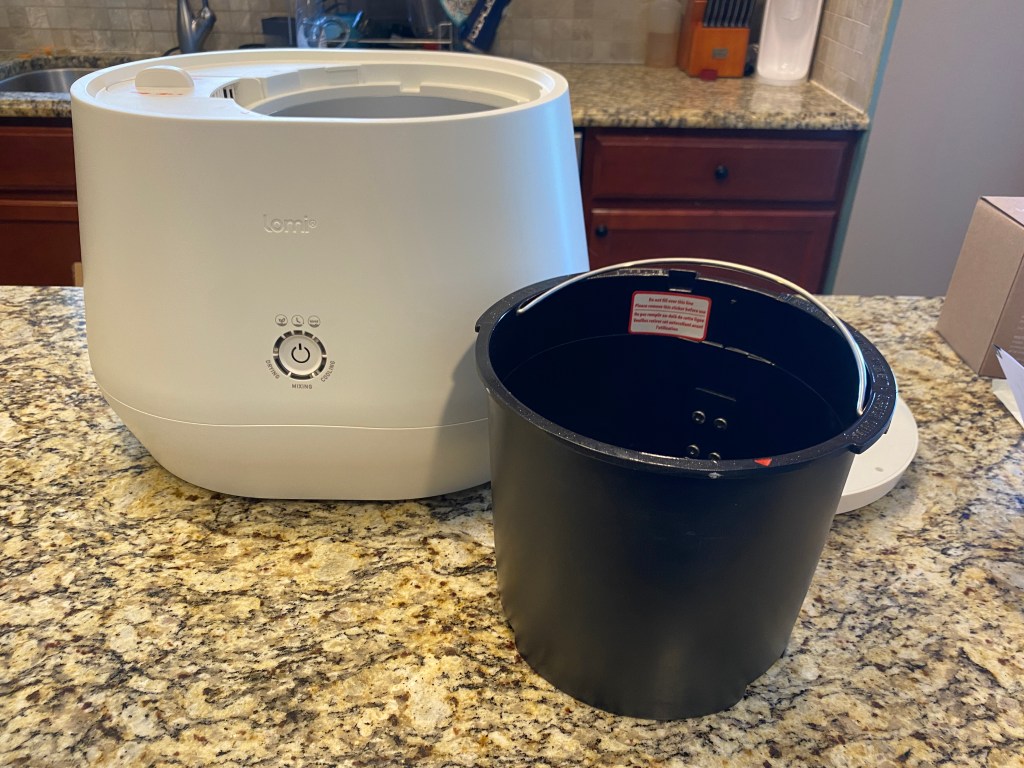 What’s In The Box?

The Lomi unit is roughly the size of a bread machine, with a removable bucket for composting. It’s sleek and attractive, and if you have the counter space it looks good in a kitchen, although you cannot back it against a wall or into a corner because it expels a significant amount of hot (odorless) air through the back vents.

The bag the Lomi arrives in asks you to compost it — more on that later. It also comes with two refillable filtration containers and two bags of activated charcoal, a packet of Lomi Pods to be used during the composting process, a power cord, and a short set of easy instructions. 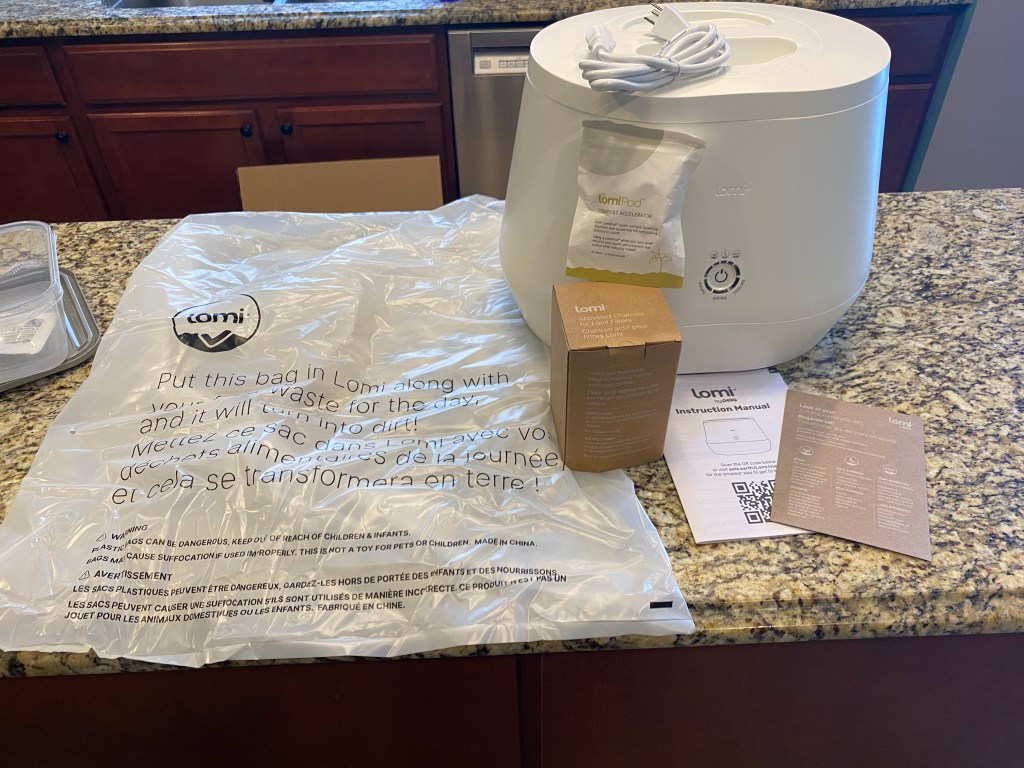 How Does the Lomi Work?

The Lomi works like nature to break down waste and convert it into soil by using heat, abrasion and oxygen. It just uses all three in far greater intensity than what naturally occurs in an outdoor compost bin, so the entire process takes hours instead of weeks. The grinder inside the removable Lomi bucket provides the abrasion to break down the waste into smaller fragments, and the unit itself generates heat. Even with all that activity, however, the Lomi uses just 0.6 to 1 kWh of electricity per cycle.

The Lomi has three modes — Grow, Eco-Express and Lomi Approved — and you can scroll between the three by holding down the main button. The front lights show where the Lomi is in the process, either drying, mixing or cooling.

We found the controls to be simple and intuitive, and we didn’t have any trouble getting it up and running. 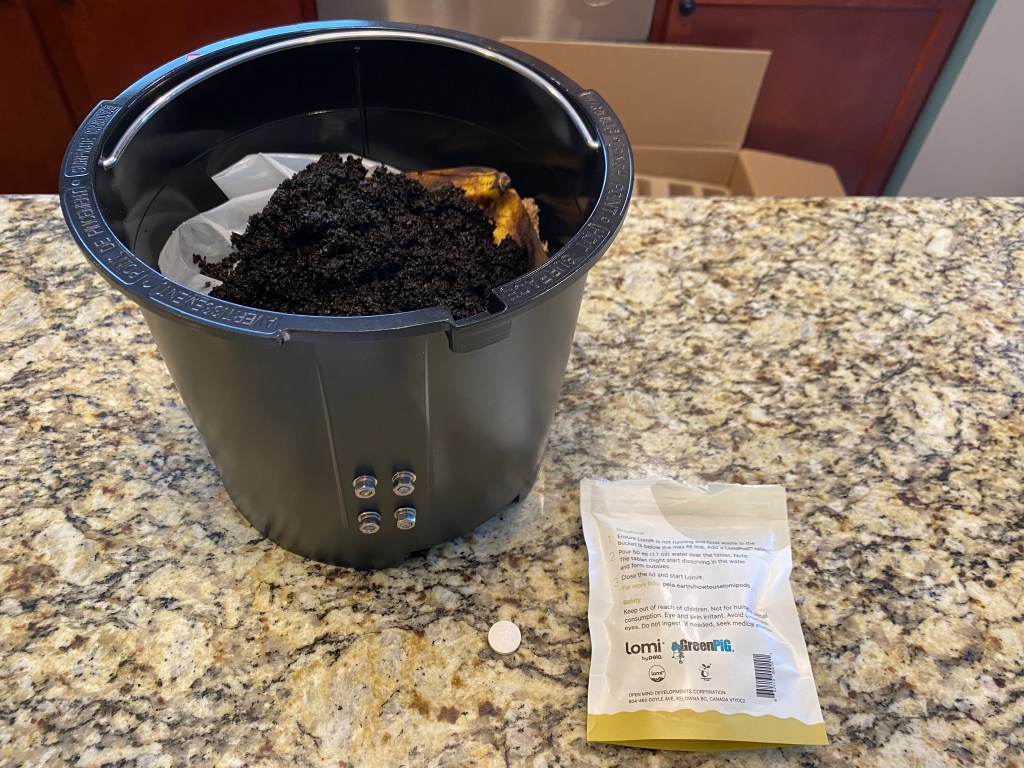 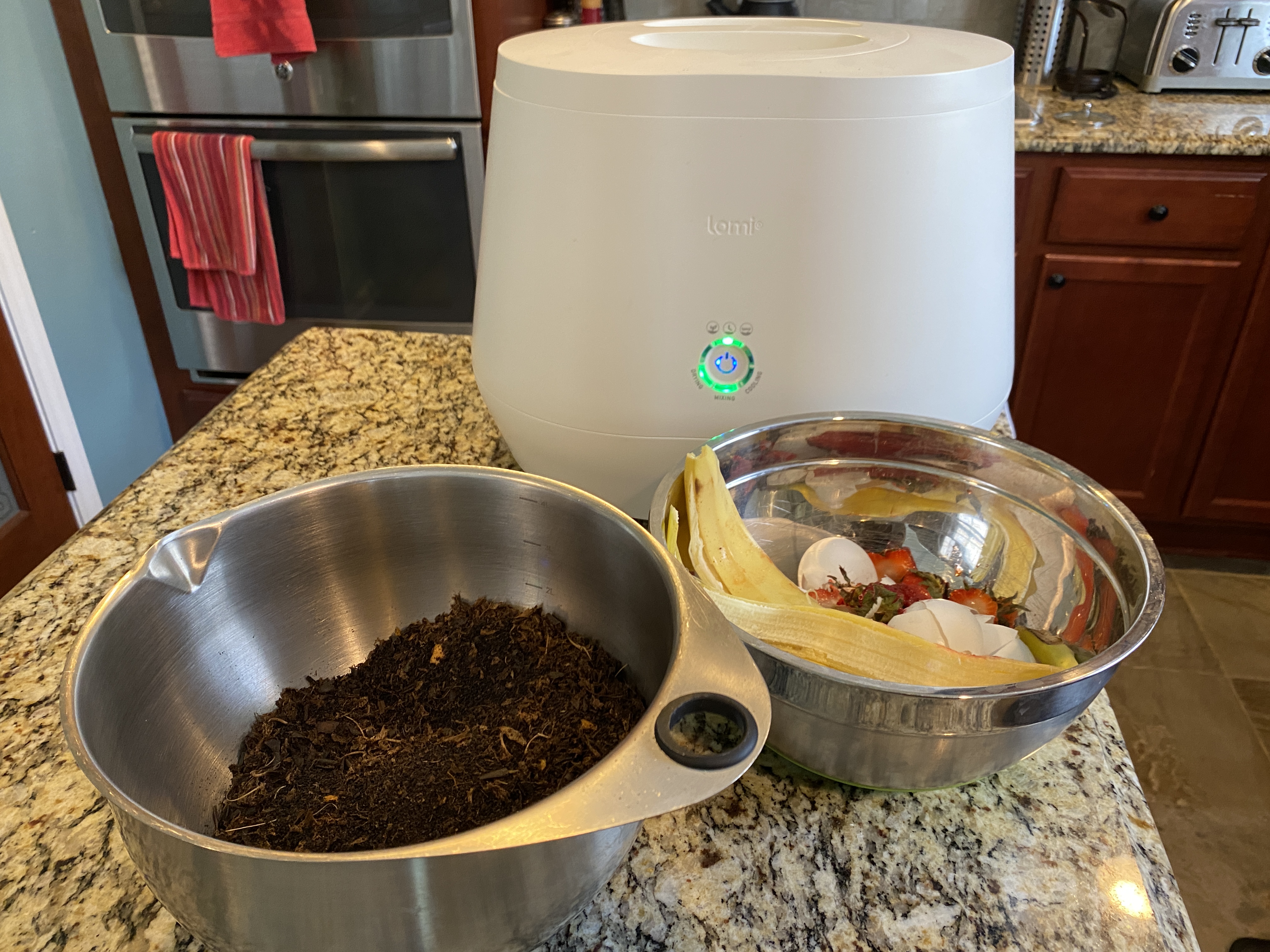 Per its instruction book, the Lomi can tackle any food waste imaginable with the exception of hard bones (chicken, beef, pork, lamb and fish bones are all fine) and large fruit pits (avocados, peaches, apricots, mangos and nectarines). Also compostable: houseplant trimmings, starchy foods, nuts and dairy products. It claims to even compost Lomi-approved bioplastic products and packaging, and even the bag the Lomi arrived in.

The bag? That sounded like a dare. So after unboxing, reading the easy instructions, and filling the charcoal filters, we came up with a batch of banana peels and coffee grounds to go with the bag. Per the instructions, we added a Lomi Pod — a dissolving probiotic additive that speeds the composting process and creates a richer soil product — and a little bit of water. From there, we chose the default Eco-Express mode, pushed the button, and waited. 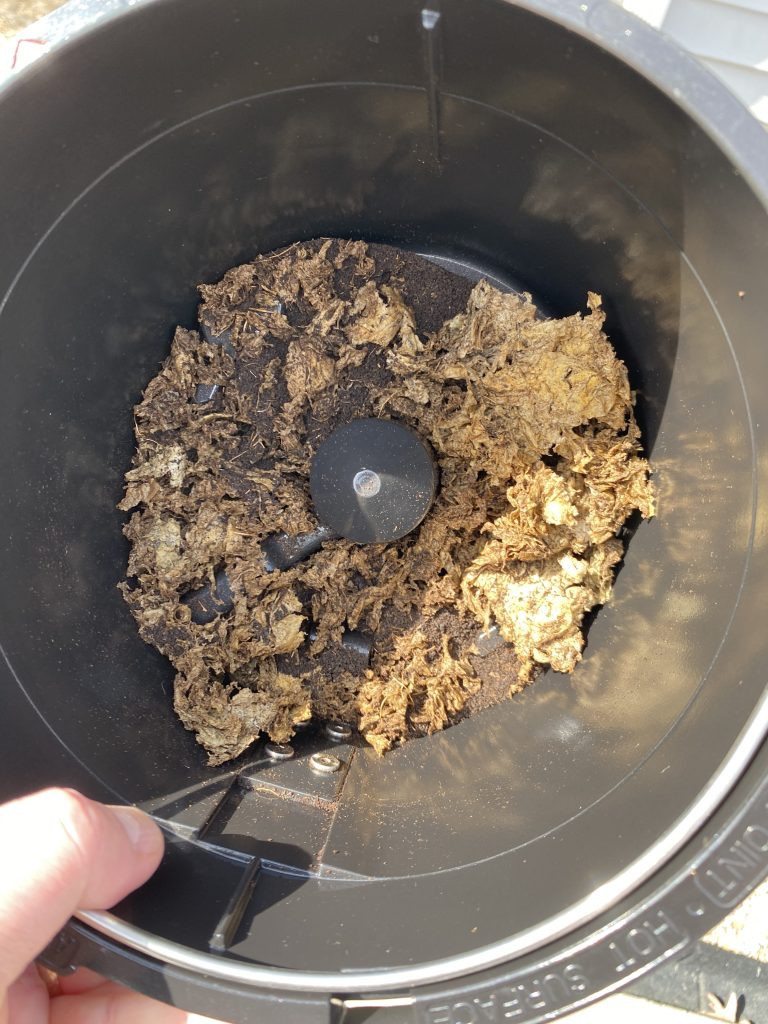 The Lomi is surprisingly quiet — not silent, but quiet. It does emit the occasional sound you might want to blame on the dog, which is actually pretty funny. But it ran very unobtrusively in the background, with zero smell and only the occasional amusing eructation. The Eco-Express cycle took roughly 4 hours to complete, and it announced it was over with a beep.

The shocking result was just how much it reduced the contents. The bag fared the worst in terms of breakdown, leaving behind large shards, but there was virtually no evidence there were ever two banana peels in here. We emptied the bucket and set up the next round, sans compostable bag.

We tested the Lomi in a house of seven people, so generating more food waste for a second go was hardly an effort. The second batch, without the bag, was far more representative of our daily output of food waste: fruit cores, eggshells, coffee grounds and some vile “what meat is this?” leftovers from the deep recesses of the refrigerator. Denser, smellier stuff for a more accurate test.

We filled Lomi to its recommended max capacity, marked by a line in the bucket, and ran this batch overnight at the Grow Mode, which runs for 16-20 hours and produces fully matured compost that can be immediately incorporated into the soil. (Lomi’s recommended ratio of loam to soil is 1 part to 10, so don’t consider planting anything in just Lomi soil.) 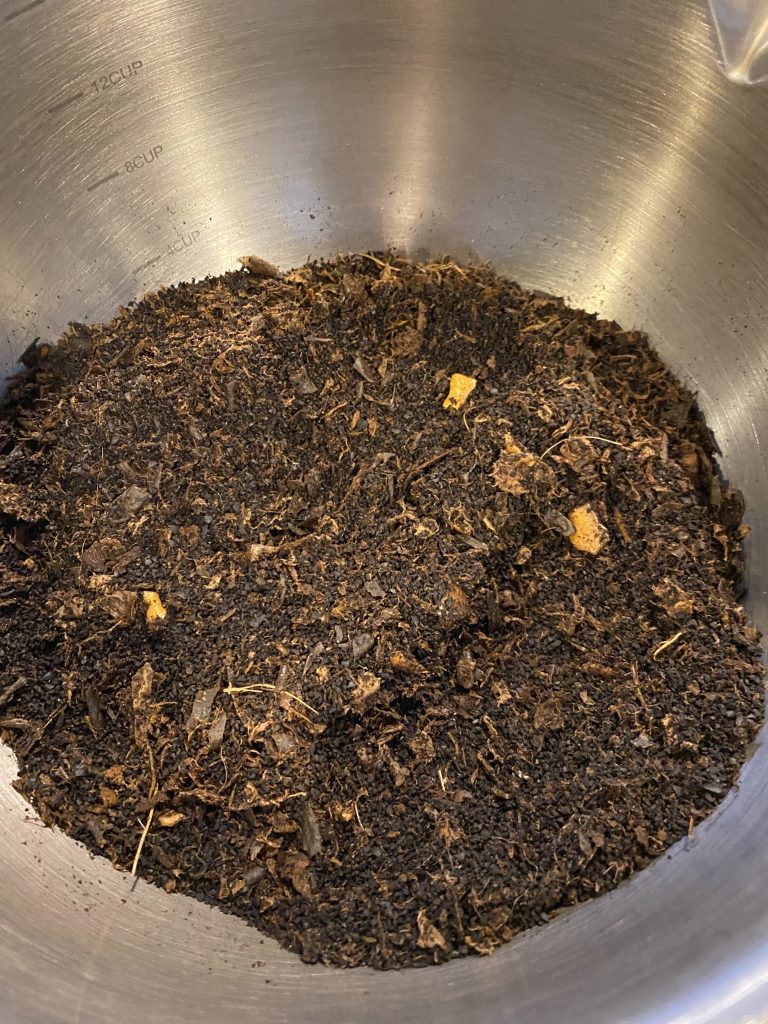 This was more like it — a large quantity of foodstuffs and waste of varying levels of grossness was broken down with amazing thoroughness, leaving behind a dry yet rich, virtually odorless compost. This was the moment we were totally sold on the Lomi.

Lomi Review: For a Large Household, It’s Worth Every Penny

We made feeding the Lomi a regular routine for weeks, running it twice per day. On the rare occasion when we did not have enough waste to run a batch, we left the partially filled bucket sealed in the Lomi, and there was not a hint of food smell escaping it. Lomi says it can store items smell-free for a couple of days, although we were using it so often we never put that to the full test.

The output from the Lomi has been used in indoor houseplants and in the outdoor garden and grow boxes. The indoor plants have thrived, and there’s been no smell nor attracting of gnats or bugs that you would often associate with compost.

We have to get truly nitpicky to find things about Lomi that we don’t love. The lid itself isn’t particularly easy to close, since you have to line up the grooves just right before you twist it closed. And we tried moving the unit to a small laundry room to run, but it generated so much heat as to render that room almost muggy. In the kitchen, however, no such issues at all. 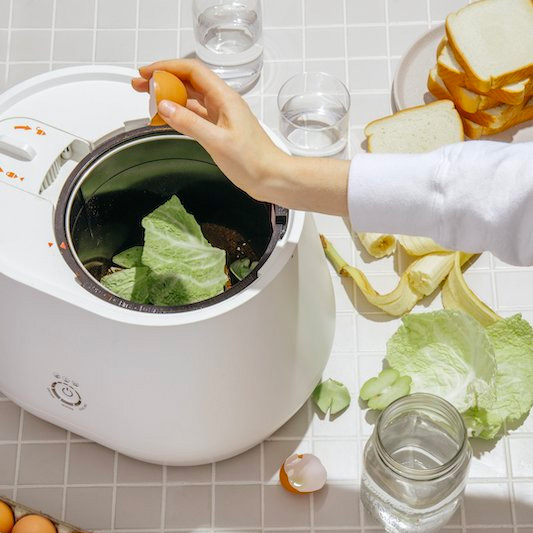 What do we love about the Lomi? Everything else. With seven people who rarely order out in the house, we generate a tremendous amount of food waste. The Lomi has been working overtime to break it down and has done so thoroughly and easily, helping us vastly reduce our waste as promised. The veggie garden is also likely to thank us for all of the natural compost additions.

The Lomi has been selling like mad since its January release — currently, they are fulfilling their June shipments, but those are over 90% sold out already. They are currently taking $49 deposits, with the remaining $450 due upon shipment. The Lomi Home Composter comes with a 3-year extended warranty and also offers a two-year subscription to ship more Lomi Pods and filters for $39 every three months.