Leftovers are a great way to extend a delicious meal and provide an easy and fast lunch or dinner for the rest of the week. But some foods can leave refrigerators with unpleasant odors that make opening the doors feel like venturing into an unknown forest filled with dangerous creatures. That’s why we like using a refrigerator deodorizer that neutralizes odors and keeps food looking and tasting fresher longer.

What To Look For In A Refrigerator Deodorize

Refrigerator deodorizers help to reduce bacteria growth and therefore reduce smells and extend the life of food. Adding more toxins to your fridge will only create an additional growth area, so opt for deodorizers made of non-toxic ingredients.

Look at the lifespan of your deodorizer. If you’re someone who is good at remembering when it’s time to change out your deodorizer, one with a shorter lifespan could work for you. If you’re often away from home for extended periods or need something for your rental property, choose a deodorizer that doesn’t need to be frequently changed.

Keep size in mind. Real estate is at a premium in refrigerators, so opt for a deodorizer that won’t take up much room.

How We Chose the Best Refrigerator Deodorizer

The most common refrigerator deodorizer is an open box of baking soda, but there are many products that work even harder to remove unpleasant smells and extend the lifespan of food. A refrigerator deodorizer that is designed specifically to remove smells typically lasts longer than baking soda and is more powerful at absorbing odors. As a major added benefit, many of these deodorizers help to extend the life of food, especially produce, which helps users save money that would otherwise be wasted on uneaten rotted fruit and vegetables. We included options that were reusable, as well as those that could be disposed of after a month.

If you’re tired of looking for a midnight snack and being greeted with the smell of spoiled food, it’s time to use one of the best refrigerator deodorizers.

For a compact and leakproof refrigerator deodorizer that is food-safe and fragrance-free, we recommend NonScents Refrigerator Deodorizer. Made with a patented formula, the deodorizer lasts up to six months. The ingredients used to make NonScents are non-toxic and we like that the packaging is biodegradable. NonScents can help to keep fruit and vegetables fresher in the refrigerator up to two to four times longer than without it.

Pros: NonScents is not only designed to neutralize odors in the refrigerator but it can also be used in freezers as well.

Cons: NonScents is advertised to begin working instantly but in some cases, it can take a few weeks for the effects to be noticed. 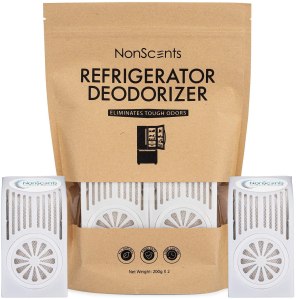 For a traditional approach to neutralizing smells, try the Arm & Hammer Fridge Fresh Refrigerator Air Filter. The pack of four filters can be placed almost anywhere inside a fridge to help reduce unpleasant odors. Unlike a traditional box of baking soda, the filters won’t take up valuable fridge space thanks to a suction grip backing that enables users to place the filters on the side or roof of the fridge. Not only do the filters help remove odors, but they also keep food fresh longer.

Pros: A replacement indicator takes the guesswork out of knowing when it’s time to replace the filter.

Cons: Filters must be discarded and replaced every 30 days. 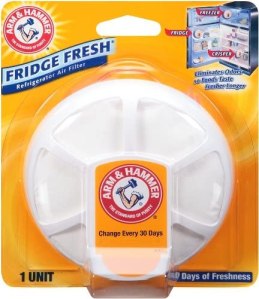 For a natural and reusable deodorizer that helps eliminate unpleasant odors quickly, we recommend the Moso Natural Air Purifying Bag. Free from fragrances and chemicals, the charcoal-based deodorizer helps pull in unpleasant odors and eliminate the smell. Excess moisture is absorbed to help decrease the chance of bacteria, mold or mildew build-up. Ethylene gas, which causes produce to age prematurely, is also absorbed by the bag and extends the life of fruit and vegetables. Each bag can be reused for up to two years. The Moso comes with a suction cup hook and has a key ring built into it that enables users to easily hang the bag anywhere in their fridge to avoid taking up space on shelves.

Pros: The bags are made from natural bamboo and placing the bag in direct sunlight for one hour each month recharges it and makes it ready to place in the refrigerator once again.

Cons: The suction cup included with the bag may not be strong enough to be used daily. 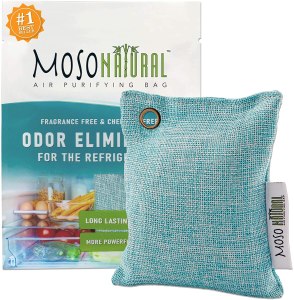