The debate over the best ice-based dessert isn’t going away any time soon, and rightly so. From popsicles to gelato, awarding the number one spot actually feels more redundant than useful, as we think it’s preferable to enjoy all of them rather than having to pick one over the others. However, when it comes to the most significant dessert in American history, it’s hard to look beyond the snow cone. With a history tracing back to the 1850s, these simple yet well-loved treats are synonymous with vintage America and remain loved, even today. That’s why investing in one of the best snow cone machines is a decision you’re not likely to regret.

What Is a Snow Cone?

A snow cone is not a complicated dessert. While the fineness of the ice may be a matter of debate among some, a snow cone is basically made up of ice and a flavored, syrup topping, all presented in a disposable paper cone. As to how many flavors and how much of those flavors you add to your creation, well, that’s down to your personal preference. Essentially, a snow cone is a dose of flavored ice. It’s this simplicity that makes it such an appealing treat on warm summer days. Popular flavors include:

We’ve put together a list of the nine best snow cone machines on Amazon. Each device is impressively reviewed, and through the press of a button or twist of a mechanism, each one offers you the chance to enjoy freshly prepared snow cones in the comfort of your own home. Read on to find the right one for you.

While the claim of being “the fastest in-home ice shaver in the world” may sound over the top, it’s hard to argue that Little Snowie Max Snow Cone Machine doesn’t back it up with facts. From the five-star rating from over 90% of Amazon users to the ability to create deliciously fluffy snow in three seconds, it’s easy to feel confident that you and everyone else are going to feel happy with your purchase. The advanced, patented design uses a professional grade, high-speed motor and stainless-steel blades to transform your ice cubes. It’s an ideal addition to any home, office, holiday party, birthday party or barbecue and comes supplied with powder sticks, mixing bottles and eight Snowie reusable snow cone shovel spoons. 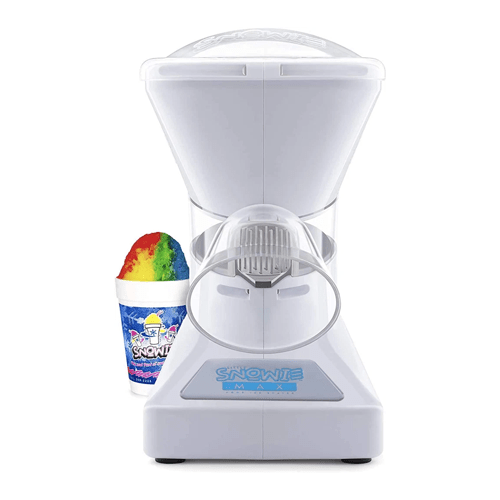 At under $35, and usually on sale, the MANBA Ice Shaver and Snow Cone Machine is the budget-friendly answer to creating snow cones. While it may require a little more elbow grease to function than other options on our list, that doesn’t mean your end product is any less authentic. The twisting mechanism uses three stainless steel blades to cut through ice cubes and create snow cone-worthy ice. Handily, the set includes an ice cube tray, so you’ve got everything you need from the very beginning. 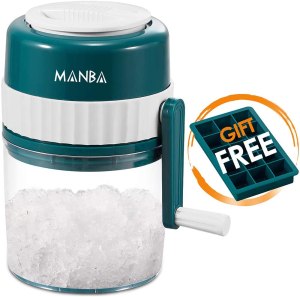 If you really don’t want to deal with your ice manually, the best budget option is the Hawaiian Shaved Ice S900A Snow Cone Machine. It sports a simple and user-friendly design that delivers shaved ice in a matter of minutes. Included in the kit you’ll also find two block ice molds for creating your ice stock and a non-slip mat. Once you have an ice block ready, it’s as simple as placing it into the top of the machine, holding the button down as the machine shaves it away and then enjoying it! In addition to snow cones, the versatile product can also be used for slushies, margaritas, snowballs and other shaved ice-based delights. 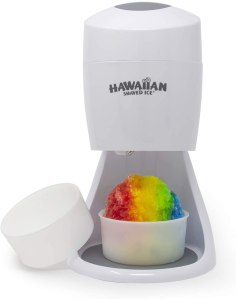 The Nostalgia SCM525BL Vintage Countertop Snow Cone Maker takes snow cone creation to the next level by boasting a capacity capable of producing up to eight 20-ounce snow cones at one time. Inside the roof-mounted mechanism are several stainless steel blades which effortlessly turn your ice into delicious snow. Even better, because of the maker’s transparent sides, all potential customers get to watch the snow as it falls. Additionally, the maker, which is available in either blue or white, is supplied with two reusable cones, an ice scoop and a two-cone storage shelf. 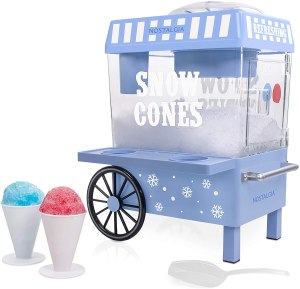 Sporting the classic snow cone maker look, the Nostalgia RSM602 Countertop Snow Cone Maker is a stylish and convenient way to enjoy snow cones at home or at the office. The user-friendly device is ideal for all kinds of occasions, whether that’s a birthday party or any get-together, and creates as much ready-to-eat snow as you have ice fuel to feed in. It comes supplied with a scoop and two reusable cones. Plus, you’ll also have the option of choosing the maker plus party kit option, which includes syrups, straws and additional cones. 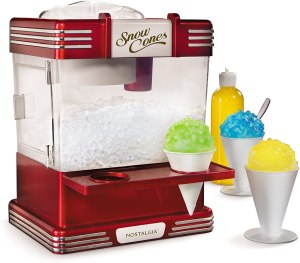 If you’re looking for a quick and easy answer which has everything you need for creating a moderate amount of snow cones right off the bat, the Hawaiian Shaved Ice S900A Shaved Ice and Snow Cone Machine Set is a good bet. In addition to the impressively reviewed snow cone machine, you’ll find snow cone cups, spoon straws, black bottle pourers and round block ice molds. In addition, you’ll also get three own-brand Hawaiian Shaved Ice syrup packs in the form of cherry, grape and blue raspberry. 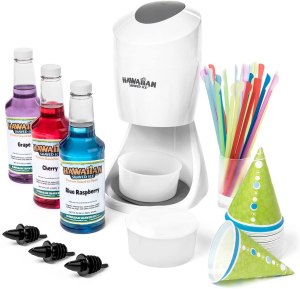 The VIVOHOME Electric Ice Shaver Snow Cone Maker sets aside bright colors and romance to deliver a device that is built for function. While still sporting an attractive stainless steel finish, the maker’s real beauty comes through in its shaved ice production efficiency. Simply load your solid ice into the ice barrel, switch it on, press the handle down and watch as crushed ice feeds into the stainless steel collection bowl, ready for use. No matter whether you’re creating a snow cone or a margarita, the party only needs to stop when you run out of ready-to-crush ice. 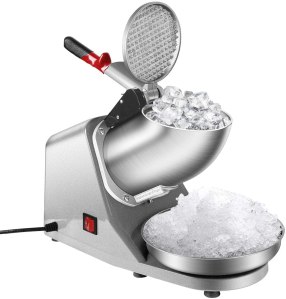 If you love Cuisinart’s pots, pans and other kitchenware, you’ll likely love their Cuisinart Snow Cone Maker, too. This compact, countertop device sports a user-friendly, top-loading mechanism that switches on and off as you press the handle against the ice inside. When crushed, the ice falls into the pull-out draw beneath, ready for distribution into one of the 12 disposable or four BPA-free reusable cones which are supplied with the maker. Handily, the smart design includes two fold-down shelves which can be used to store your snow cones after they’re made. 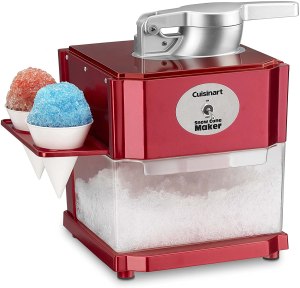 If you’re really looking to up your snow cone production, it may be time to invest in the Nostalgia 48-Inch Tall Snow Cone Cart. This sizable machine sits 48 inches high and boasts a capacity large enough for about 72 eight-ounce snow cones, making it a great choice for large parties or get-togethers. Aesthetically, the cart also ticks all the boxes, with bright blue and gold details alongside 13-inch, rubber-tired wheels and attractive decals. Furthermore, the design includes a handy space under the ice chamber for storing your snow cone essentials, which can be bought with the cart or purchased separately. 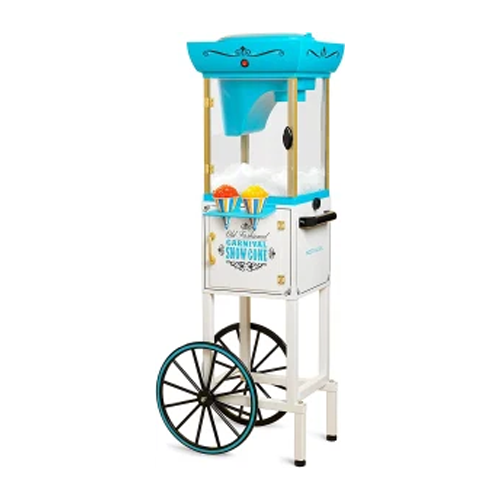