The unsung hero of any kitchen is the convection oven (a.k.a the toaster oven). Microwaves often turn reheated foods like fries into a soggy, not so appetizing second helping, and by the type your oven range heats up, you’ll have already decided to just eat your food cold. The convection oven acts as the perfect middle ground. You can easily cook snacks or full-blown dinners in this convenient countertop appliance, and do it much quicker than your average oven range.

Convection ovens are so versatile that they can replace the use for other kitchen appliances like toasters or air fryers, and let you reclaim that valuable countertop real estate with a single appliance that can do it all. Convection ovens are even more energy-efficient than your standard range, so you’re not only adding versatility inside the kitchen but also shaving a little money off that energy bill, too.

Once you experience the convenience of a toaster oven, you’ll wonder how you went as long as you did without one. This underrated kitchen appliance is a must-have for any household.

Below are our recommendations for the best convection ovens available.

This medium-sized convection oven is a jack of all trades. With settings for toast, bagels, pizza, cookies, keeping food warm, baking or broiling, you might as well sell your full-sized range. (We’re only half-joking). It’s big enough to fit up to six slices of bread, or a 13-inch pizza inside, but only takes up about 18 inches of counter space. The digital display and knobs make operation a piece of cake. With 4.6 stars on Amazon and over 6,000 ratings, this convection oven has been vetted and approved by home chefs everywhere. 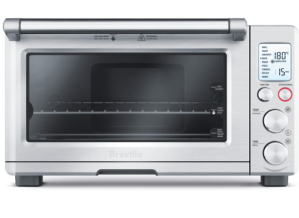 With 4.6 stars and over 1,500 ratings on Amazon, this convection oven is a fan favorite. It is big enough to fit a 13-inch pizza, or a 9 x 13-inch baking sheet for those holiday cookies that impress the whole family. A large backlit blue display makes selecting cooking functions easy. It’s a little bit longer than the Breville, and also about $15 dollars more expensive, but it is an equally fantastic convection oven. 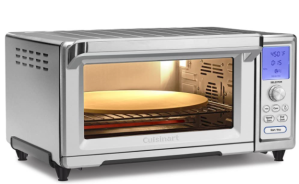 If you’re looking for a less flashy, more compact convection oven, the Panasonic FlashXpress fits the bill. With six cooking programs, you can make most college favorites like toast, pizza, frozen waffles, and reheat food quickly with the press of a button. The temperature control isn’t as precise as our top options, and the lack of a true digital display gives this oven a little more of an older look and feel, but you’ll save $100 or so forgoing a few bells and whistles. 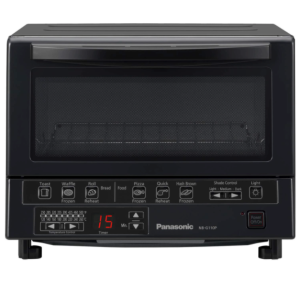 If you really want to save some coin on a reliable convection oven that has 4.4 stars on Amazon and almost 3,500 ratings, this Black and Decker is the way to go. Its operation is pretty basic — there’s a temperature knob, and a function knob to choose between four settings and a timer/toast knob. Even though the operation is basic, you can still fit up to four pieces of toast and a 9-inch pizza inside. You can save a lot of coin going back to the basics. 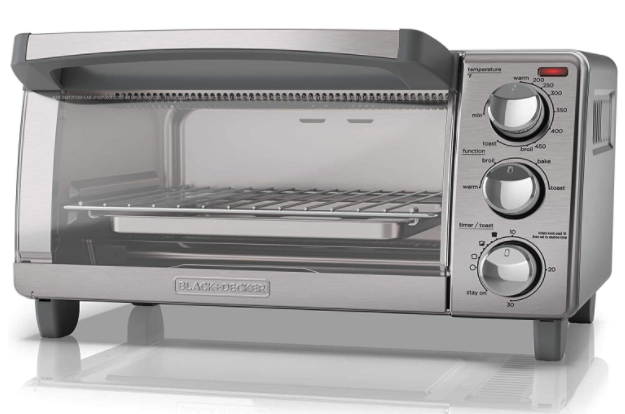 The layout and digital features make this convection oven look more like a microwave, but can your microwave bake an entire chicken or two store-bought pizzas at once? With digital settings for toasting, broiling, defrosting and baking, you can make a variety of food in this countertop oven. Also, the auto-shutoff is a nice little safety feature for those forgetful few. It’s an overall solid choice for around $100. 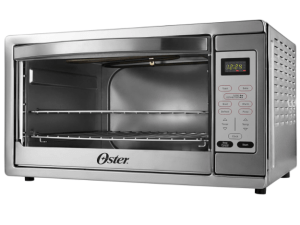 This all-black convection oven is about as simple to operate as it gets. Use the knob to choose between nine functions, and then use the other knob to dial in the temperature which appears on a digital display. Pretty easy, right? It comes with a 9 x 13-inch baking pan, grill rack and removable drip and crumb tray. Sure, it’s not flashy, but it certainly gets the job done for most people. 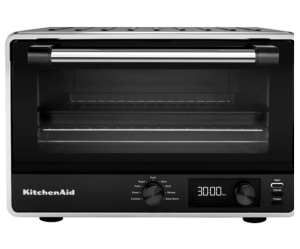 It might not necessarily look like a convection oven, but the unique design does come with its share of perks. For starters, beyond roasting, grilling and baking, this is one of the only convection around that has a steam option (and the only one in our lineup). And as a safety feature, if the lid isn’t attached properly, or when it is removed, the oven will automatically turn off. The lid has two dials: a timer and a temperature knob. Above the dials is a quick guide for how long and how hot to cook various foods. This is a nifty little oven option and an affordable one to boot. 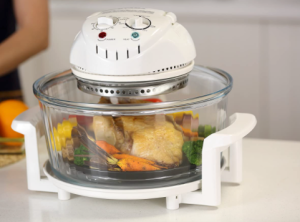 There’s a lot of reasons to like the Ninja Foodie. For starters, beyond toasting and baking, you can also air-fry food. If you’ve never made food like wings or reheated food by air frying, you’re missing out. The other nice feature is the overall design. It’s small, and can even be flipped up against the wall when you’re done using it. So you don’t need to give up that valuable countertop space when it’s not in use. It really is a Foodi Ninja. 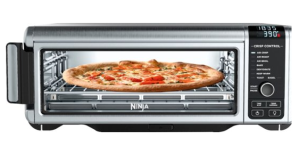