Whether you eat vegan products because of moral issues or health issues, finding delicious and socially responsible food options can be a challenge. Thankfully, more companies are sprouting up every day with products that will make both your tummy and your heart feel good.

Vegan products in the world of baked goods and faux dairy are widespread, but when it comes to meat-alternatives of meat-specific items, finding options that actually taste like the real deal can be a struggle. Thankfully, going vegan doesn’t mean you have to live without jerky, and it doesn’t get much more meat-loving than jerky.

Grab a pack of these for a great post-workout snack, to satisfy your savory tooth or for your next hike, camping trip or road trip. You can feel good about what you’re eating and putting in your body.

If you’re vegan and trying to avoid soy, finding options that fit within your diet can be difficult. Plant-based Blue Herbivore Wheat-Meat Vegan Jerky uses seitan instead of soy, making a product that is packed with protein while also low in fat and cholesterol-free. Made with wheat gluten, Blue Herbivore has the same chewy texture as real jerky, helping to trick your mouth into thinking you’re eating the real deal. 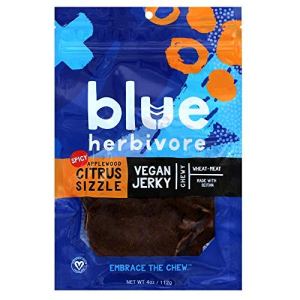 With Louisville Vegan Jerky, customers will get a product that is not only free from all animal by-products, but also gluten free. The artisan vegan jerky works as a pizza topping or as a snack on its own. Customers who have tried other brands picked Louisville as their favorite, noting the especially loved the pepperoni flavor. 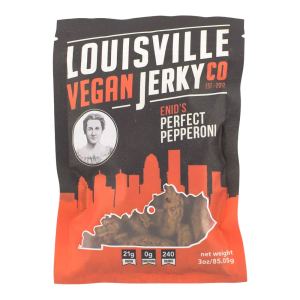 Noble Jerky uses a non-GMO soy protein to produce a vegan jerky that is high in protein and a great option for anyone looking for a snack pre or post workout. Customers love the texture as well as the flavor options, including Teriyaki, Sweet BBQ, Chipotle, and Original. 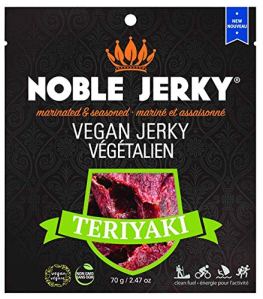 Unisoy Vegan Jerky is a non-GMO product free from chemicals and full of macros and proteins that will give customers energy without the crash. A healthy snack alternative that boasts low sodium, no cholesterol, and no saturated fat, the jerky is available in Teriyaki, Mild Spicy and Cracked Black Pepper. 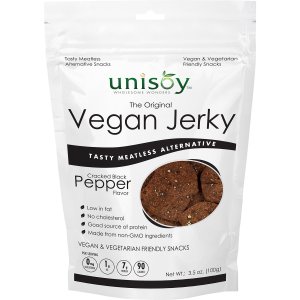