Perhaps you’ve heard them mentioned on restaurant menus or seen them during your latest trip down the kitchenware aisle. Maybe your foodie friend mentioned them in a recent Instagram post, and Google brought you here. Either way you’re curious about this mysterious ceramic kitchen tool that seems to be making the rounds.

Now you want to know…

What Is a Tagine?

A tagine, or “tajine” as it’s sometimes spelled, is a cooking vessel and serving dish of Moroccan descent that’s traditionally made of ceramic or clay. It has a low base and a cone-shaped cover that sits on top while your dish cooks inside. This cone cover traps steam inside as your dish cooks, returning liquid to the dish and resulting in moist dishes that are extremely rich in flavor. Usually, the dish is then served family style in the tagine itself.

So if you were wondering, “What is a tagine?”, the short answer is that it’s an important kitchen tool to understand if you love Moroccan cuisine, North African dishes, stews, perfectly cooked vegetables, tasty meat and well-seasoned nuts. 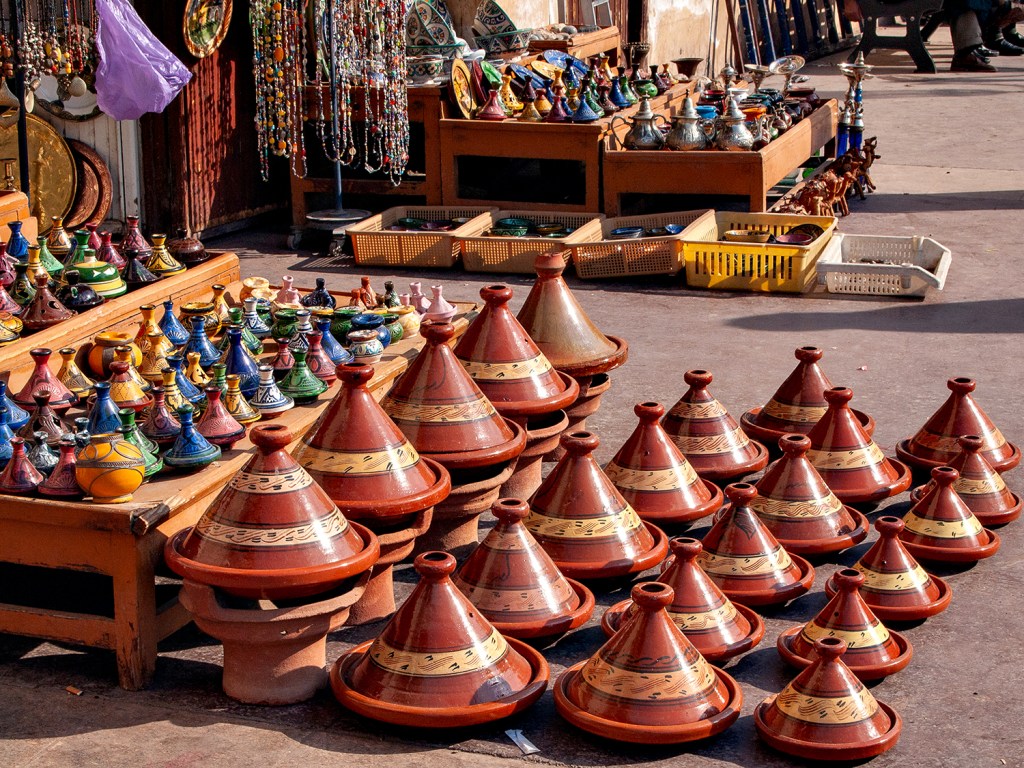 Traditional tagine pots at a street market in Marrakech, Morocco. Image By: Trialist/Shutterstock

Tagine is also the name of a North African dish that you can cook in the pot itself — a savory stew of meat, fish, vegetables, spices, nuts and dried fruit. Tagines are perfect for making stews, Indian curries, cous cous and roasts — think of it as the traditional slow cooker.

While this cookware is traditionally made from clay or terracotta materials, you can now buy stovetop-friendly tagines made from stainless steel or cast iron. There are a lot of absurdly specific kitchen tools available today, but you can think of the tagine as a low-tech alternative to slow cookers. Below, we’ll discuss the history of the tagine and some of the best tagines you can buy for your own kitchen adventures. If you want to learn more about cooking with a tagine, Masterclass has a great class on this subject.

History of the Tagine

We don’t know exactly when or where the tagine was first created, but we do know its origins date back a long time, to the 18th century or earlier. They may have risen to popularity during Harun al Rashid’s time as emperor of the Islamic Empire. Alternatively, this cookware may be based on similar Roman cooking pots.

The Romans made many different kinds of ceramics, and some think this tradition sparked the use of the material in North African cooking practices.

Either way, when you cook with a tagine, you can appreciate a simpler time of straight forward ingredients, slow cooking meats and spices, heavy sauces and comforting aromas. Enjoy this cooking practice that’s just as accessible nowadays, on our gas stoves in our elaborate kitchens, as it was back then. All you need is ingredients, a clay vessel and a heat source. Let’s do this.

How to Cook With a Tagine

While every recipe is different, there are some definitive guidelines to using this unique tool. We’ve included an outline below, with room for modifications based on your recipes and preferences. For step-by-step video instructions, check out the Masterclass guide to tagine cooking.

First off, soak the lid and base in water for two hours. Let it dry and then brush all of the sides with olive oil. Place it in a cold oven, heat it to 300-degrees and let the whole thing cook for two hours. Once it’s done, turn off the oven and let it cool inside the oven before removing it, washing it, and brushing it completely with olive oil once more before using it.

2. Laying the Base Layer

First you’ll need to construct a base layer of vegetables that act as a cushion for the rest of the ingredients, and a buffer between them and the heat. A bunch of chopped onions, celery, carrots or garlic cloves will keep meat from sticking to the bottom, burning and will add flavor to the whole pot.

Adding enough olive oil is crucial to the success of your tagine usage. This amount will slightly depend on the tagine that you’re using, but most call for at least a 1/4 cup. This oil helps make the sauce rich with flavor, texture and conducts the heat well during cooking.

Add your meat, fish or poultry in a pile in the center and layer vegetables around it.

Sprinkle spices all over the meat and vegetables so your sauce is rich and flavorful. Some of our favorite spices to use are cumin, paprika, mace, peppercorn, nutmeg, ginger, turmeric, and cinnamon.

6. Garnish and Make It Pretty

This step is just as important as the others, as presentation is a crucial part of making traditional tagine. Add color with bell peppers, olives or slices of lemon. You can also add bundles of fresh herbs for flavor and look with oregano, cilantro, rosemary and parsley.

7. Add Water, Broth or Other Liquid

The liquid is what creates the cooking steam in a tagine. Pour water, chicken stock or beef stock into the side of the tagine, covering the base layer of vegetables. Most recipes will call for 1 1/2 cups for a small tagine and 2 1/2 cups for a larger tagine.

Now it’s time to cook your tagine! Avoid super high heat and don’t rest the tagine directly onto a heat source — this may cause it to crack. A buffer will be necessary for electric stovetops. Place it on low-medium heat and let it simmer for a few hours. The cooking time will vary depending on what you’re making — beef and lamb will take longer than chicken and fish. Check your liquid after about 2 hours, if it’s already thickened add another 1/4 cup of liquid.

It’s time to serve! Let your tagine cool down for about 15 minutes once everything is cooked (use your judgement) and then serve your meal inside of your beautiful tagine. Traditionally, Moroccan bread is used to scoop up the goodness inside, you can also spoon the ingredients over couscous.

Now that you’ve got a handle on how to use it, let’s talk about a few different ones you can use. Here are some of our favorite tagines available to order online.

Today, you can find a lot of stainless steel tagines or cast iron models, a modern take on the traditional clay vessel. We’ve included a few traditional ones as well as the best tagines made from metal for you to choose from. Unglazed clay tagines are for more advanced cooks, while cast iron or glazed versions are a bit easier to handle and less likely to crack. We’ll walk through the special characteristics of each one so you can figure out which ones works best for you and what you’ll be cooking.

This tagine is made of glazed clay and is large enough to feed a whole family in one go with 12″ of space inside for your meats, seafood and vegetables. It’s perfect for the stovetop or oven and is handmade for passover. Be sure to submerge it in water before you use it for the first time, and don’t put it in the microwave or dishwasher. It’s safe to use on a stovetop at a low temperature and is oven safe up to 300℉.

The clay materials preserve and enhance the flavors you’re cooking with, and this tagine comes with a starter recipe booklet to get you going. 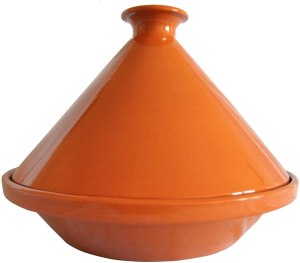 This beautiful tagine from Le Creuset is not made of clay and instead uses cast iron to cook your food with the same heat and moisture techniques. It’s a bit easier to regulate temperature control with this tool, and you don’t need to worry about it cracking. It’s a modern take on the traditional cooking tool and is made of colorful stoneware that will look great in your kitchen.

It’s got a wide rim so you can get a secure grip on it while transporting and it’s oven safe up to 500℉, a higher heat capacity than most clay ones. This cast iron tagine is recommended for those cooking with a tagine for the first time. 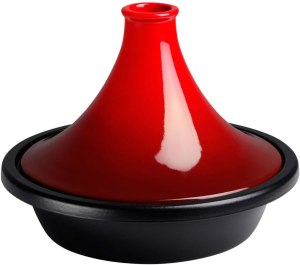 BEST FOR ALL COOKS

This tagine from French brand Emile Henry is suitable for everyone from beginner cooks to advanced Tagine users and is manufactured in France from entirely natural materials.

It’s safe to use on a variety of heat sources including the oven, stovetop, barbecue grill and under your broiler. It can handle a whole range of temperatures and can be taken from the freezer straight into the oven or microwave without cracking. The ceramic glaze on the outside is highly resistant so you can cook without a lot of fat, making your food lighter and healthier.

This piece of cookware is 30% lighter than its cast iron equivalent but handles heat and pressure just as well. Cook slow and controlled with this tagine and enjoy rich, full flavors. 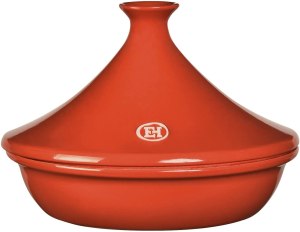 This tagine is made of stainless steel rather than clay or iron and cooks food faster due to the quick heat distribution. It’s got multiple layers of stainless steel, an aluminum core as well as base and walls that are 2-ply for thorough heating and moisture retention.

The steel can handle any heat source at any length away so there’s no need to buffer it on an electric stove, it won’t crack. It’s got a tall cone lid for sealing in moisture, flavors and nutrients throughout cooking and is oven safe up to 500-degrees. It’s also dishwasher safe for easy clean-up after your delicious meal. 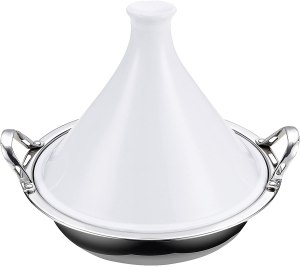 This tagine will look fantastic on your counter between meals and is made of high-quality materials that will conduct heat and cook just as well as the other options.

It’s perfect for everything from Moroccan stews to cous cous and roasts. This particular tagine is fired and glazed by artisans in Italy so each one is unique. It’s made of flameproof clay that’s been glazed for protection cooking abilities. It’s been hand-painted as well and is still oven and stovetop safe. It’s not made for induction.

It’s got that classic conical lid that circulates steam and moisture inside, and the knob top is easy to grip so you can easily reveal your beautiful creation at the table after cooking is finished.

This particular design comes in two different colors, blue and orange, depending on what you prefer for yourself or as a great gift to someone else. If you plan on serving your slow-cooked meal inside the tagine, which is traditional, then this is one of the best tagines you’ll find for home use. 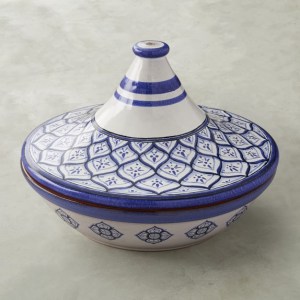