Staying cool in the summer heat isn’t always easy, especially when you’re on the go or in a remote area. When there’s no cooling breeze to stand in or shadow to hide under, it doesn’t take long for sunny days to feel overwhelming and uncomfortable. The smartest way to control your temperature and stay comfortable is to invest in one of the best battery-powered fans.

Unlike their corded kin, these fans aren’t tied to a wall socket and offer a number of other benefits which are especially handy for users who love beach days, camping or general travel. Read on to find out more.

The Benefits of Choosing a Battery-Powered Fan

Here are some of the reasons to choose one of the best battery-powered fans over their outlet-powered alternatives.

The Downsides of Using a Battery-Powered Fan

While battery-powered fans definitely have their benefits, it’s not all cupcakes and rainbows. Here are a couple of the biggest downsides to think about when investing in one of these remote area-ready devices:

Below you’ll find our top 10 picks for the best battery-powered fans. We’ve included a range of options for different price points and situational uses. Each device is also tried and tested and well-reviewed by users. Read on to find the right device for your needs.

With a full charge of its 13200mAh lithium-ion battery, the Whirlwind Life Battery Operated Fan can deliver up to 24 hours of cooling (six hours on the highest setting). It sports a large, 12-inch metal fan blade for increased power. The design also includes brushless DC motor technology to keep the fan more quiet, stable and reliable when functioning. Additionally, this user-friendly fan includes buttons for controlling the wind speed, a clear LED display and a USB port which can be used to charge devices from the rechargeable battery. 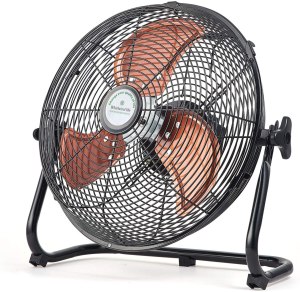 2. Honeywell Turbo On The Go Fan

At under $14 and with over 6,000 five-star ratings, this Honeywell Turbo On The Go Fan is the budget-friendly and personalized answer to cooling that you’ve been searching for. The smart, handled-integrated design allows you to comfortably carry it, hang it or even place it on a floor or tabletop, depending on your preference. It’s ideal for at-home and on-the-go use and comes with a USB cable that can be used to charge or power the fan, allowing you to choose between power sources. Furthermore, while the fan is definitely compact in size, you’ll be able to feel the airflow within three feet of the fan’s comparatively powerful blades. 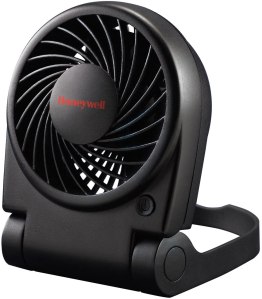 Honeywell Turbo On The Go Fan

Sporting a compact and retractable design, the JISULIFE Handheld Fan is an ideal choice for users searching for a reliable pocket fan. From one single full charge, the fan can deliver up to 46 hours of cooling on its lowest setting (or 13 hours on the highest). It also incorporates a handy carrying tether and an LED flashlight which is great for emergency situations. Plus, the 4800mAh battery can also function as a power bank for charging your devices on the go. 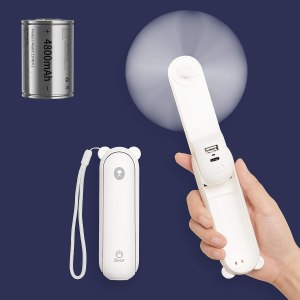 The Drchop-NA Camping Fan has a more rugged outward appearance than many of the alternate options on our list, and with good reason. This remote-controlled, battery-powered fan is built to come on your adventures, whether that’s beach days, camping adventures or fishing trips, it can be right there with you. In addition to a multi-speed fan, this device also features a LED lantern, further increasing its use in the field. You can also choose from three different colors, including bright yellow or orange. 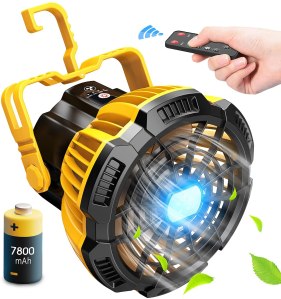 When it comes to staying cool, you can’t leave the kids out. If your kids are feeling the heat, try giving them one of these O2COOL battery-powered fans. Each pack includes two individual fans, in your choice of green, orange or gray. The fan’s design includes a four-inch fan head, a multi-direction, flexible neck and a handy clip that can be used to attach the device to strollers, tables and bed frames. Each set of new AA batteries should deliver around 10 hours of fan power. 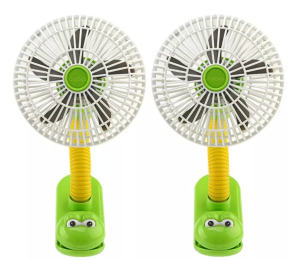 If you’re really going to be on the move, and a stationary fan just isn’t going to cut it, definitely check out this GAIATOP Personal Neck Fan. The round-the-neck design delivers air to your head from all directions while the three optional airspeeds ensure you get just the right amount of cooling you need. At 31dB, the fan also runs quietly enough as to not distract you from your task at hand. In addition, the fan is available in four different colors and comes backed by over 2,400 five-star ratings from happy Amazon users. 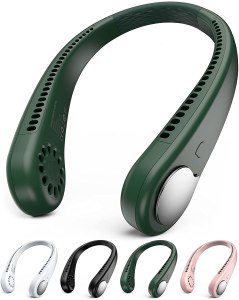 The great thing about the FRIZCOL Clip-On Fan is that it, well, clips onto things. Thanks to the integrated spring-loaded clip and built-in hook, it’s possible to mount your fan pretty much anywhere you desire. This includes flat surfaces as the clip also functions as a stand. Functionally, the battery-powered fan’s 11800mAh battery delivers two functions in the form of powering the fan itself and acting as a power bank for charging your other electronic devices. 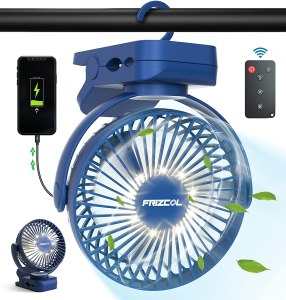 With over 15,000 five-star ratings, the SkyGenius Battery Operated Clip-On Mini Desk Fan is one of the most popular battery-powered fans on our list. The design offers 360 degrees of rotation in both horizontal and vertical orientations. The portable-sized fan also sports a handy, built-in clip for attaching the fan to desktops, treadmills and other surfaces. Handily, the clip also doubles up as a normal stand so you can place it on any flat surface as well. Power-wise, the fan includes a rechargeable 2200mAh 18650 battery which delivers up to six hours of use from a full charge. 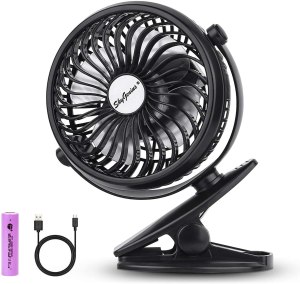 Thanks to its highly adjustable, wraparound-able legs, the COMLIFE Stroller Fan can attach or sit on just about anything you need it to, including strollers. It’s available in either a four or a six-inch version and offers four different fan speeds for more tailored airflow. The built-in, high-capacity Li-ion battery also delivers up to 53 hours of use, even at the device’s highest speed. Additionally, the fan is ultra-quiet, making it a great option for bedroom or office use. 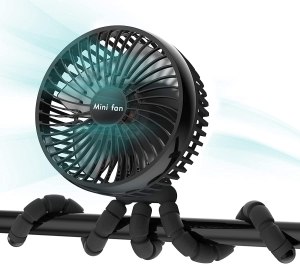 If you’re looking for greater versatility in your battery-powered fan, the UNITEDTIME Desk and Table Fan may be the option for you. By incorporating a telescopic pole in the design, this fan adjusts from 16 to 41 inches tall. You’ll also be able to adjust the angle of the head and control the fan from a distance using the supplied remote control. For greater comfort, you’ll have four fan speeds to choose from. Additionally, the fan comes in either black or white and sports a built-in, rechargeable 10800mAh battery which delivers up to 33 hours of use. 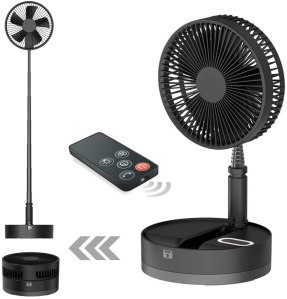