Why go to your standard bar when you go to one that also let’s you play games while you get buzzed? Well, this logic is apparently catching on, and the revival of the arcade bar, or bar arcade for short, is sweeping the nation–and understandably so. There’s something nostalgic and effortlessly fun about playing video games in a retro setting, as opposed to standing in crowded bar forced to make small talk with strangers that you can barely hear over the blaring music.

Why not unleash your inner child with a retro–and buzzed–gaming sesh next time you decide to go out for the night. To help get you motivated, we’ve rounded up the best bar arcades across America. Game on! 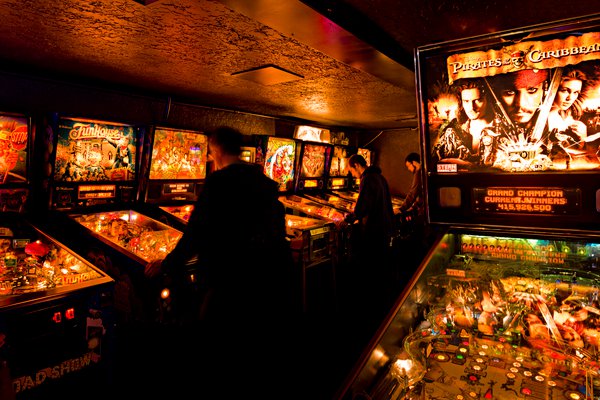 This Southern California super-arcade is famous for its expansive gaming options, but also because it’s seated in the Puente Hills Mall, where they filmed the 1985 flick Back to The Future. Regardless of its cinematic appearances, this arcade also offers bowling, a full service restaurant, and of course, a full bar. They’ve also got an impressive vewlix and candy cab lineup, with plenty of rare games that you won’t find elsewhere. 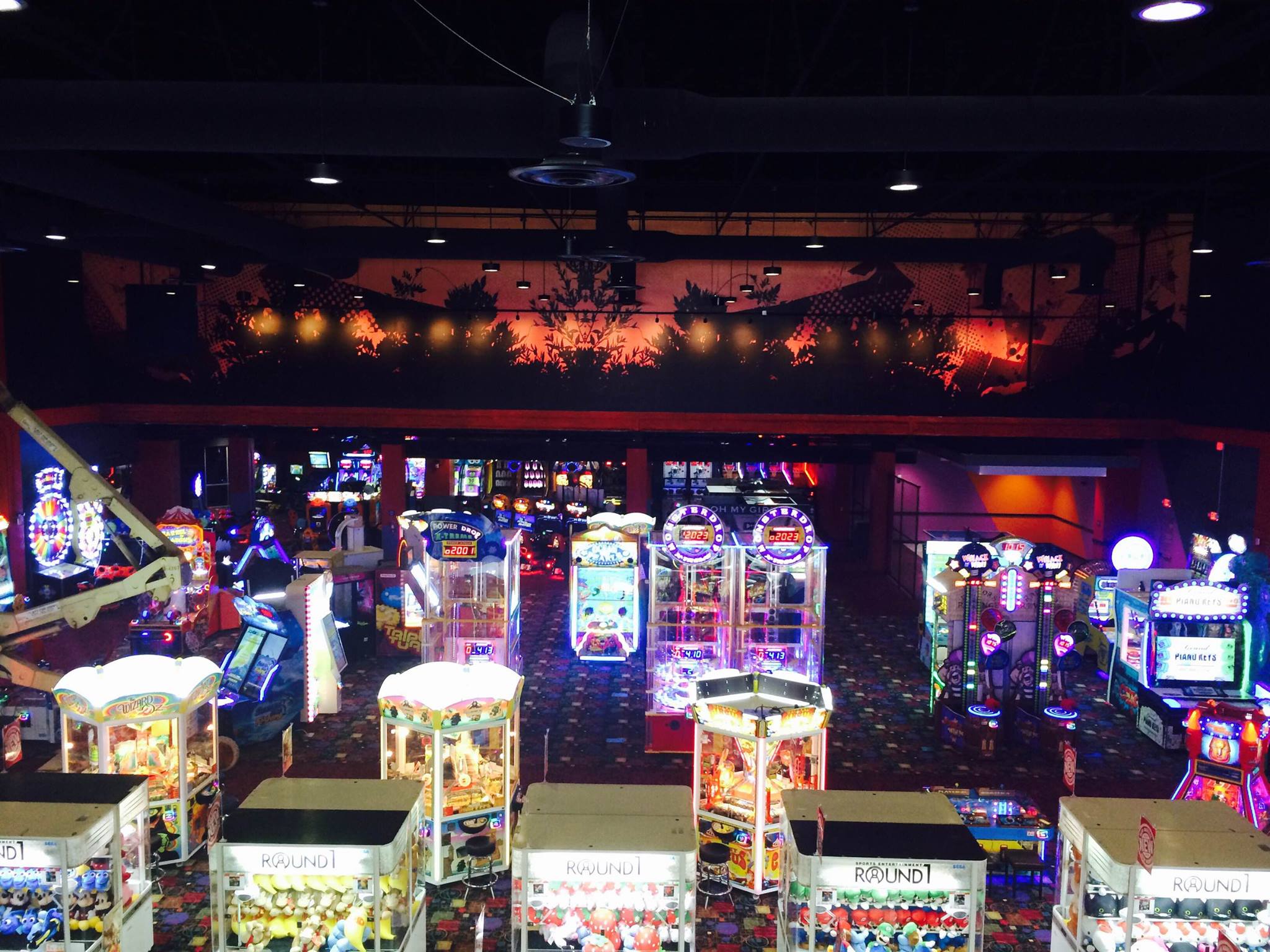 Image courtesy of Round 1
Round 1 Bowling & Amusement

HQ Beercade in Chicago’s River North neighborhood takes a “low maintenance” bar setting to a new level with an ample selection of vintage entertainment. The impressive, two-story venue is well stocked with over 65 vintage arcade and pinball games, plus more than 28 rotating drafts and 40 canned craft beers to choose from.

Even if you’re not a gamer, the interior design and eclectic decor in this arcade is enough to draw you in. It’s a mash-up of old world swank mixed with 80s era disco. The walls feature contemporary graffiti art, neon signage, recycled type writers, sinks, and discarded tape cassettes. HQ also operates a second location in Nashville, TN. 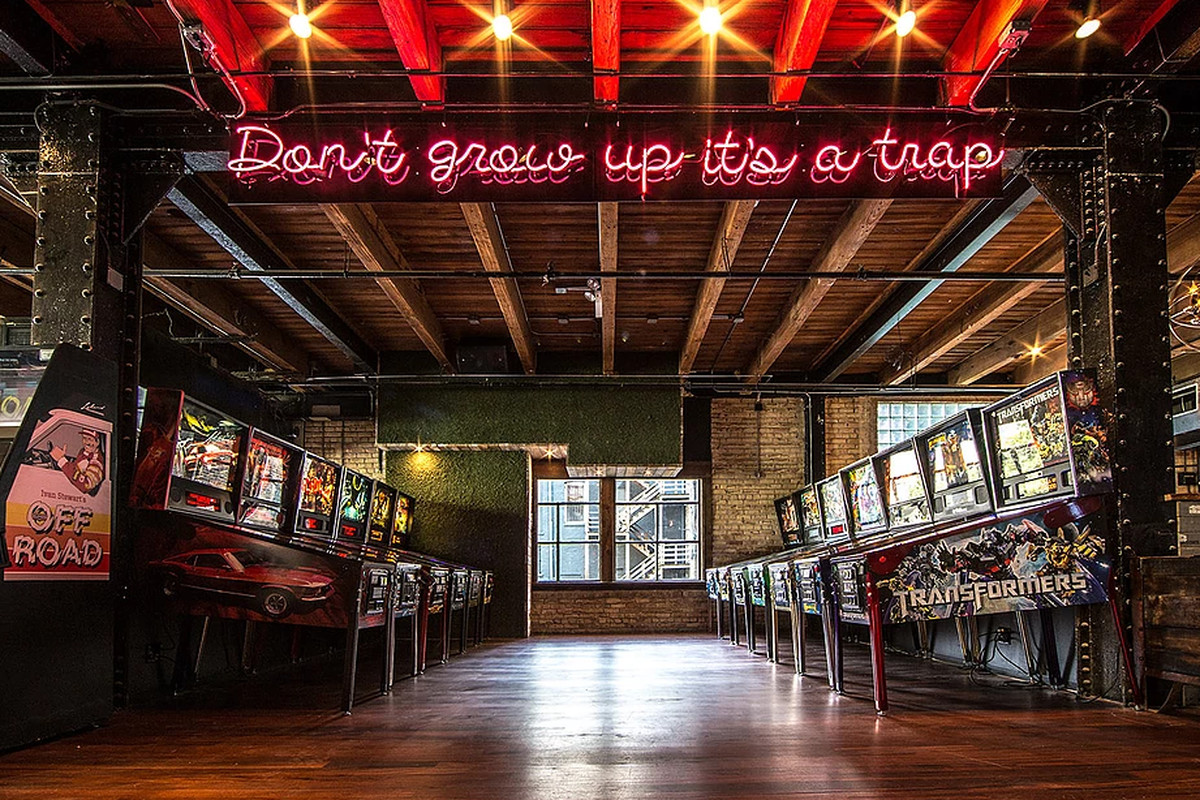 Most week nights are themed, with popular events including Ladies Night Out, Pretty in Black and Cobra Sunday’s, where a different DJ performs each week. Cobra is a no frills arcade bar for an old-fashioned fun without pretense. There’s no food served and no kids (21 and under) allowed. 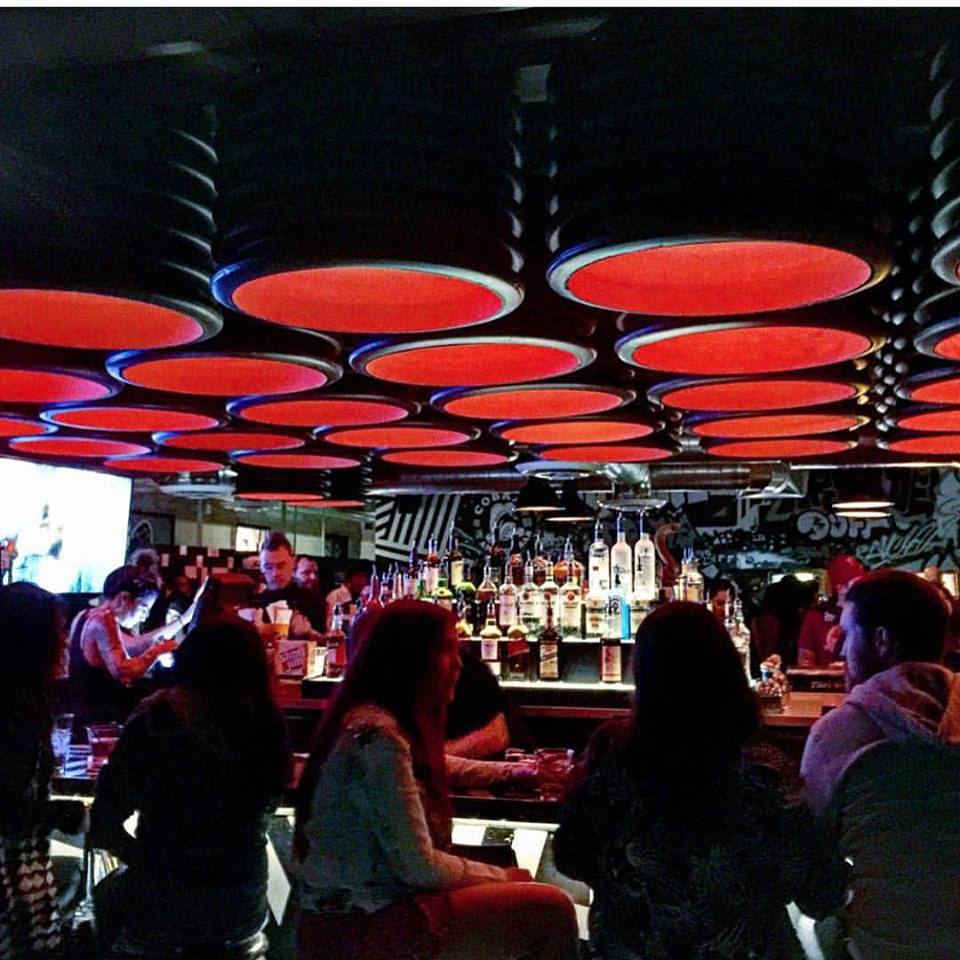 An elevated spin on the classic arcade bar, the Coin-Op Game Room in San Francisco is a Tron-themed bar serving up science-inspired cocktails with unexpected, experimental ingredients. For instance, your gin and tonic will be infused with peppermint chlorophyll and may or may not contained colored ice cubes.

The arcade is equipped with the classics, from pinball to Pac Man, and an impressive gourmet food menu serving up dishes like quinoa tater tots and sausage donuts. There’s also another Tron-themed addition to the venue–a  hidden futuristic speakeasy called The Grid in which guests can only access The Grid through a door designed to look like a Tron arcade game. 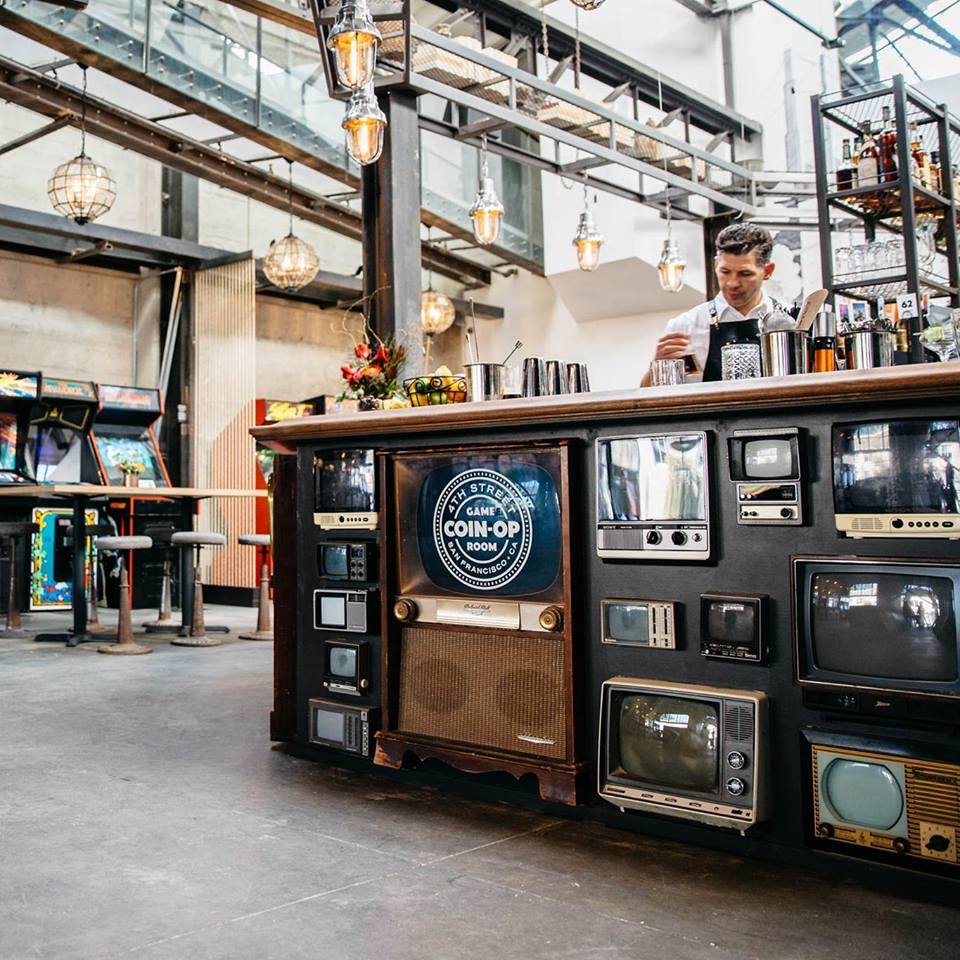 Both locations host free, weekly tournaments and live music shows. They also have a packed monthly event calendar with themed nights such as the Selfie Pinball Tournament and Fireball Fridays, where you can enjoy a shot for just $3. 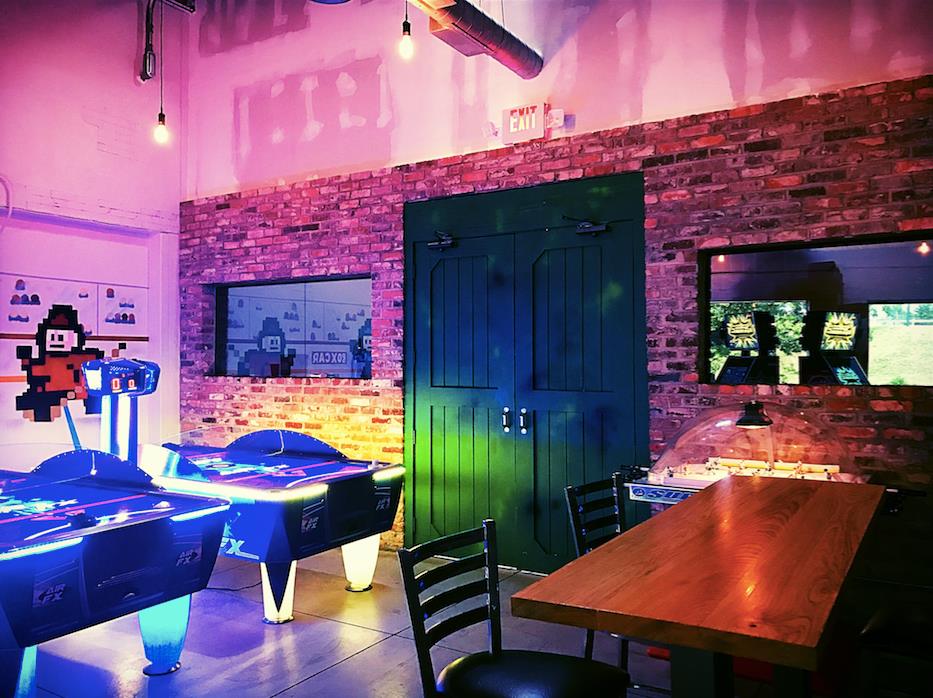 Located in the heart of LA’s ultra hip Echo Park neighborhood, Button Mash not only offers rare and one of a kind arcade games from what gaming aficionados have dubbed “the Golden Age of Arcades,” or more simply, the late 70s and early 80s. You won’t find mortal combat or Halo in this venue, but you can indulge in more deep cut games like Frogger and Mushroom World.

They’ve also got a pretty impressive restaurant get up, supervised by the masterminds behind Starry Kitchen and Grand Star, chefs Nguyen and Thi Tran. As expected, the cuisine features a creative array of  Asian fusion dishes, specializing in vegan, vegetarian, and of course, gluten-free cuisine (it is in LA, after all). If you’re a carnivore, no need to fret, they’ve got a killer double cheeseburger and spicy Korean pork sandwich. 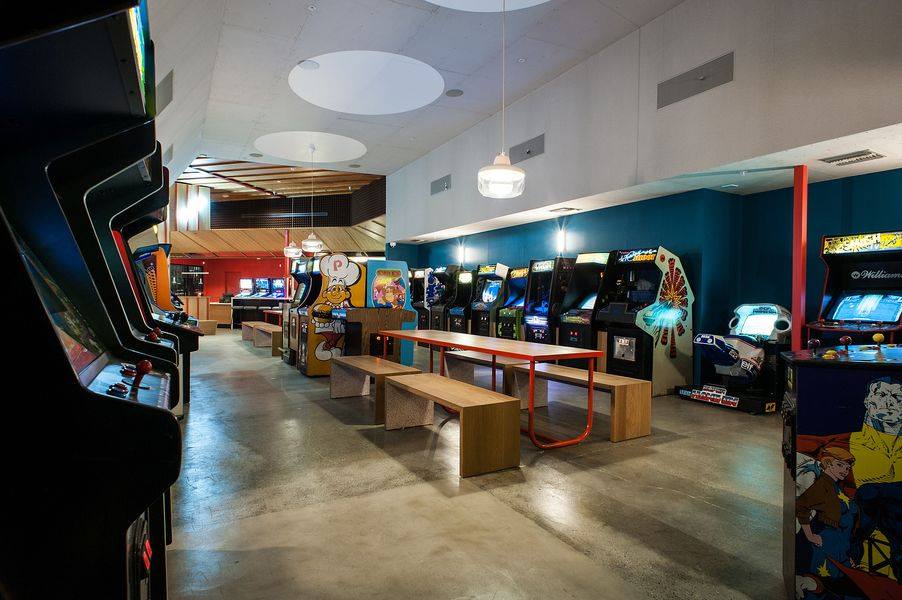