* Fourth of July falls on a Tuesday but the parties begin this Friday
* Fireworks, beach parties, and eating contests will be held to celebrate America’s birthday
* Here are some of the best ways to celebrate across the country

Independence Day may fall on a Tuesday this year, but that doesn’t mean parties are being cancelled. Fourth of July weekend officially kicks off this Friday, June 30, and with an extended holiday weekend and the birthday of our country, there are plenty of different ways to celebrate.

What better place to celebrate America’s birthday than the U.S. capitol? This year the annual Capitol Fourth concert (broadcast live from the West Lawn at the Capitol) will be hosted by John Stamos and will include performances by The Beach Boys, Kellie Pickler, The Blues Brothers, Trace Adkins and more. Choral Arts Society of Washington, the U.S. Army Herald Trumpets, the U.S. Army Ceremonial Band and Members of the Armed Forces carrying the State and Territorial Flags will also participate in the concert. The show will conclude with a rendition of Tchaikovsky’s “1812 Overture” with live cannon fire. While in D.C., we recommend staying at one of the Capitol’s finest accommodations, the Morrison-Clark Historic Inn & Restaurant. 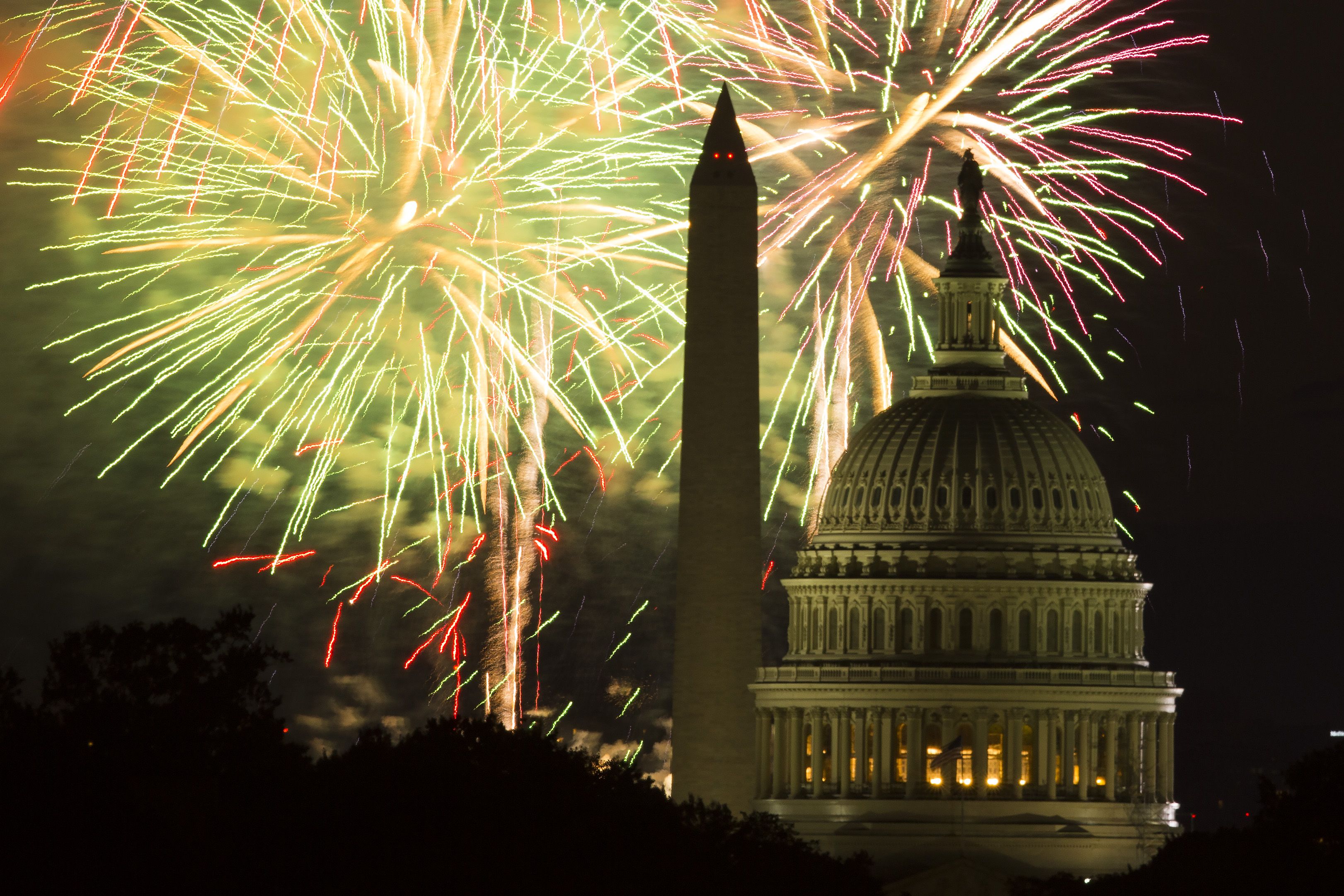 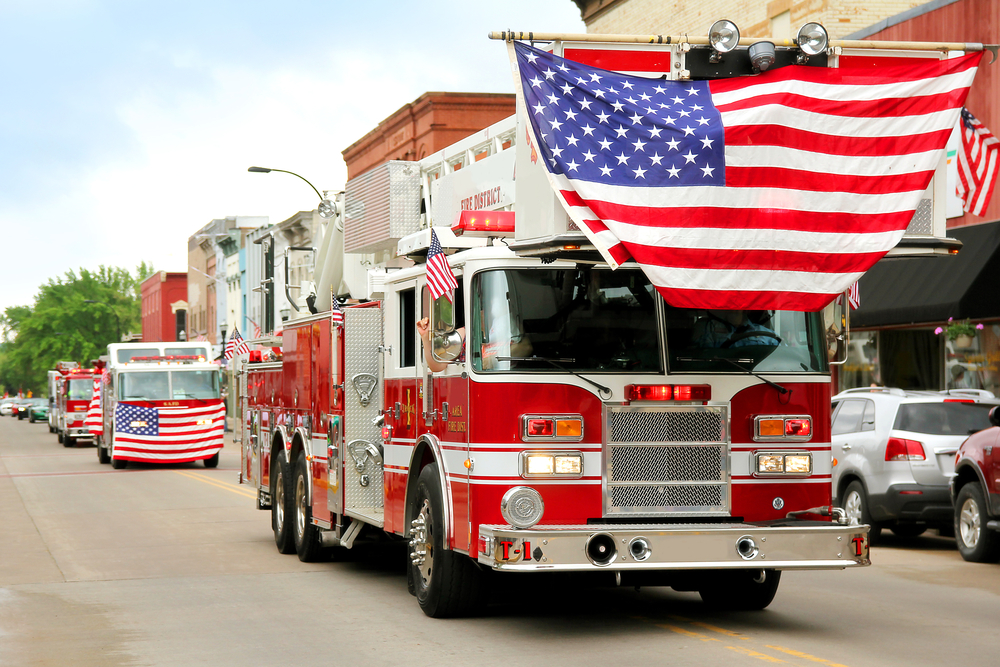 In 2016, Travel + Leisure magazine named Flagstaff, Arizona the best destination to celebrate Independence Day. This year the city’s renowned Fourth of July Parade has over 100 entries and is expected to draw in more than 10,000 people. Other notable events include a Ford Mustang’s 50th birthday Car Show on July 2, which will include a free barbecue, and The Hopi Arts and Culture Festival (July 2 and 3). The patriotic weekend will come to a close with the annual Independence Day concert with a celebratory performance featuring Flagstaff’s professional orchestra. The Little America Hotel is a great option for a luxe yet homey place to stay in Flagstaff.

This year marks the 91st anniversary of Americafest, hosted at the historic Rose Bowl Stadium in Pasadena, CA (greater Los Angeles county). The all-day celebration includes all things America, from food and crafts, to inflatable rides and games that the whole family will enjoy. This year’s event will also include live motocross stunts and performances beginning at dusk, with the grand finale of fireworks at 9 pm. When visiting Pasadena, stay the Langham Huntington Hotel, located minutes away from the Rose Bowl Stadium and adjacent to the must-see Huntington Library. 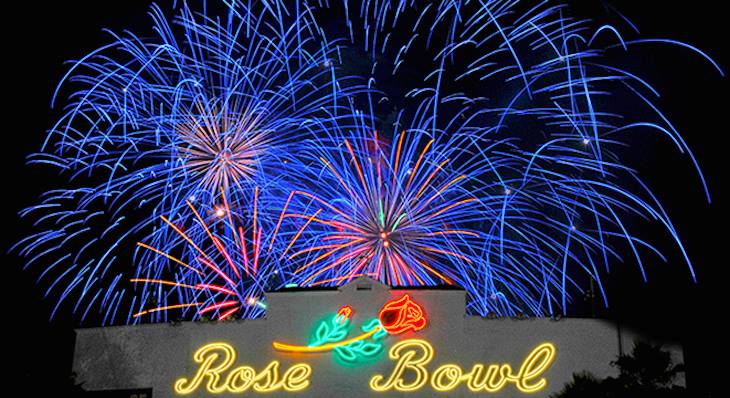 Coney Island is one of New York’s most historic, waterfront destinations. The celebration will begin the century-old (the first contest was held in 1916!) Nathan’s Hot Dog Eating Contest, followed by specials at the Coney Island Amusement Park–including a special performance by the Coney Island Circus Sideshow. Fireworks displays will kick off the holiday weekend on Friday, June 30, with a second show on Monday, July 3rd for those who want to celebrate early. Make a vacation out of it and stay at one of Downtown Brooklyn’s best boutique hotels, Hotel Le Bleu. 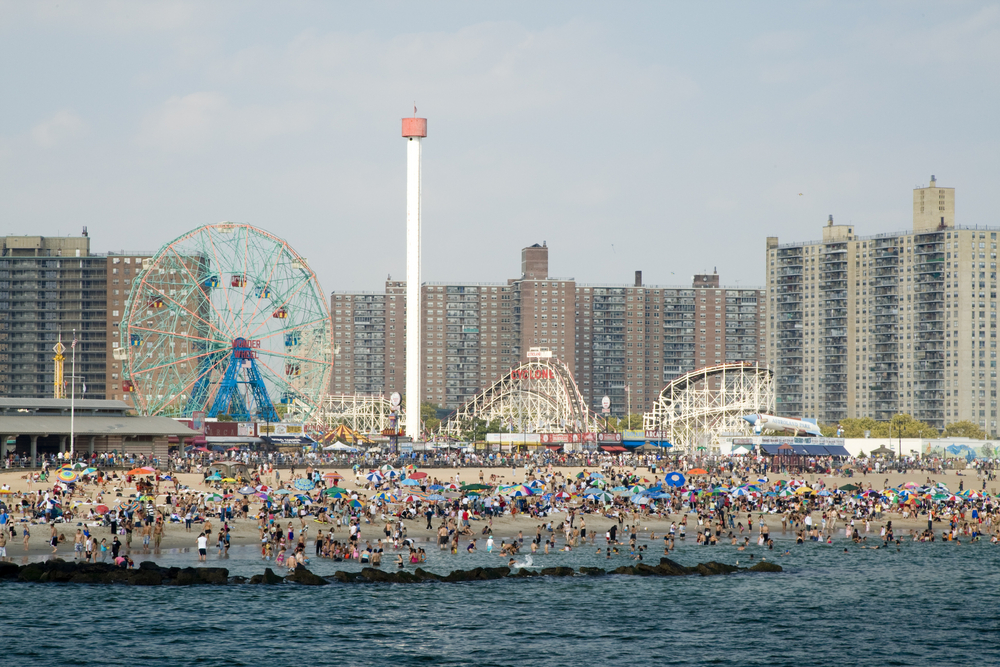 Named the best Independence Day party in South Florida, America’s Birthday Bash in Miami’s Bayfront Park kicks off at 10 am on July 4. This annual celebration has entertainment for all ages, with an interactive kids zone opening at 3 pm, expansive Budweiser Beer garden for the adults (opens at 2 pm), and live performances all day at the beer garden’s main stage. As expected, the event will come to an end with a display of fireworks at 9 pm. While in one of America’s best towns for parties and celebration, stay in style at the swanky SLS hotel. 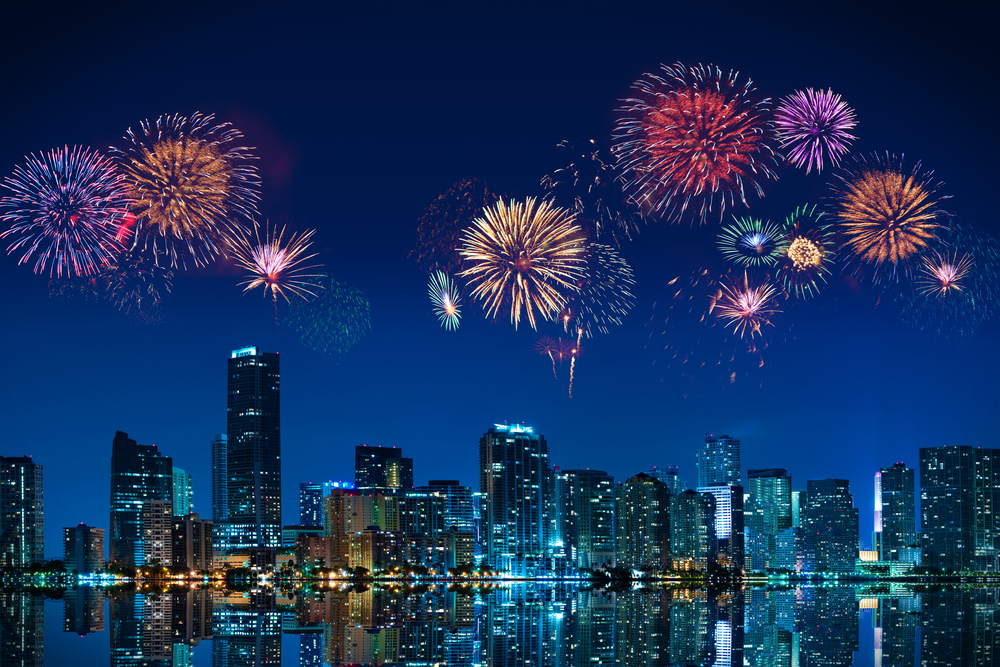 Las Vegas is one city known to party and celebrate without apology. This 4th of July, there will be plenty of options to celebrate for both adults and kids. Caesar’s Palace hotel (located conveniently on the strip) will host a wide array of events beginning this Friday, June 30th. The events will kick off on Saturday morning with Silent Savansana, a free, poolside yoga session provided by Lululemon Athletica. Next in line will be live performances at the hotel’s Alto Bar from indie-rock band Atlas Genius. Sunday will include an all-day pool block party at the hotel’s Roman Plaza and Spanish Steps with a live DJ, life-size games, plenty of drink specials and live performances by Pia Toscano. The evening will wrap up with the hotel’s annual fireworks show at 9pm (one of the best shows in the city). 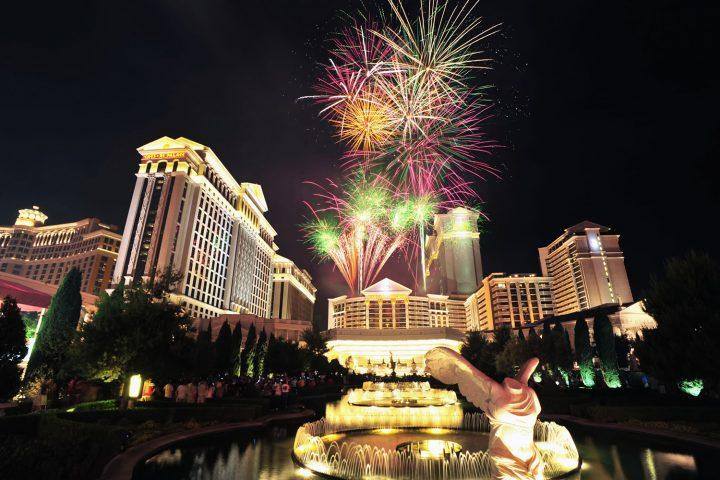 NOLA kicks off Fourth of July weekend with the annual ESSENCE Fest, beginning on June 29th through July 2nd at the Superdome. This year’s music festival marks the 25th birthday of ESSENCE magazine. The festival has become one of the world’s largest celebrations of African-American culture, arts and music with an emphasis on highlighting some of the best jazz, hip hop, gospel and R&B artists from around the world. This year’s lineup includes Monica, John Legend, Mary J. Blige, Chance the Rapper and many more. Of course, there will be many options for viewing fireworks on Monday and Tuesday, but we suggest heading to the annual Go 4th on The River celebration. The event will begin at 6pm with fun activities for patrons of all ages a fireworks display at 9 pm. 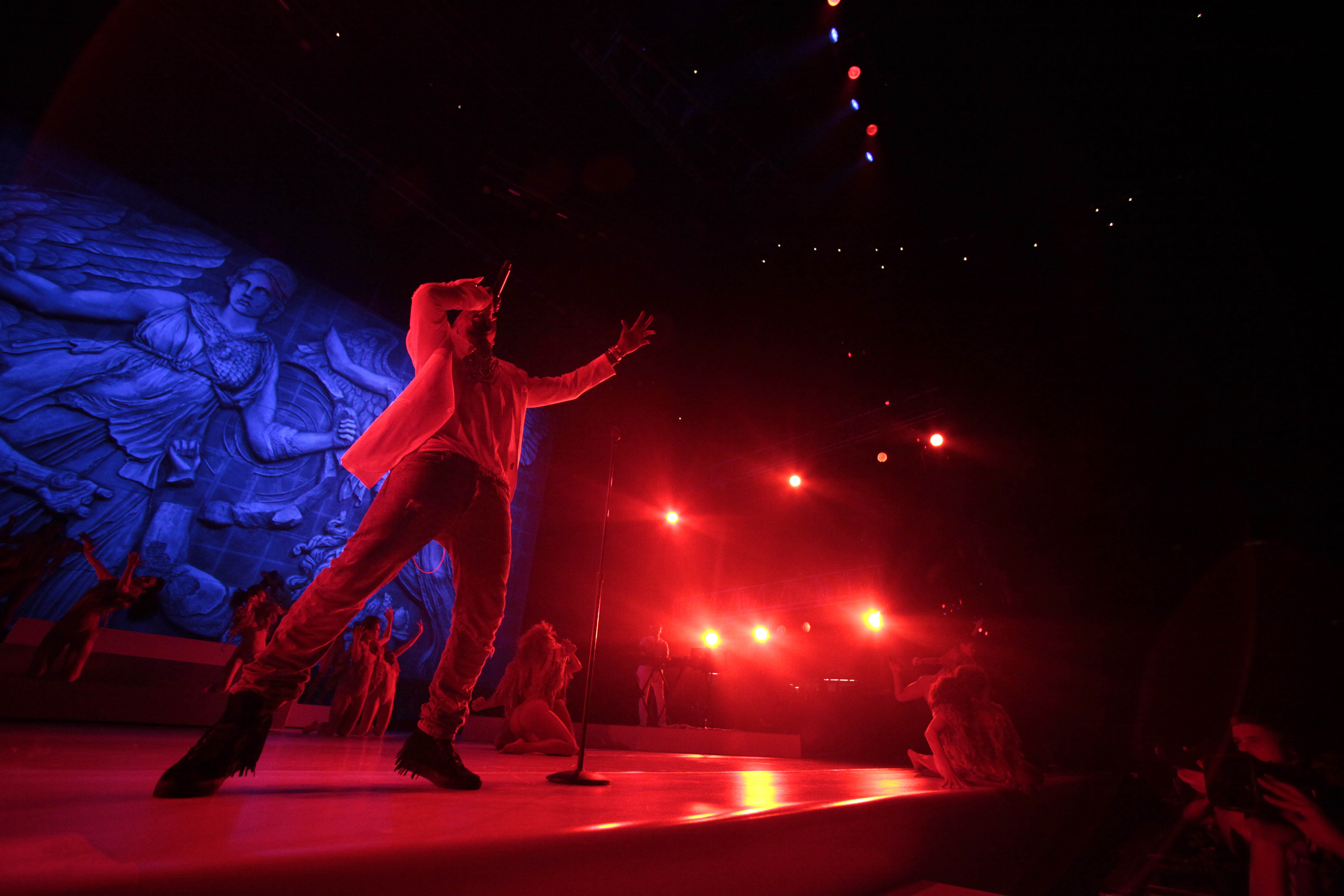 8. Red, White, and Brew at The Georgia Aquarium in Atlanta, GA

Celebrate Independence Day early at the 4th annual Red, White, and Brew event at the Georgia Aquarium on July 1. Attendees will get to enjoy a wide range of craft beer and feast on barbecue catered by Wolfgang Puck while viewing the impressive aquatic life from the aquarium’s Ocean Ballroom. Guests will also have full access to the aquarium, which is home to over 500 different aquatic species including manta rays, beluga whales, and whale sharks. Best of all, proceeds from ticket sales will benefit Georgia Aquarium’s Sponsored Education Admissions (S.E.A.) program. Adult admission is $65. Located less than half a mile away from the aquarium, the Hotel Indigo Atlanta is an optimum choice for a comfortable and conveniently located stay. 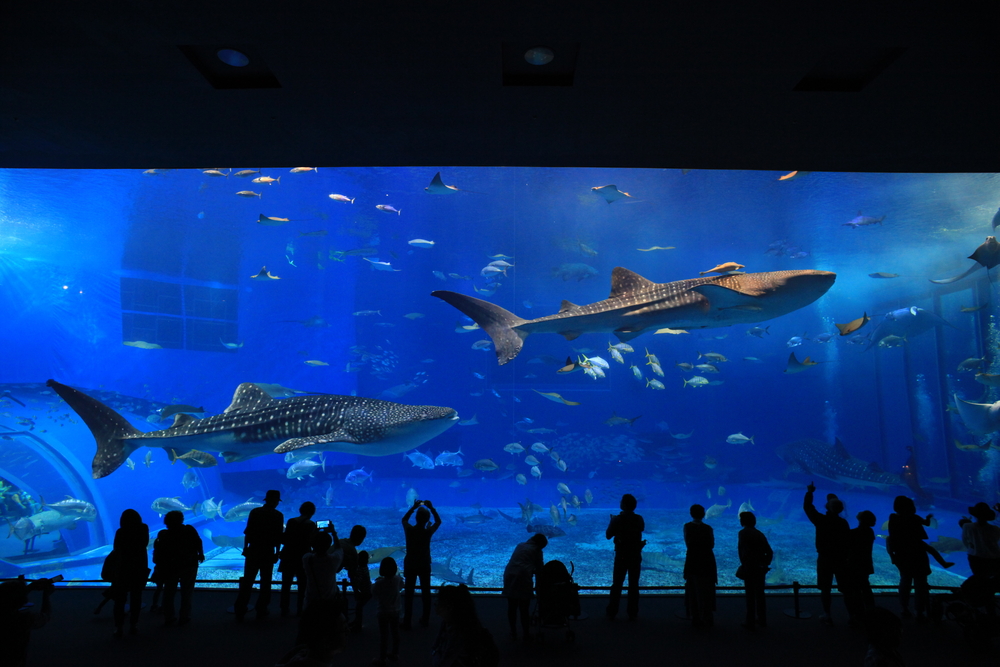