Road trips are a great way to explore new sites with little commitment, whether you’re planning an extended journey with the whole family or just taking a day-cation with your S.O.

America is the home of thousands of famous and lesser known roadside attractions and tourist sights, that blur the lines of folk art and pop culture kitsch into a unique aesthetic that’s become a part of the country’s history and cultural signature. Here are 10 of the best roadside attractions to stop and see.

Located in the desert town of Niland, CA, Salvation Mountain is colorful, man-made mountain designed and constructed by the late Leonard Knight. The massive sculptural wonder is decorated with bold murals, Christian motifs and embellishments derived from an array of mixed materials including glass bottles, recycled tires and glass windows. Knight’s desert masterpiece visualizes his dedication to spreading the overarching theme of “God is Love.” This remarkable work of art is the result of 28 years of construction, and it marks Knight’s second attempt of creating a standing structure (the first mountain collapsed). Stay at the nearby Calipatria Inn & Suites. 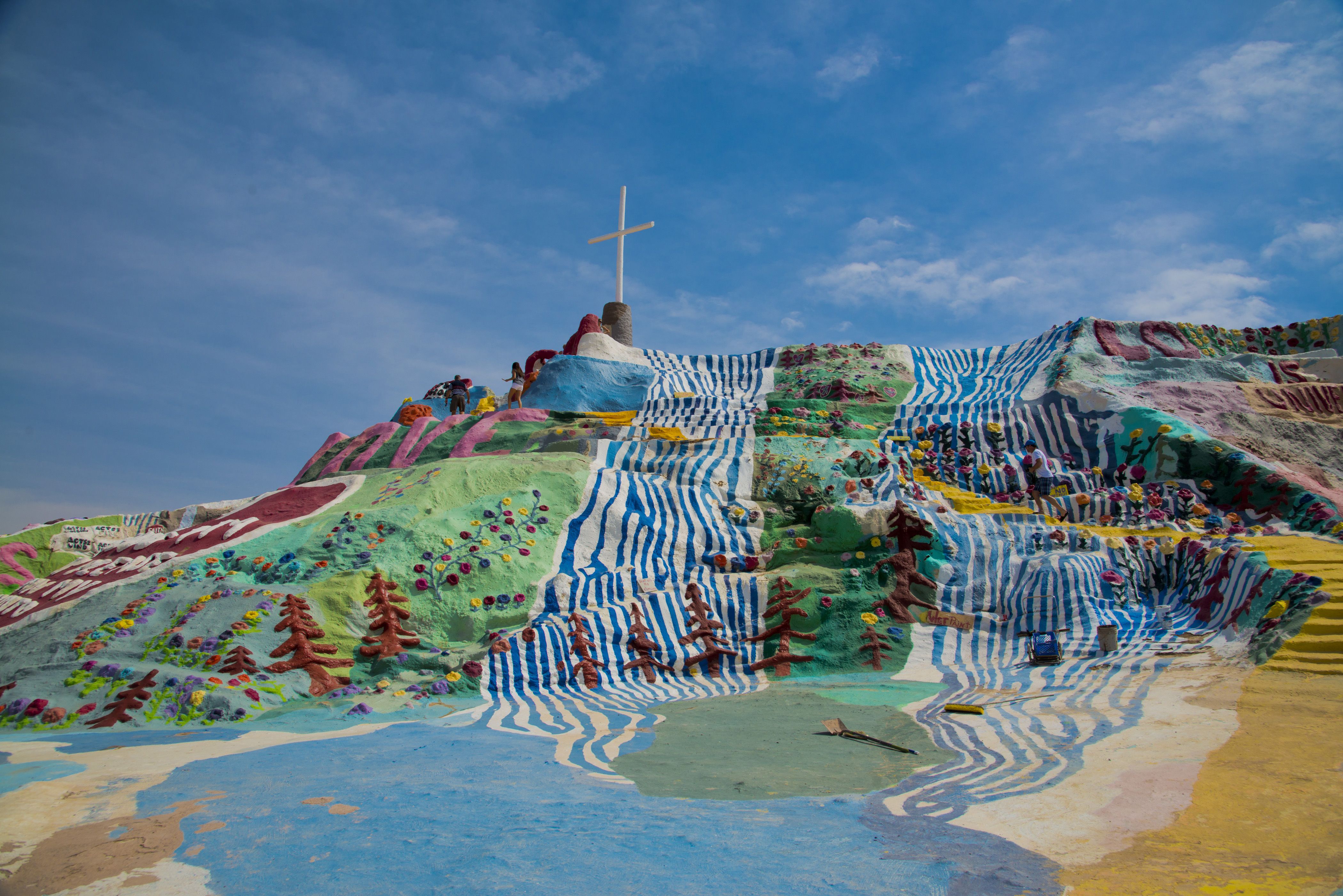 Yet another incredible architectural work inspired by theology, Cano’s Castle in Antonito, CO stands out sharply from its bordering surrounding of standard track homes in a quiet neighborhood. The modern castle, as it’s been dubbed, stands tall with two shimmering towers, constructed primarily from recycled beer cans, hubcaps and other forms of recycled metal. The structures were constructed by Native American Vietnam war veteran, David “Canos” Espinoza. He began building his castle in 1980 and continues to add to it on a daily basis. This whimsical “castle,” made of well, junk, is a stunning structure and a testament to high trash art. Stay at the Steam Train Inn, located just from Cano’s stately towers. 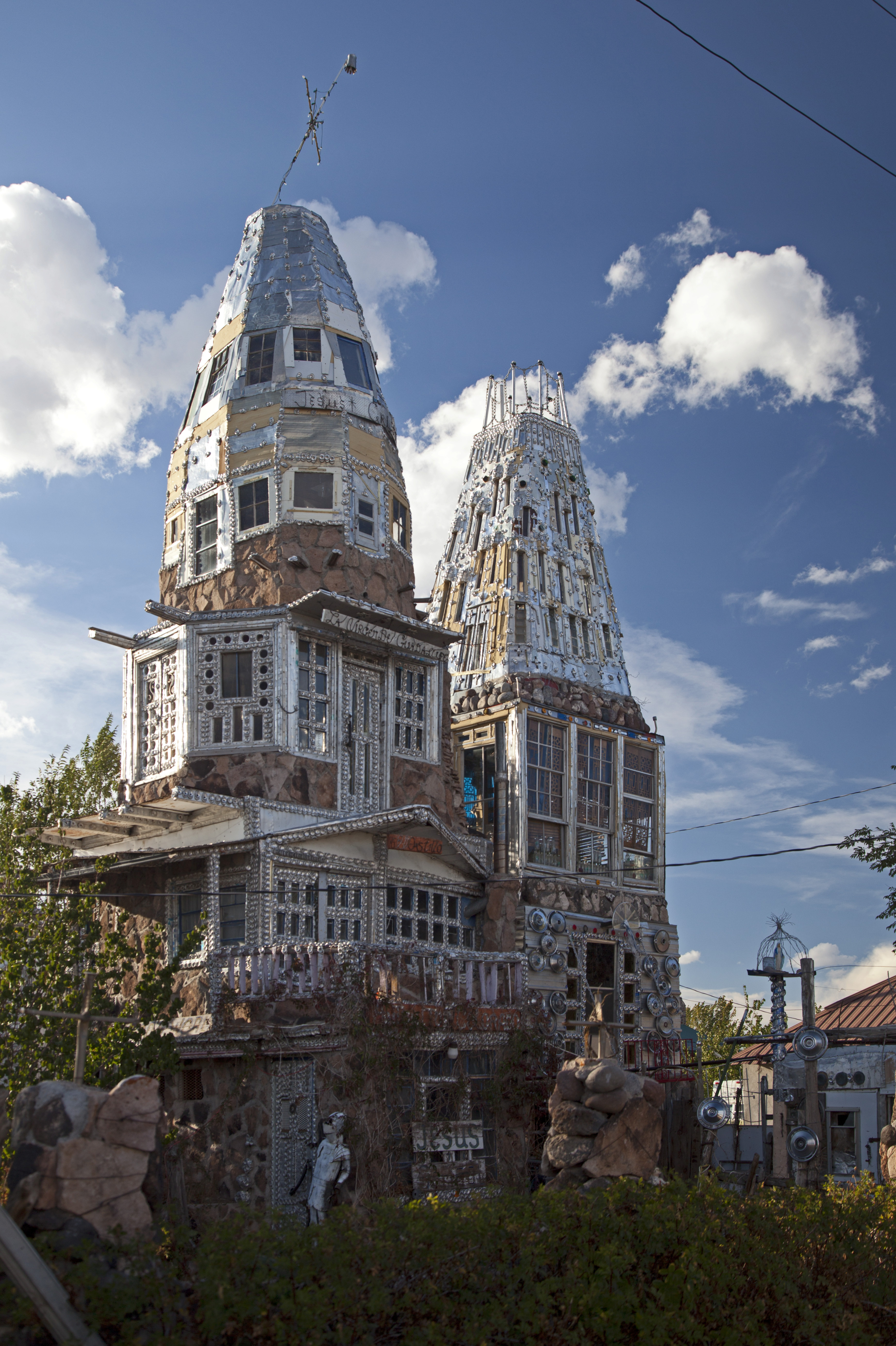 Perched along highway 24 (can also be seen from I-70) in Goodland, KS, stands an impressive reproduction of Van Gogh’s most infamous still life, “3 Sunflowers in Vase.” The giant easel stand stems from a project started in 1996 by artist and teacher Cameron Cross. The easel is constructed of metal and the structure weights over 40,000 pounds, effectively rendering it the world’s largest “easel.” “3 Sunflowers in Vase,” marks the third installation piece in Cross’s Big Easel Project. Extend your journey of Kansas and stay at Goodland’s Holiday Inn & Suites. 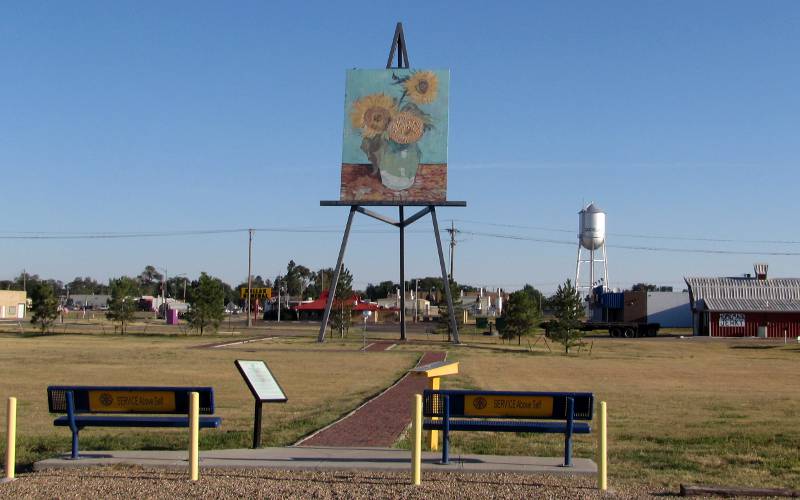 Beloved by fashion bloggers and avid intagrammers, this art installation seated in the art mecca of Marfa, TX has quickly become not only a roadside stop, but a full-blown tourist destination. Beloved by celebrity visitors like Beyoncé and Solange, this permanent installation work was installed by artists Elmgreen and Dragset in 2005. Prada’s creative director, Miuccia Prada approved the project and selected the apparel to be displayed in a mock retail store. Relax and enjoy the creative town (we suggest checking out artist Donald Judd’s Judd foundation) and stay close by at the elegant Hotel Saint George. 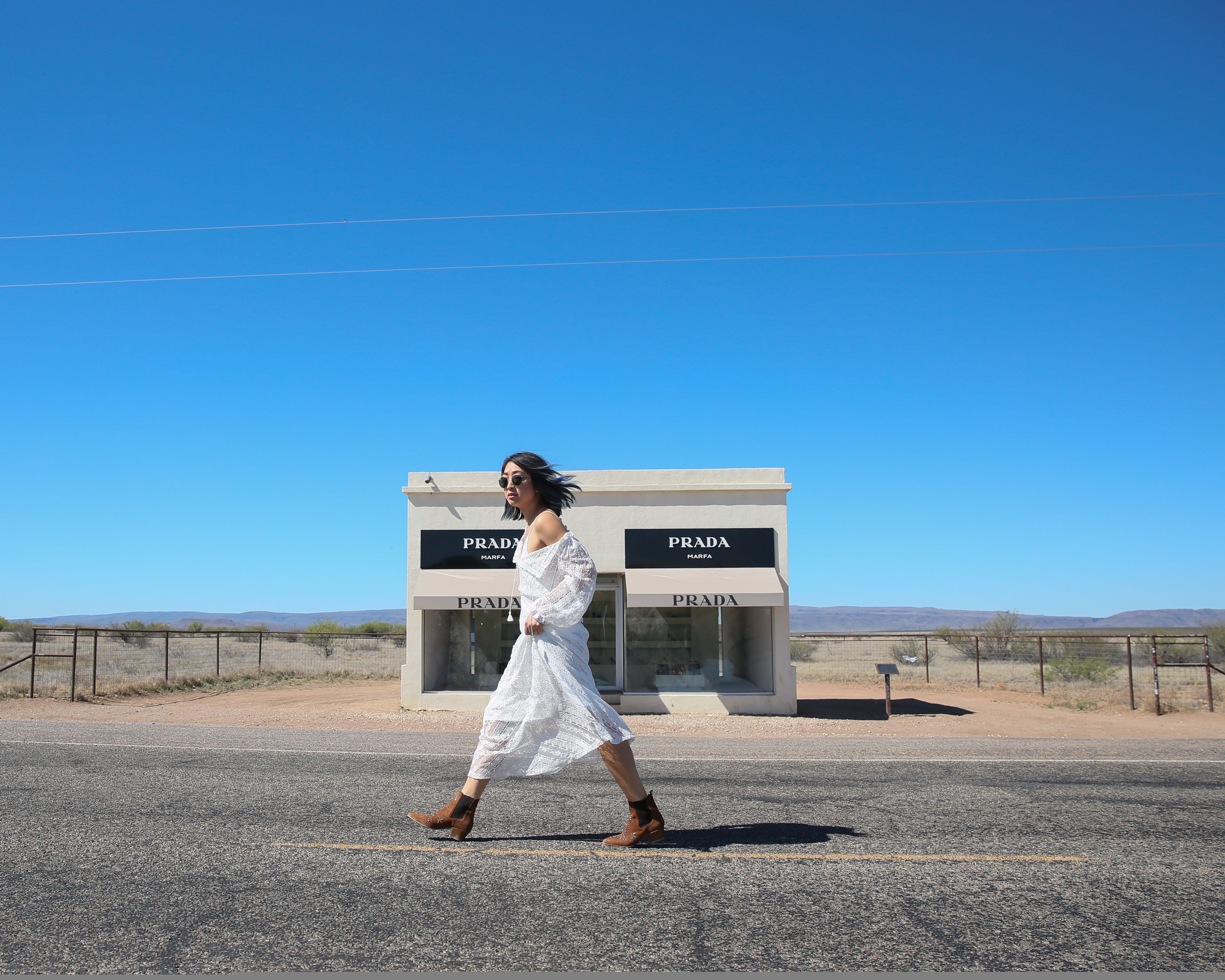 Drawing inspiration from the iconic Flintstones’ franchise, Bedrock City Amusement Park in the small town of Williams, AZ alongside highway 180, is a small collection of outdoor statues. Adjacent to the Yabba Dabba Doo camping grounds, this middle-of-nowhere site is a piece of pop culture history and a total desert gem. If you’re on your way to the Grand Canyon, make sure to stop and take a picture with the giant Fred. Once you make it to the Grand Canyon, retreat in The Grand Hotel. 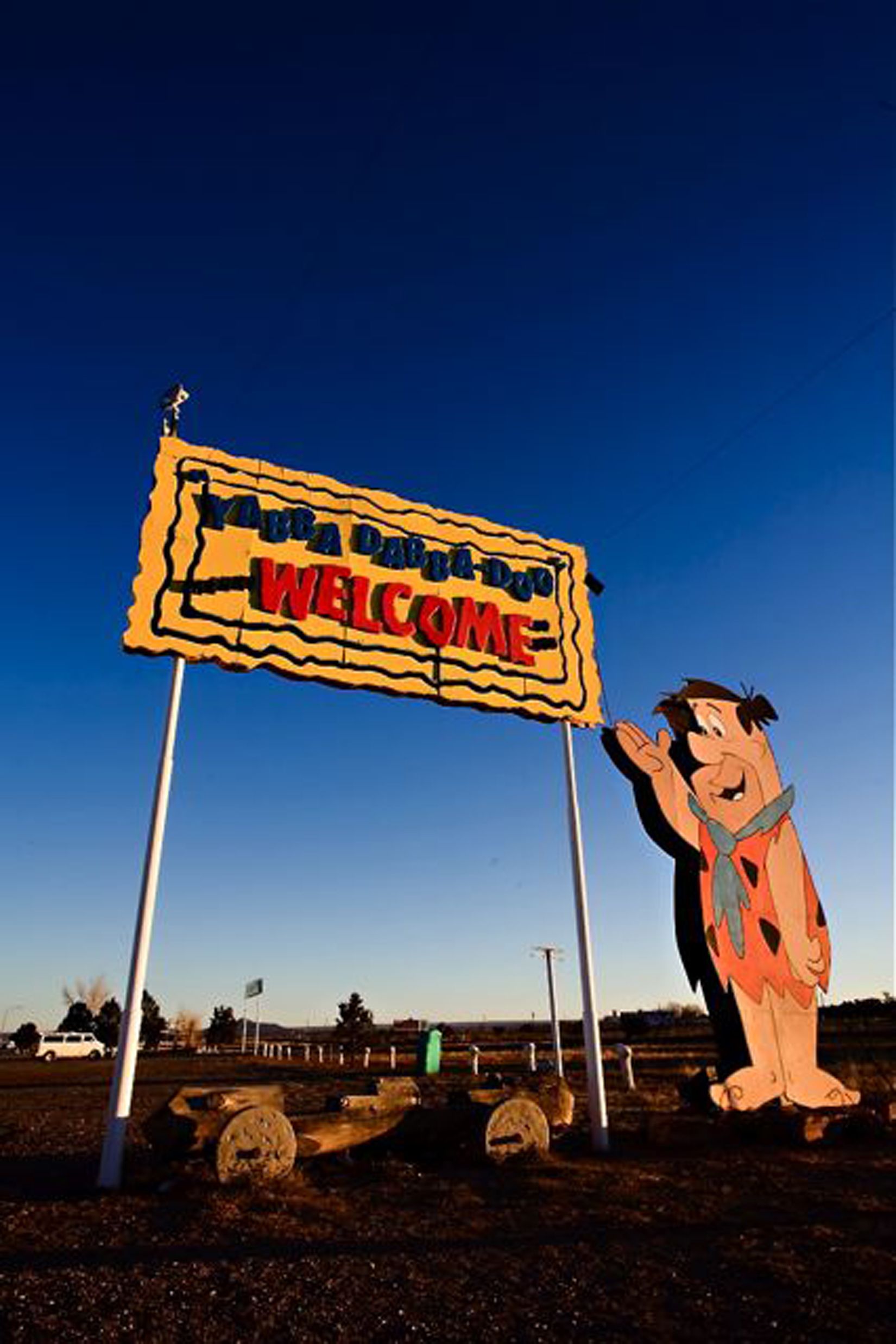 Home to one of the biggest donuts in America, Randy’s Donuts Shop is located just outside of Los Angeles, CA in the El Segundo neighborhood off of the 405 freeway. Opened in 1953, Randy’s is now considered a historic landmark that is not only a must-see for its giant rooftop donut sculpture, but also for its delicious, fresh donuts served 24 hours a day (walk up or drive through). The historic landmark has also made appearance in a slew of Hollywood films and television series, including Iron Man II and Entourage. It’s located about ten minutes away from LAX airport, so next time you’re in the city make sure to stop by for a picture and one of their famous apple fritters. Stay at the nearby Belamar Hotel in adjacent Manhattan Beach for the ultimate beachy, Los Angeles vacation. 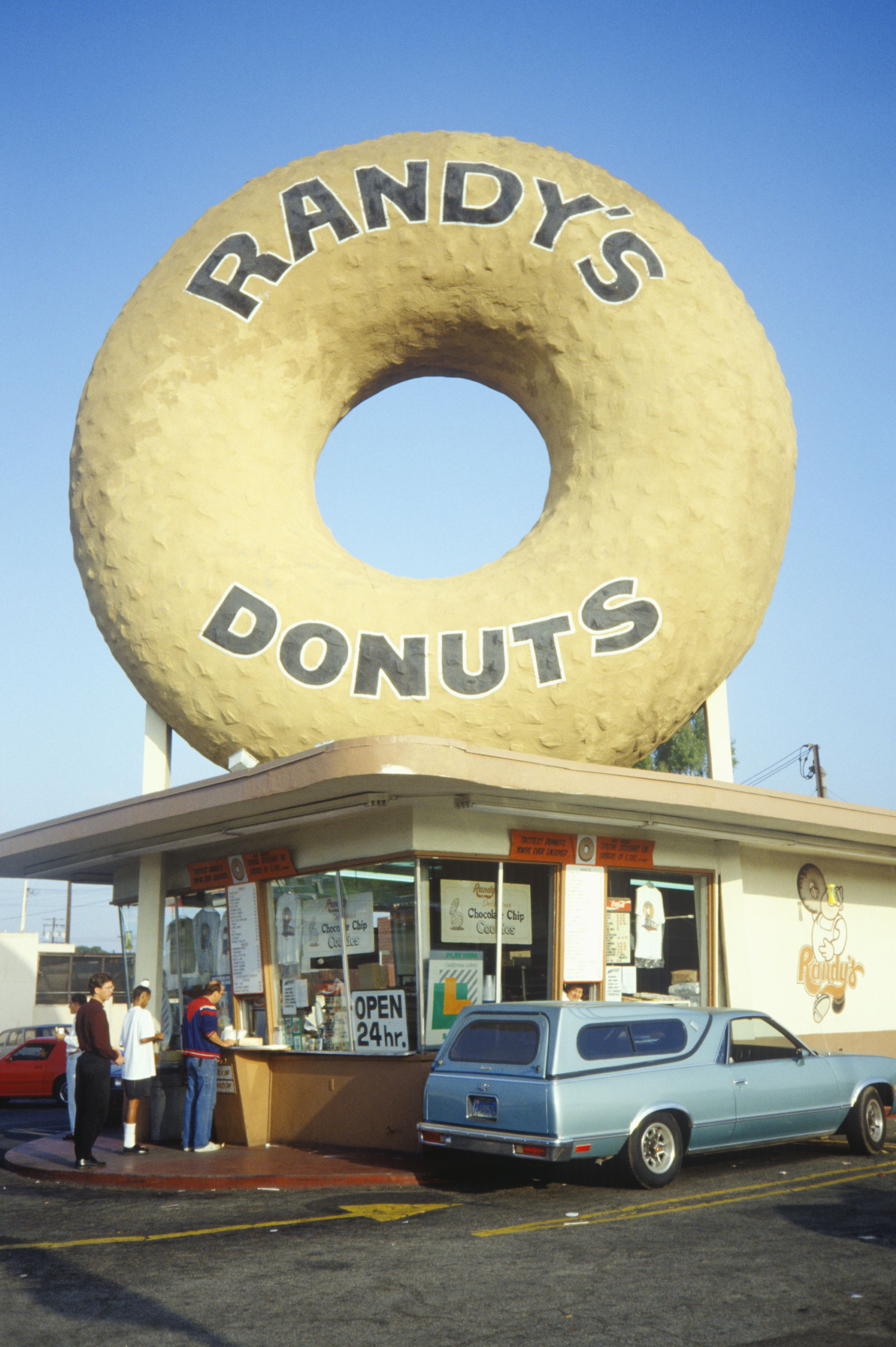 Spanning across over 10 acres of land, Porter’s Sculpture Park in Montrose, SD (about 25 miles away from Sioux Falls) is situated along the side of road, featuring over 50 gigantic sculptures erected by artist Wayne Porter. Unlike many art installations and site specific works of art, you can actually touch–and climb–these larger-than-life creations, making it a great destination when bringing the kids along. Some of the standout pieces in the collection include the infamous 60 ft. bull and the cryptic meditating monks metal sculptures that seems to guard the entry way. Stay in the charming AmericInn hotel, situated just 11 miles from the park. 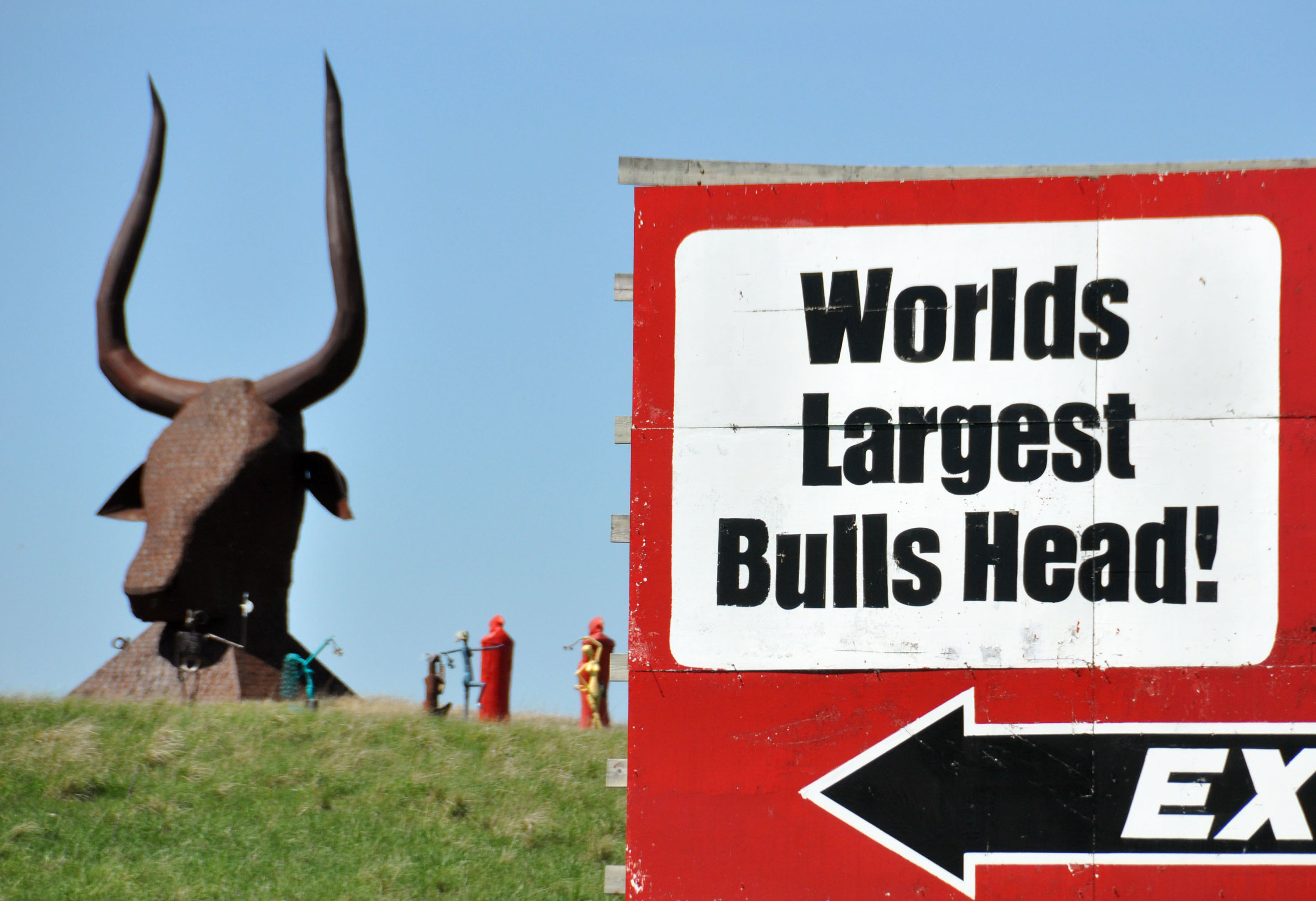 The Enchanted Highway is a 32-mile stretch of land scattered with 7 sculptural scenes along the I-94 highway in western North Dakota. Composed of primarily scrap metal, each of the impressively detailed installations face Northbound so that on-coming traffic from the highway can see each one clearly. Each of the seven is also positioned next to a freeway exit with a parking lot, so passersby can easily pull over to enjoy the works up close. Stay in town at one of the area’s best hotels, Astoria Hotel and Event Center. 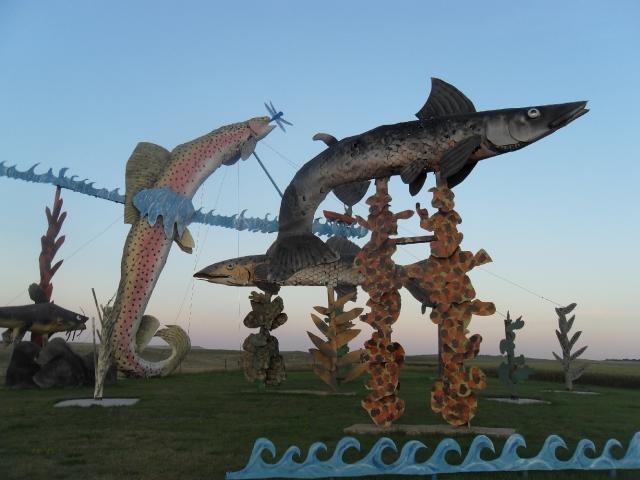 Nevada’s state highway 395 has adopted the synonym, Extraterrestrial Highway over the years. The highway eventually takes you to the surrounding area that borders the intensely secured military base, Area 51, just outside Roswell, NM. Garnering ample conspiracy theories related to alleged UFO activity connected to site, the highway has become sprinkled with extra-terrestrial stops and alien-themed businesses to help keep tourists entertained and excited through the long drive to Roswell. The Alien Research Center features a giant, silver alien sculpture outside of a metal dome-shaped building. Inside, you’ll find an expansive selection of UFO paraphernalia and alien-themed gifts. Take a break from the drive in the cozy Pine Tree Inn & Bakery Bed & Breakfast in Panaca, NV. 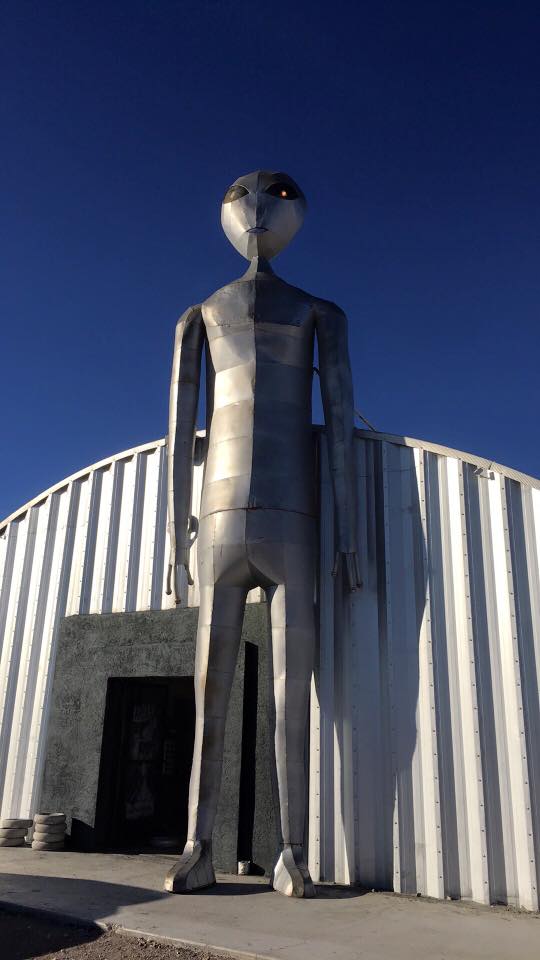 The gigantic Cabazon Dinosaurs (named Dinny the Dinosaurs and Mr. Rex, apparently) are situated just west of Palm Springs, CA next to a truck stop off the highway. The two statues were originally constructed in the early 1960s by Knotts Berry Farm theme park sculptor, Claude K. Bell in efforts to attract travelers in to stop at the Wheel Barrow Restaurant, which closed in 2013. After Bell’s death in 1988, the property was sold and MKA Cabazon Partnership became the owners. Under new ownership, the attractions became accompanied by a gift shop and creationist museum. Whether you’re interested in the museum or not, these legendary dinos (famously displayed in Tim Burton’s Pee Wee’s Big Adventure) are one of California’s best examples of novelty architecture. Continue on to Palm Springs and shack up at the luxe Colony Palms. 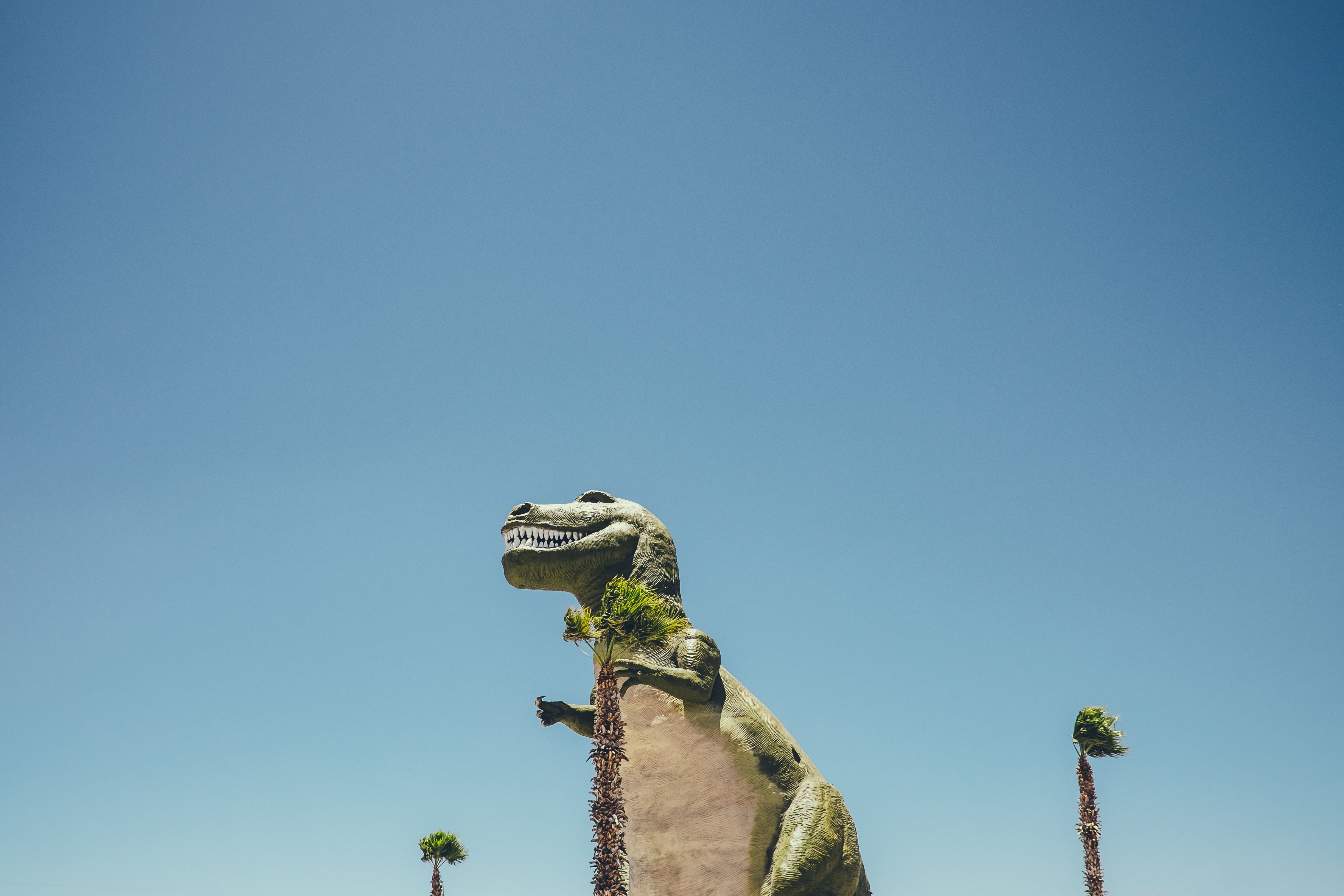