* America is the home to some of the best themed hotels in the world
* Stay somewhere out of the box for your next vacation
* Whether you’re a sci-fi fan or art lover, our list has the place for you

If you’re planning a domestic vacation and want to stay somewhere a little bit different than your standard hotel, read on for the best themed hotels across the country, for a lodging experience you’ll never forget.

Add Comment
1 Person Commenting
Ron Ablang
4 years
Wouldn't be nice to see each of these on a map of the United States so you...

Located 15 minutes south of downtown Indianapolis, this eclectic hotel looks pretty unassuming from the outside, but step into one of their 20 themed suites, and you’ll see that this hotel has some pretty stellar accommodations. Notable themed-suites include the “Space Odyssey” (pictured below), “Alien Invasion,” “Cinderella,” and “Casino Royale.” Each elaborately decorated room is outfitted to look like a movie set, for a lodging experience that you will surely never forget. Despite the kitschy interior, each suite is well equipped with luxury amenities to keep you comfortable and feeling at home–despite the otherworldly setting. 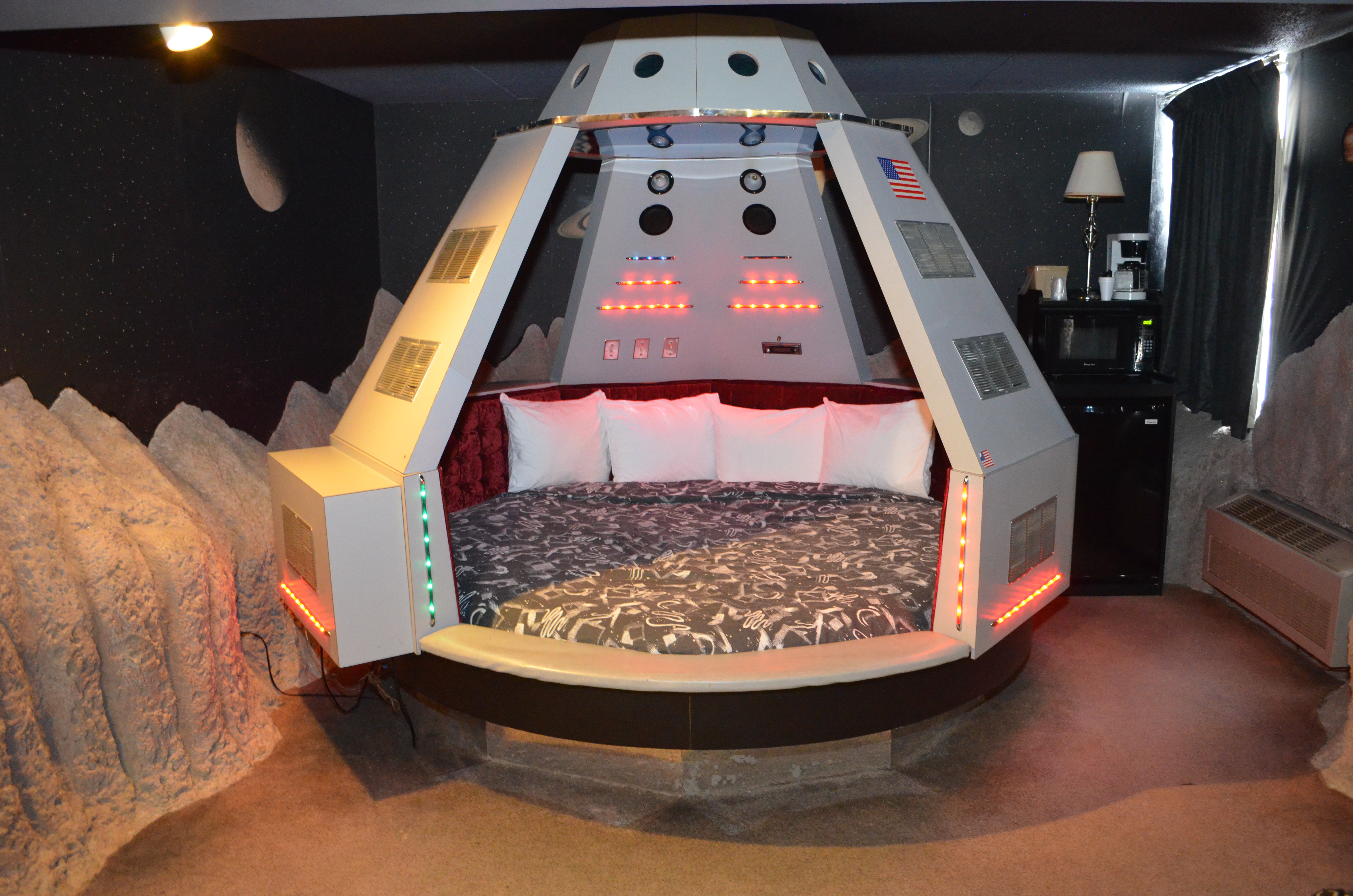 Art museum or hotel? The line is blurred at this upscale hotel chain that functions as both. With locations in Nashville, Lexington, Durham, Kansas City, Oklahoma City and more, this chic hotel maintains its artistically flavored boutique appeal, while still remaining accessible to accommodate those travelling throughout America. Each hotel location has a permanent collection of works, as well as a rotating exhibition curated with a variety of themes that feature both established and up and coming artists from across the globe. Our favorite 21c location is the Cincinnati, OH branch, which has a lobby filled with contemporary art pieces spanning across a wide variety of art genres and mediums. Some of the most well-known pieces in their collection include photographs from Chuck Close along with mixed media works by Andreas Serrano. 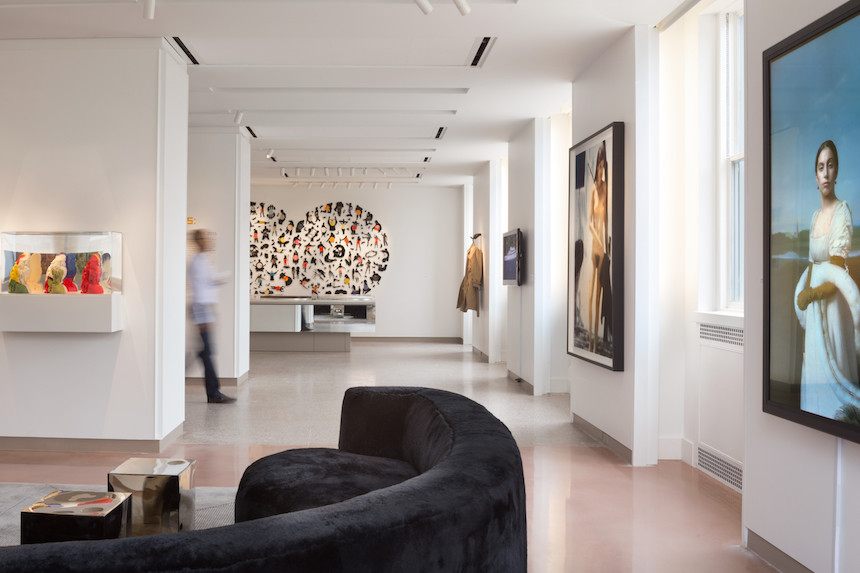 This Tonopah, NV joint may or may not be haunted, but it certainly wins for most offbeat and kitschy hotel of the list. Located in a small mining town between Las Vegas and Reno, the campy motel’s fright factor is amplified by its neighboring proximity to the historic (and unlit) Old Miner’s Cemetery. Despite its unsettling surroundings, the current owner adamantly insists that the actual motel is not haunted. It is, however, home to over 600 clowns–in the form of images and figurines, to be clear, but those with coulrophobia (fear of clowns) can be somewhat soothed, as the motel will gladly remove clown imagery from the room upon request–though you’ll have to shut your eyes in the clown-infested lobby. A recent study suggested that Americans are more afraid of clowns than climate change, so this desert motel will test your courage for both phobias.

While this hotel doesn’t fit neatly into the “themed hotel,” category, its grand stature and pop culture connection make it an apt inclusion on our list. This hotel is the site responsible for inspiring Stanley Kubrick’s iconic film adaptation of Stephen King’s, The Shining.  Apparently, after Kubrick and his wife stayed at the hotel in room 217 (still the most requested guest room today) the iconic film director was convinced the hotel was haunted, and eventually lead to his conception of the classic thriller. And despite its significance in the film canon, this stately hotel is packed with both historic charm and modern amenities for the ultimate lodging experience when visiting the Rocky Mountains. The grand hotel opened back in 1909 and has been rumored to be haunted. Despite the otherworldly rumors, staying at the hotel comes with a handful of complimentary perks including in-room hot tubs, ghost-themed tours, continental breakfast and stunning mountain views. 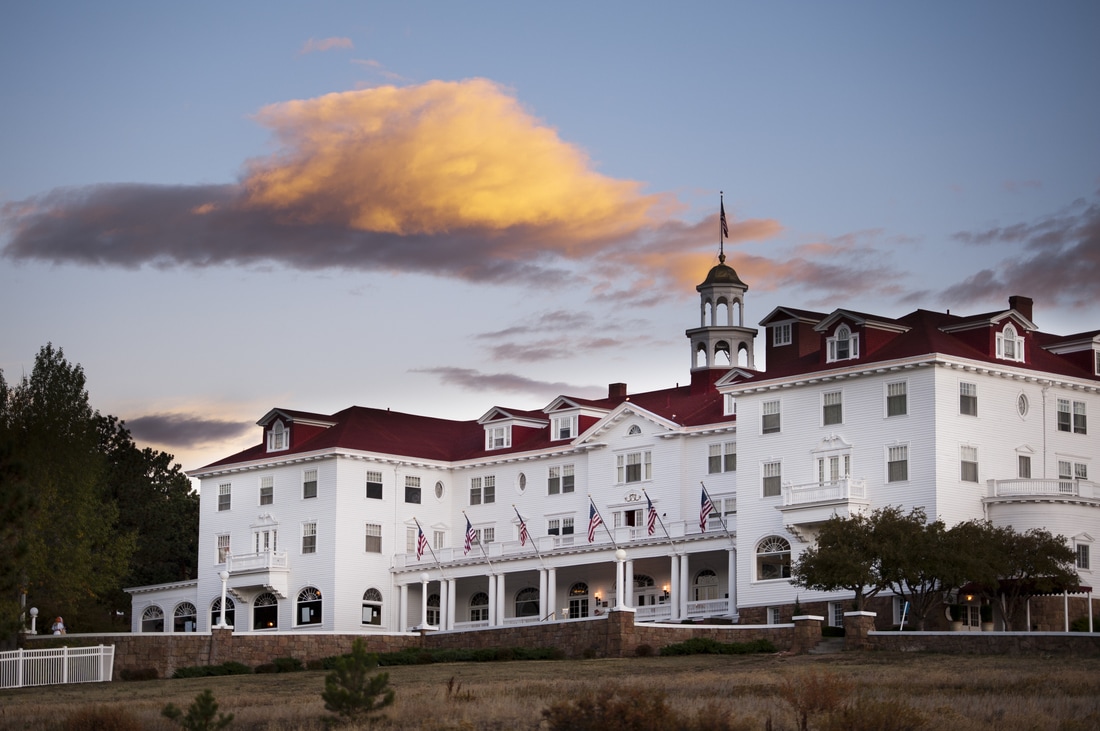 Located in Cottonwood, ID, this beagle-shaped hotel has become recognized as one of America’s best roadside attractions and a cultural landmark for the state. This “mom and pop” shop is actually owned by a husband and wife (both artists) who opened the inn in 1997. The Dog Bark Park offers guests a truly nostalgic experience, designed to help you enjoy the simpler things in life. Instead of the televisions and high-tech computer, the inn is stocked with a variety of cards and board games for your entertainment–though WiFi is now enabled in the hotel. Naturally, this inn is pet-friendly for a small additional fee. 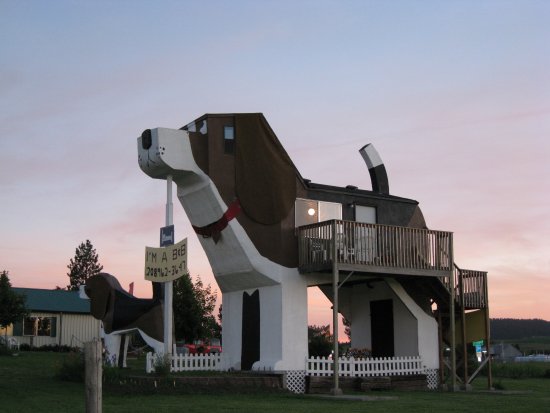 If you should ever find yourself near the coast of Central California, The Madonna Inn is a legendary landmark not to be missed. The hotel’s over-the-top style is slightly campy, with an underlying western-romantic aesthetic dressed up with opulent baroque and rococo-fashioned ornamentation. The landmark hotel was opened in 1958 by Alex Madonna and his wife, Phyllis. Each of the 110 guest rooms and suites are uniquely designed and themed–most colored in various gradients of pink with gilded mirrors, lush floral arrangements and plenty of velvet. Sensory overload has never been so delightful than at the Madonna, with its eclectic interior constantly teetering between decadent plush and downright gaudy. The Madonna Inn’s most famous guest suites include the beloved Caveman Suite and the Barbie Dreamhouse doppelgänger, the Floral Fantasy room. Other unique elements include the hotel’s notorious waterfall urinal and a pink colored tennis court. 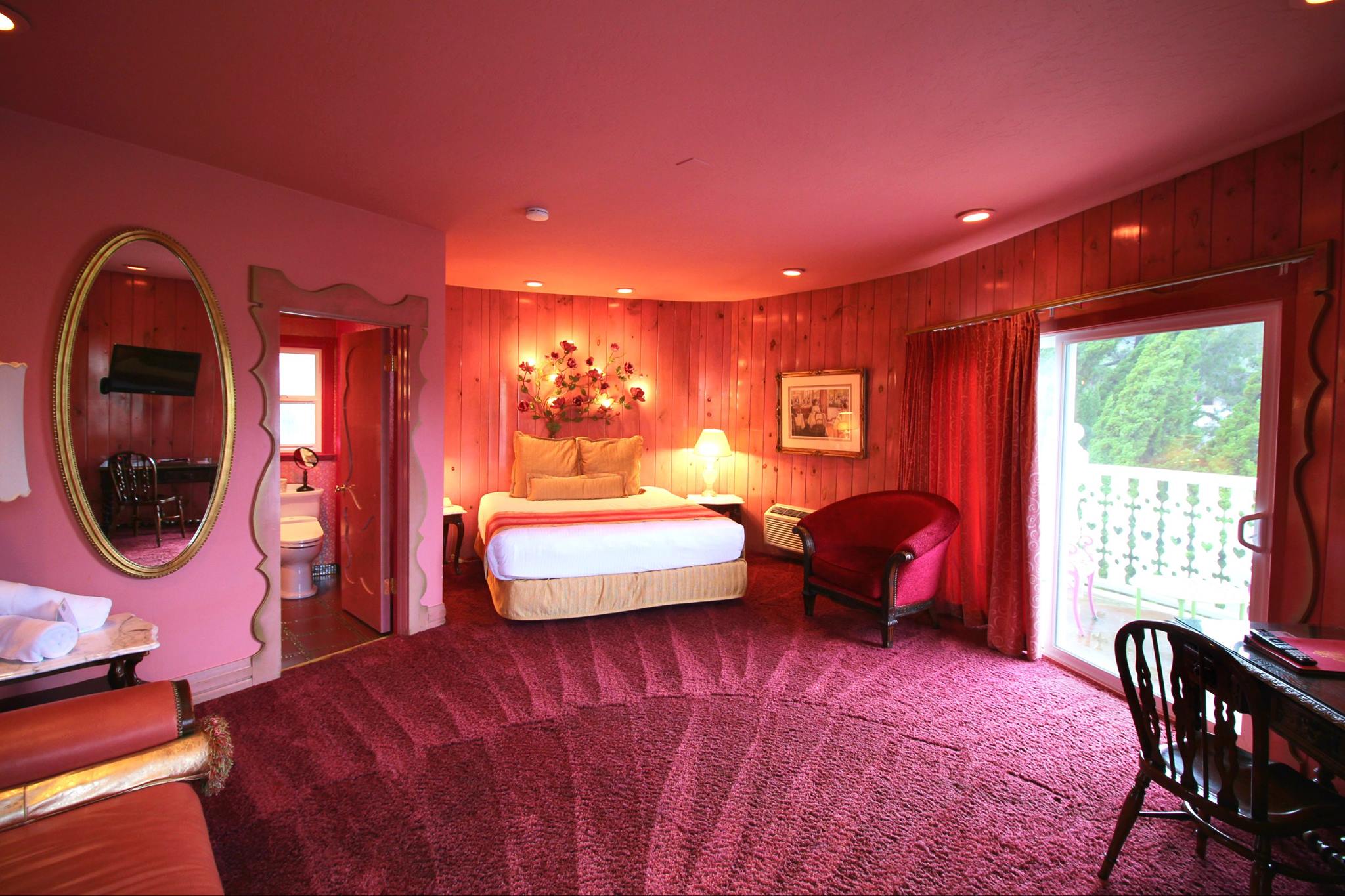 This palatial hotel accompanies the second Legoland Amusement park in Winter Haven, FL. This medieval LEGO castle is even guarded with mystical dragons and guards–all rendered with LEGO’s signature bold color scheme. Its pseudo-medieval facade fortifies its fun-filled interior, which houses an over-sized pool, restaurants and dozens of kid-zones. Fully-themed guest rooms include upgraded amenities like an in-room mini fridge, LEGO bricks to play and build with in your room, a king size bed for the adults in the party and a separate sleeping area for the kiddos, complete with an entertainment center, bunk bed and pull out trundle. Other hotel perks include a welcome treasure hunt for guests upon arrival and for those attending the amusement park, early access to the rides. 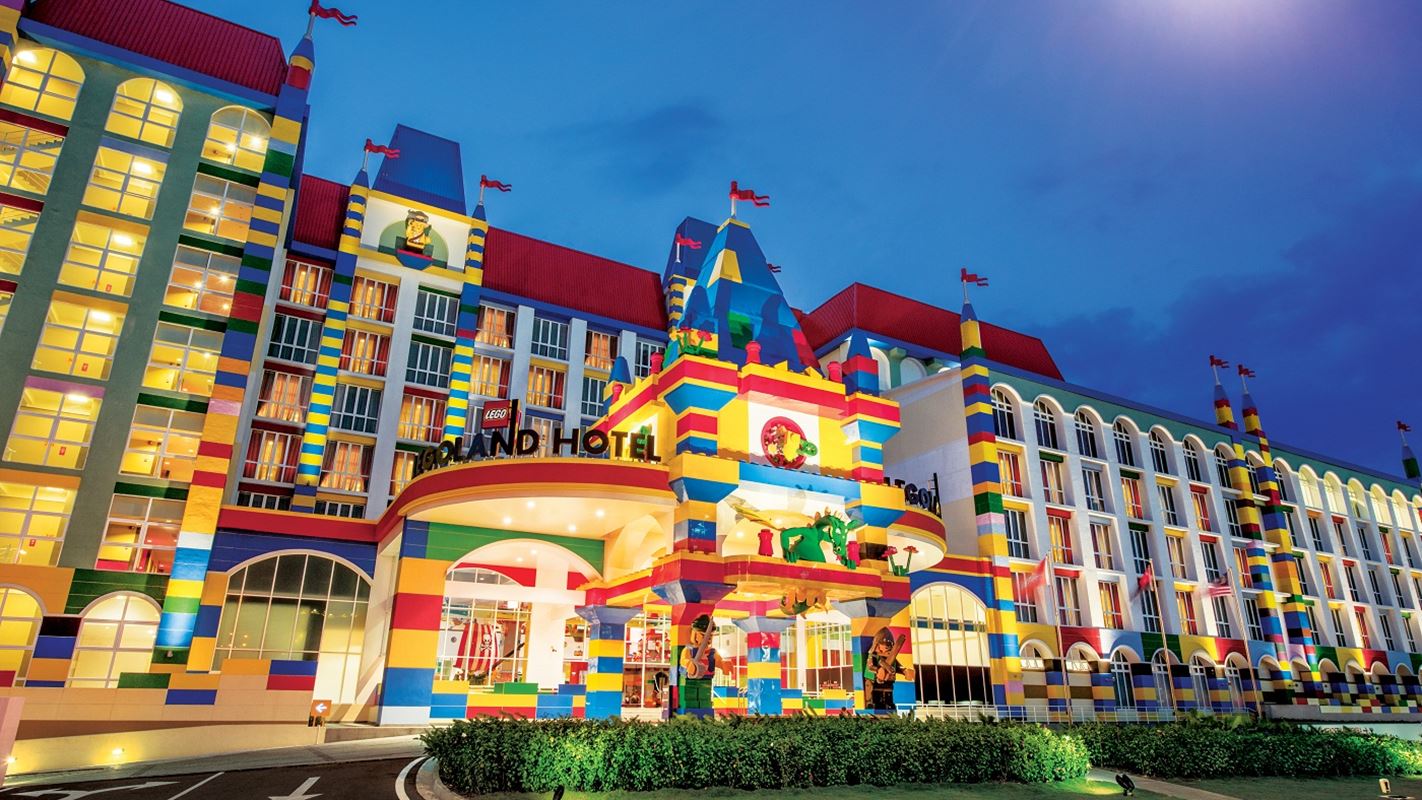 Contemporary art lovers will love this unique hotel in Manhattan’s Uptown district. Each of the guest rooms are curated by up and coming contemporary artists, with mural paintings on the wall, reliefs and other ornamental decor curated by the participating artist. The century-old hotel has functioned as number of institutions throughout its colored history–including operating as a boarding house and later as a prostitution hub. In the 1980s, writer and construction worker Ed Ryan reinvented the space as a hotel, inviting artists around the world to leave their imprint on the room in exchange for free lodging while staying in the city. One of the most well-known artists to leave their mark at the Carlson Arm is the notoriously secretive street artist Banksy, who stayed at the hotel in his early career and painted a mural on the stair case and in room b5 in 1999. 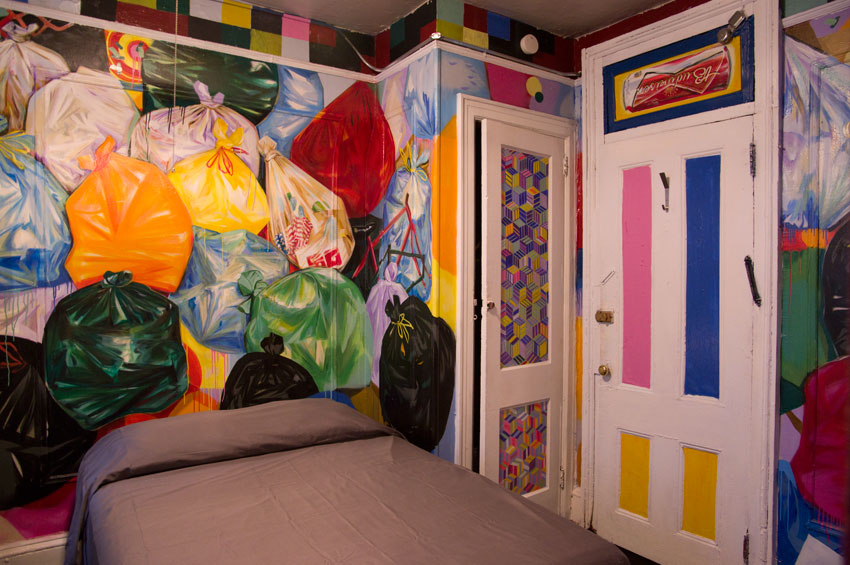 Located just 10 minutes away from downtown Portland, this converted 1915 elementary school is a trip back in time. However, you won’t get busted for drinking or falling asleep in class here. And despite the decision to keep the school’s original decorum, this detention-free facility will even allow you to have a cocktail and a cigar in what was once the principal’s office, enjoy a pint of craft beer from their in-house brewery, or watch an R-rated movie in their old school auditorium. Each of the 57 guest rooms are themed according to the scholastic style. Some of the rooms even have antique classroom phones and chalkboards, while others are furnished with an author’s theme, equipped with old-fashioned classic books and original lithographs. 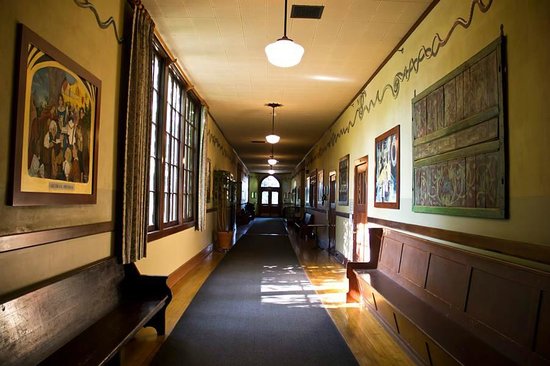 This unlikely lodge offers guests a truly unique lodging experience with a variety of 1o different train cabooses, each designed and decorated according to a specific theme or modeled after a Hollywood film. Some of the most popular “rooms,” include the Casablanca Caboose, The Easy Rider Caboose, and The Wine Country Caboose. Each cozy caboose suite feels homey and intimate, but thanks to the outdoor surrounding (in Northern California’s wine country, adjacent to the Clear Lake) the space never feels cramped. 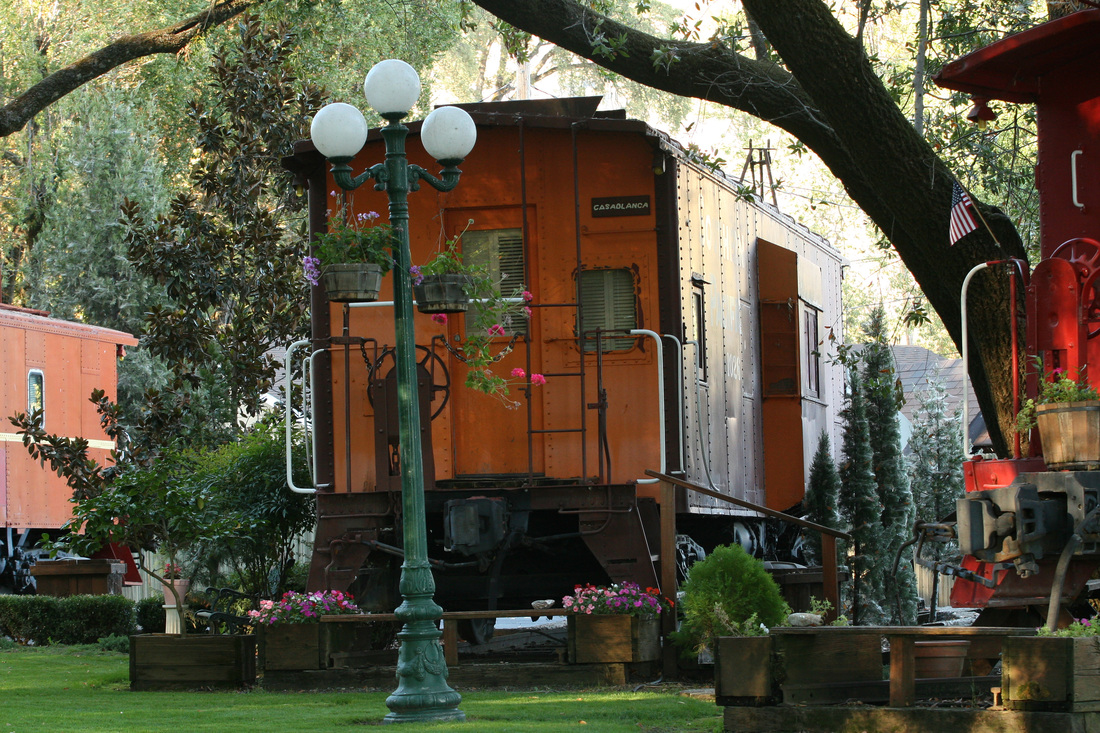 Buy Now
If you buy something because we told you about it, we may receive compensation from retail partners.