Located on Austin’s most famous street, the South Congress Hotel is a boutique hotel located in the heart of Austin, Texas’s iconic shopping, dining and entertainment district. As one of the preeminent hotels in the Austin area, you are guaranteed a good time and probably a celeb-sighting or two to boot.

If you choose to go during the uber popular SXSW festival or one of the many other hosted musical events, you may run into the likes of Jack Black at their restaurant café. Celebrities flock to this hotel due for its premium amenities, including a BMW X5 House car service, bike and motorcycle rental service and it’s Otoko restaurant, which has some of the hardest seats to snag in town. Las Vegas is a hotbed of celebrity sightings. Anyone who is anyone has experienced the allure of Sin City and lived to tell the tale. As one of the ultimate luxury resorts in the heart of The Strip, The Mandarin Oriental hotel is the triple recipient of three 5 Star awards from Forbes magazine for the hotel, spa and signature restaurant. Lucy Liu, Geoffrey Rush and Morgan Freemen are just a few celebrity guests who have enjoyed the luxury and serenity this hotel has to offer. The beachfront Fontainebleau Hotel in Miami is known for its fabulous lobby and opulent décor. It’s the original art deco hotspot where the Rat Pack and Elizabeth Taylor partied until the early hours. Their epic nightclub LIV is known throughout Miami as THE place to go for sightings, an epic light show, world class DJs and all the beautiful people. Leonardo DiCaprio is known to have splurged on a VIP table with bottle service. 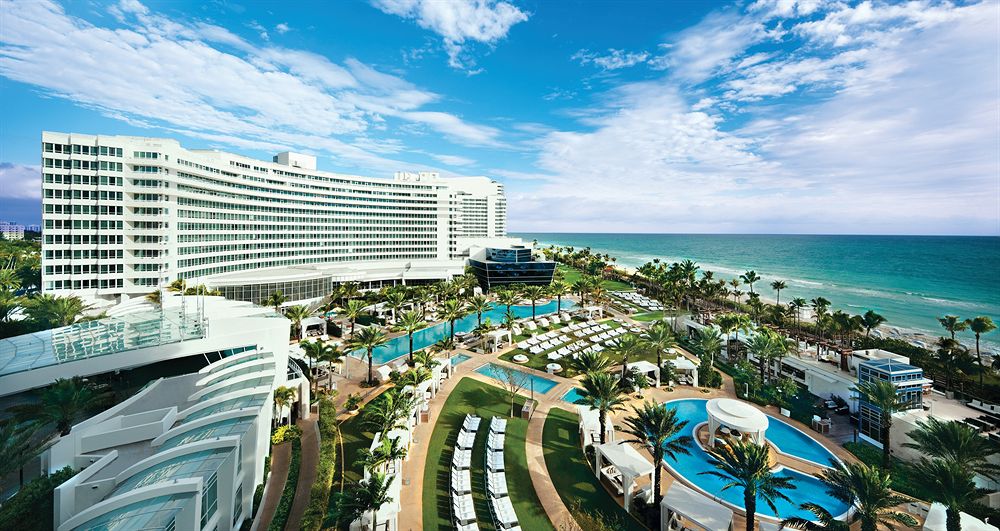 The Gansevoort Park Avenue Hotel is located in a prime New York City’s Meatpacking District. Known for its indoor/outdoor heated pool, guests can enjoy a dip year round, especially during New York Fashion Week. Whether it’s for the September or February shows, the pool is a hot spot for celebrities. Complete with a sexy pin-up girl mosaic at the bottom of the pool, celebs such as Rihanna, Brad Pitt and Angelina Jolie have been spotted at this hot hotel. The attached Gansevoort Park Rooftop is another popular celebrity hangout. One of West Hollywood’s most recognized architectural landmarks, The Sunset Tower Hotel has just revealed they may be up for sale at a staggering $100 million. Long a gathering spot for extra-private celebs such as Jennifer Aniston, Johnny Depp and Sean Penn, the famous (or infamous) Tower Bar was the site of Vanity Fair’s Oscar Party several years in a row. Once news of the potential sale was announced, the Tower Bar and hotel were busier than ever, hosting the likes of Andy Cohen, John Mayer and Gwyneth Paltrow. Known as the crown jewel of luxury hotels in the Buckhead area of Atlanta, The St. Regis stands out as a true luxury resort. Their AAA Five Diamond boutique hotel, 31 suites exclusively enhanced with signature St. Regis Butler service, along with their impeccable all around service make it the ideal place for a celebrity sighting. Jennifer Aniston was seen pulling up to this hotel, and Chris Evans stayed there too. Our last luxury hotel pick is the Four Seasons Hotel in Toronto. Located in the heart of Toronto’s exclusive Yorkville neighborhood, this hotel has all the amenities you have come to expect from the Four Seasons. With a “Royal Suite” located on the hotel’s top level, this accommodation is sutiable for any member of Hollywood royalty and their entourage. An in-room iPad allows access to all Four Seasons services so guests can take advantage of all they have to offer at any time. Woody Harrelson, Harvey Weinstein and Bruce Springsteen have all been spotted enjoying a drink at their bar. One person you won’t see is Jaden Smith, who set off a Twitter firestorm in May when he claimed the hotel “spiked” his pancakes with cheese.