Ninety miles east of San Francisco is Sacramento, a small city that’s often overlooked despite its massive historical and political importance. Sacramento is significant not only for its current role as the state capital, but also for its historical importance to the Gold Rush. San Francisco somewhat unfairly tends to be the focus of stories about the Gold Rush. And while SF played a tremendous role as the port city that thousands of eager miners from across the world flocked to and staked their claims in, gold was first discovered near Sacramento.

Sacramento is where the Gold Rush blossomed, and where John Sutter, the man who owned the mill where gold was found, first settled. Lest you think historical wonders would be Sacramento’s only draw, vibrant restaurants, bars, and cafes abound, and the eminently walkable downtown area hosts arts destinations like The Crocker Art Museum and The Community Center Theater. Here’s how to spend a weekend in California’s charming capital city.

Add Comment
1 Person Commenting
Jesper, The Biveros
3 years
We are considering a stop in Sacramento on our trip to San Francisco later this year, so...

In the heart of the downtown area is The Citizen hotel. It’s part of Marriott’s Autograph collection, a group of boutique hotels that are thoughtfully decorated to create an immersive experience that’s in sync in with the cities they’re in. The Citizen evokes Sacramento’s architectural and political history; it’s situated in California’s first skyscraper, giving it a stately feeling despite its relative newness.

Add Comment
1 Person Commenting
Jesper, The Biveros
3 years
We are considering a stop in Sacramento on our trip to San Francisco later this year, so… 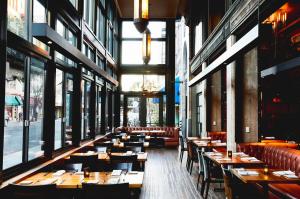 The walls are adorned with old political cartoons, photos from protests, and quotes from American political figures. Even minor details like elevator design are considered. The lobby elevators feature art-deco inspired panels with light-up floor indicators, adding to the old-world feeling that so much of Sacramento embodies. Within the book-adorned lobby is Grange, a bar and restaurant that’s quite a few steps up from your standard hotel buffet. Grange features custom cocktails and eclectic eats like Alaskan halibut and tempura wax beans. 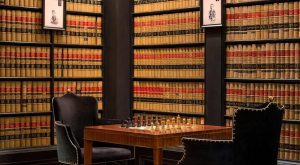 See Rates and Reviews For The Citizen Hotel

Old Sacramento and downtown Sacramento feel like they’re centuries apart, but in reality, they’re a short walking distance from each other. Old Sacramento is paved with cobblestone and lined with old west buildings. It sits on the waterfront, and there are steam-powered boats and trains nearby. Various historical treats include the underground tour, a look at the underbelly of old Sacramento before it was lifted up due to flooding. Old Sacramento is a great place to take kids, but honestly, it’s pretty exciting if you’re an adult, too. 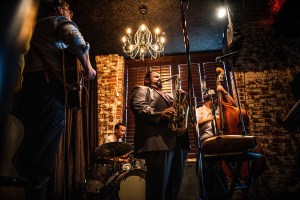 Downtown Sacramento, by comparison, features lively watering holes like the speakeasy-inspired Shady Lady Saloon and Dive Bar, an aptly named spot where women dressed as mermaids swim above the bar. There are hip cafes like Temple Coffee Roasters, which has several locations throughout the downtown area.

There are still plenty of adventures for the historically-inclined in downtown Sacramento, though. I went on a free tour of the state capitol, which has stunning architecture and plenty of unique oddities. Sutter’s Fort is in downtown as well; it was where John Sutter first settled, and it’s where the rescue party of the Donner party set out from.  For something that blends history with the modern day, visit the Crocker Art Museum. Its collection is housed in two buildings: one is a grand old mansion and the other is a strikingly contemporary building. Naturally, their collection spans historical and contemporary California art. 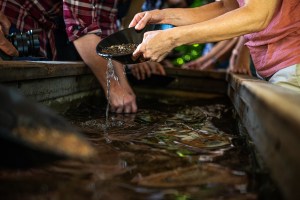 Trying to strike it rich while panning for gold. Photo by Darcy Bacha for Chevrolet Darcy Bacha/Chevrolet

No trip to Sacramento is complete without visiting Coloma. It’s roughly 50 miles from Sacramento, and it’s the site where California gold was first discovered. Friendly guides will fill you in on all the aspects of the fascinating story of how the Gold Rush happened.

For a classy and stylish but unfussy dining experience, check out Cafeteria 15L. They feature American classics like burgers and French dip, as well as seafood options like shrimp scampi and grilled Atlantic salmon. It has a chic interior and a cozy outdoor dining patio. I was in the mood for something casual and familiar, so while in downtown I hit up the affordable Greek eatery, Crest Cafe. They have filling pita wraps, shawarma, and light salads. They also do a popular twist on American food with fries and nachos that are loaded with Mediterranean staples like feta cheese and chicken shawarma. 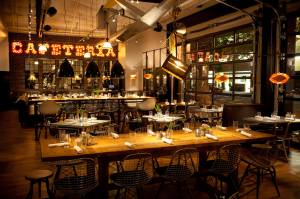 If you’re looking for a sophisticated dinner, check out Ella Dining Room and Bar. It’s a modern take on the white tablecloth restaurant, swapping actual tablecloth for natural wood and floral table settings. Their seafood-heavy offerings include scallops, oysters, as well as a dish called siete mares (Spanish for seven seas) that features lobster, cod, shrimp, and squid. If you prefer turf to surf, Ella also has New York strip steak and duck breast.

Sacramento’s history as the epicenter of the Gold Rush drove innovation in the modes of transportation to the West Coast. The trains and steamboats that were historically used to transport gold are still on display in historic old town, and the famed but short-lived Pony Express had Sacramento as its final stop. People fiercely innovated during this time, and it’s fitting to have an innovative car to get around. While you’re exploring the past of California, embrace its future by driving an electric car. I took a spin in the all-electric Chevy Bolt EV. 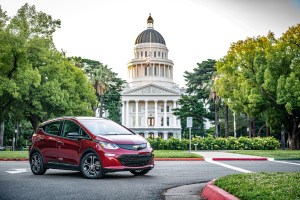 The Bolt EV (not to be confused with the sadly discontinued Volt) has a 238-mile range, and it has pretty fierce acceleration. And, while a car like the Tesla is no doubt impressive, the Bolt EV costs roughly the same as the economy Model S, without the waiting lists. I drove the Bolt EV from Sacramento to Coloma, which is a roughly 50-mile trek on highways, city streets, and curvy canyon roads. One of the most impressive features, on any kind of road, is regenerative braking. While in regenerative braking mode, the car can be driven using only the accelerator. Gently lift your foot off the pedal, and the car will come to a smooth stop. This action helps recharge the battery as well, which means you can go for a quick jaunt around town without even depleting your battery. Sacramento is a great place to drive the Bolt EV, too, because it has a multitude of publicly available charging stations.

In terms of comfort and convenience, the Bolt EV actually functions surprisingly well as a road trip car. There’s spacious seating for up to five people, tons of leg room to stretch out in, and impressive trunk space for a compact car. Tech-wise, I loved the 10-inch touchscreen, USB ports for charging my phone, and the 4G LTE WiFi capabilities. And with ten airbags and Chevy’s “StabiliTrak” electronic stability control system with traction control (which detects wheel slippage and applies brake pressure and/or reduces engine power to help the driver maintain control), I felt safe the whole drive too.

For my first trip there since I was kid, I found that Sacramento was keen on offering the unexpected. It’s both historical but lively, and it has a powerful stature but a small-town feel. Sacramento is a little less than a hundred miles from SF and a little more than a hundred miles from Tahoe. So, for a quick weekend away in one of California’s most significant cities, consider checking out the adventures that Sacramento has to offer.

The Best Weekend Getaways To Explore This Summer