Cinnamon is typically thought of as a spice that adds sweetness to desserts and side dishes and has an inviting aroma that makes it perfect for candles and body lotions. The second most popular spice behind pepper in the US and Europe, cinnamon can be found in several dishes, from meat-based stews to hot chocolate mix. But cinnamon is much more than a garnish for your latte. It has health benefits that date back thousands of years and continues to help people with a variety of conditions and ailments. So, enjoy that latte and know that you are getting added benefits along with your daily caffeine kick.

When looking at the health benefits of cinnamon, we should start at the basic level. Cinnamon is harvested from the bark of tropical plants from the genus Cinnamomum. Cinnamon’s inviting flavor and aroma comes from its essential oil component, known as cinnamaldehyde, as well as constituents like eugenol.

True cinnamon or Cinnamomum Verum/Ceylon is typically grown in India, Sri Lanka, Bangladesh and Myanmar. Cinnamomum cassia is native to China and is grown in warm climates. Cassia is the cinnamon that most people are familiar with. It has a reddish-brown coloring and is used for baking and has a sweet and spicy flavor. As for Ceylon cinnamon, it has a lighter brown hue than cassia and is typically sold in cinnamon stick form because of its crumbly nature.

As for the exact health benefits of cinnamon, there are many.

Cinnamon Has a High Antioxidant Level

Cinnamon has a high antioxidant level thanks in large part to its inclusion of polyphenols. It ranks among one of the highest in antioxidant levels of spices, even higher than garlic and oregano. Antioxidants protect cells against free radicals, which can help ward off heart disease and cancer.

Past studies have shown that cinnamon may have a positive effect on people with type-2 diabetes, helping to lower their sugar level by adding only 1 teaspoon of cinnamon to their daily diet. It should be noted that people with diabetes should continue taking their medication and monitoring their glucose levels, as well as seek professional advice before making any drastic changes to their diets.

Some studies have found that adding cinnamon to one’s daily diet can help to reduce bad LDL cholesterol and triglycerides without impacting good cholesterol. In turn, this can help prevent heart disease.

Cinnamon has properties that help to rid the body of waste products and in turn keep the cells healthy, which has anti-inflammatory benefits. Those who suffer from chronic inflammation, like arthritis, may want to try adding a small amount of cinnamon into their daily diet. Because of these anti-inflammatory properties, cinnamon is also currently being studied to see whether it has a positive effect on those suffering from Alzheimer’s or other forms of dementia.

The benefits of cinnamon are still being explored by health experts and have shown promising results. Cinnamon has been used in studies to determine whether it can help prevent HIV and prevent multiple sclerosis. Both areas are still being studied in response to their connection to HIV and MS, but it’s exciting to think that a natural spice could help protect people against major health issues.

While there are several health benefits to cinnamon, it’s important to exercise caution when introducing a regular cinnamon routine into a person’s diet, whether that’s in supplement form, powders, sticks or liquid drops. Cassia cinnamon, which is the more inexpensive option and the one typically found in food products that contain cinnamon, can cause health problems if ingested in large quantities because of a compound called coumarin. As with any dietary supplement or new health regime, it’s always advised to keep things in moderation and consult a physician before making a regular change to your diet.

The Best Cinnamon Products for Consumption

From supplements to sticks, powder to liquid drops, there are several ways to incorporate cinnamon into your life. Check out some of our top picks for the best cinnamon products below.

NutriFlair uses Ceylon cinnamon, which is the more expensive alternative to cassia cinnamon and has fewer health risks when used in high doses. Made with pure and organic Ceylon cinnamon, the supplement may help promote healthy blood sugar levels and has anti-inflammatory properties, which can be beneficial for those suffering from joint issues. The supplement is free from GMOs and is both vegan and gluten-free.

Cinnamon is becoming an increasingly popular spice to use in supplements, but with all supplements, it’s important to exercise caution and consult your doctor before starting a program. If you want to start incorporating cinnamon into your daily routine, the Cinnamon by Nature’s Bounty supplement is one of the easiest ways to do so. The capsules can be ingested whole or they can be opened and the contents can be added as flavoring to food or drinks. The supplement uses Cinnamomum burmannii and chromium to help support healthy sugar metabolism and regulate blood sugar after a heavy meal. It also has some anti-inflammation properties. 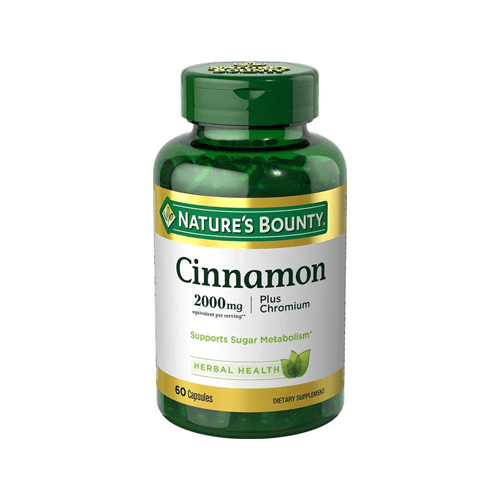 If you are concerned about the high levels of cinnamon in pure cinnamon supplements, there is also the option of using a supplement that contains several natural ingredients in addition to cinnamon. The Vimerson Health Supplement combines cinnamon with turmeric, saffron, and cardamom to create a product that may help with inflammation, balancing blood sugar levels, and improving joint pain. The supplement is also high in vitamin C, potassium, and vitamin B, which can help to improve eye health. Vimerson Health uses Ceylon cinnamon, which is safer when ingested in large quantities compared to Cassia cinnamon. 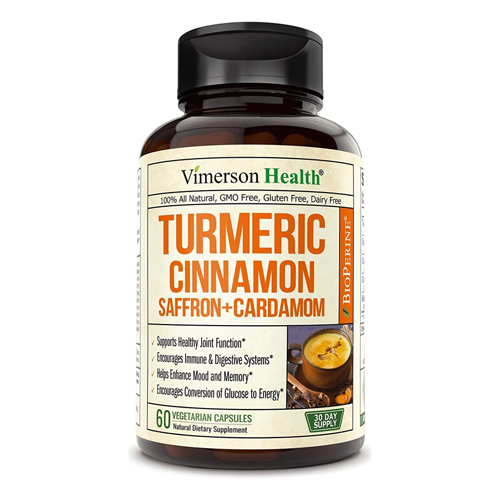 If you like to put cinnamon on every dish you make, then you need a five-pound bag of HQOExpress’ organic ground cinnamon. Certified organic, kosher, gluten-free, and sustainably grown without the use of herbicides or pesticides, HQOExpress makes one of the purest forms of cinnamon that is also delicious to eat. With a spicy, sweet, and sharp profile, this cinnamon is perfect for adding to shakes, hot drinks, baked goods, and any other foods that can use some added flavoring. 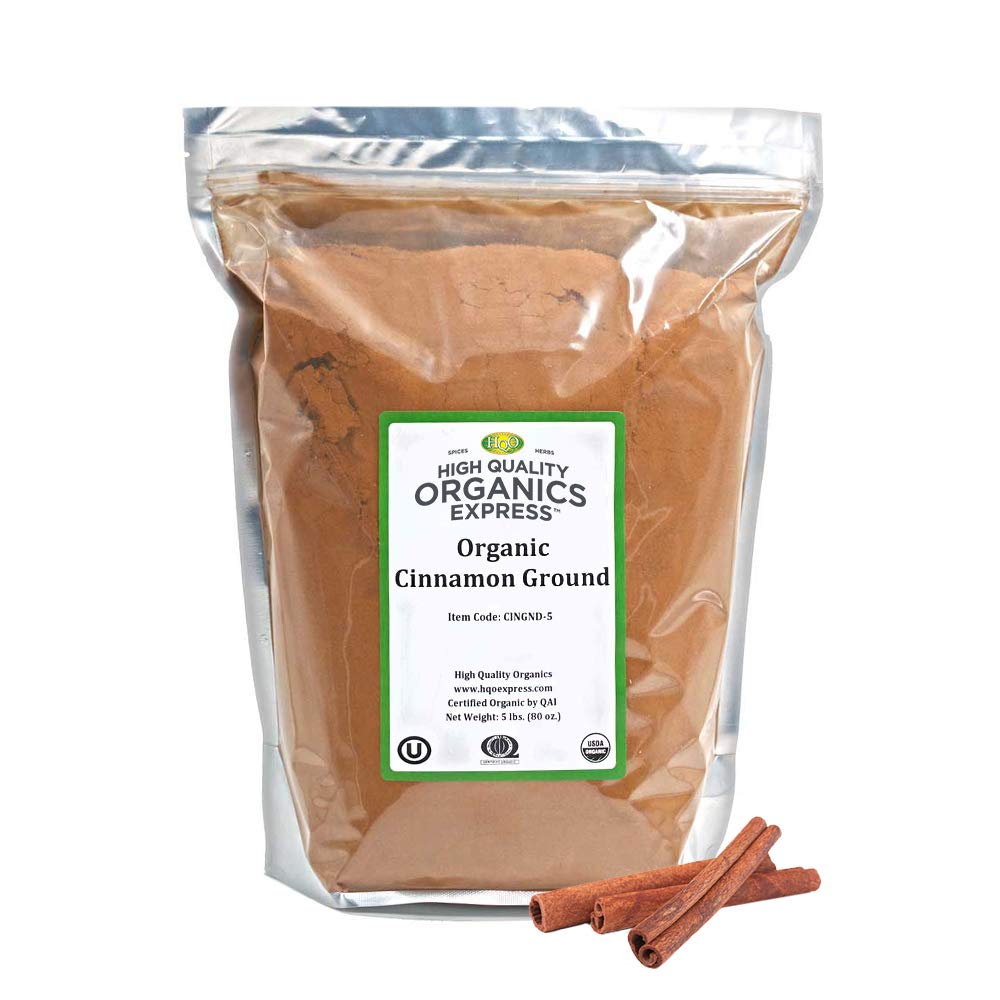 If you aren’t quite ready to make a five-pound commitment to cinnamon, then we recommend investing in a shaker of the McCormick Classic Ground Cinnamon. The pantry staple has a deep, sweet, and warm flavor and rich reddish-brown color that improves both the aesthetic of a meal and the taste. Made without any added fillers and free from GMOs, McCormick cinnamon is age 15 years to deliver a strong and rich flavor. 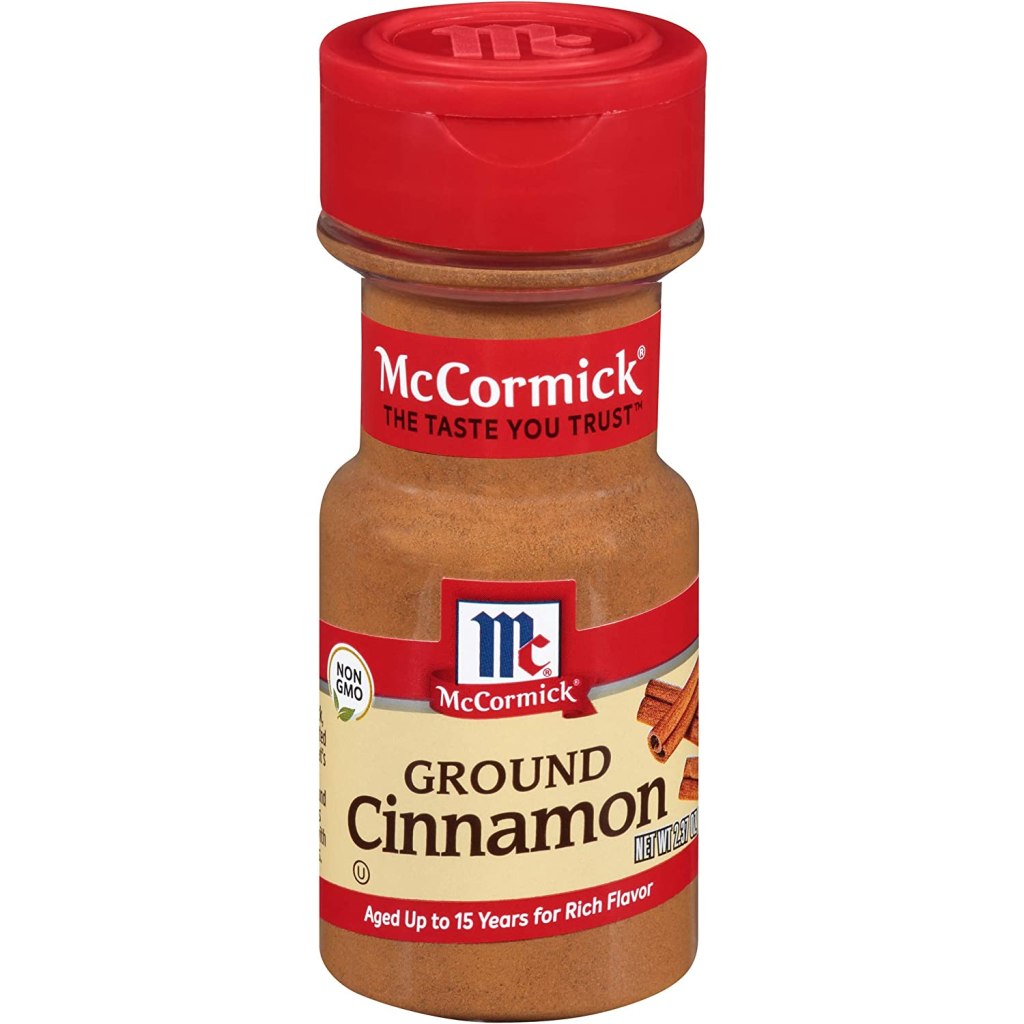 Cinnamon sticks are a great way to incorporate flavor into several dishes and drinks with minimal effort. We typically think of cinnamon sticks being added to apple cider during the holidays, but these delicious and nutritious food-safe items can be used year-round. Add some extra spice to rice while it’s cooking, place a cinnamon stick in a slow cooker while the meat is being prepared, or use a cinnamon stick as a stirrer for coffee or tea. We like the Organic Korintje Cinnamon Sticks, which are certified organic, raw, and arrive in a resealable bag. Most importantly, they are delicious. 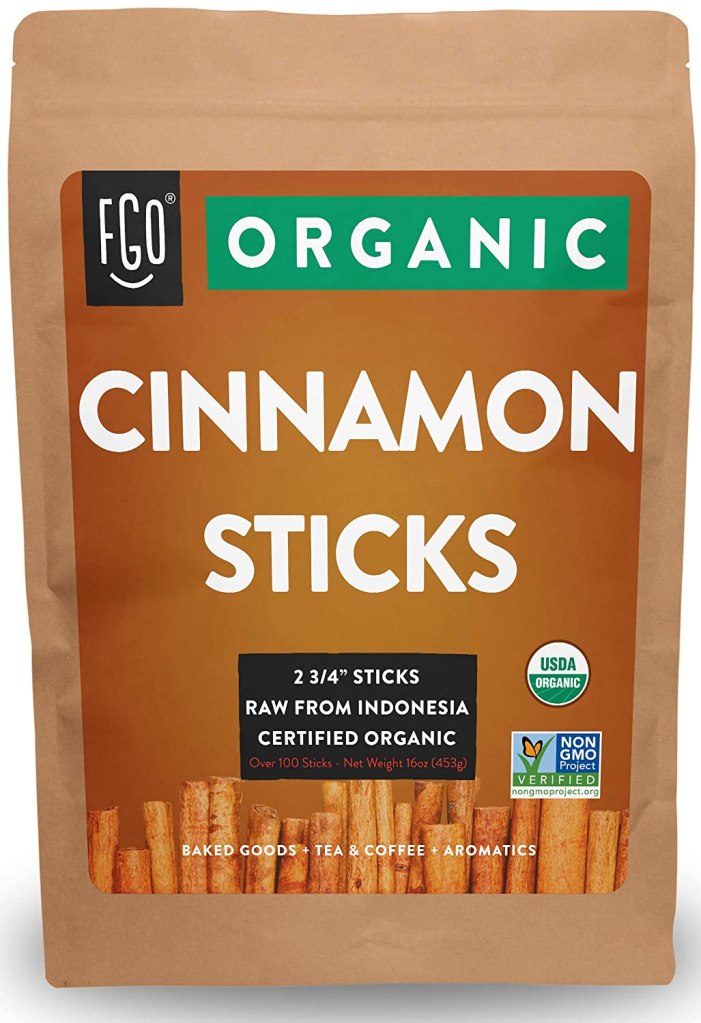 7. Be Well By Kelly Sweet Seasoning

For bakers and chefs who want a delicious and easy to use seasoning that incorporates rich flavors and has some added health benefits, we like the Be Well By Kelly Sweet Seasoning. Using a combination of sweet spices, this organic seasoning is comprised of Ceylon cinnamon, turmeric, nutmeg, cloves, and cardamom. A great addition to everything from smoothies to muffins, the Be Well seasoning makes it easy to incorporate the health benefits of cinnamon into your diet. 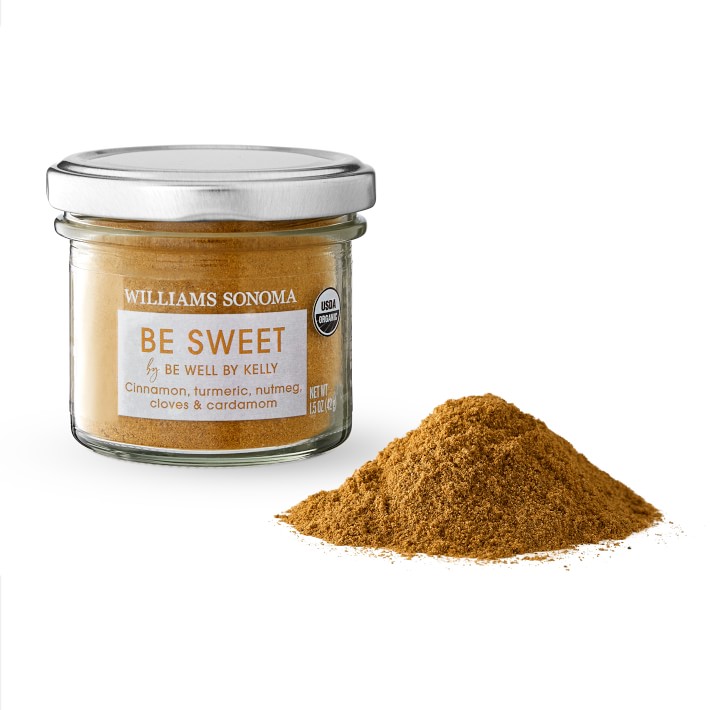 Be Well By Kelly Sweet Seasoning

As we mentioned earlier, some studies have found that cinnamon can be beneficial to those who need help regulating their blood sugar levels. The Metaven Advanced Blood Sugar Support Supplement may help slow the absorption of glucose and increase glucose uptake to help improve blood sugar levels. The liquid supplement includes Chromium, Cinnamon Bark, Gymnema, Bitter Melon, and Nopal Cactus and is made without the use of alcohol. The liquid is made from organic herbs and is slow-brewed for 36 hours. We also like that it is alcohol-free and absorbs quickly. A great option for anyone who doesn’t like swallowing large supplement capsules, Metaven recommends taking one to three drops per day. 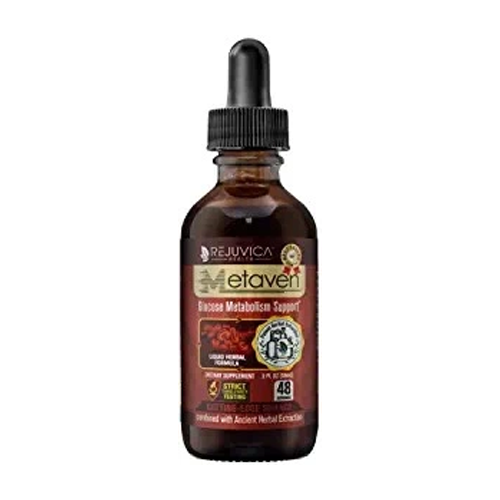 Turmeric Is One of the Most Powerful Nutritional Supplements Around. Here’s Why.