Odds are you’ve low-key heard of ginger and its myriad health benefits. Or perhaps you’ve wondered what those weird root-like brown things in the produce bins were as you reached for your latest bag of oranges.

If you’re a home cook, maybe you’ve peeled and diced your way to aromatic curries and other concoctions, savoring the strong and unique flavor with each passing bite. Or perhaps your familiarity with the plant extends to your last cold, when you sipped ginger-and-honey tea in hopes of your head clearing up sooner. Regardless of what you thought you knew about ginger, this superfood is officially on an upswing.

That’s because there are so many benefits to ginger that make it impossible to ignore. Read on to learn more about why you should consider adding it to your daily diet, and how you can easily do so with some of the tastiest ginger shots that are now available to buy online.

Ginger is part of the Zingiberaceae family, which means it hails from the same group of spices as turmeric, cardamom and galangal. That also means it has plenty of proven health benefits and as such it has been used in many alternative medicine practices.

Gingerol, one of the natural oils found in the plant, has been known to help with digestion and nausea, plus it may help ward off the flu and common cold. It also contains anti-inflammatory and antioxidant properties, which fight off free radicals in your body, and has been linked to increased brain function.

If weight-loss goals are on your agenda this New Year, you may also consider adding more ginger to your diet thanks to its potential benefits in reducing obesity, body mass and blood insulin levels, not to mention that it could also help to improve post-workout recovery. While more research needs to be done, early studies have shown that ginger may help to reduce inflammation and ramp up the number of calories you can burn during the average day.

Need more reasons to start shooting ginger shots in the coming weeks? The plant has also been linked to decreasing joint pain and stiffness, it could improve heart disease risk factors, ginger potentially lowers cholesterol levels, and gingerol may even help to prevent certain cancers.

Where To Buy Ginger Shots

Sure, you could start chopping up extra ginger and throwing it into stir-fry and smoothies, but it probably won’t take you long to get sick of it. Not only is ginger a potent flavor, but most of us need variety in our lives. Instead, you may want to consider adding a shot to your daily routine to get all of the benefits with zero extra hassle.

Typical shots of ginger contain the bare minimum of ingredients: we’re talking basic juiced ginger with a little extra citrus juice, sweetener or maybe spice. Still, making your own home-brewed ginger is also work, especially if you plan on chugging some every day. That’s where store-bought ginger shots are a huge time saver.

These days, the tasty immunity boosts come in a variety of flavors, sizes and servings so that you can figure out which brand is best for you and your lifestyle. Looking to minimize additives? Go for a straight-up shot. Want something that’s easier to stomach? Consider a fruit-filled alternative.

The Ginger People Rescue Shots contain 30% ginger juice to deliver a natural boost for your general well-being, vitality and digestive process. They are free from caffeine, gluten and GMOs. Plus, they are also shelf-stable, meaning they require no refrigeration. Depending on your taste preferences, you can choose between three different flavors: wild turmeric, coconut and lemon & cayenne. The first is a fan favorite, as wild turmeric features a complex taste made up of earthy, peppery flavors. On the other hand, the coconut and lemon flavors deliver a much fruitier experience. 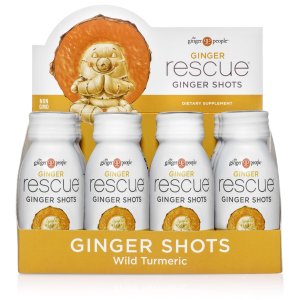 With its ginger-filled ingredient list, the KOR Shots Wellness Ginger Organic is a great way to give your body an immunity-boosting shot. Each shot is made up of solely organic ingredients in the form of ginger juice, lemon juice and coconut water. You’ll also find a hint of cayenne pepper for a bit of added flavor and a more pleasant experience as you shoot your morning boost. At 1.7 ounces, this shot is an ideal pick-me-up for the morning, and, as KOR Shots must be refrigerated, this shot can provide a refreshing burst at the same time.

BEST FOR ON-THE-GO USE

Ginger Time Ginger Shots keep things simple and delicious. They are available in pack sizes ranging from two to 48, depending on your needs. Furthermore, the organic makeup of ginger juice, lemon juice and honey deliver a shot that doesn’t just give your immune system a boost; it tastes great, too. These refrigeration-free shots are full of B vitamins and free from preservatives, GMOs and any artificial flavors. 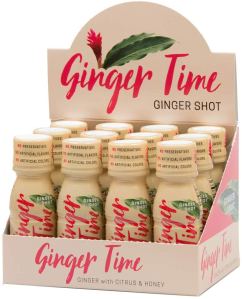 As the flavor of ginger can be a little overwhelming for some people, Rooted Shots Ginger Lemon Cayenne Pepper Shots were created with a more palatable experience in mind. In addition to large amounts of dried organic ginger, you’ll find lemon and cayenne pepper on the ingredient list to give the shot a more enjoyable and less harsh flavor than pure ginger alone. Furthermore, each shot comes dried and individually wrapped, which makes these a space-saving and especially easy-to-travel-with product compared to other pre-bottled brands. 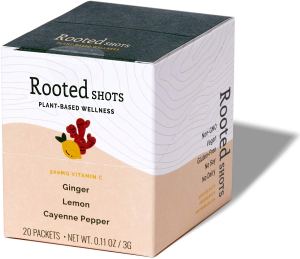 If you’re looking for a well-rounded, daily shot of immunity-boosting power, look no further than this vitamin C-filled shot from Alfa. The set comes with 20 shots per box, and each ginger-infused bottle is also loaded up with extra immunity-boosting vitamins like turmeric and echinacea. Chug one every day during the winter to keep up your health, or start taking them the second you feel a cold coming on in order to help it pass as quickly as possible. 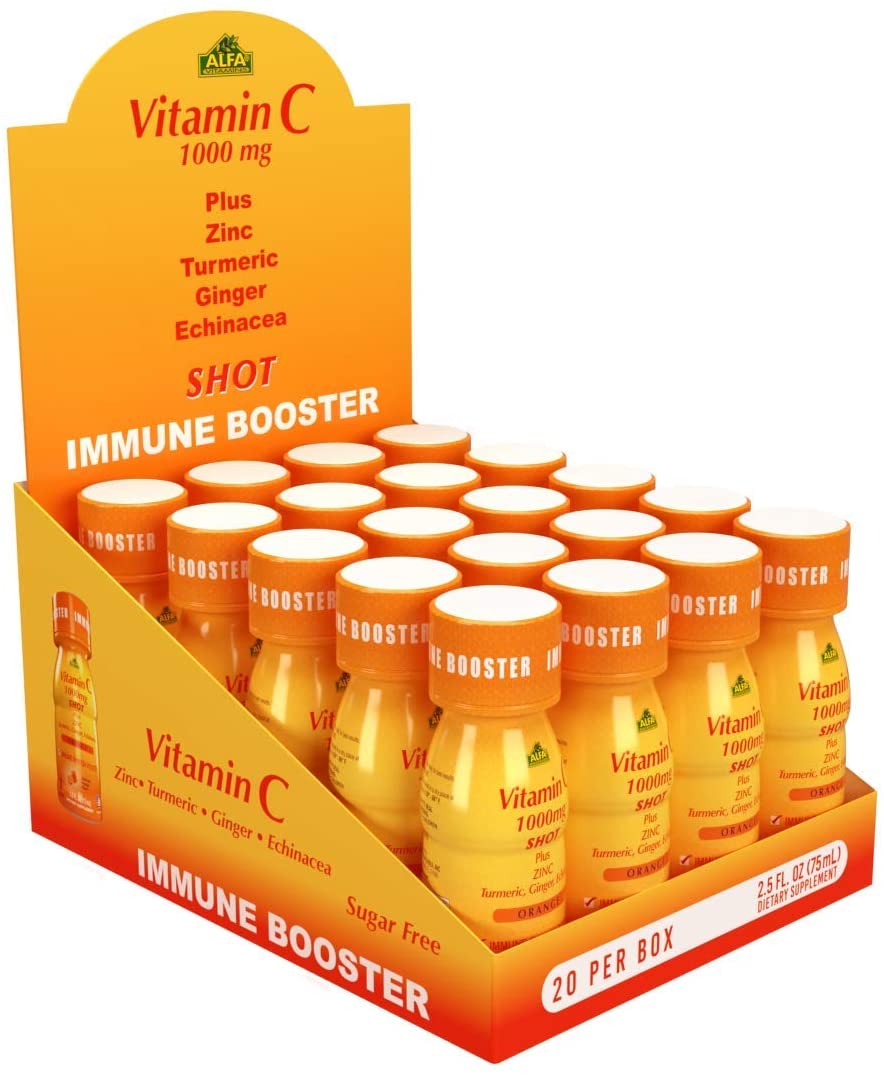 If you’re looking to boost your overall health and veggie intake, we’re fans of this organic ginger-laced offering that comes with half your daily recommended serving of fruits and veggies. The cold-pressed juice gets bonus points for not needing to be refrigerated, which means you can enjoy it cold from the fridge, on the go after a workout, or warm in a latte with your favorite milk or plant-based beverage. 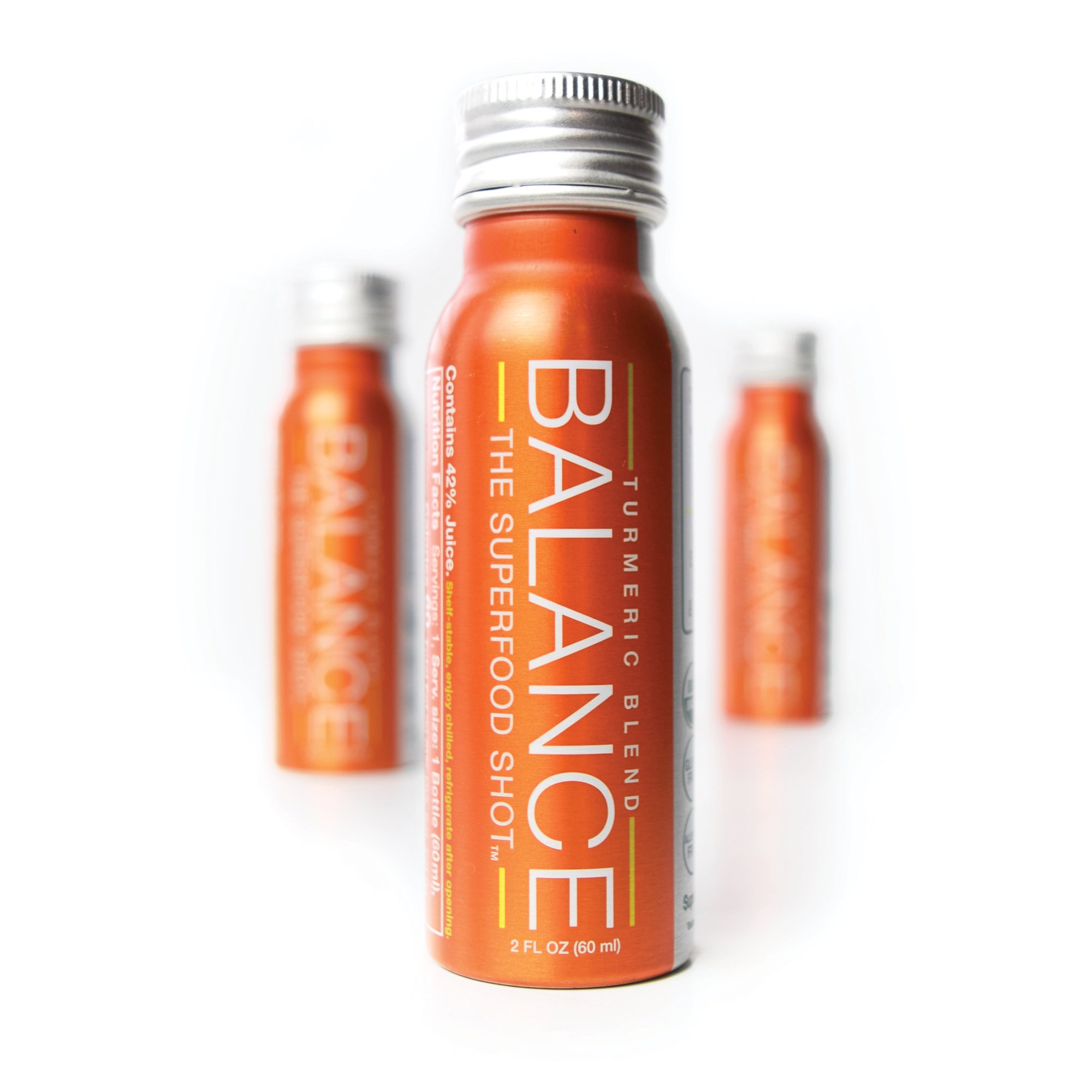 Looking for a refreshing coffee alternative in the mornings? These cold shots ought to wake you up. Each two-ounce bottle is made from organic, cold-pressed ginger, turmeric, lemon, orange and cayenne pepper, offering an immunity-boosting hit of citrusy-ginger flavor that’s guaranteed to wake up the taste buds, if nothing else. Each box is shipped with ice packs so that the product stays cold and potent, just be sure to store it in the fridge as soon as you unpack it so that the juice stays at its optimal, inflammation-fighting level. 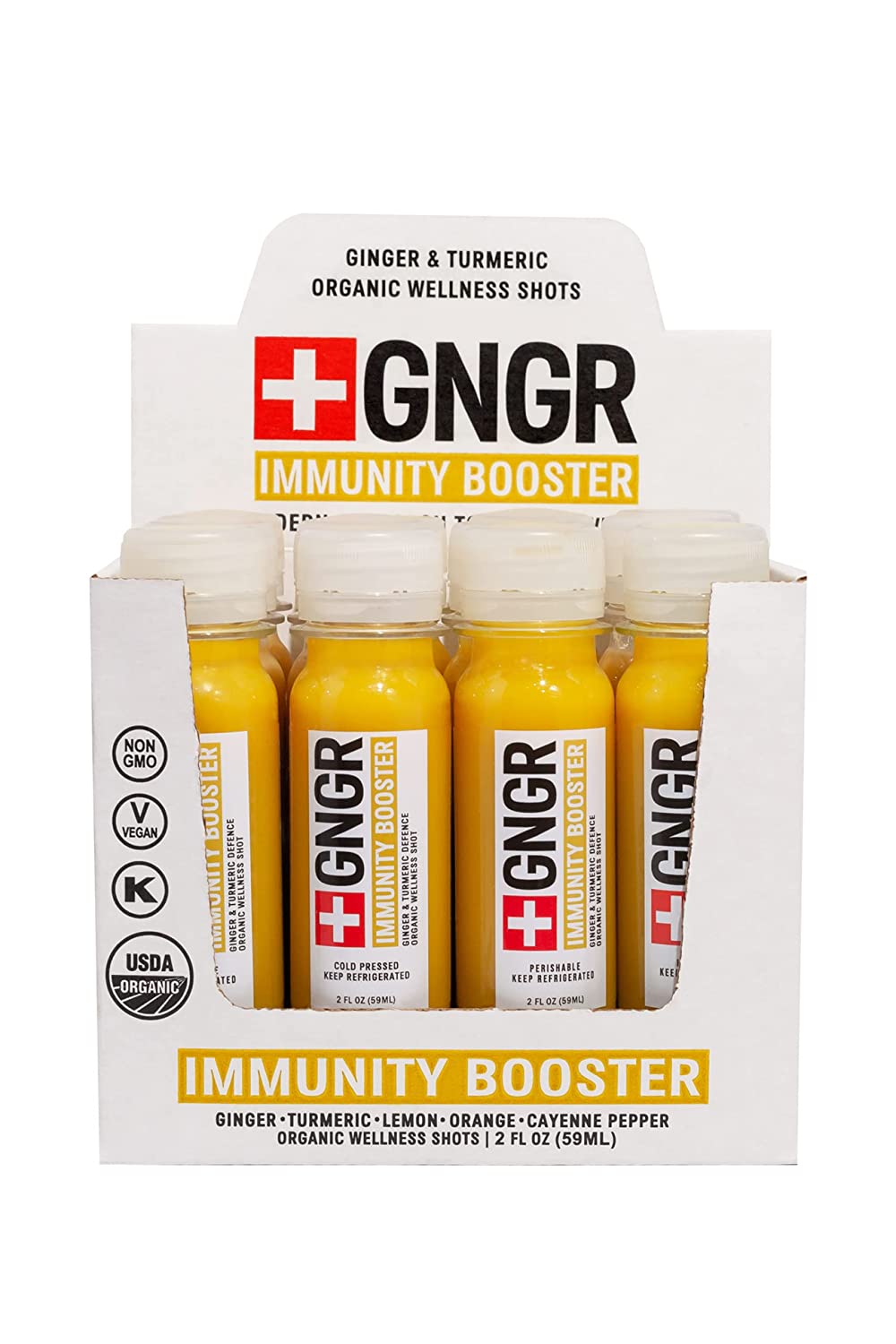 If you want to pump up your body’s defense system but can’t stomach another bitter-tasting shot of anything, this organic pineapple and coconut water-infused shot is on the sweeter side of the ginger scale. The cold-pressed juice is still loaded up with ginger (and turmeric) for all of those coveted health properties, but it’s also a lot easier to knock back — especially if you’re just getting into the immunity-boosting game. 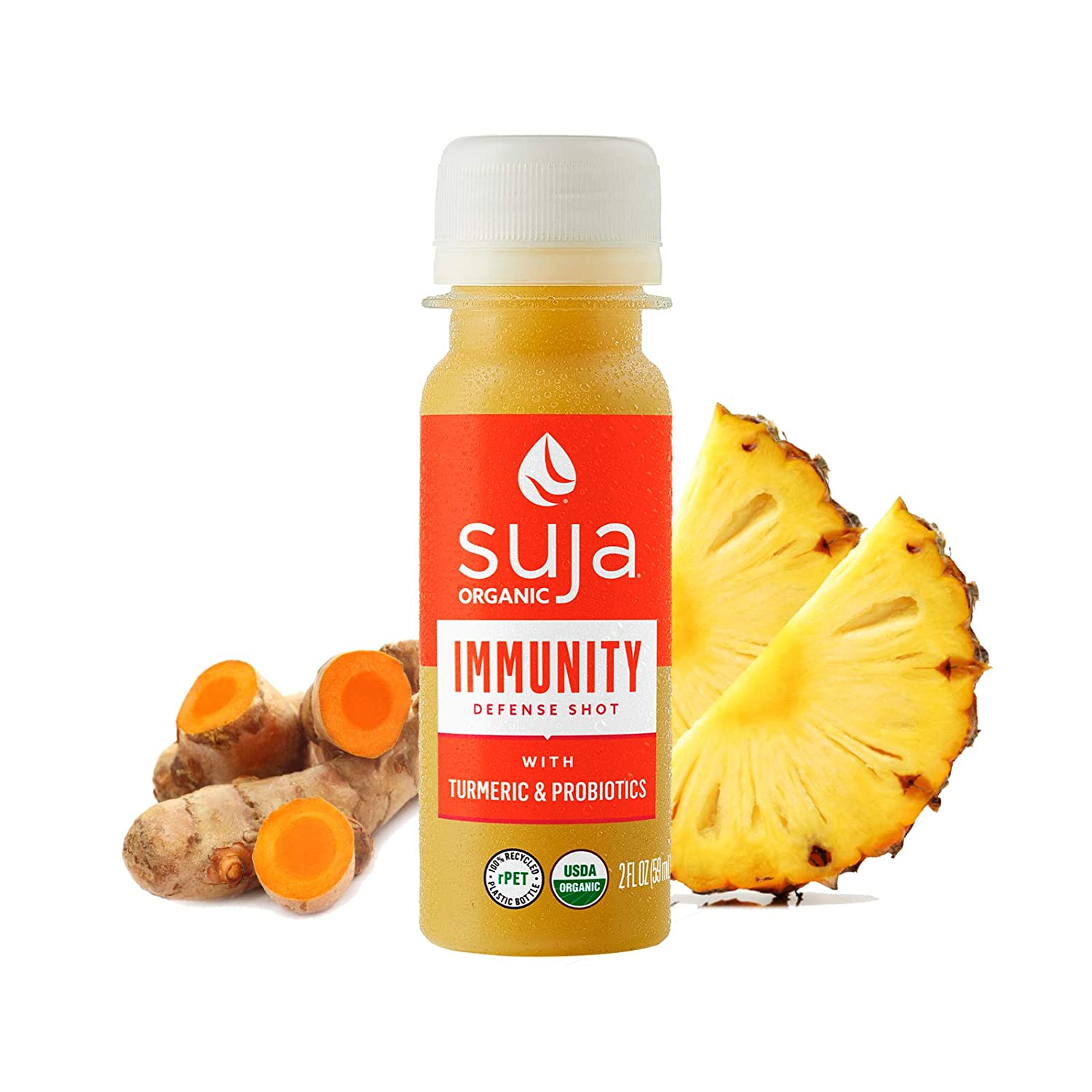 Like ginger, apple cider vinegar helps fight free radicals in the body thanks to compounds called polyphenols, which act as antioxidants. So if you’re looking for a one-two, ginger-apple cider punch from your shot of juice, these two-ounce bottles come stocked. They’re also sweeter than many other ginger shots on the market thanks to the addition of pineapple and honey, but it’s all organic, gluten-free and vegan so it still fits in with plenty of diets (or ongoing New Year’s resolutions). 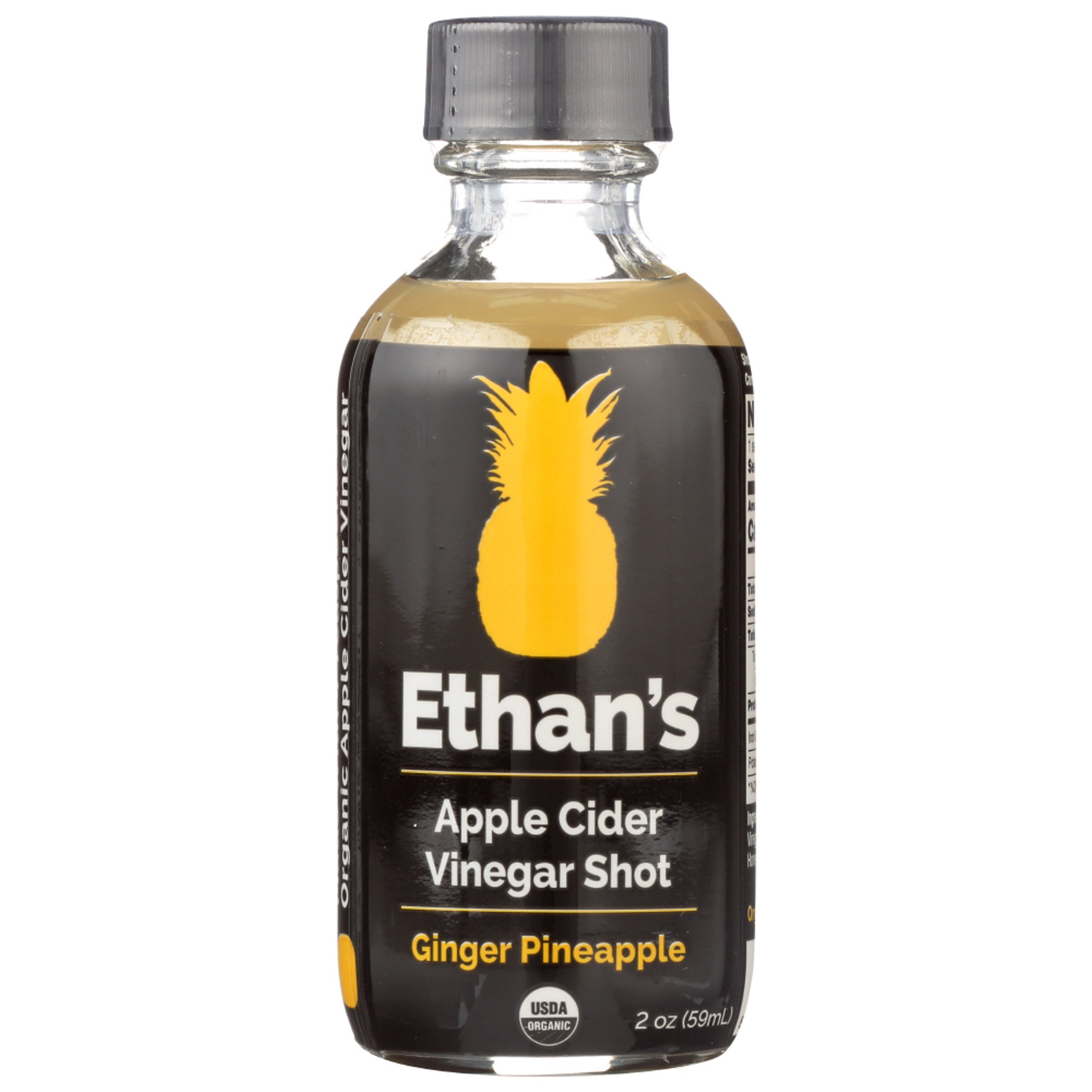 Easily take your energy-boosting ginger shots on the go with this powdered formula, which can be mixed with hot or cold water depending on your mood. It’s 100% plant-based and features lemon and cayenne flavors, which when combined with ginger are said to support metabolism and immunity. We also love that there are no GMOs and that the powder is keto-friendly, with no added preservatives, sugars or colors. 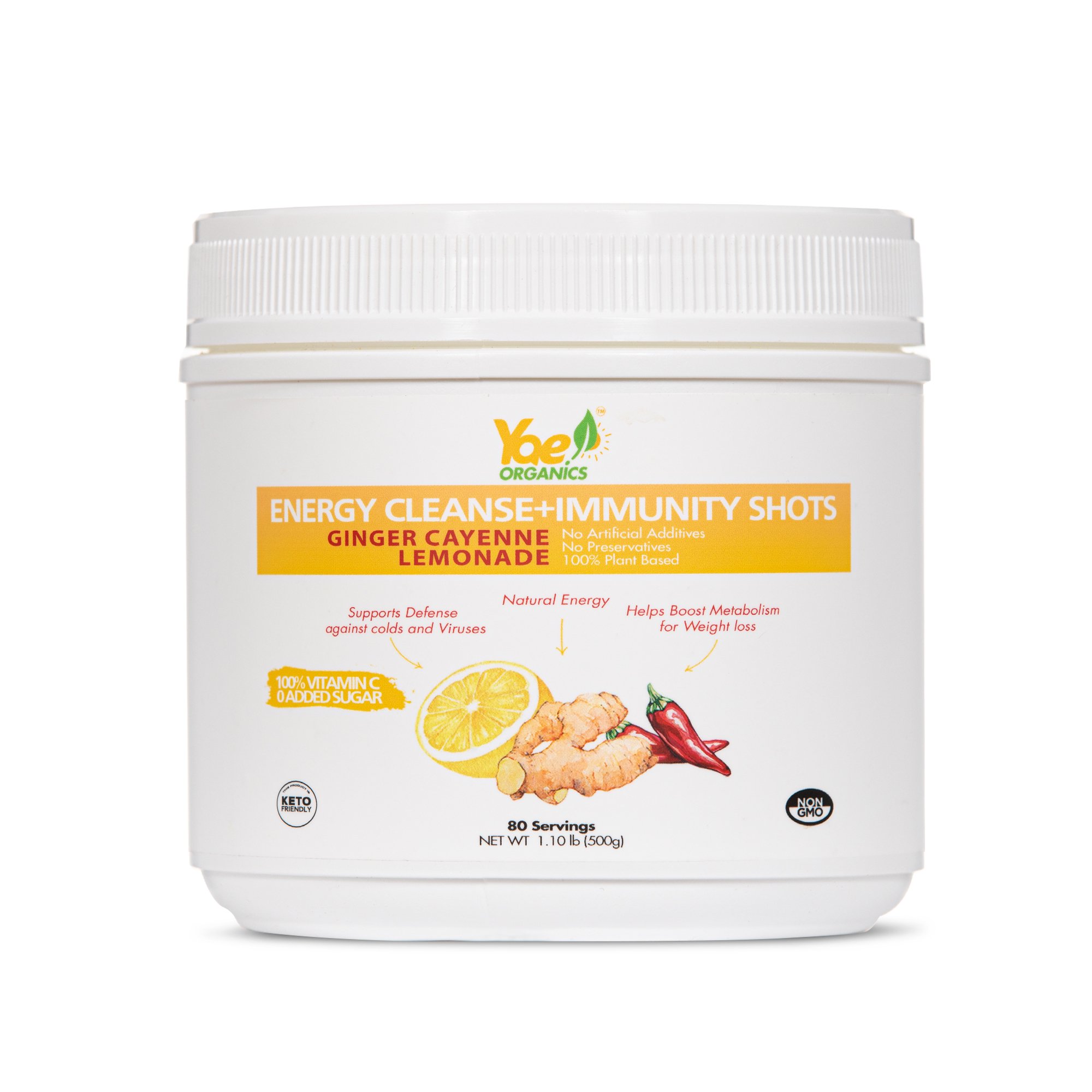