By now, we all know that juicing is good for us. The health benefits of juicing fruit and vegetables are undeniable, including easier absorption of nutrients and a higher concentration of vitamins compared to blending or eating food raw. Juicing is also easier on a person’s digestive system, since drinking the equivalent of 2.5 cups of fruit and vegetables is much gentler on the digestive tract and faster than eating the produce whole. But from the time-consuming cleanup required by most juicers, to the high prices charged in stores and restaurants for bottles of freshly squeezed juice, the juicing craze has begun to wane. Thankfully, there’s a new juicer on the market that won’t take up all your counter space and is less expensive in the long run than a daily trip to your local juice shop.

NutriBullet, known for its compact blenders and full-sized juicers, have combined their two strengths to make a compact juicer. The new NutriBullet Slow Juicer has the power of a full-sized juicer, including a wide opening that can handle large pieces of fruit and vegetables, with the footprint and cleaning requirements of a much smaller device. What does that mean for customers? SPY was sent one of the new NutriBullet Slow Juicers and one thing is for sure — this is a juicer you’ll actually use regularly. 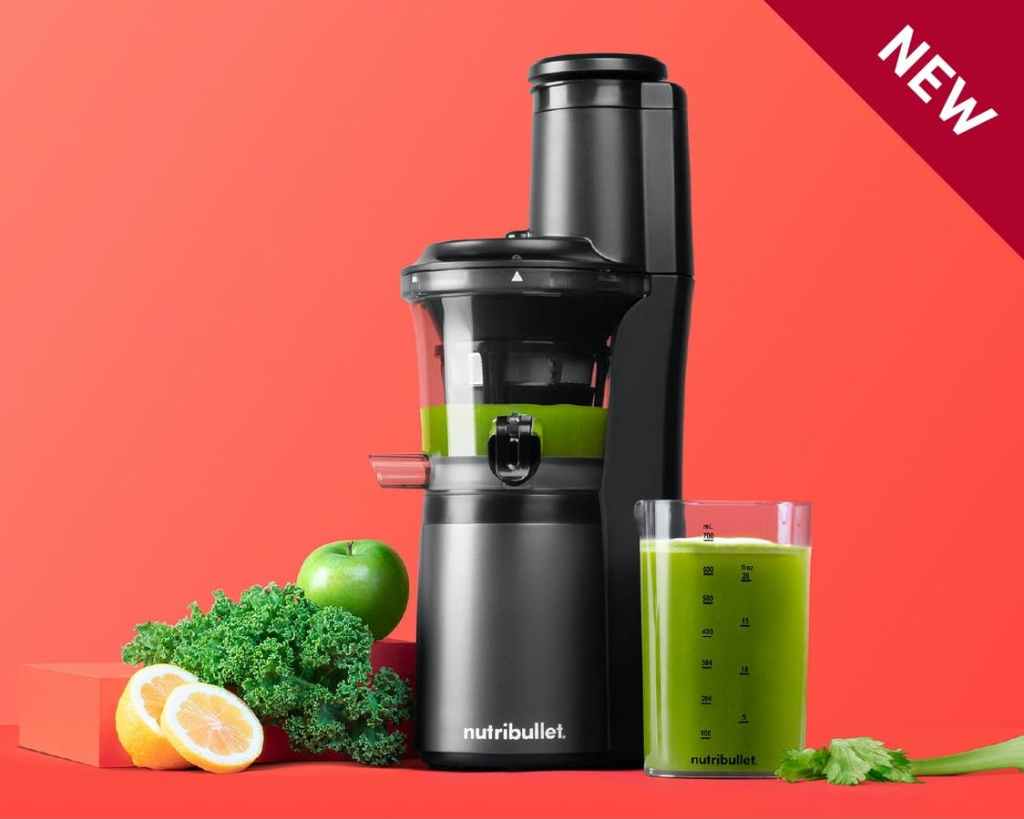 NutriBullet Slow Juicer: What We Liked

If real estate is all about location, location, location, kitchen gadgets are all about size, size, size. Space is limited in kitchens and for something to be worth counter or storage ‘real estate,’ it needs to be compact and easy to use. The NutriBullet Slow Juicer is both. All the pieces included are designed intuitively to be assembled with little instruction. The actual juicer takes up much less space than our old clunker juicer, which is collecting dust. For comparison, here’s a picture of our NutriBullet blender next to the Slow Juicer. 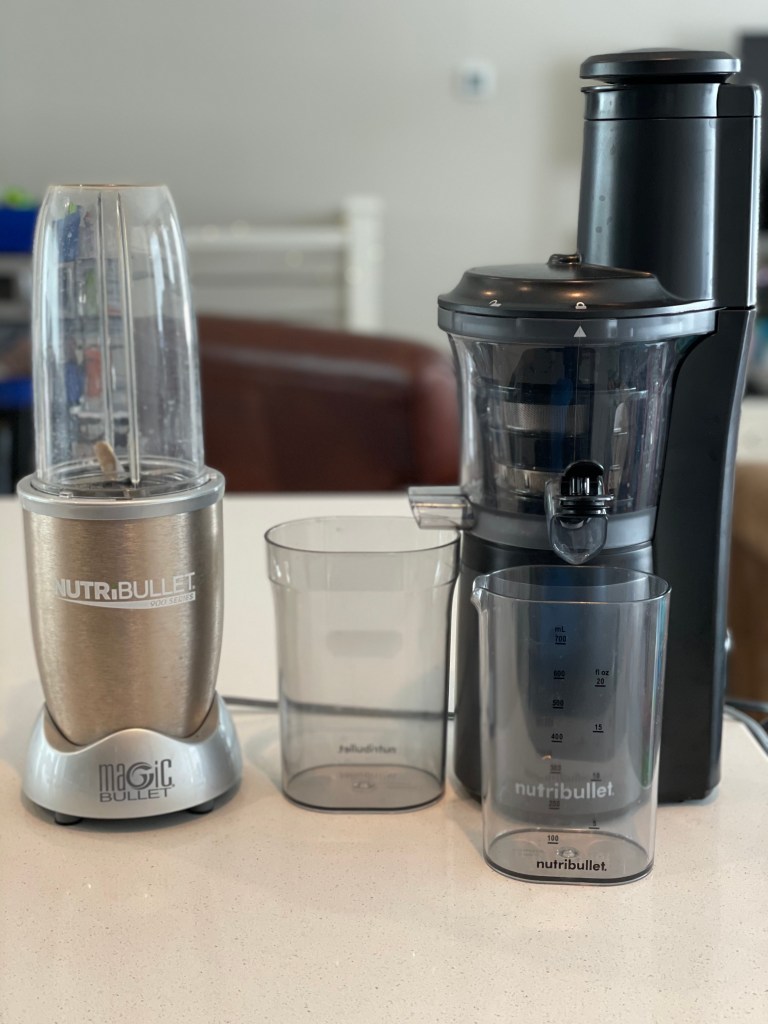 There are two plastic containers, one for collecting juice and one for collecting fiber and waste i.e. your new compost buddy. The 3-inch feed chute on the juicer is large enough to fit half an apple or lemon and a large carrot, as well as a bunch of kale. 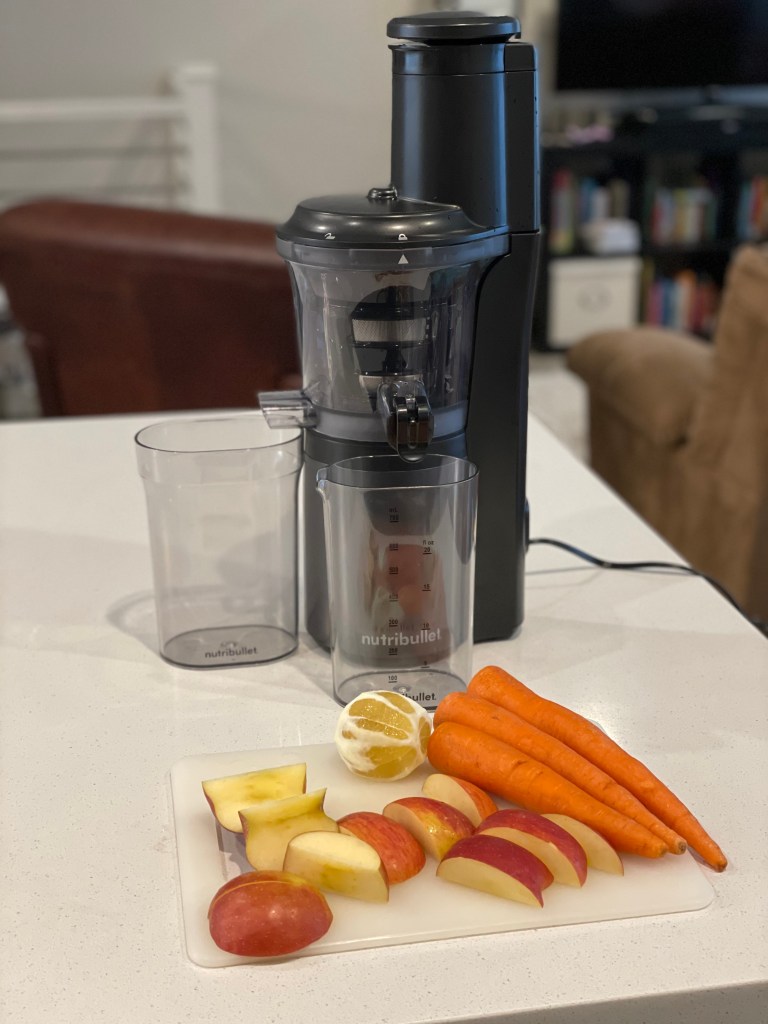 For one lemon, three large carrots, and two small apples we got almost 10 ounces of juice, which seemed like a bit more than our older, larger juicer. The juice spout includes a stopper, which is a nice feature and allows users to keep the juice contained. Although the NutriBullet comes with containers both for juice and waste, they simply stand next to the Slow Juicer and can be replaced by a cup or bowl if you misplace them. 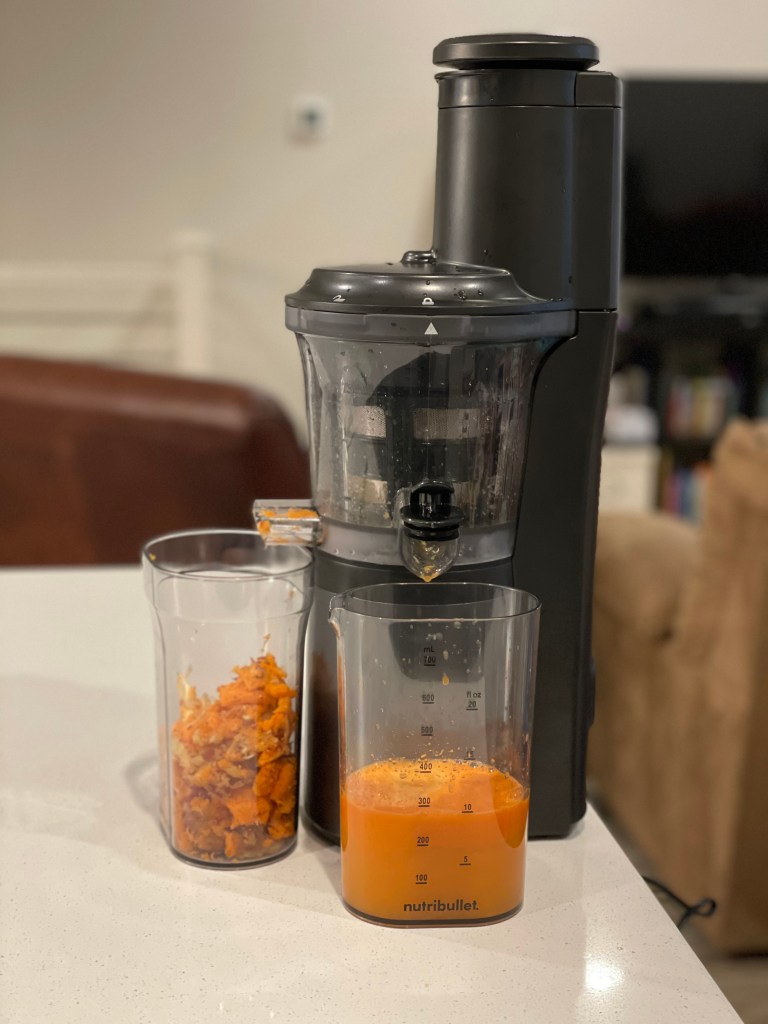 The NutriBullet Slow Juicer prides itself on being quieter than competitors because of its slow speed. There is definitely still a noise element (‘tired ghost’ was our top choice for identifying the unique noise), but it was substantially quieter than larger juicers or blenders. Yes, it does move a bit slower to help masticate the fruit and vegetables, but this extra time didn’t feel like a con and the slower motor made it less scary to feed produce into the chute.

Clean-up was quick and the NutriBullet comes with a cleaning brush, but we didn’t even need it. Simply rinsing each part with hot water and soap was enough to remove all the fiber from the juice screen and auger.

Setting up the NutriBullet Slow Juicer was relatively fast and the clear instructions and pictures made assembly straightforward. Mostly. The one area we did struggle with was the steel-tipped auger, which was not as intuitive to install. Following a few failed tries, we eventually got it in place correctly.

After feeding a small piece of apple and a slice of carrot into the juicer, the juicer turned off abruptly. We’re still not sure if we were going too fast (slow is in the name, after all) but we followed the troubleshooting steps in the manual and were able to reset the juicer in seconds. We carried on with juicing, still unsure what the issue was, but since it was our first attempt, we’re chalking it up to human error. 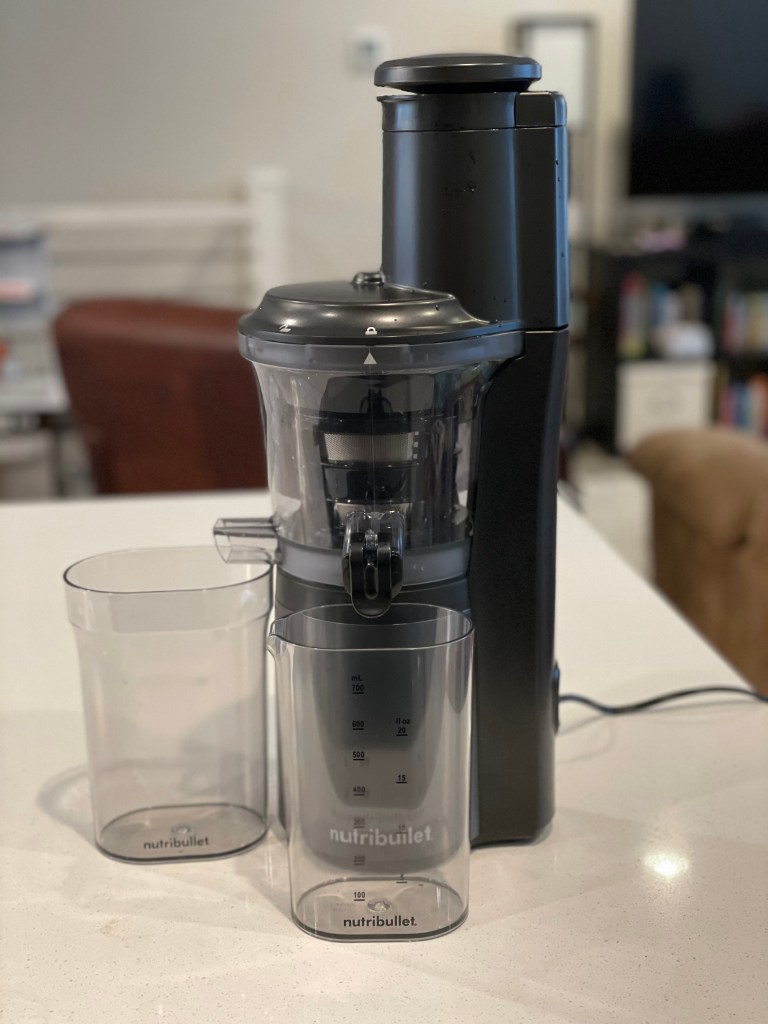 Is using a juicer at home still more work than buying a bottle of your favorite mix from your local juice shop? Yes, and it always will be. Even with the large chute, fruit cores and rinds still need to be removed and pieces of the juicer must be thoroughly cleaned. Does the NutriBullet Slow Juicer make these tedious tasks much easier and faster than larger juicers? Also yes.

Juicing is a great way to cut down on the waste of produce that is no longer looking salad-ready. It also offers a fast way to pack in a lot of health benefits into an easy-to-digest glass. The biggest hurdle to juicing is the time and effort needed for prepping and cleaning, and the NutriBullet Slow Juicer reduces both. It’s definitely worth the (limited) counter space.

Staying Healthy Just Got Easier Thanks to These Smoothie Delivery Services