Update: Since the publishing of this story, Echelon CEO Lou Lentine told Yahoo Finance that certain teams within Amazon approved the Prime branding, and that Echelon has emails and documentation to verify this claim. Lentine says that the bike was on sale for a month before a press release announcing the bike was released, at which point Echelon was asked by Amazon to remove the Prime branding, which he described as “a complete shock to us.” We’ve added new information below to reflect this new information. — September 24, 2020

Earlier this week, home fitness company Echelon announced the release of a new fitness bike developed in collaboration with Amazon — the EX-Prime Smart Connect Bike. In a press release, Echelon claimed that its new “Prime Bike” would be the first-ever connected fitness product on Amazon. Priced at just $500, the bike was touted as a potential Peloton-killer by e-commerce publishers, and Peloton shares briefly fell on Tuesday, September 22 after the announcement.

The bike was described explicitly as a collaboration between the two companies that would be available exclusively to Amazon shoppers for purchase. Like a lot of publishers, we thought this was Amazon’s way of making further inroads into the home fitness space and competing with Peloton directly.

There was just one problem: the Echelon-Amazon collaboration was a surprise to Amazon. A representative for Amazon told Bloomberg that “This bike is not an Amazon product or related to Amazon Prime,” and the product listing for the “Prime Bike” was quickly scrubbed from Amazon.

In retrospect, there were some red flags in the original press release. For instance, the phrase “the first-ever connected fitness product on Amazon” is the kind of PR jargon that sounds impressive but doesn’t really mean anything. And while an Amazon-branded fitness bike could be a big threat to Peloton, without the “Prime” branding, the Echelon is just one more affordable Peloton alternative in a home fitness market full of indoor exercise bikes already. Per Bloomberg, Amazon wasted no time in distancing itself from the product, which is currently not for sale online. 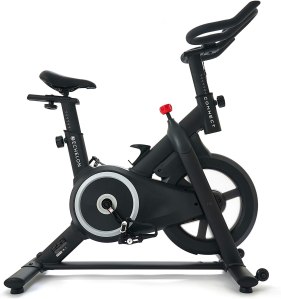 After the product listing was removed from Amazon, a representative for Echelon wrote in an email to SPY that the EX-Prime Smart Connect Bike had sold out but would be posted again with new branding. The representative also said that “There is no impact to the consumers for the bikes that were purchased.” It’s unclear if Echelon truly believed it was “collaborating” with Amazon on a new smart fitness bike, or if this debacle was simply the result of over-eager branding and PR during a botched product rollout.

“Echelon built a product to sell on Amazon” and the company “has been in communication with Amazon since inception,” the representative wrote in the email to SPY.

Of course, many brands and third-party stores sell goods on Amazon or develop products to sell on Amazon’s e-commerce platform. Echelon declined to answer specific questions about the incident.

As more consumers look for ways to work out at home safely, companies like Peloton have seen gains over the past year. Earlier this month, Peloton announced year-over-year revenue gains of 172% heading into the fourth quarter of 2020. And while Amazon may not be offering its own “connected smart bike” at the current moment, there are plenty of Peloton alternatives for budget shoppers to choose from.

Before the listing disappeared, the Ex-Prime bike seemed like a relatively accurate Peloton derivative with a similar build, look and feel of the luxury cycling machine. The only notable differences were the weight, with the Peloton weighing in at just above 130 pounds and the new bike only weighing 80 pounds, the lack of a screen and lack of clips for spin shoes.

“So how this happened, in January, we met with Amazon at the Consumer Electronics Show. And Amazon was very excited to get our entire line of Echelon connected products up on Amazon… One of the things they asked for was a $500 price point bike as well. So we worked on a $500 bike, and we agreed on calling it Prime. The buying department agreed on calling it Prime. We have emails, we have correspondence, everybody was onboard in the buying department.” 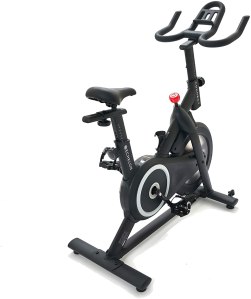