If you’ve been even remotely interested in fitness in the last three or so years, then you’ve heard all about Peloton and probably considered buying a spin bike for your home gym. (Full disclosure: We’ve used and reviewed the Pelton bike, and we love it.) But seeing as a Peloton bike will set you back nearly $2,000 for the cheapest model, a fitness enthusiast has to ask if there’s anything else out there. Of course, there’s the traditional indoor exercise bike, but there’s something else you’ve probably seen in gyms but perhaps never considered: the humble air bike, also known as a fan bike.

These bikes are a little old-fashioned, but they can give you a great cardio workout. Plus, you know, they’re cheap! (At least, compared to a Peloton or most gym-quality spin bikes, that is.) If you’re looking for the best air bikes for sale in 2021, keep scrolling for all the details.

So, what exactly is an air bike?

An air bike is a stationary bike with pedals and arm handles attached to a large fan at the front. Like an elliptical, the arms and pedals move together to move the fan. As you try to work harder and push faster, the fan becomes more difficult to move due to increasing air resistance. The end result is a full-body workout that pushes back as hard as you push forward, giving you as much of a challenge as your body can handle for as long as your body can handle it.

OK, but who uses an air bike these days?

Well, anyone who wants resistance directly connected to their effort can and should choose an air bike. That could include high-intensity interval training (HIIT) or CrossFit enthusiasts who wish to take advantage of the ability to go from no resistance to high resistance in seconds. But it could also include seniors or those just looking for some full-body exercise without having to worry about encountering too much resistance. Just check out this clip of a 95-year-old man getting some exercise in on one of our picks, the Assault AirBike, and see for yourself.

Because of the mechanics of an air bike, the only stats you need to worry about are the price and the size of the fan. Smaller fans won’t be able to build up as much air resistance and larger fans will be able to build up a lot. Beyond those qualities, choosing the right air bike is just a matter of personal preference over design or other features.

So now that you know a thing or two about air bikes, check out a few great air bikes below. Every one of them promises to work as hard as you do to deliver the cardio and toning results you want.

The Assault AirBike Classic is definitely one the best air bikes available today. A fixture of CrossFit events, this bike is well-made with a legit attention to detail and offers a rigorous workout. The 25-inch diameter steel fan offers incredible resistance for those who want it and 20 sealed ball bearings throughout the frame and pivot points ensure a smooth ride and long-term durability. You can monitor time, distance, calories, watts, RPMs and speed via a screen, which comes with two AAA batteries, and can monitor your pulse with the heart rate monitoring program.

Plus, it retails for a fair $700, right in the sweet spot of air bike prices. Alas, inventory ebbs and flows on Amazon, meaning price gouging is common, but the air bike is available for purchase on Assault’s website at its typical price. 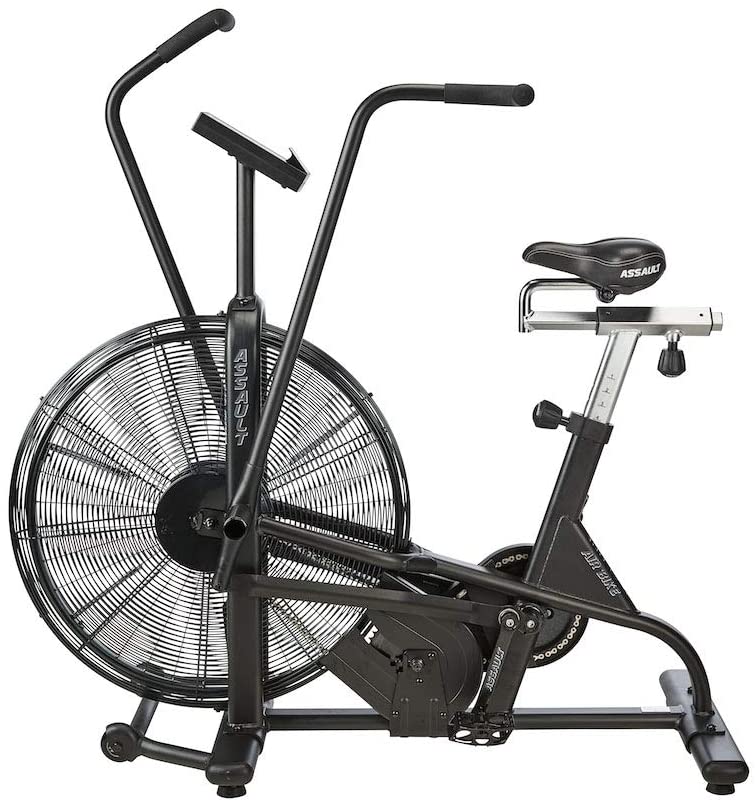 For another excellent air bike, Schwinn makes some of the best air bikes around, though we think the Schwinn AD6 Airdyne Exercise Bike will suffice for most people. The air bike’s fan is big enough to offer plenty of resistance — though Schwinn does not indicate exactly how large — and it’s got enough other features to make it worth your while. You can track RPMs, time, distance calories, watts and your pulse via telemetry on the LCD screen, and the air bike also comes with built-in wheels for easy movement around a room.

On the downside, the bike can produce a decent amount of noise. It’s not enough noise to be annoying, especially if you’re focused on the workout, but enough that you might want to use headphones or pump up the volume on your TV. Also, and this is just cruel for anything that costs more than a couple hundred bucks, Schwinn doesn’t include the two AA batteries to power the screen.

But those are minor quibbles. Overall, the Schwinn AD6 air bike will deliver the level of air resistance you want, no question asked. And if you want more of a challenge, you can always upgrade to the Schwinn AD7 Airdyne Bike or the Schwinn AD Pro Airdyne. 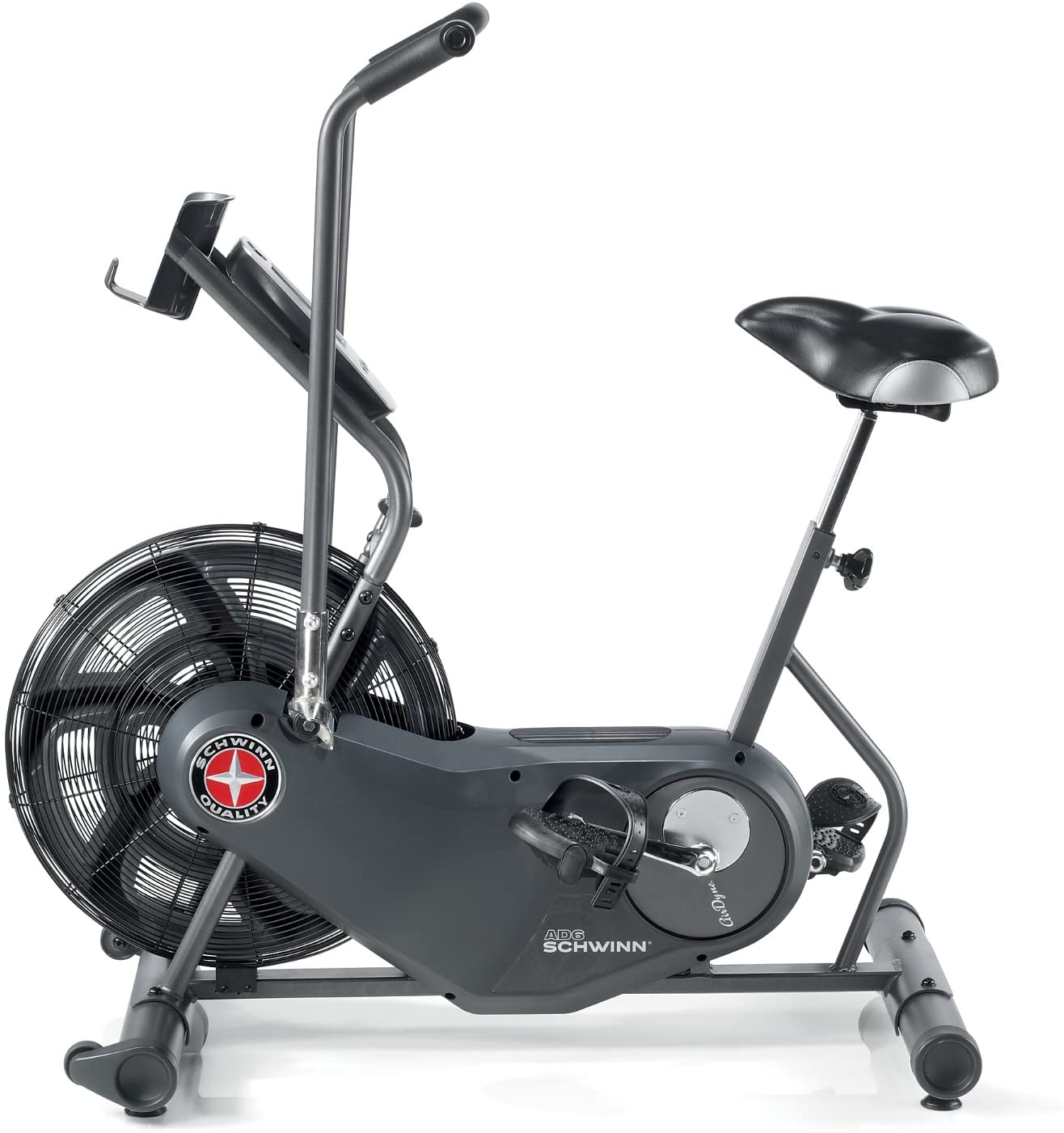 For the best air bike under $400, we’d recommend trying the Marcy Exercises Upright Fan Bike. It simply does all the basics you need in an air bike well. Moving beyond expected features like the requisite steel body and adjustable seat, the LCD screen tracks the basic, essential stats to monitor your workout, including speed, distance, time and calories. The bike doesn’t have telemetry for pulse monitoring, but if you need to see your pulse to verify you’re exercising, you’re doing it wrong, and serious exercise enthusiasts looking to maintain specific pulses should probably buy a more sophisticated air bike anyways.

Also, this air bike actually sends the air back your way when you push forward, a nice feature that surprisingly isn’t always the case. And thankfully there are transport wheels — seriously, why aren’t transport wheels standardized on all large exercise equipment — so you can easily move the bike into the corner when you’re not using it.

Overall, for its price point, the Marcy air bike will more than get the job done. 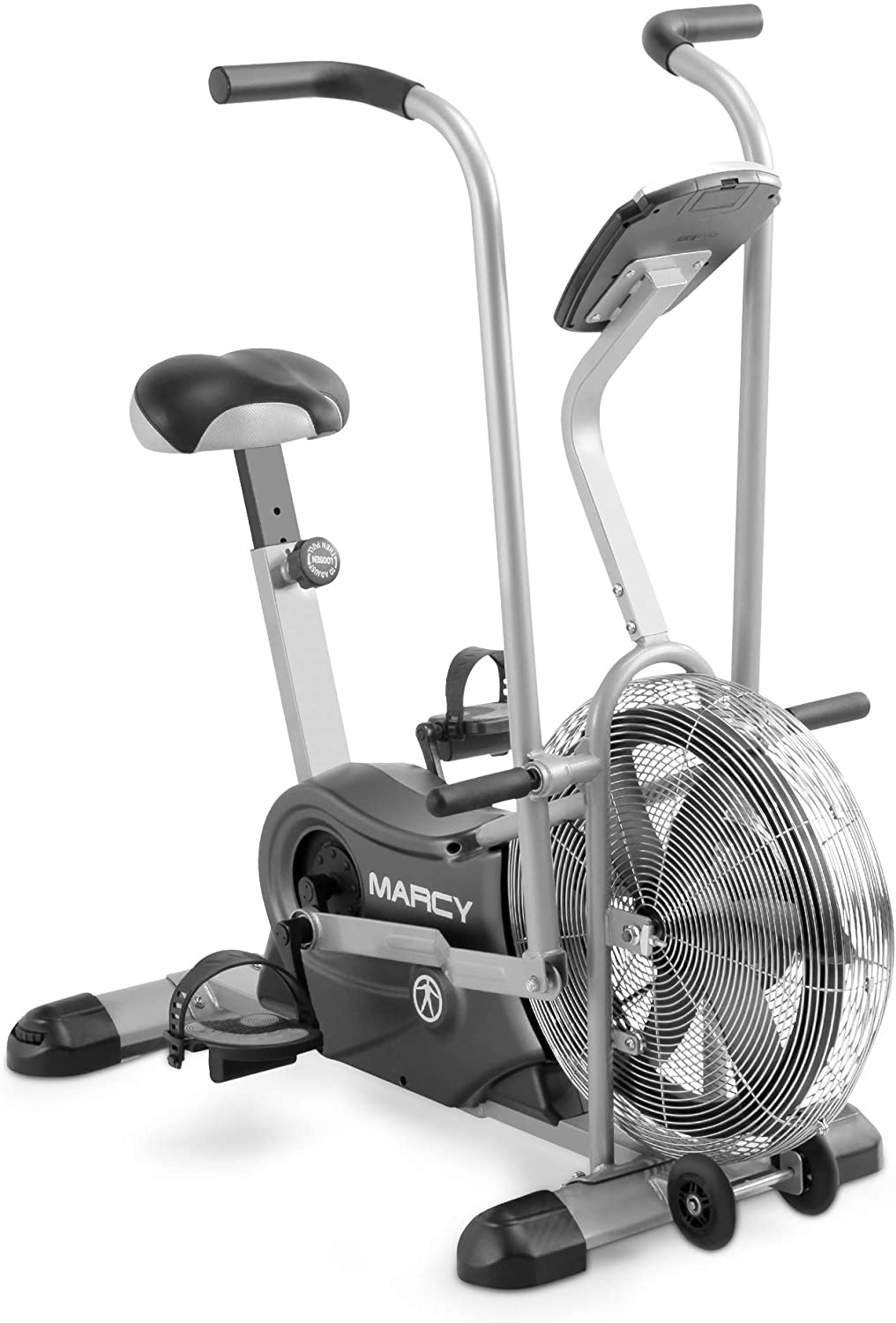 When it comes to budget-priced exercise equipment, you frequently get what you pay for. Or, more frequently the case, you gamble in the hopes that you just receive exactly what you paid for, intact and functional. When reviewers have been able to use the Sunny Health & Fitness Zephyr Air Bike, they loved it, and not just for its cheap price. They said it was easy to assemble and easy to use. And on paper, it’s a solid air bike. It’s got an adjustable seat and arms, an 18-inch diameter fan wheel, transport wheels, a built-in device holder and a performance monitor, with AAA batteries included.

But not every reviewer was so lucky. For everyone else, it was one defect or another, including missing equipment, equipment that couldn’t be assembled or broken parts after short durations of ownership, such as the pedals or the belt strip. So, the Sunny air bike is cheap, but at this price point, there is a bit of risk involved that the bike may not hold up well over time or with moderately aggressive usage. 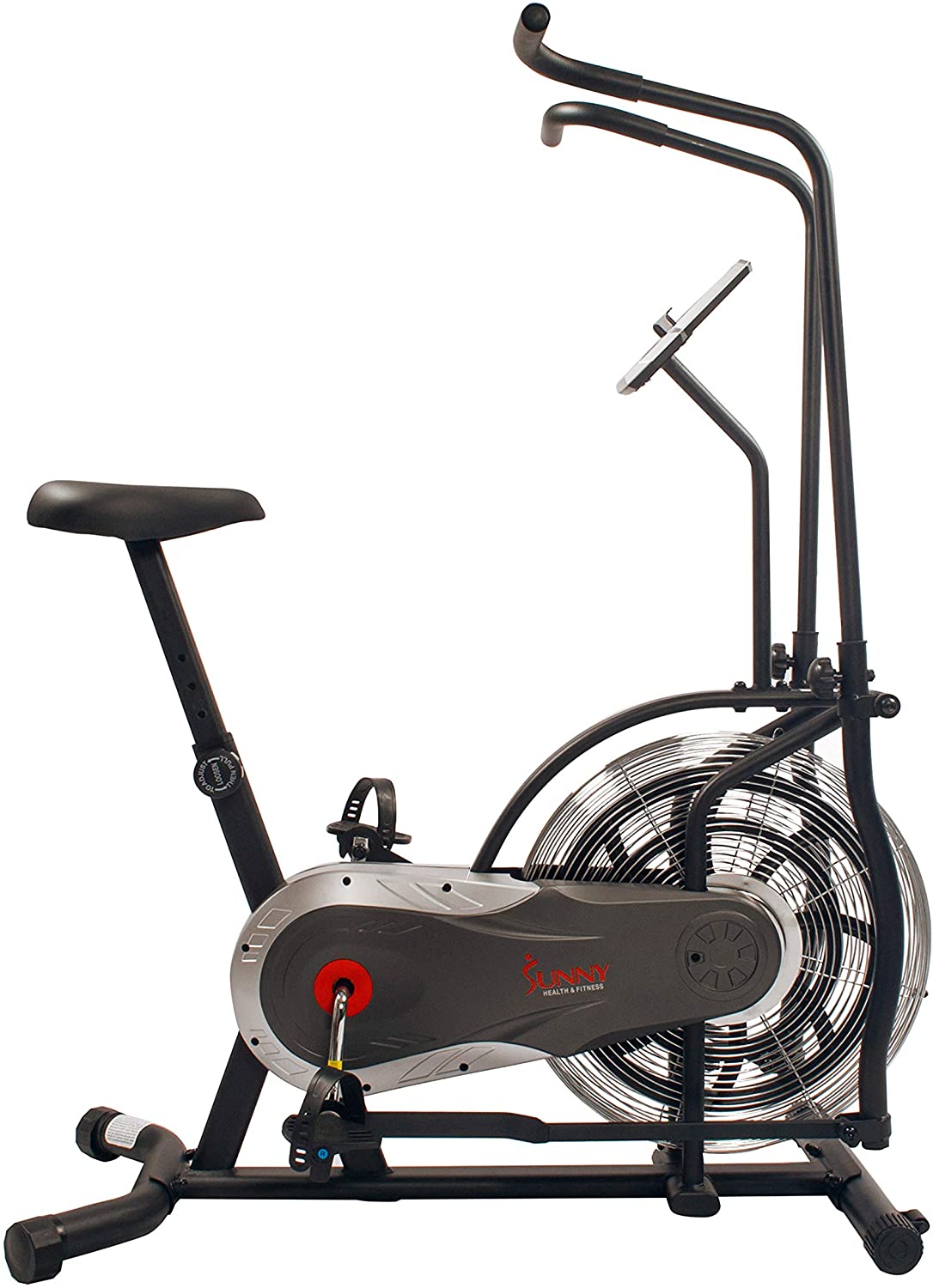 For the most challenging, and most expensive, air bike in this round-up, we turn to the Octane Fitness Airdyne ADX Fan Bike.

This air bike isn’t messing around. A 27-inch fan means the sky’s the limit in terms of air resistance, and this bike is commercial grade, meaning it’s designed to handle the everyday rigors and maximal usage of a gym. That explains excellent details like the moisture-repellent frame (because nobody should have to use sweaty equipment) and heavy-duty construction.

The bike is also easy enough to assemble and features an adjustable seat and multi-grip handles. Yes, you’ll pay for the pleasure, but even at the more expensive end of air bikes, as is the case here, you’re still about $800 away from hitting the cheapest Peloton. One reviewer actually said they sold their Peloton in favor of this air bike because, and multiple users agreed, this bike is an absolute exercise beast. So if you’re looking for a serious cardio challenge, we recommend the Octane Fitness Airdyne ADX Fan Bike. 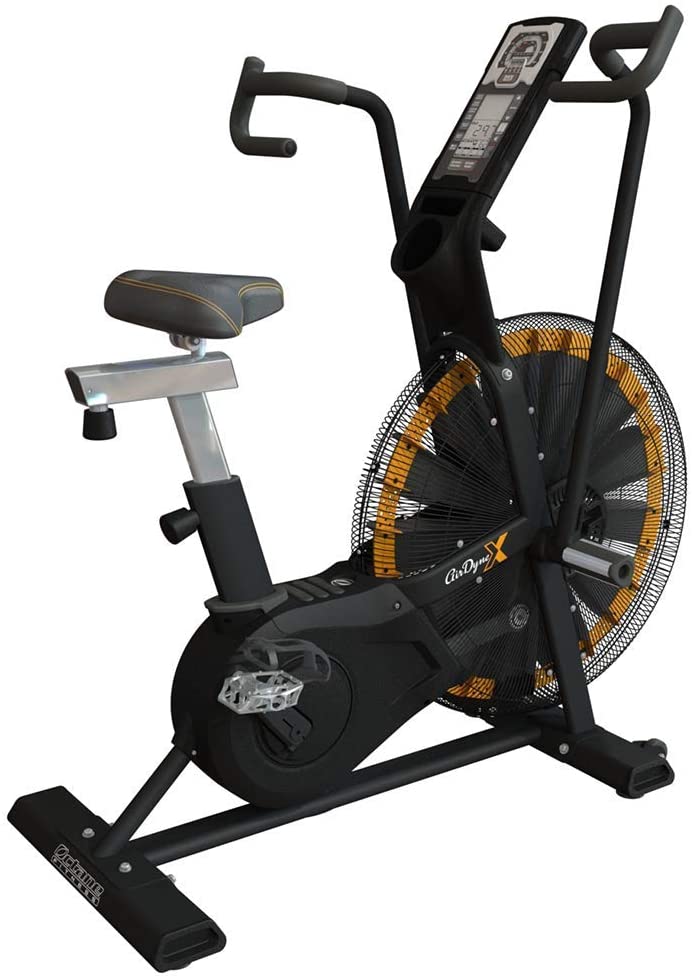 The Best Men’s Workout Shorts For Every Type of Exercise