Getting in shape means different things to different people; for those that are just looking to lose weight, a standard bathroom scale will be helpful in tracking progress. But there are many people who are looking to lose weight and build muscle mass at the same time. A weight scale won’t be very helpful in that case, because you could be building muscle without your weight changing. That’s what makes having a body fat monitor around so crucial. They’re operated in the same way as a bathroom scale — step on them, and wait for a readout. But they’re capable of so much more.

You might be wondering how a scale could possibly differentiate muscle mass from body fat, and the science behind it is pretty brilliant. A body fat scale works by sending a small electric current through one foot and waiting for a return signal through the other foot. Since fat doesn’t conduct electricity well, the longer the signal takes to transmit, the higher the presence of body fat. The scale uses this to make an estimate of the body fat. While this method is incapable of producing 100% accurate results, it can be a good way to track progress over time and gauge other health factors. These options have app compatibility, making it easy to pair your body fat monitor with a fitness tracking app, as well.

This smart scale has over 2,000 5-star reviews, and it’s capable of measuring BMI, water weight, muscle mass, and even bone mass. The scale works by syncing with various fitness apps like Fitbit, Google Fit, Apple Health, and Samsung Health. If you don’t use those apps, you can just use the Renpho app instead.

Pros: Can sync with Fitbit, can connect to multiple phones so the entire household can use it.

Cons: The scale only displays weight; other information like body fat is displayed through the user’s smartphone. 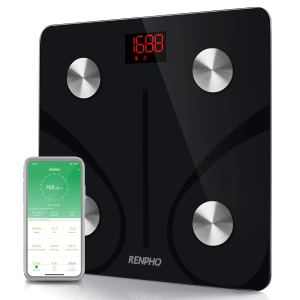 This sleekly designed scale provides a body fat percentage and weight measurement on the scale’s display. Other information can be viewed through the designated app or by syncing to apps like Fitbit, Apple Health, and Google Fit. It connects through Bluetooth, so there’s no need to try to deal with WiFi.

Pros: The only option on this list that displays body fat percentage on the scale, instead of just in the app.

Cons: Not compatible with Samsung Health. 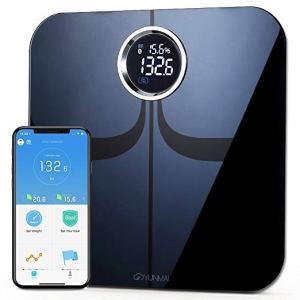 This affordable scale has a minimalist design and comes in black and white. Like the other options, it pairs through an app to deliver detailed information. It displays details like protein, skeletal muscle, and basal metabolism. It connects through Bluetooth and can sync with Samsung, FitBit, Google, and Apple.

Pros: The scale and app are sleek and modern looking, and the app makes it easy to track metrics.

Cons:  The scale itself is small, which may be awkward for those with larger feet. 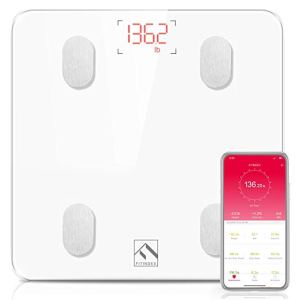