The golden age of bodybuilding — and all of its emphasis on attaining that seemingly unattainable Greek god physique at all costs — is long gone. And with each decade that passes in the fitness industry comes a greater interest in functional training — strength- and endurance-building workouts that truly enhance your day-to-day health, not slapping on “popcorn” muscles just for the beach. Of course, the world of professional bodybuilding is both admirable and still thriving in its own right. But these days, it’s more common to see guys doing deadlifts and yoga instead of bicep curls at the local gym. That kind of vanity lifting might even elicit some judgment in some circles.

We’re here to tell you, dear reader, that if you want bulging biceps, you are completely entitled to it, and should never be ashamed of it. Even if that jacked-up 80s physique is out of vogue, there’s timeless confidence that comes with shredded biceps, one that’s perfectly fine to chase. And that’s not to say biceps have no function. Picking up any item — from a heavy bag to a baby — will be easier with stronger arms.

If you’re looking for bicep workouts to build bigger arms, we’ve got you covered. The best bicep workout will tackle your biceps from all angles, employing varied grips and movements to engage the entire muscle. And, for what it’s worth, a good back workout will work your biceps too. We’ll go over a quick bicep muscle anatomy lesson, then show you our favorite bicep exercises, along with the best gear to tackle them in. 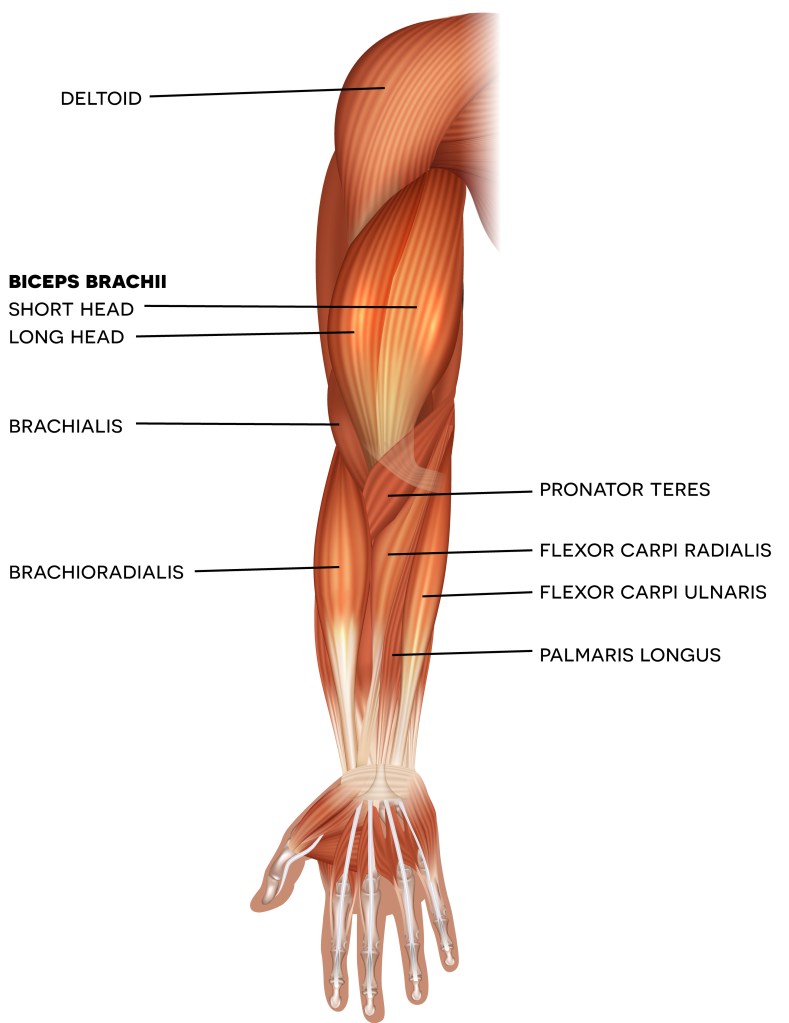 The biceps — or biceps brachii, as it’s formally called — is actually pretty simple. As the “bi” in the name suggests, it comprises two components — the short head and long head of biceps — which connect to the shoulder via two tendons, and the elbow via one tendon. Some like to think of these as the “inner” and “outer” bicep, which aren’t technical terms but can help focus your bicep workouts to strengthen each individual head.

Don’t confuse the biceps brachii with the biceps femoris, which is a very similar muscle that’s actually found in the hamstring.

If this is giving you gym class PTSD, don’t fret. The chin-up is an overall great upper body exercise but functions particularly well as a bicep workout. Unlike a standard pull-up, which you perform with palms facing the bar, the chin-up position opens up your arms to better target the biceps. It’s a great way to warm up for a bicep workout or to perform at the end of a grueling arm workout to really hammer home that bicep strength. It’s also one of the best bicep workouts that only requires your body weight. Even if that’s too tough, many gyms have assisted pull-up machines which can be a great way to get started.

Instructions: Grab a pull-up bar with both hands and your palms facing toward you. Your hands should be about shoulder-width apart. Make sure your entire body weight is hanging from the bar, and then, with your arms fully extending, pull yourself up until your chin reaches the height of the bar. Resist the urge to use your lower body to help gain momentum. Chin-ups should be performed in a controlled, steady fashion that really forces your upper body to do the work.

Instructions: Pick up a barbell with the palms-inward grip. Place your hands just wider than shoulder-width apart. A wider grip will help target the inner bicep, while a more narrow grip will contract the outer bicep. A neutral grip should target both. Begin with your arms extended and the bar below your waist. You should actually move the bar out a bit in front of your hips for the starting position, to ensure the biceps are activated even at the bottom of the movement. Bend your arms at the elbow to lift the barbell up toward your chest, contract at the top of the movement, then return to the starting position in a controlled fashion. You don’t want to be using momentum from your back, lower body or shoulders with the bicep curl, as it doesn’t engage the bicep as much as it should.

If you’re looking to perform bicep exercises with dumbbells, we recommend the hammer curl. Of course, you can always do a standard bicep curl with dumbbells. But the hammer curl adds a slight variation that helps target the long, outer head of the bicep, along with the brachialis, a muscle that serves as a prime flexor of the forearm at the elbow joint. You can perform hammer curls standing or seated, though we prefer the latter, as it helps keep the arms isolated and prevents you from trying to generate momentum from the rest of the body.

Instructions: Seated on a bench with your back straight, grab a dumbbell in each hand and let them rest at your sides. Now, instead of the standard bicep curl movement, rotate your hands so your palms face each other. Lift the dumbbells up, bending at the elbow and contracting at the top of the dumbbell’s path, then slowly return to the starting position. You can alternate arms or do them at the same time.

The cable machine offers a great variation to standard dumbbells and barbells, as it creates steady resistance through the entire motion. Cable machines are also equipped with a number of handy tools and attachments for different grips. For a cable bicep curl, you can choose from any one of them. The standard handle is great for single-arm bicep curls, while the straight bar will more closely mimic a standard barbell curl. Bent bars shift your grip to target different parts of the bicep, and a rope attachment can do wonders for your grip strength. The video below provides instructions for the standard bar attachment, but we recommend mixing and matching as you get more comfortable with the movement.

Curl, curl, curl. As you can probably tell, the best bicep workouts will feature a number of different bicep curl exercises with slight variations. The incline bicep curl adds a bit of difficulty because your arms begin the motion at even more of a deficit. They have a longer path to travel from bottom to top. This is another great addition to the list of bicep exercises with dumbbells. You may have to opt for a lighter way thanks to the added difficulty of the incline.

Instructions: Position a workout bench at a 45-degree incline. Sit on the bench with an elevated chest to open up a smoother plane for your arms to travel. Begin with your arms hanging at your sides, perpendicular to the ground. You should try to keep your elbow slightly bent throughout the entire movement. Curl the dumbbells up until the muscle is fully contracted, then slowly control the movement back to the starting point. As you can see from the thumbnail below, it’s not necessary to get that dumbbell all the way up to your shoulder. Keep your upper arm and elbows still and let the weight travel as far as the muscle contracts.

The Best Gear for Bicep Workouts

Considering how integral the bicep curl is, can get a pretty great biceps workout with just a pair of dumbbells. If you’re looking to tackle bicep exercises with dumbbells, we recommend these adjustable dumbbells Bowflex, which consistently top our lists of the best dumbbells on the market. The adjustable feature makes them a perfect choice for a biceps workout at home, as it combines multiple sets of dumbbells into one convenient mechanism. 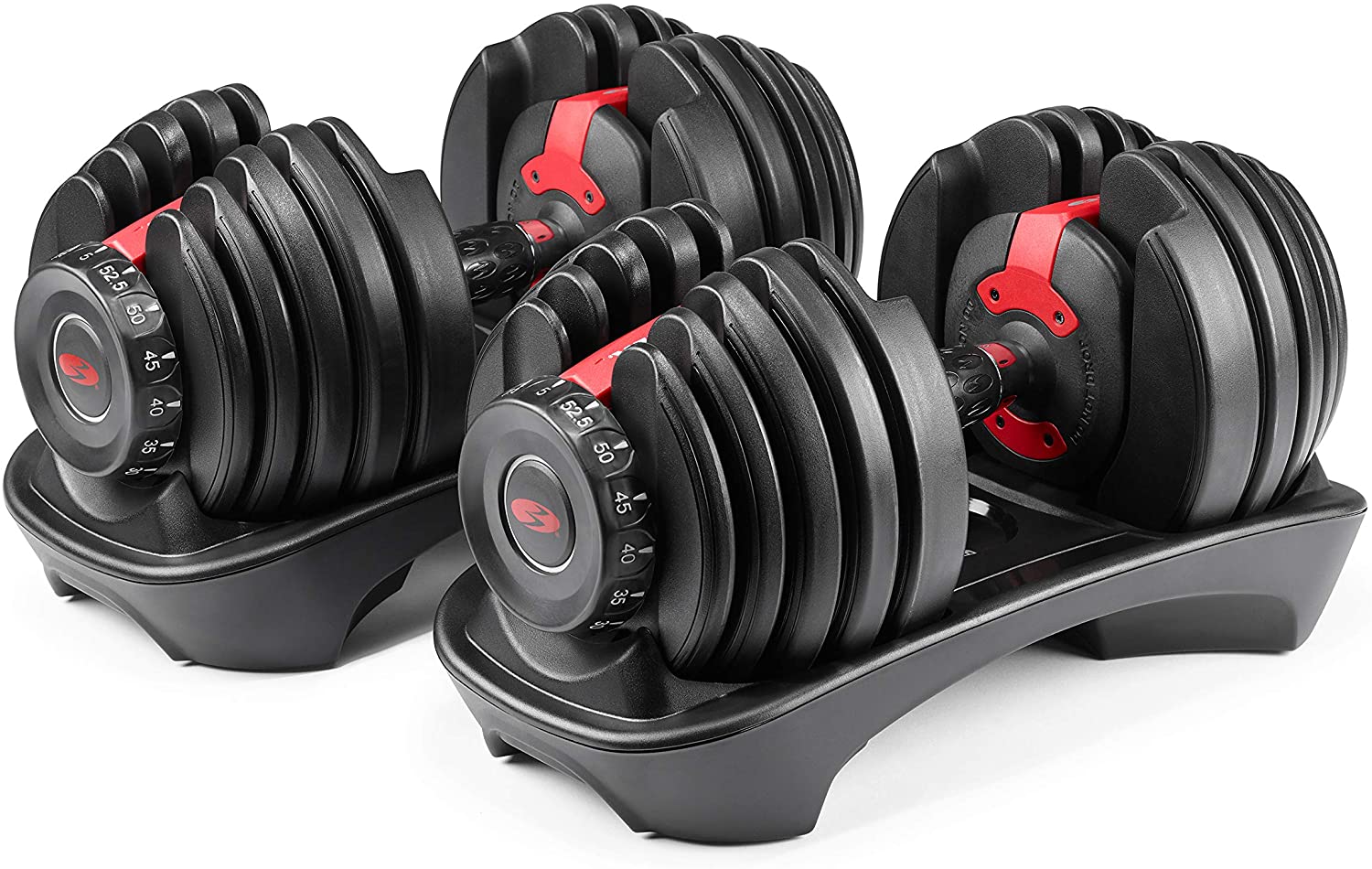 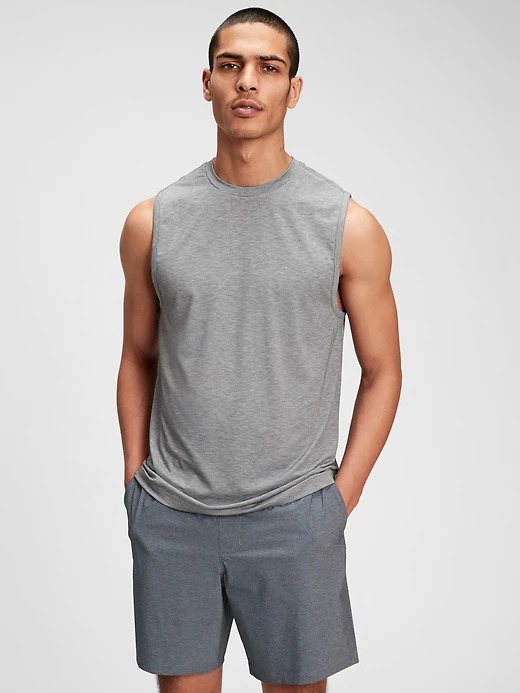 If you have the space for a complete set of barbells, check out this option from CAP Barbell, one of the industry’s strongest manufacturers of gym-ready weights. Admittedly, the adjustable dumbbell concept (though genius and convenient) does take some of the fun away from racking your weights, or quickly shifting weights if you’re trying to do supersets. CAP’s dumbbells are exquisitely crafted with knurling grips, and the included rack actually comes in bright green, red, orange and yellow options for a pop of color in your home gym. 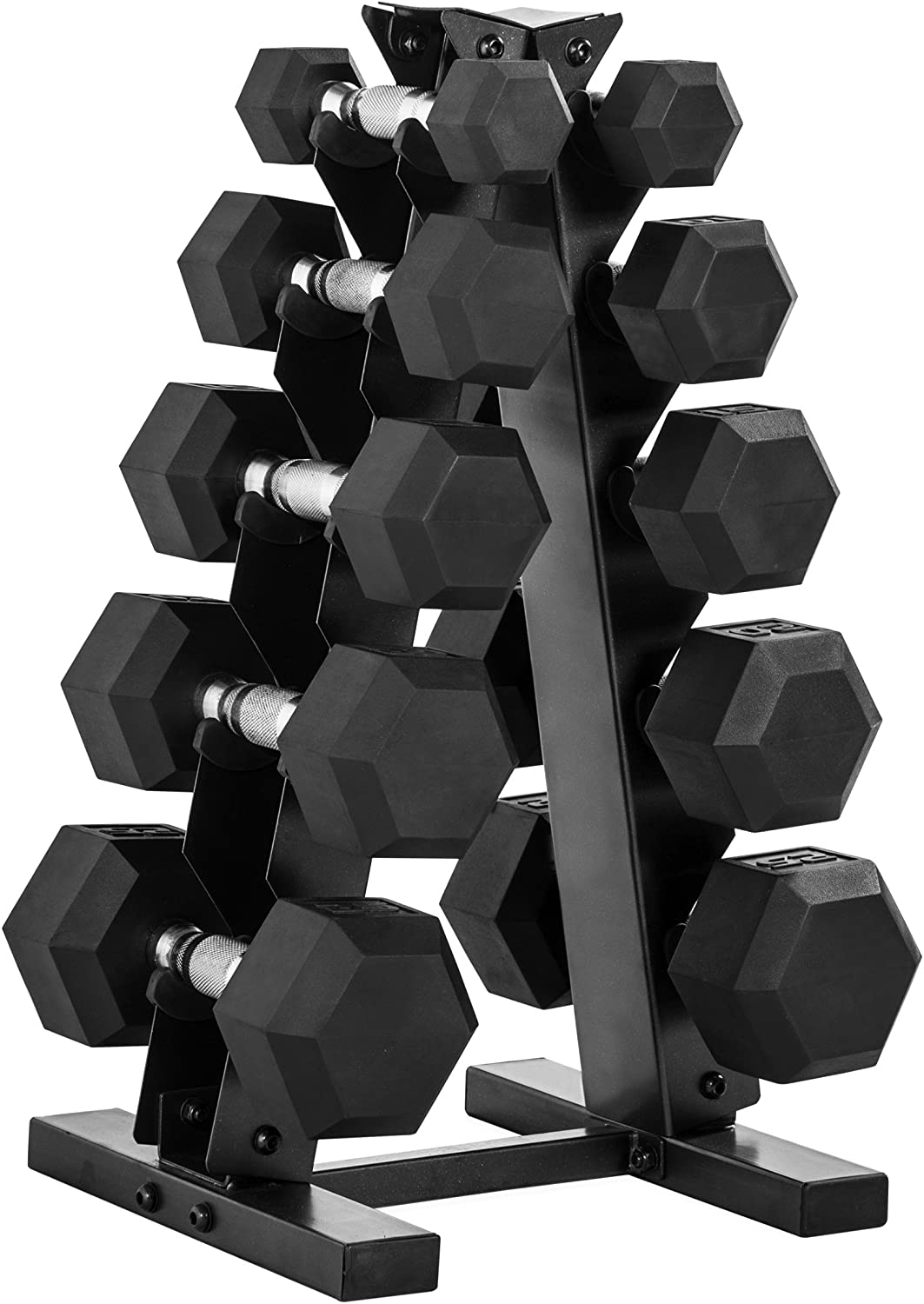 Speaking from personal experience here, a brutal bicep workout has a way of creeping into the rest of the day. All those curls can cause your arms to cramp up, particularly if you’re a morning gym-goer like me. Reaching up to brush your teeth or shampoo your hair can have deadly cramping consequences if you just spent an hour doing bicep curls. Theragun’s been leading the charge in the personal massage gun game, and its 4th generation edition has all the bells and whistles to keep your muscles relaxed and cramp-free. 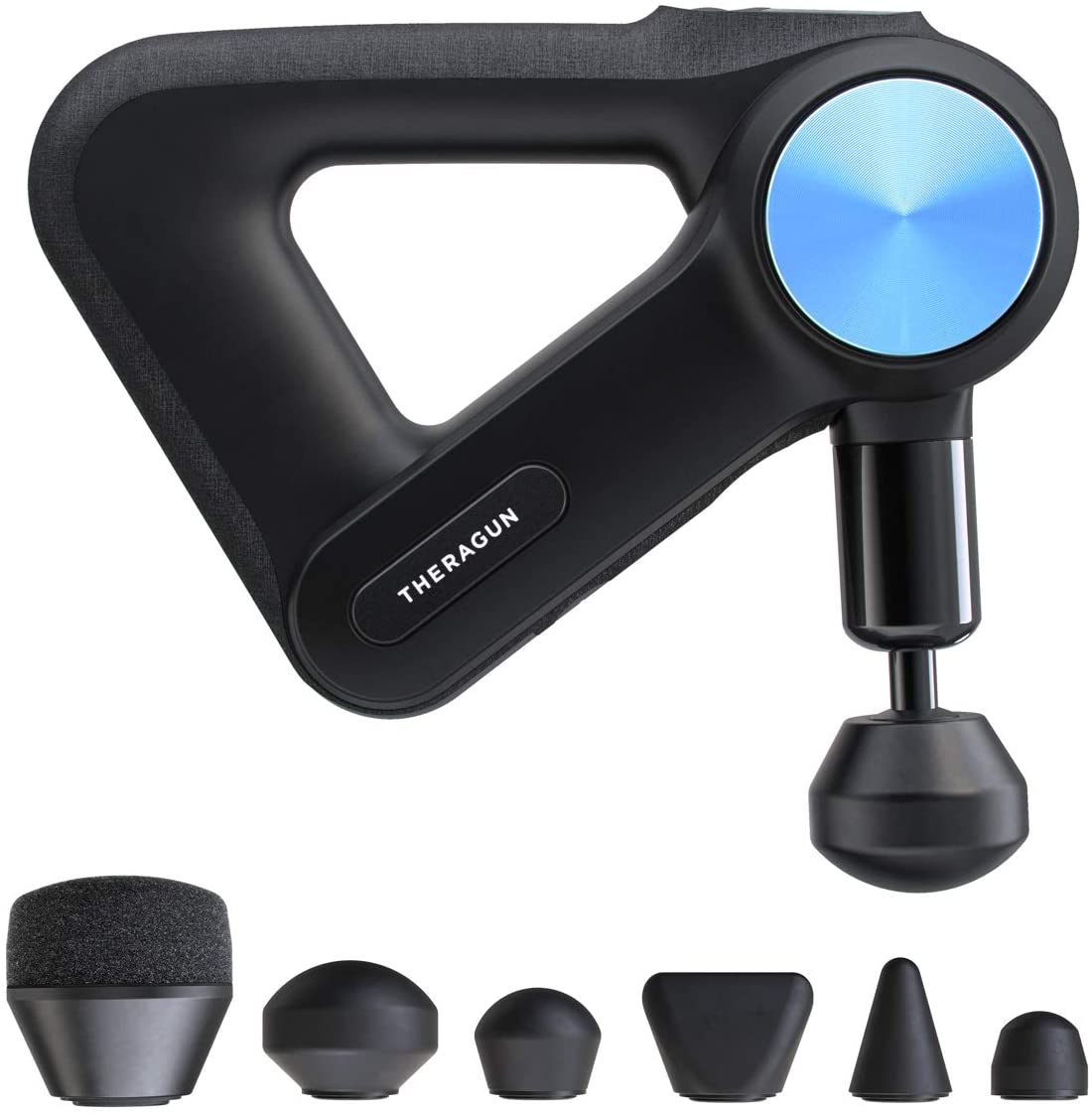