Massage guns have persisted as one of the most popular recovery and fitness tech devices of the past few years, as more brands have emerged as leaders in the space, the quality of products being solid continues to improve. At-home percussive massage therapy via something like a gun made this powerful recovery method more accessible for the average fitness enthusiast, and the portability of the tools made them even more convenient for trekking back and forth from the gym, track, pool and studio. There are two brands that dominate the space, Therabody, which we’ve extensively covered here on Spy, and Hyperice, a brand that just released upgraded versions of their top-rated massage gun the Hypervolt. 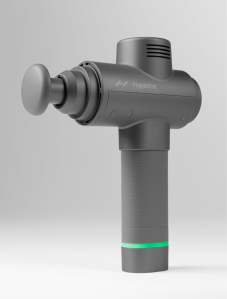 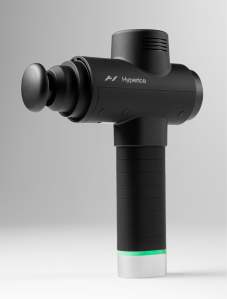 The Hypervolt 2 and Hypervolt 2 Pro massage guns were released in early September, and I was lucky enough to get my hands on two samples from the brand to try out. The original Hypervolt has been around since February of 2018, and has sized up as the only legitimate competitor to the best-selling Theragun from Therabody, the massage gun to beat when it comes to sales and brand loyalty.

I was thoroughly impressed with the design, feel and power of Hyperice’s brand new massage guns. I’ve reviewed many massage guns in my day, and these two are probably some of the highest quality tools I’ve used to help my body recover. That being said, let’s get into the review.

I reviewed both guns based on the following five factors:

I’ve reviewed each gun separately below, with some overlap commentary between the two since they’re similar in design. At the bottom you’ll find my final verdict on each gun, and my thoughts on who should be buying these massage guns.

My overall question I kept asking while reviewing these guns was how different they are from their predecessors in the field. Are they different or distinct in any way? Have they introduced a new feature or design element that’ll change how future guns are made? Are they unique enough to warrant their price tags? Keep reading to find out. 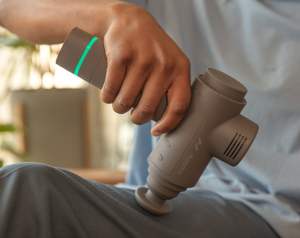 This is a super solid, well-built and well-executed massage gun. It’s got three speeds to choose from, and the first speed is powerful enough to soothe the aches and pains of the average user. The gun feels powerful, but isn’t nearly as heavy as the Hypervolt 2 Pro. I like weight to my massage gun, so this one is a tad light for me. It also only has three speeds, which is fairly limited for a gun that costs $300, however for most users that is all you’ll need.

This gun is not as heavy as I’d like it to be, but the overall design is beautiful. It’s very well made, looks great, and the LED lights along the bottom of the handle that alert you when it’s on, needs a charge, etc are a nice touch. The pill-shaped handle actually feels very comfortable to hold, and there’s only one button on the whole device that turns it on/off and adjusts the speeds, so operation is easy. I will say, though, that you have to cycle through all the speeds in order to turn the massage gun off, which is sort of a pain.

This massage gun is pretty quiet, but the Hypervolt 2 Pro seems quieter overall. It’s got a 60W brushless motor and won’t disturb someone in the next room if you’re using it. However, if you’re sitting next to your partner in bed, it might wake them up on a higher setting. Personally, I think it’s unrealistic to expect any massage gun to be whisper quiet, so I only knocked off a point.

This was the biggest disappointment for me in terms of both guns. While both of them come with a standard set of five interchangeable massage gun heads that include a ball, trigger point flat palm and more, they all feel lightweight and a bit cheap to me. They work just fine when attached to the gun, and don’t hurt to use or anything (except in the good way), but I expected more from a massage gun with this high of a price point. I’ve experienced better heads with massage guns that are half the price. The number of them and selection, though, is solid.

Is this massage gun worth $299? I’m not entirely convinced. It’s a nice gun, and will certainly get the job done, but the price seems too high for me. The Hypervolt 2 Pro is much more impressive, and if I were you, and was about to drop some serious cash on a gun, I’d pay the additional $100 for an overall better gun. 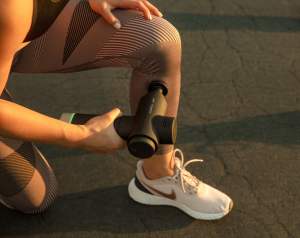 This massage gun is POWERFUL, and I mean I physically couldn’t get past the 3rd speed without hurting myself. If you’re a serious athlete or fitness professional, this’ll surely help you recover. The massage gun comes with five speeds, a perfectly adequate number for the targeted user, and each one is noticeably more powerful than the last. They all feel necessary to the overall effectiveness of the gun, and they’re super easy to switch between.

This massage gun has a great heft to it. It’s not incredibly heavy, but when you pick it up you feel like you’re about to use a professional, substantial tool that’s been designed by experts. The design is also great. It’s got a switch on the bottom, which you need to remember to flip before it’ll work, but the LED indicator lights on the handle also make it pretty clear whether it’s on or off. It’s got a fancy dial on the back that makes it super easy to switch between different speeds, a touch I love that I haven’t seen on a massage gun before. It makes it very easy to turn off, and lighten up or intensify the speed depending on which part of the body you’re working on. It’s a great feature.

This massage gun isn’t super loud or super quiet either. At its lowest speed, it’s pretty quiet given how powerful the massage feels, but after you progress to higher speeds the noise level rises beyond just a low hum. It’s not a disruptive sound by any means, but I can tell my boyfriend is using it from across the room in our apartment.

My criticism of the Hypervolt 2 follows through here as well, since the massage gun heads that came with the Hypervolt 2 Pro were the same, only black. They could definitely step it up in this area, especially since the price tag for the gun is so high. The selection is solid, and they’re easy to swap in and out on the gun itself, but the heads themselves feel cheap to me.

Don’t get me wrong, $399 is a lot to spend on a massage gun. However, it’s cheaper than Therabody’s top massage gun, the Theragun PRO that taps out at $599, and has all the bells and whistles most users need out of a luxury massage gun. This includes a 90W brushless motor, Bluetooth connectivity to the Hyperice app and Pressure Sensor Technology that can show how much pressure is being applied.

Both of these massage guns are very well-designed, and incredibly well made. Clearly, the folks at Hyperice know what they’re doing, and both will help your muscles recover faster, sore spots release quicker and help your body perform its best.

If you’re a beginner to the massage gun game, I wouldn’t recommend spending money on either one of them. Go for their cheapest gun, the Hypervolt GO, that’s more affordable and is a great starter gun for those who have never used these machines before. These guns are for folks who have used a few guns, know they like percussive massage, and are willing to make a more hefty investment.

Overall, if your budget for a luxury massage gun is in the hundreds of dollars, I’d go with the Hypervolt 2 Pro and pay the extra $100. You get more bang for your bucket, a better gun overall, and it’s still light enough to bring with you wherever you need it.

Intimidated by Massage Guns? Here’s How to Use One Effectively