The fitness world has gone through many different phases. There was the jazzercise era of the 1980s and 1990s and the yoga craze of the early 2000s. Of course, the ongoing cycling fever has fully captured yours truly, and at-home fitness has become the norm post-pandemic. This has fitness writers and enthusiasts like me wondering — what could be next? What’s the next device, workout style or activity that’s going to sweep the nation? Makers at MIRROR, NordicTrack, Tempo and now ProForm seem to think fitness mirrors are it. I’m not so sure.

Fitness mirrors have become more popular during the past few years as convenience has trumped community, and more fit individuals than ever before are looking for the experience of a high-end boutique workout at home. You can run on a treadmill at home and participate in a running class, get a boutique cycling workout on a spin bike, but you can’t get a full-body strength workout, pilates session or barre class with any of those machines. You can, however, do all of this and more on a fitness mirror.

A fitness mirror takes a personal trainer and hands-on fitness instructor and puts them right in your home, in front of you, leading you through exercises while you gaze upon your form in the reflective surface. It’s as close as you can get to an actual HIIT, barre or pilates class in your living room that’s not streamed from a phone or iPad, and for that reason, it’s worth considering if you love this type of exercise.

I got a chance to review ProForm’s Vue fitness mirror for 60 days, and my experience with it was mixed. You can read my full review below. 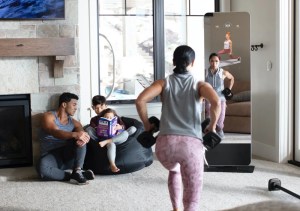 The ProForm Vue mirror stands five feet tall and comes with a twenty two-inch smart HD touchscreen display from which you can stream, select and rate classes. It’s a large device that’s about as thick as a flat-screen TV and has racks on the back for storing the dumbbells, weight plates and bar that comes with it.

Along with your ProForm Vue mirror, you receive:

The mirror has a solid base that it stands on, and the whole mirror can pivot from side to side and move with you throughout the class. It also has two three-inch speakers located on the front, so crystal clear audio from your classes comes through, and it’s got Bluetooth compatibility so you can connect your desired headphones as well.

ProForm’s fitness products, like NordicTrack’s, come loaded with iFit, the app that houses an entire library of running, cycling, strength, yoga, HIIT, barre and other classes. They’ve got global workouts where you can virtually train in famous international destinations, and classes with famous athletes, world champions and Olympians.

It’s a lot like Peloton’s app in that it offers courses of varying lengths and difficulty levels, and you can stream it anywhere. It does require a subscription, but once you subscribe you can access it on any iFit-enabled equipment from NordicTrack, ProForm etc, or on your smartphone, TV or other device. It costs $180/year for an Individual Yearly Plan, or $396/year for a Yearly Family Plan. There’s also a Monthly Individual Plan of $39/month.

The ProForm Vue is heavy, so it took two people to get delivered. I’d plan on having a friend help you lift it out of the box and set it up where you want it. The barbell, dumbbells and weight plates all fit neatly on the back of the mirror, so the actual device itself does not take up a lot of floor space. It does, however, require space in front of it for doing the workouts successfully. I’d recommend about a five foot by five foot space, or the amount of room it takes to spread a yoga mat length and width wise.

I’d make sure you can take a wide step forwards, backwards and sideways, and spread your arms out lengthwise and above your head. Since the iFit HIIT workouts can involve anything from side lunges to jump squats and mountain climbers, you’ll definitely want a lot of room to get things done. 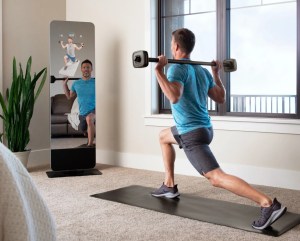 ProForm Vue Review: What I Liked

During my two months of testing the ProForm Vue, I worked out with it one or two times per week and tried out their strength, HIIT, yoga, pilates and barre classes. I liked all of them and found the instructors to be very clear, energetic and talented at what they do. The classes were enjoyable, and all of them were good workouts.

The Vue, and presumably all fitness mirrors due to their design, make it very easy to see what the instructor is doing. On ProForm’s fitness mirror, you don’t have a lifesize version of the instructor in front of you, but they do appear larger than they would be on a phone or iPad. They are, however, smaller than they would be if you were streaming iFit to your television screen if you’ve got a large flat screen in your living room.

One thing that surprised me was that the instructor and streamed class did not take up more of the mirror. Roughly less than one-third of the mirror’s surface is the screen, which looks a little awkward when it’s turned on. I imagine the purpose of this is to give you more room to look at yourself and correct your form during class, which is helpful.

I didn’t find the included exercise equipment to be entirely necessary. I already have a barbell, weight plates and dumbbells that I use regularly, so I picked up those instead of the equipment they provided. If I didn’t already have these things, ProForm’s version would’ve definitely sufficed for the workouts.

The classes do look a little strange on the mirror. The instructor seems more like a hologram and is slightly translucent on the Vue rather than a video of someone in a studio that you can follow. Their image and your reflection of your form merge together in front of you, which makes sense in theory because you want to make sure you’re doing all the movements correctly. In practice, however, it feels a bit like a dystopian experience. I have to say I prefer just streaming an instructor to my television.

Each class also starts with a 3-minute “warm-up” period that isn’t guided, but rather a countdown on the screen during which, I assume, you’re supposed to warm up yourself. I appreciate that it gives you the freedom to warm up, stretch, and move in the ways you like, but it didn’t feel particularly motivating.

I also found the search functions within the iFit app to be far less intuitive than the Peloton app and found that many of the classes had strange lengths like 16 or 28 minutes. This is presumably an estimation because the class uses reps instead of time or is factoring in a cool down, but it was confusing since I’m used to fitness classes being a rounded number like 15, 20, 30 or 45 minutes long.

Overall, I liked but didn’t love my experience with the ProForm Vue. I’m a fitness enthusiast who has a routine she already loves, and I had a hard time dedicating time to testing this product since there are other machines I have at home that I prefer: mainly the Peloton bike and Fight Camp punching bag. You can find both of my reviews of those live on Spy.

If you’re curious about fitness mirrors, it is a very well-built machine, and iFit’s class library is very impressive. A fitness mirror would be a great option if you love HIIT and strength above all else and want a piece of fitness equipment designed to double as a piece of furniture. The surface is very reflective even when it’s off and works great as a mirror in my living room before I head out the door.

However, suppose you’re not totally sold on either of those exercise modalities. In that case, I think your money is better spent on a bike or treadmill that comes with an app where you can do strength and yoga classes in addition to the movement the machine is designed to do.