Dwayne “The Rock” Johnson is arguably the most lovable wrestler turned actor turned strength and fitness guru out there, and thanks to his line of ProjectRock workout gear with Under Armour you can use what he uses in the gym to stay in shape professionally. He has t-shirts, tanks, bags for schlepping your gear from place to place and training shoes as well, a brand new iteration of which officially dropped on September 3.

Game changers 👟🔥 The next evolution of bad ass @projectrock @underarmour training shoe arrives THIS THURSDAY! Innovation. Performance. Edge. Designed by me – put to work by you. #PR3s DROPS THIS THURSDAY 🔥👟👊🏾 @jonbrandoncruz 🎥

The shoe was originally supposed to drop on August 27 but the brand pushed it to September 3. While we don’t know exactly the reason for the delay, the Rock recently shared that he and members of his family have tested positive for COVID-19.

Despite the surprising news, the Rock announced on Instagram earlier this week that the updated version of the PR training shoes, PR3 training shoes, would be released on Thursday, September 3. His line of gear and philosophy toward physical fitness in general is all about going “through the work” rather than avoiding it with excuses, and these shoes will make sure your feet are taken care of so you can do just that.

Next evolution of bad ass training shoe arrives THIS THURSDAY 👟🔥 I’ve been working on these for a year and pumped to deliver my NEW PR3s. @underarmour’s #1 seller. Innovation meets sweat equity. Engineered for the hardest workers in the room. Drops THIS THURS! #ProjectRock #UnderArmour #PR3s

The shoes are available to purchase in the Project Rock section of the Under Armour website along with the previously released PR2 training shoes.

The PR2 and PR3 shoes feature Under Armour’s HOVR technology, which is designed to eliminate impact on your joints. The soles are designed to provide maximum support and traction while lifting weights, and the unique lacing and knit bootie construction provide an extra secure and comfortable fit. The best men’s weightlifting shoes provide support without slowing you down, and these shoes were designed to help guys reaching for that next personal record. 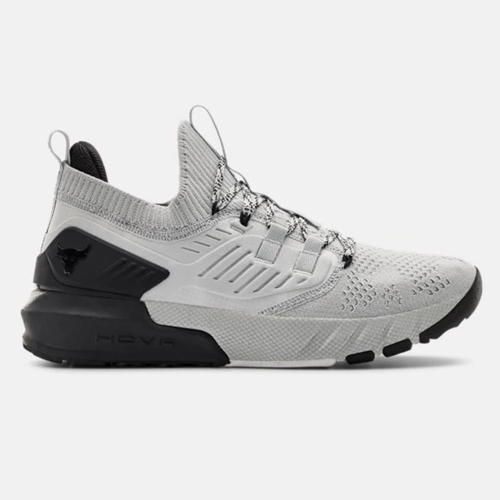 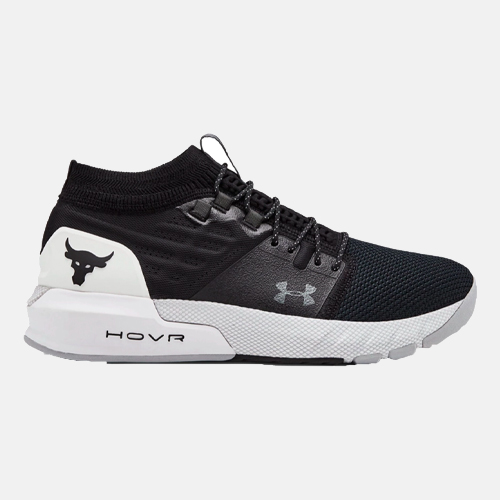 Courtesy of Under Armour
Buy: Under Armour Project Rock 2 Training Shoes $140.00
Buy It
Our Favorite Pieces from The Rock’s Latest Collab With Under Armour