* It’s been 10 years since the Shake Weight made its debut
* One of the best-selling fitness products in the nation
* Inspired spoofs from Saturday Night Live, The Daily Show and South Park

Hitting the infomercial airwaves in 2009, the Shake Weight quickly became one of the hottest-selling fitness products on TV. The Shake Weight is a lightweight dumbbell with springs on both end that’s designed to be held with one or both hands and shaken back and forth vigorously in a limited range of movement to work the arms. Now that you’ve gotten that visual in your head, it’s no surprise the amount of jokes, memes, GIFs and spoofs Shake Weight has inspired over the years. 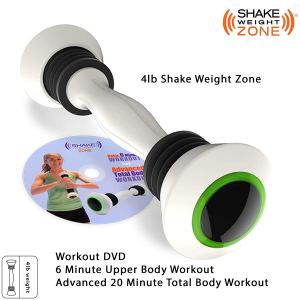 Shake Weight infomercials have cemented themselves in the pop culture hall of fame primarily because viewers find the models’ use of Shake Weight as sexually suggestive. Saturday Night Live, The Daily Show, even South Park, have taken a turn at doing risqué Shake Weight spoofs. With all that attention, it’s made Shake Weight one of the best selling fitness products in the nation.

It’s been 10 years since Shake Weight took the world by storm and it’s making an unexpected come back. The new version, dubbed the “Shake Weight Zone,” features a light at the tip of the device. Bio-feedback sensors cause the LED rings to change colors from green, to orange, to red as intensity levels increase. The harder you shake it during your workout, the better. It’s never been easier to monitor your progress.

Recent reviews on Amazon praise how easy it is to break a sweat even if it’s just a quick 6-10 minute workout. Some users love how fool proof it is: they can tone their arms without needing to wonder “am I doing this right?”. Others appreciate its lightweight and mobile design so that they can workout anytime, anywhere.

If you’re looking to shake up your fitness routine, the Shake Weight might just be the workout companion you’re missing. Gift one for yourself and a workout buddy—and get the shaking.

The Ultimate SPY Guide to Workouts