Work is inherently part of working out. That may seem cliche or route, but any sort of physical exercise involves exertion of some form or fashion. Yet, it can be easy to overlook effectively taking care of yourself in the wake of this effort, leading to further injuries. Stretching helps, sure, but new technology from companies like Therabody has made it possible for everyday athletes to receive pro-level care — and few do it better than them. Their latest revolution? The RecoveryAir and RecoveryAir Pro Devices.

They’re both great, and the SPY team has gotten a chance to review both devices for their design, ease of use and overall effectiveness when it comes to easing muscle soreness and aiding recovery. Below you’ll find our RecoveryAir review, which we initially did in June of 2021, as well as an updated review of the RecoveryAir Pro System, which we completed in October of 2021.

The RecoveryAir is Therabody’s entry into compression therapy. The medical-grade, space-age-looking boots are designed to help reduce muscle fatigue and inflammation. The RA also increases your overall circulation through “clinical pneumatic compression,” which is just a fancy way of saying the boots inflate and deflate around your legs to increase circulation, which speeds up recovery. What does that mean for you? Your muscles are overall less achy, making you ready to get ready to attack that next workout with as much tenacity as you did the first time around. 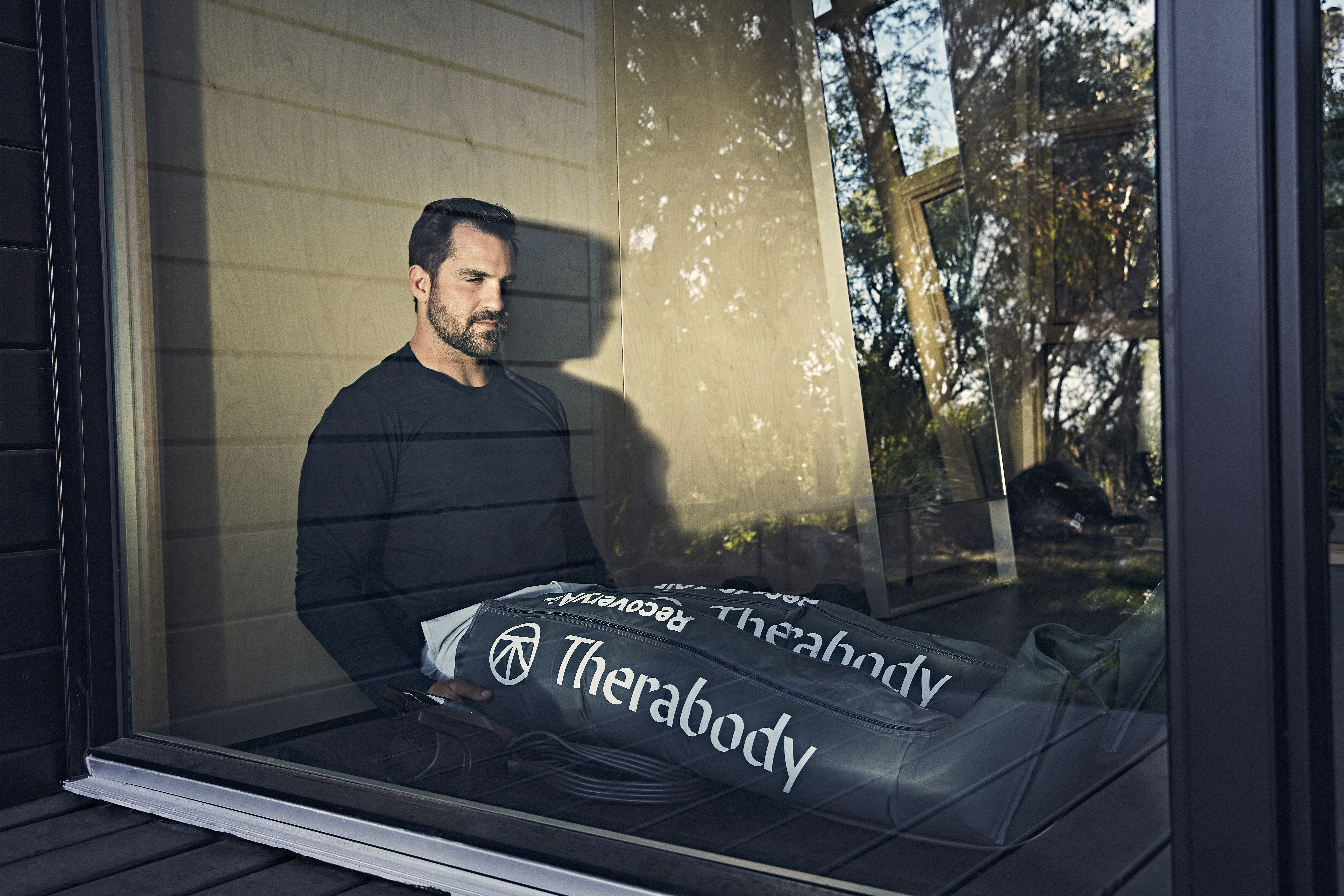 The RecoveryAir is easy to use. Inside the box are the two boots and the centralized control hub. The boots are wired and then feed into the base itself. Putting on the RecoveryAir is simple, as you’ll place the boots over your feet and legs and zip them up, almost like a sleeping bag for your legs, and then plug them into the base, where you can set the pressure and overall session length. The boots then start to slowly fill and empty with air, encouraging blood flow while flushing out bad stuff like lactic acid.

The RecoveryAir is meant to be an inherently relaxing process, so I would typically set it up on my couch while watching TV. The initial compression and depression felt a little strange, but it does make a massive difference in terms of relaxing your leg muscles after a few minutes. Even a quick and simple 15-minute session did wonders for me after a run. The RecoveryAir also made my next exercise easier than it would have been otherwise, making it a holistic product in terms of providing pre and post-care.

The biggest knock against the RecoveryAir is its price. A lot of exercise equipment, recovery or otherwise, can get expensive quickly. For $699, Therabody asks a lot for this (it’s $100 more expensive than their Pro model Theragun), which might be a turnoff for some. Weekend warriors might not see the value in something they’re only using every once in and while. Still, if you’re constantly training and need something to boost your recovery process, the RA is going to feel like an absolute game-changer.

One thing that’s also good to know out of the gate is that you’ll need plenty of room to spread out. Again, using it on the couch ended up being my best option, but it’s something to keep in mind when considering how and where you’ll use it.

The Verdict: The Therabody RecoveryAir Will Change How You Recover

The RecoveryAir truly is a wonder. It’s a piece of equipment that exceeds its potential, resulting in something extraordinary. Once you’ve used the RA, it’s hard to go back to using anything else, as you will genuinely feel a demonstrable difference in how you approach your workouts. Believe the hype. 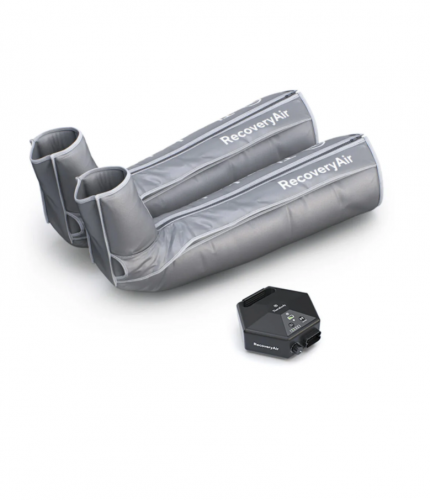 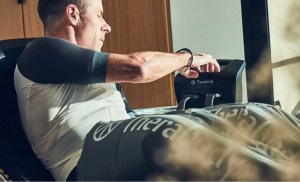 Since the RecoveryAir’s initial debut, Therabody has made some improvements to the machine, including adding other compression garments designed to help parts of the upper body recover. Spy E-Commerce Editor Taylor Galla, who’s reviewed many high ticket fitness items from the ProForm Vue Fitness Mirror to the FightCamp punching bag, got a chance to try out the RecoveryAir Pro pneumatic compression system, and loved it. It’s about twice as expensive as the original RecoveryAir, but has some notable improvements worth mentioning.

We reviewed the Therabody RecoveryAir Pro system using the following criteria, which we deemed most important for a high-ticket recovery item like this one:

We assessed the RecoveryAir Pro system on whether the design feels worthy of a $1,200+ price tag (spoiler alert: for some, not all), how easy it is to use (very), how practical it is for the average user to use on a daily or weekly basis and how effective it is at decreasing muscle soreness and helping the body bounce back. You can find our full review below. 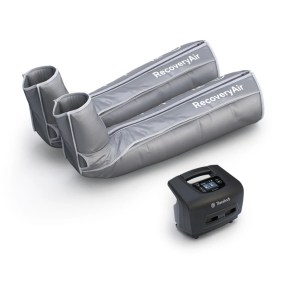 Therabody RecoveryAir PRO: What We Liked

The RecoveryAir PRO System is super easy to use, and the whole apparatus has a high-quality design that I was excited to use as soon as I opened it. Similar to the RecoveryAir above, the setup comes with the central RecoveryAir PRO pneumatic device console and two large compression boots for your legs. The boots do feel like individual sleeping bags, and make me feel like I’m an astronaut getting ready for liftoff every time I put them on.

The compression boots connect to two large hoses that plug into the console where you can set your pressure and length of session. It’s very easy to setup, and the console comes pre-programmed with a default option for pressure and time which I’ve used for almost every session, 50mmHg of pressure for 30 minutes. The 30 minutes flies by while I’m watching television, reading or getting some work done, and it feels super satisfying to be actively recovering while you’re sitting on the couch.

The RA PRO comes loaded with five guided treatment programs that can all be extensively customized, from a warm-up option to an isolation mode for hitting a certain part of the body. The system syncs up with the RecoveryAir app which, while being a little glitchy, is handy for planning your recovery.

The leg is split up into four different zones within the compression boot, which makes it easy to target a certain zone, or adjust the cycle pattern and pressure in increments as little as 1 mmHg. I really liked being able to just focus on my glutes or hamstrings, as I’m a cyclist and those areas tend to get the most sore.

In terms of effectiveness, I found the RecoveryAir PRO to be extremely effective in helping me recover. I cycle and lift pretty much every day of the week, and the machine definitely helped my body feel less sore and bounce back into the next workout far easier than when I just stretch or foam roll.

I will say that while using the RA PRO is supposed to be a relaxing experience, it’s not as zen as a yoga stretch class or epsom salt bath. Your legs are being squeezed, sometimes pretty hard, by what feels like two huge balloons that are inflating and deflating at regular intervals. You’ve got to wear the right clothing, otherwise things can get folded and become uncomfortable, and I found myself needing to adjust a few times so my feet wouldn’t cramp. You definitely get used to it, and being able to lie down and recover is convenient, but for the average user the experience will probably seem strange at first.

My second hold-up is how practical this is for the average consumer. Sure, I’m a super active, childless woman who lives in an apartment with plenty of storage space, so using this type of device is easy. If you’ve got a family and young children, the idea that you’ll have the time to use something like this on a regular-enough basis to justify the price tag seems far fetched. Speaking of, the price is also pretty impractical for the average consumer.

Don’t get me wrong, this is an impressive piece of recovery equipment and the technology they’ve implemented into a device that’s VERY easy to use is incredible. But, I’d say it’s still within the echelon of high-end fitness equipment that professional athletes and very athletically-motivated members of the public will use, rather than a go-to device for the average American household.

At first glance, the two systems seem very similar, and they are in terms of the overall goal. Both of them consist of a central console that controls the pressure of the compression boots, and both come with two pneumatic compression boots designed to help stimulate blood flow, reduce muscle soreness and speed up recovery. It’s safe to say, at this point, that both systems do that.

The RecoveryAir PRO System is almost twice as expensive, though. Why? Both systems have the same pressure range of 20-100 mmHg, and both come with boots made with a hygienic design and four internal overlapping chambers that work their way towards the heart as the compression sequence proceeds.

While the original RA system gives you the option to control your pressure and monitors the pressure relative to the size of your limb to prevent over constriction, something that’s counteractive to recovery, the RecoveryAir PRO allows you to customize your program even more. It also comes with those five guided programs and offers different recovery modes including focus pressure, interval mode and more.

Otherwise, both systems are essentially identical.

For the average fitness and recovery geek who works out all the time, the RecoveryAir is worth investing it. If you compete in cycling competitions, run marathons or are always looking for the next physical mountain to climb, this system is going to help you bounce back better and compete at a higher level.

If you’re a professional athlete, the RecoveryAir PRO is a finely tuned system that’s very well-designed, performs impeccably and will also serve you very well. The ability to customize your recovery routine down to the precise body part and pressure level is not something the average person needs, but if your body is your meal ticket that’s a different story.

I’d recommend the RecoveryAir system for most active individuals looking to invest heavily in recovery, and the RecoveryPRO to those who’ve made movement a career path.

The Best Massage Guns and Theragun Alternatives of 2021