When it comes to the male part of having safe sex, things are pretty straightforward. If you want to avoid the transmission of sexually transmitted diseases and lower your chances of creating a baby, wear a condom. It’s that simple. But, for some men, it isn’t quite so simple, as donning a standard latex condom can sometimes result in unpleasant allergic reactions for either participant in the sexual encounter. We’re talking about a latex allergy. Luckily, this problem is easily navigated. There are plenty of latex-free condoms on the market.

How Do I Know If I Have an Allergy to Latex?

It’s likely you already know if you have an allergy to latex. However, if you’re experiencing general discomfort after latex condom use or have some of the symptoms below, it may be worth consulting a medical professional to get tested. You might also consider switching out your regular condoms for the latex-free options to see if it makes a difference. Some common latex allergy symptoms include:

Beyond this, less common symptoms may also include things like sneezing, an itchy throat or some difficulty breathing. If you experience these symptoms, it’s definitely best to consult your physician in order to review your symptoms and address the situation.

When choosing a condom for your nights of passion, there are certainly a lot of options. Like standard latex condoms, it’s possible to add an extra flavor (quite literally!) to your one-on-one sessions by picking a condom with something a bit more than the everyday option. Different types of condom include:

Below you’ll find eight of the best non-latex condoms for enjoying safe sex without the worry of redness or itchiness after the good stuff. There’s something for everyone, from original-style condoms to ribbed options.

SKYN is king of latex-free condoms, and in the brand’s SKYN Selection Non-Latex Condoms Variety Pack, you’ll get to experience the very best they have to offer. The 24-pack is made up of three different condom styles, including 10 original condoms, six extra-studded condoms and eight extra-lubed condoms. The extra-lube condoms include 40% extra slick stuff compared to the original style, while the extra-studded condoms sport lines of raised studs to further stimulate pleasure during use. Additionally, each condom is individually packaged, and styles are color coordinated for easy identification. 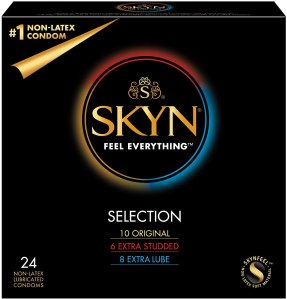 At under $10, these Durex Avanti Bare Realfeel Non-Latex Condoms are a budget-friendly answer to enjoying safe sex. In this Durex multipack, you’ll find 10 individually wrapped condoms that are made from polyisoprene. This compound delivers a ‘real feel’ during use. They’re also traditional condom-shaped and include a pleasant-smelling lubricant for greater comfort. If you’re looking to enjoy more than 10 rounds, these condoms also come in a larger, 24-piece pack. 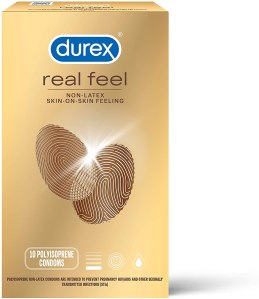 If you’re searching for the thinnest possible wall between you and your partner, you’ll definitely want to consider these Trojan Supra Non-latex Bareskin Condoms. Branded as “America’s Thinnest!” you’ll find six individually wrapped condoms made from polyurethane in each pack. This compound offers the ideal protection for latex allergy sufferers, so you’ll see it in many of the condoms on our list. For added comfort, each condom is covered in a silky smooth lubricant, while the reservoir end in the design helps to reduce the likelihood of experiencing a split or tear during use. 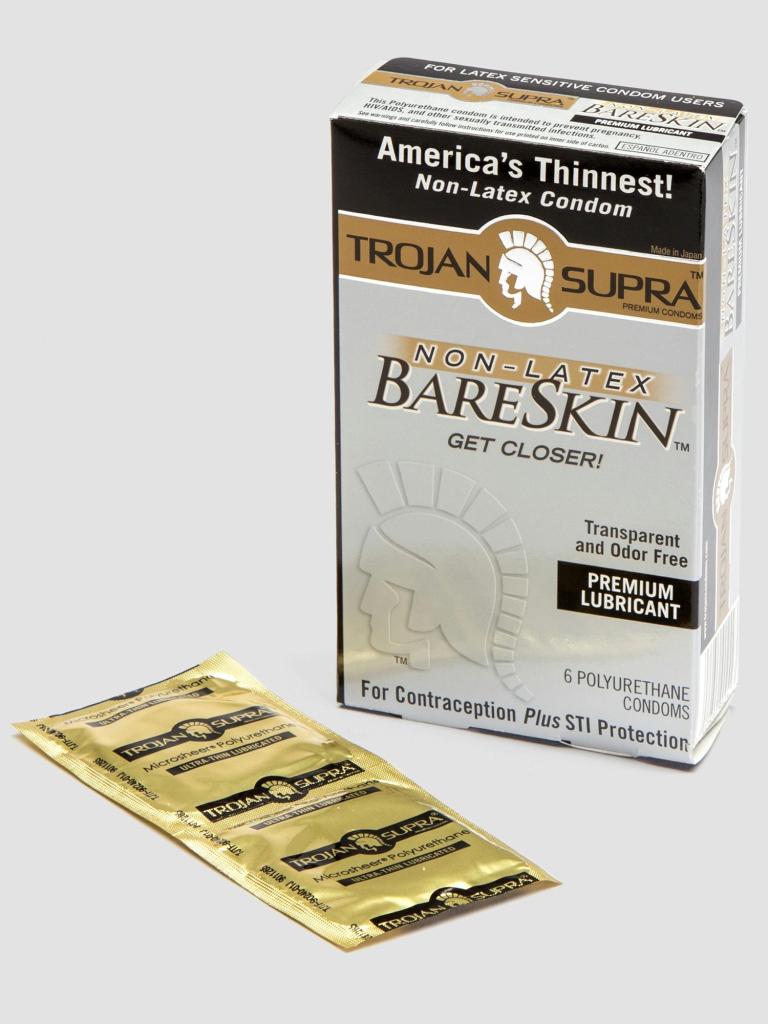 The Trojan Naturalamb Latex Free Lubricated Condoms are luxury condoms that are free of latex and offer a skin-to-skin-like feel. The water-based lubricant used on the condoms provides additional comfort. Inside this pack, you’ll find three condoms that have been individually tested for reliability against pregnancy. However, it should be noted that these condoms do not protect against STD transference. 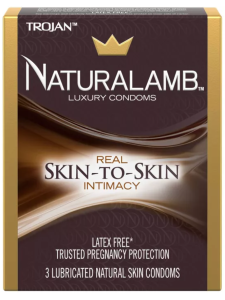 Just because you’re using latex-free condoms, that fact doesn’t exclude you from enjoying a tastier time during sex. This multipack of SKYN Cocktail Club Premium Flavored Condoms comes with three different flavors in the form of pina colada, passion daiquiri and cherry sunrise for a sexual experience that won’t leave a bad taste in your mouth. Each condom is individually wrapped, natural in color and sports a straight shape with a smooth texture. 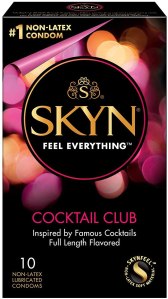 If you often find yourself struggling with excess friction during sex, you may want to consider condoms with added lubricant, like these SKYN Extra Lubricated Non-Latex Condoms. Each individually-wrapped condom includes 40% more lubricant than the average condom choice to deliver a more comfortable and natural experience. Not to mention, this also decreases the likelihood of tears or splits. As this pack includes 12 pieces, it’s a great option for anyone looking to restock their prophylactic supplies. 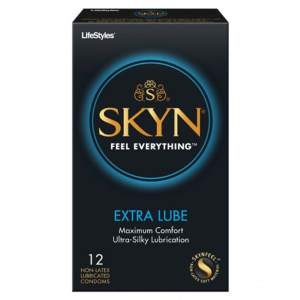 With over 5,000 five-star ratings from users, the only thing which stopped the LifeStyles SKYN Original Condoms from claiming first place was its lack of variety. After all, variety is the spice of life. Each condom in this 24-pack is made from polyisoprene, offers the strength of premium latex and comes individually wrapped in a jet black packet for an inconspicuous appearance. Furthermore, these naturally colored condoms also feature a coating of long-lasting, ultra-smooth lubricant for greater comfort during use. 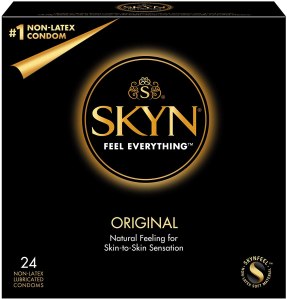 If your jean’s pocket or the back of your wallet don’t really appeal as a storage place for condoms, you may want to invest in this classy Lifestyles SKYN Large with Brass Lunamax Pocket Case Set. It comes with a compact brass travel case that can hold up to two condoms at a single time for a convenient and secure way to carry your prophylactics. The set also includes 12 large SKYN condoms, which offer greater comfort, especially for the more well-endowed men out there. Plus, the condoms are made from a specially formulated non-latex material which offers that like-having-nothing-on feeling. 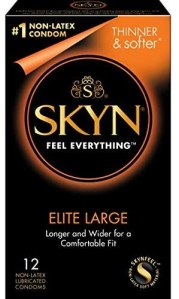 The Highest Rated Condoms for Her Pleasure