First, let’s take a moment to clear up and put to bed any feelings of shame or stigma you might have about exploring this unfortunately taboo topic. Being curious about and using sex toys, including sex toys for men, is totally typical and utterly commonplace. The truth is that if men — that means you and also your friends — weren’t interested in high-tech sex toys, companies wouldn’t be racing to make them. But don’t take our word for it: According to PR Newswire, the global sex toy market is expected to reach $52.7 billion by 2026, with much of the growth expected to be spurred by technology-driven sex toys.

Only a few years ago there were just a few janky machine options in addition to traditional hand-held sleeves, but the sex toy market has moved quickly over the last few years to deliver higher-end, more technology-oriented sex toys for men.

How Do VR Sex Toys Work?

VR is at the helm of tech innovation in the world of sex toys. While it was previously thought of as impossible, you can now put on a pair of goggles in the comfort of your own home and have a truly immersive experience that lets you play out your wildest fantasies like never before. But how exactly do these VR sex toys work?

Ultimately, while there’s no hard and fast definition to the common Google search of “what is a VR sex toy,” it’s some combination of automatic masturbators and a video headset to stimulate as realistic of a sexy experience as possible — some toys are just more immersive than others.

Most VR-compatible sex toys are paired with virtual reality goggles, allowing for a hands-free experience that most Bluetooth-only toys can’t provide.

How To Use A VR Sex Toy

The most popular headset brands are Oculus and the HTC Vive. One of the most affordable VR headsets is the Play Station VR system, or PSVR, which nearly all these VR sex toys are with.

Sites to Use Your VR Sex Toy On

Isn’t the internet a beautiful thing? there are currently plenty of interactive choices for you to use with your VR set while jerking off. According to satisfied customers, top picks include:

VRB Gay: if you’re on the hunt for content specifically for gay users, this site has something for bottoms, tops, and everything in between.

All the sex toys below work roughly the same to some extent. They all feature some kind of sleeve and enclosure for insertion and then that enclosure can vibrate or move to simulate the feelings of sex or oral sex. They all also tend to feature motors and mechanical parts to function, and as a result, can be somewhat loud.

Where To Buy VR Sex Toys

While there are tons of VR sex toys available online, your local sex shop might not have the options that you’re looking for. Shopping online at one of our vetted retailers allows you to choose between male masturbators, vibrators, and a generally wider range of options for your kink-specific needs.

Start your search at trusted websites like Lovehoney.com (they’re basically the Amazon of sex toys with their wide selection) as well as retailer-specific sites heading the VR sex toy industry, like KIIROO.

Kiiroo has been on the cutting edge of interactive sex toys for women and men in the last few years. One of its latest offerings, the Titan VR Experience, promises an intense, interactive stroking experience.

Except for the addition of vibrating bullets, the Titan appears pretty simple at first blush. You’ve got a grippy enclosure, check, a real-feel sleeve, check, and touch-sensitive pads to control the vibration.

But a few other factors make the Titan VR Experience enticing. It is one of the above-mentioned devices that can pair with a partner’s device, in this case, Kiiroo’s vibrators, the Pearl2, the Cliona or the OhMiBod Fuse, which makes the Titan great for long-distance couple’s play. When the two devices are connected, those touch-sensitive pads will control the speed and intensity of vibrations for your partner for a mutually intense and pleasurable experience that’s a notable improvement over phone sex.

But the offerings for solo use are just as enticing too. The Titan VR Experience also ships with a smartphone-based VR headset and you can use the headset or just your smartphone to connect to over 4,000 interactive videos in VR or 2D as you please.

Kiiroo even throws in some toy cleaner and lube for your benefit too, so you’re ready to play right out of the box. 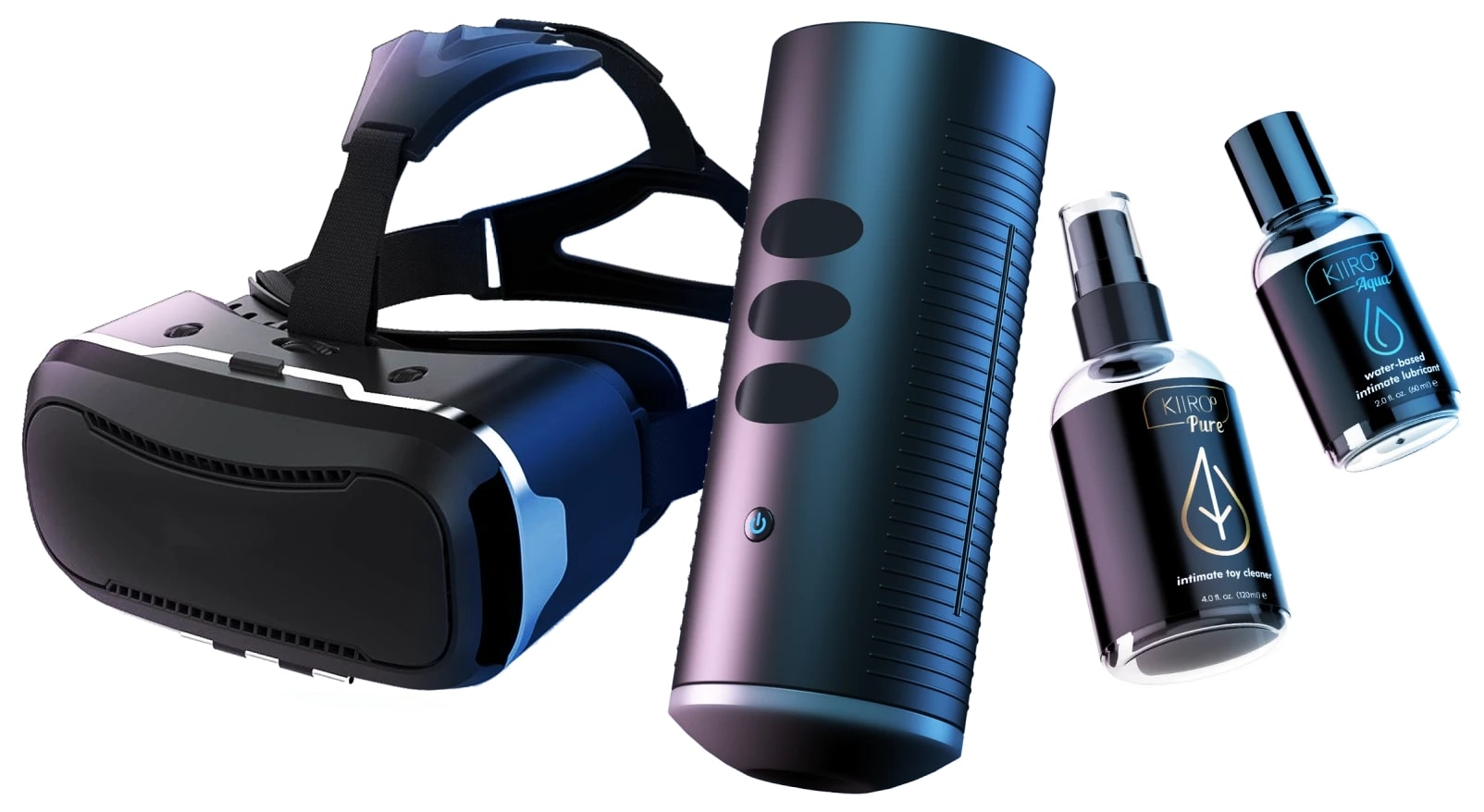 The Lovense Max 2 is one of the better, cheaper VR sex toys out there, but it’s surprisingly feature-full despite its under-$100 price tag.

First, what it doesn’t do. This device is not a stroker, so it has no components that move up or down, meaning you’ll have to do all the movement. It also has limited VR options in that you can only use this device to synchronize to the MirrorLife VR sex game, which features 3D computer-generated models as opposed to real people.

The Max 2 doesn’t need to be plugged in to function, which is great for portability. It’s also fully rechargeable in 100 minutes, with runtimes of 215, 160 and 95 minutes depending on the settings, and it features wireless Bluetooth to connect to a computer.

Overall, for the price, it’s a solid sex toy, but there are four downsides to note.

First, you need to purchase an extra Bluetooth adapter for online connectivity, so if you’re going for this and want to use the MirrorLife content, make sure to pick it up too. The second downside is the content only works on PCs, which just feels like a missed opportunity.

The third downside is the inability to use the content with a VR headset. We’re willing to bet you could finesse it through Bluetooth, but Lovense doesn’t list VR use as a feature. The last con, which to be fair is also a pro, is the fact the device is controlled through an app. You might prefer using the app-based controls over the device’s controls and the app enables your partner on a different continent to control your device, which is good. But, it does make showing your Mom your phone a heck of a lot harder.

But that being said, the Lovense Max 2 is a solid VR sex toy (with limited connectivity and content limited to PC users) as well as a more affordable option for long-distance partners.

If you’re looking for a VR sex toy that offers some sleeve interchangeability, then you’re going to want to check out the Fleshlight Launch.

The device is basically a machine that locks in a Fleshlight masturbator and moves it up and down to stroke you according to settings you can adjust on the sides of the device. That being the case, it doesn’t come with any kind of sleeve, unlike the previous options, so you’ll also need to buy a Fleshlight sleeve and case to use this device. (Most sleeves comes with cases.)

As for the Launch itself, it’s ultimately not too complicated, but we’re certain it’s years ahead of your hand. The design is fairly sleek, if somewhat big at 12.75 inches tall, and Fleshlight claims the Launch can reach up to 180 strokes per minute. The Launch is also rechargeable via USB, includes free software upgrades and wireless Bluetooth connectivity and is compatible with FeelMe.com and your favorite VR headset or smartphone. Fleshlight actually used Kiiroo’s technology to help make the Launch, so if you trust Kiiroo, you can trust the Launch.

Once you’ve got the Fleshlight and the Launch, you can expect a more or less full automatic experience whether you decide to synchronize it with VR videos or not.

However, we must note that Fleshlight plans on discontinuing the Launch device soon and the Launch no longer appears on FeelMe’s website, so be aware you may lose some VR capability down the road, though the device itself will still stroke just fine.

If you’re looking for something similar, Fleshlight also offers the Quickshot Launch. It’s a redesigned device meant to do the same things as the Launch, except it’s compatible with Fleshlight’s Quickshot masturbators instead of its full-size masturbators.

There are some hardware differences, like the Quickshot Launch being both battery-powered and outlet-powered. It can also stroke faster, up to 250 times per minute, and the top of the device features a universal smartphone holder so you can enjoy your media while enjoying the device. Unlike the bigger Launch, this device isn’t compatible at all with additional videos or media, but it is $10 cheaper, at least. 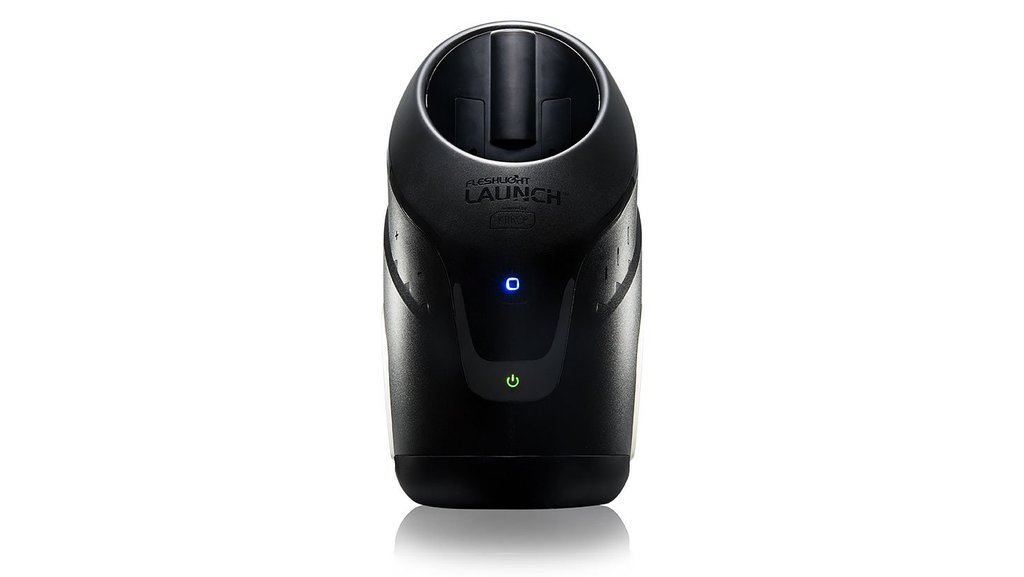 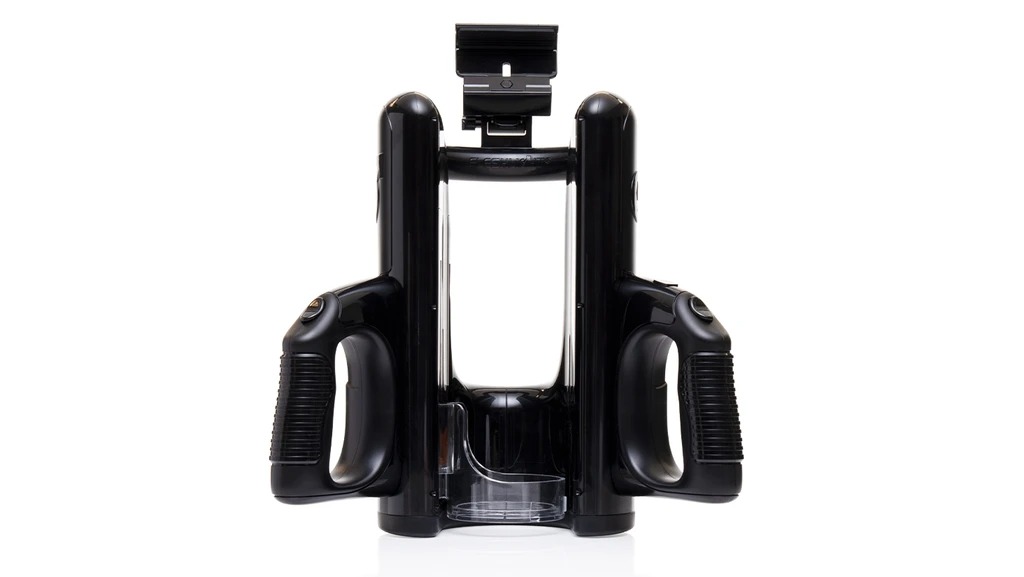 This high-quality toy makes use of two motors and 10 sensors to help use what Lelo calls SenSonic technology. Instead of vibrations, the device makes sonic waves that create a rippling, resonating sensation all over you. It also incorporates what Lelo calls Cruise Control, which can boost the power of the motor to compensate for any resistance you might cause and help maintain intensity and avoid any unarousing fits and power drops.

As for the device itself, it looks about as modern as a sex toy for men can look. The body is textured aluminum and makes use of curved internal grooves for additional sensation, and a window panel adds a whole new angle to the experience too. You can control the F1s Red through a three-button interface designed for one hand or through the Lelo app, which can also track your performance and usage. Lastly, it’s fully waterproof and USB-rechargeable, with a runtime of two hours on a full charge, all of which is majorly convenient. 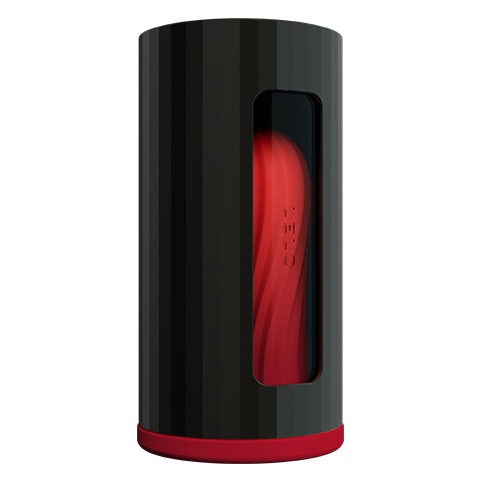 The device is powered through a plug, which makes it less portable but you’ll never have to worry about battery power or the device accidentally turning on. It also doesn’t feature any connectivity, so it’s just you and the device.

But it’s the technology inside the machine that makes the Autoblow A.I. a winner. Most stroking devices tend to have two settings: speed and intensity. While that totally works, there’s no way to deliver stroking variation. That’s exactly what the Autoblow A.I. does differently. 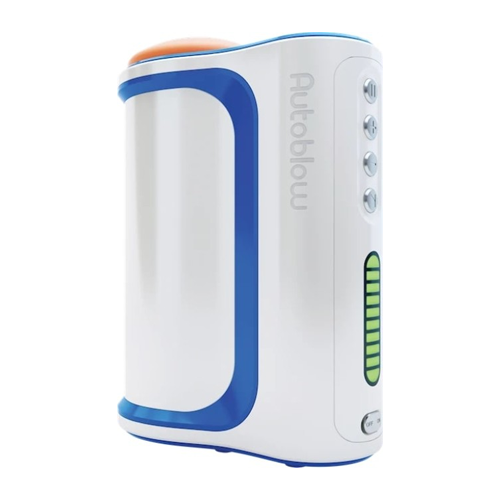 Virtual Mate, a self dubbed “virtual intimacy system” is hailed by many as being one of the best VR sex toys on the market today, and is the first human-pc interaction interface. This complex system creates a virtual mate based on any virtual character or celeb that gives Virtual Mate permission. With three modes to choose from (Fast, Story, and VR), this software comes with a realistic silicone sleeve.

Over time, your artificially intelligent virtual mate grows more real, replicating a real person. This product is seriously pushing the boundaries of visual realism and life-like interaction, with impressive real-time responses to strength, speed, and depth. If your goal is to go as realistic as possible, look no further. 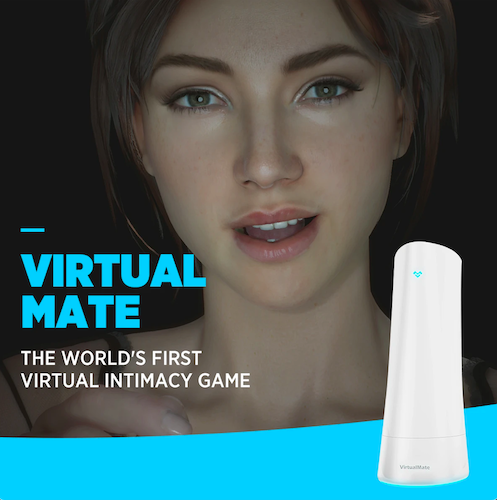 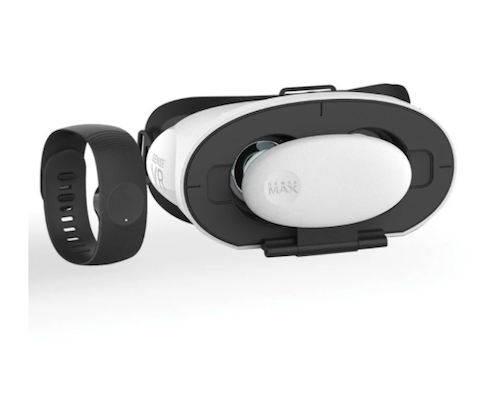 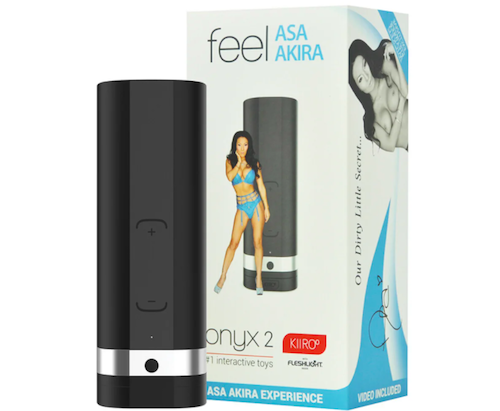 The Keon & Feel stroker, created by VR sex toy innovator KIIROO has incredible grip control and an extremely ergonomic shape that makes it feel more natural to use. This stroker is compact but packs quite a punch, and is one of the most versatile toys on our list, as it can connect to a range of other toys, and lots of interactive content (including everything on feelme.com), as well as interactive webcams. It can also reach an impressive speed of up to 230 strokes per minute. 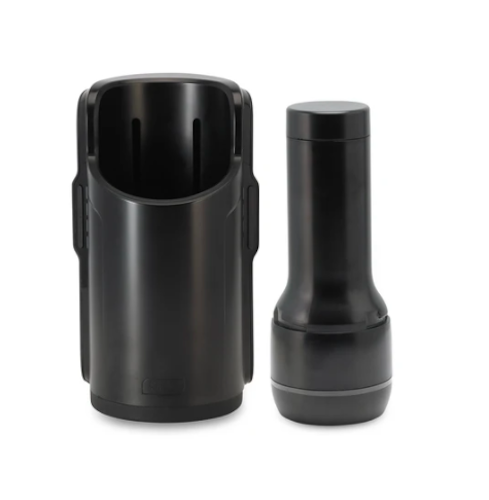 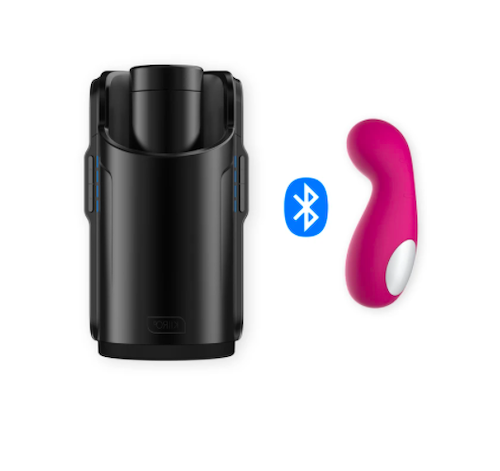